With the traditional wedding season upon us this August, we take a look at the evolving nature of the Polish wedding style… By Małgorzata Krakowska

Polish weddings have always been festive and sumptuous. Traditional weddings could sometimes last dozens of days, and were seen as marking the transition from youth to mature community life. This transition is symbolized by Polish wedding costumes and customs.

“In Polish tradition, weddings are always a big celebration,” says Justyna Laskowska- Otwinowska, curator of the State Ethnographic Museum in Warsaw. Sat inside the museum’s auditorium, my intention is to learn more about Polish wedding traditions. “Veils and white dresses weren’t always a part of Polish wedding tradition”, adds Klara Sielicka. White was seen as just another colorful element of the traditional wedding costume. She explains that peasants associated white with Christ and for this reason the wedding garments of old were never white or Western-looking. The costumes date back to 19th century. “Before 1863 [note: the year The Emancipation Edict of Peasants was decreed by Tsar Alexander I], they were relatively modest.”

After the peasants were freed from pańszczyzna [note: a form of the feudal duty; socage], their dress became more lavish and colorful. For women, the wedding costume featured vibrant skirts, white blouses and the most extravagant element: the headdress. “The wedding look differed, depending on the region and era. In Łowicz, women wore extremely decorative headdress during the ceremony,” Klara Sielicka tells me. 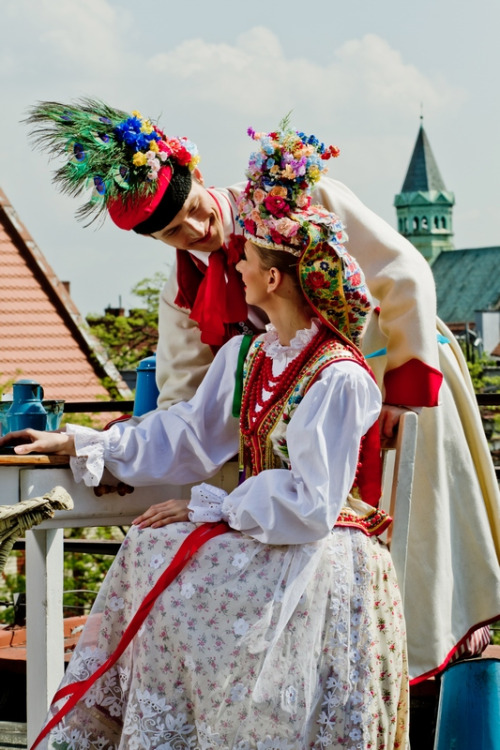 The making of such a headdress required a lot of work that saw all family members and neighbors participating. “It was a community event,” adds Klara. In Silesia, meanwhile, women grew myrtle that was made into flowery wreaths embroidered with green silk ribbons and wore by young bride at the wedding. “Brides also used to make a myrtle brooch for the groom, and hook it to his wedding suit,” adds Justyna.

One of the more traditional moments of the ceremony is known as the oczepiny – the removal of the bridal veil. “Taking place at midnight, the custom of oczepiny was the highlight of the event,” says Justyna. “It was a very emotional moment and it symbolized a very real moment of transition for the young bride: she moved away from her family home and into the life of a newlywed.” 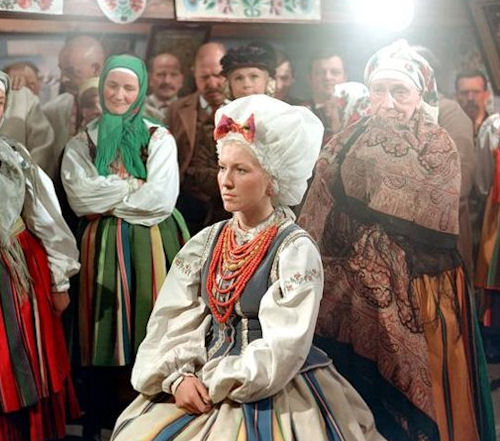 Photo: Shot from the movie “The Peasants” (1973; Directed by Jan Rybkowski)

The details of the ceremony differed from region to region. “In eastern parts of Poland, women’s hair was cut, while others featured a very symbolic unbraiding of bride’s hair”. Taking the floral coronet off was a ritual that involved other women from the community and, afterwards, the young bride received her first marital coif. The ceremony was accompanied by dirges that were sung by the bride’s sisters and girlfriends, after all, getting married was not always a happy moment for the bride: it was a farewell to her youth…