16 Things To Love About Solec

riverfront34 sightseeing75 solec6 street art31 weekend133 wisła39
Get… Your Fill Perhaps not as bewildering in choice as neighboring Powiśle, Solec nonetheless offers some of the most standout dining choices in the...

Though less high profile than the noisy neighbor that is Powiśle, Warsaw’s other key riverside district has charm in abundance: so let’s see Solec!

Get… Your Fill
Perhaps not as bewildering in choice as neighboring Powiśle, Solec nonetheless offers some of the most standout dining choices in the city. 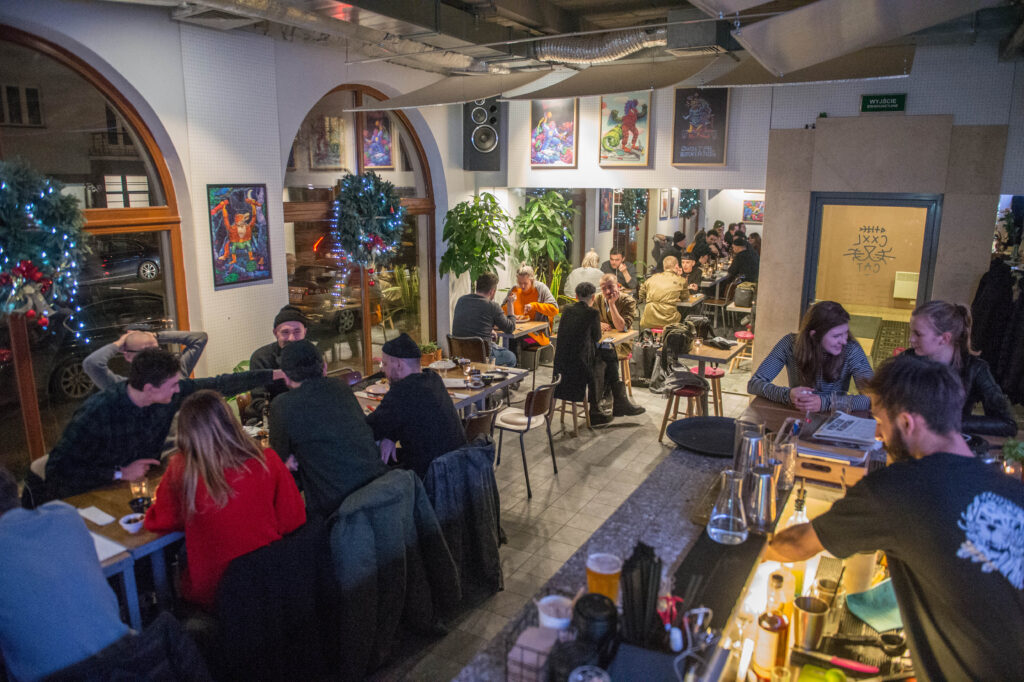 In this, Rozbrat 20 and Dyletanci play a large role, though shout-outs also go in the direction of such venues as the meat-centric Byk Bar, Hispanic-themed El Botellon, the wacky Cool Cat, riverside Ogrody Wisła and the fun Asian cuisine of Mr. Oh. 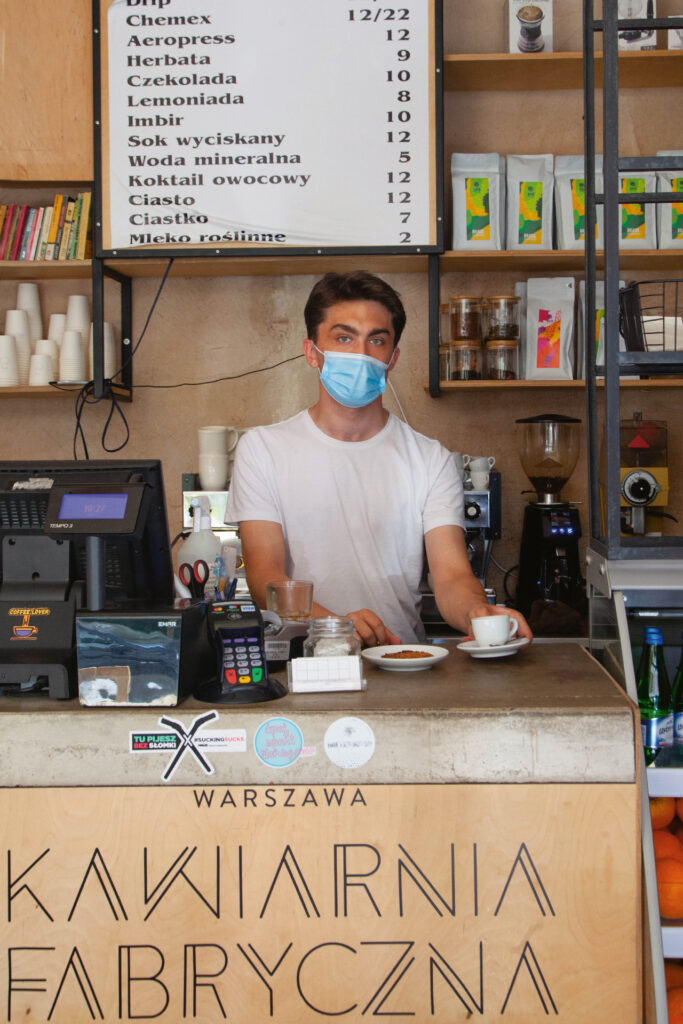 Know… Your Coffee
Solec lacks choice a little when it comes to new wave coffee, but who needs it when you have a hero like Fabryczna to turn to. Warm and atmospheric, think of this wooden-fitted café as the king of local chillout. 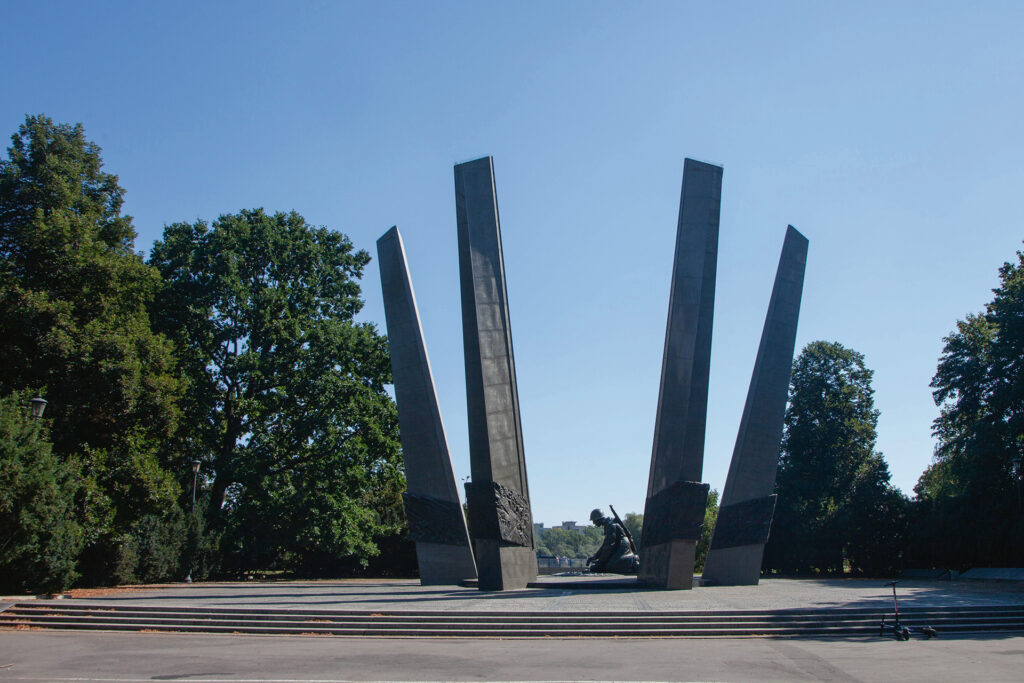 Glory… To The Sappers
Surrounded by six pylons that mimic an explosion, the Glory to the Sappers Monument at the top end of Edward Rydz-Śmigły Park depicts a kneeling sapper disarming an anti-tank device. Seventeen meters at its highest, the memorial lists the name of all those that died while rendering post-war Warsaw safe from German booby traps. Visit at dusk when sunlight streams through the different elements to stunning visual effect. 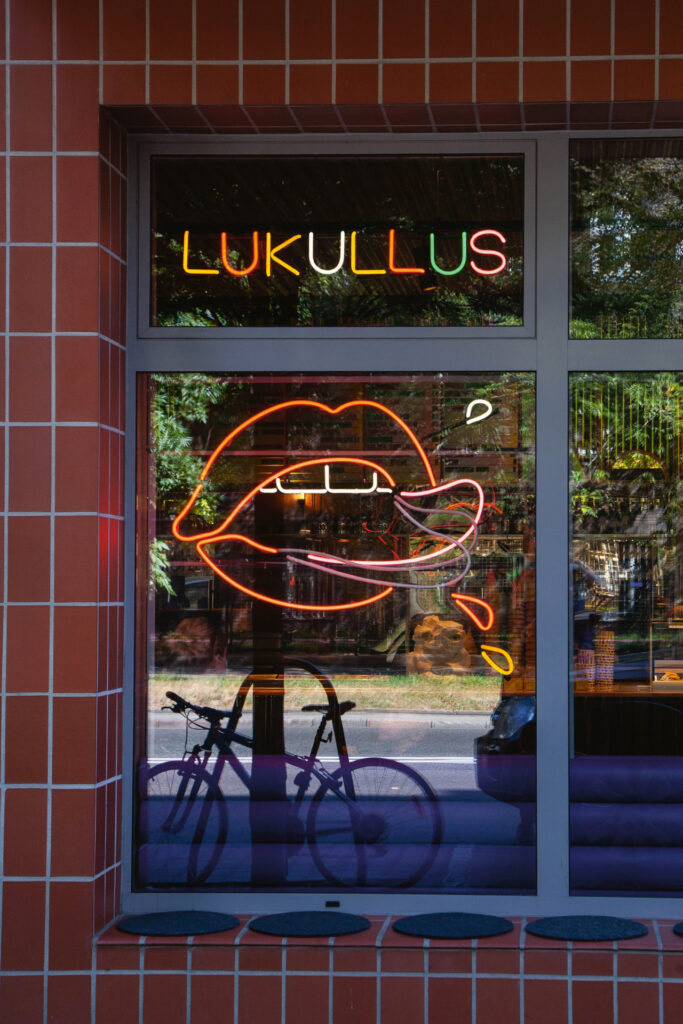 Spot… Some Neon
How cool a district is can be measured by its headcount of retro-style neon – there’s no shortage of it in Solec with the Insider fave being the softly suggestive tongue at the beautifully designed Lukullus St. Tropez. 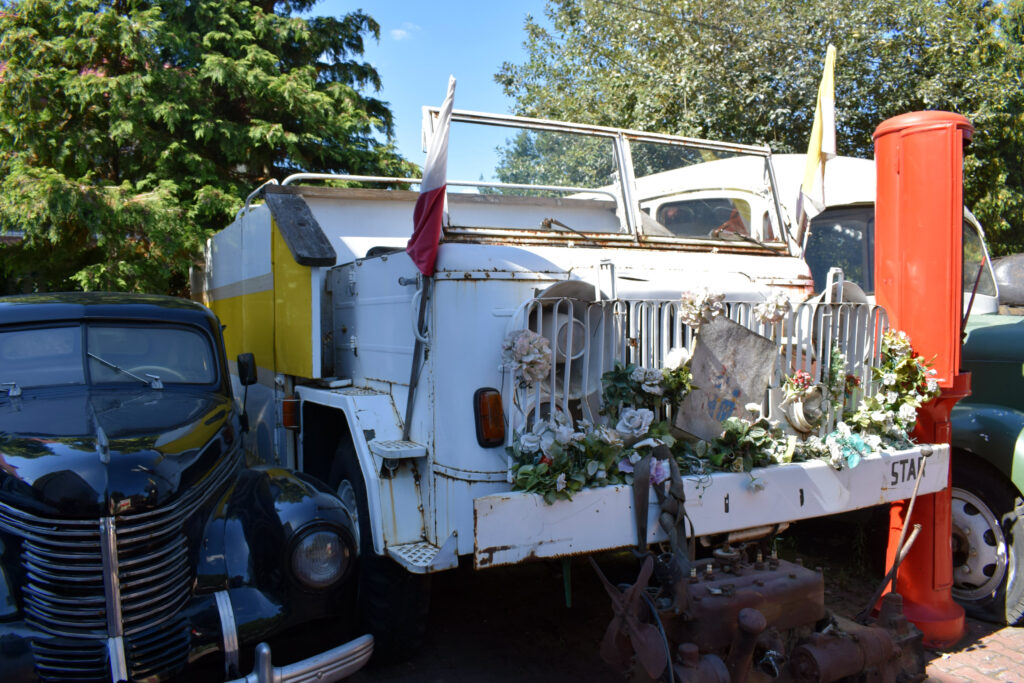 Walk… Trasa Łazienkowska
Stretching eight kilometres in length, Trasa Łazienkowska was the first ‘urban expressway’ in Poland, and enthusiastically promoted as proof of the futuristic socialist vision. Opened in 1974 by First Secretary Edward Gierek and the Soviet leader Leonid Brezhnev, it was considered such an engineering feat that it was included in open top bus tours by Orbis, the state travel agency – yep, Communism really wasn’t any fun. Random fact: Pope John Paul II crossed the bridge in 1979 in a delivery truck that had to be hastily converted into a Pope Mobile (as now displayed in the Car Museum out of town!). 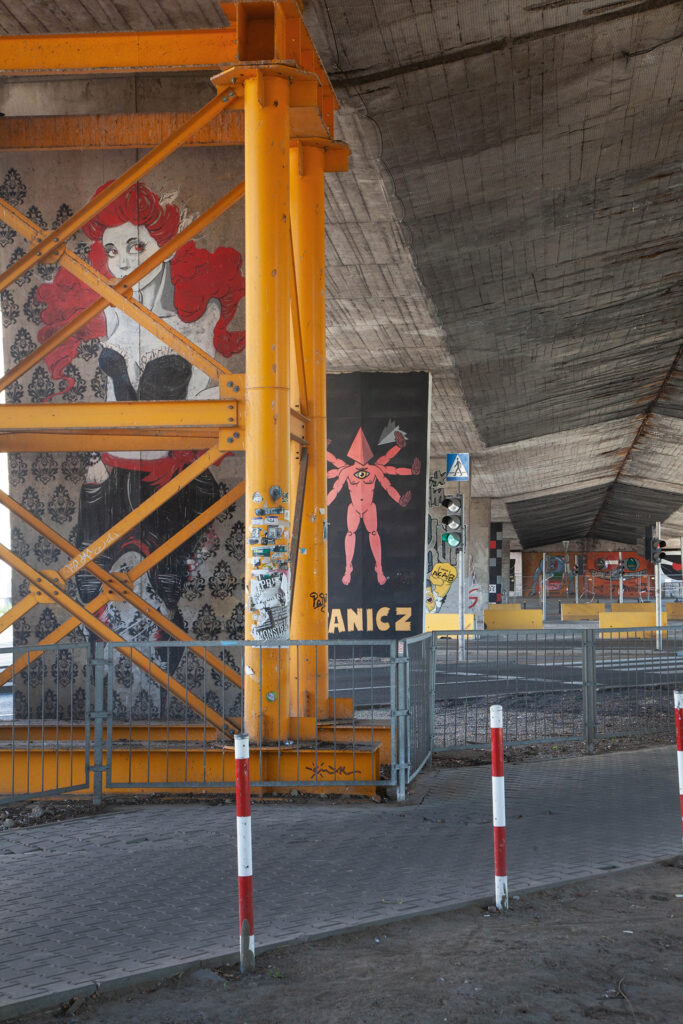 Check… The Street Art
The Łazienkowska underpass by Legia’s stadium has long been regarded as something of an open air graffiti gallery, a reputation gained long before the walls of Warsaw became a canvas for street art. While the location has naturally meant a high proportion of tribal football markings, other more experimental works can also be viewed. And bearing in mind the dank, murky backdrop, the art somehow feels all the more raw and visceral for being here. 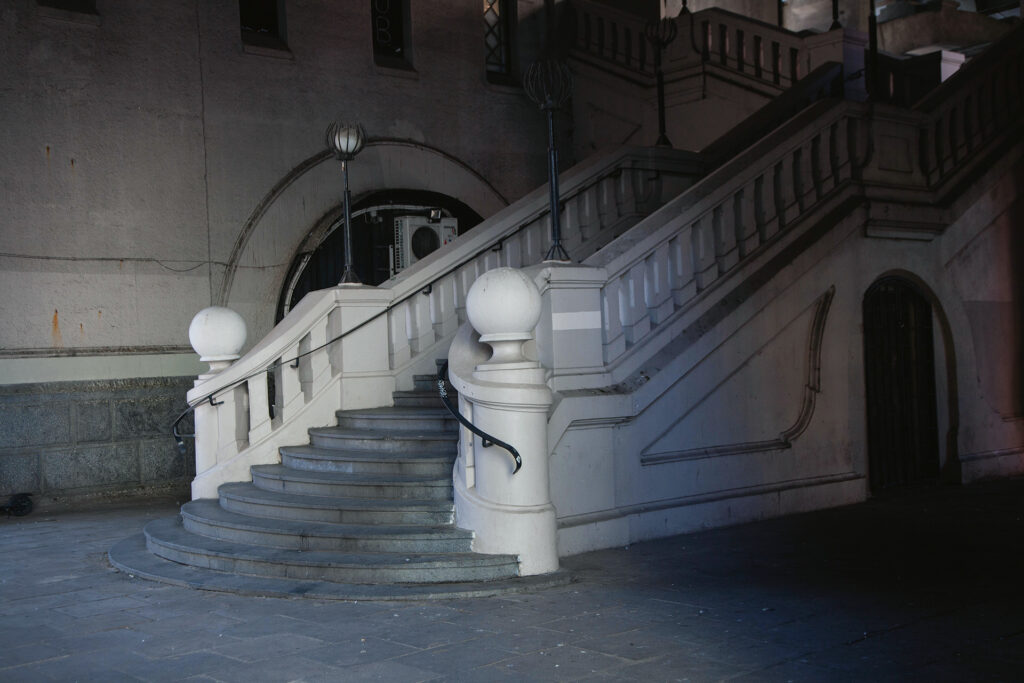 Cross… That Bridge
Embellished with turrets, pavilions and ornamental lamps, there’s no doubting the imperial majesty of the Neo Renaissance Poniatowski Bridge. Beautiful as it is, it also earns sympathy in spades: over the course of history it’s collapsed once, been burned down another time and blown up twice. As if that wasn’t enough, in 1926 it was the scene of a coup after Marshal Józef Piłsudski and President Wojciechowski held failed talks on the bridge to discuss the future of the nation. Phew! 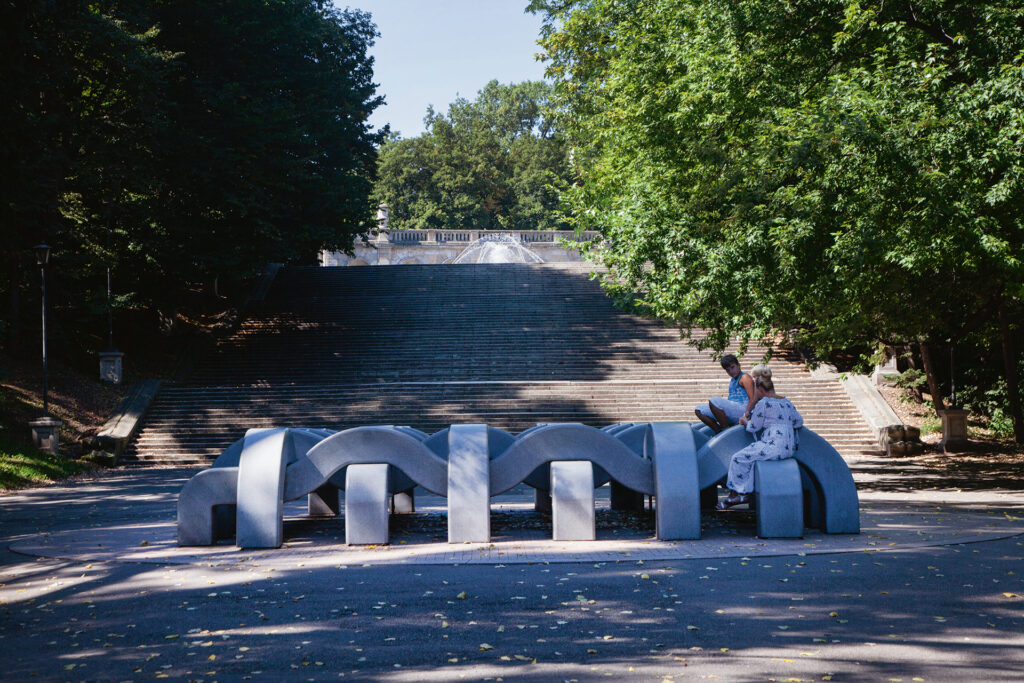 Prowl… The Park
Forming the green buffer zone that runs between Górnośląska and Most Poniatowskiego, Edwarda Śmigłego-Rydza Park was built over war rubble and followed the vision of landscape artist Alina Scholtze and her team of helpful munchkins: over 15,000 school children volunteered to help create this space, planting some 10,000 trees and 60,000 shrubs while music bands tooted in the background. Once home to the city’s first ‘dance café’ and a circus, nowadays attractions include such public art as the 60-ton Unity, an installation donated by Chicago-based Poles.

Give… Peace A Chance
Found in Edwarda Śmigłego-Rydza Park, look out for a three-meter statue depicting a girl holding the dove of peace. 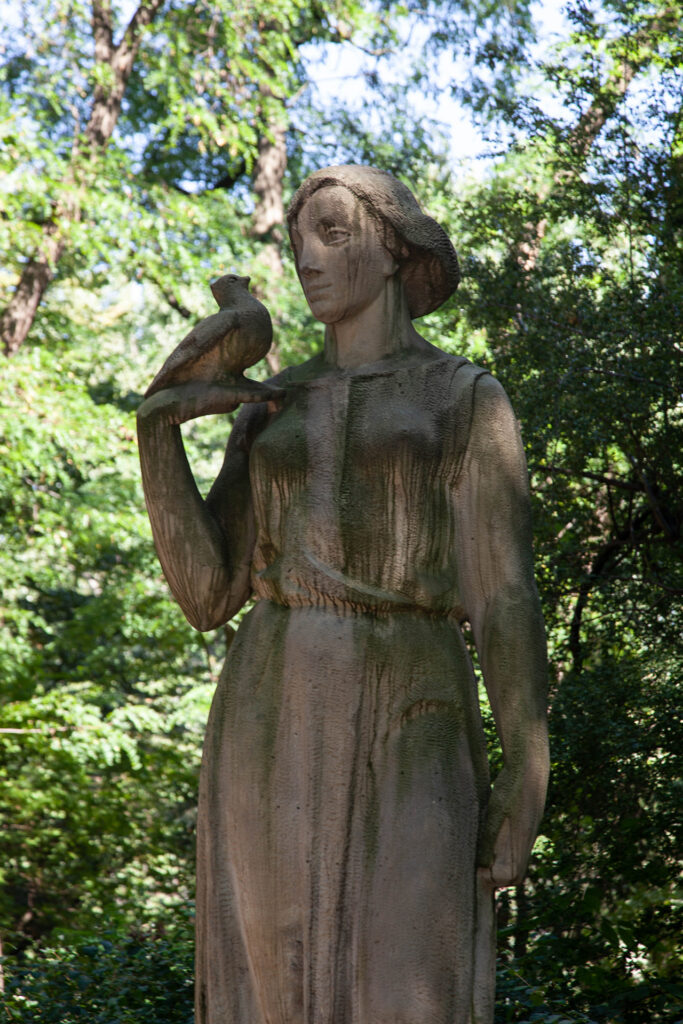 Completed in 1957, four years after the death of Stalin, it was one of the last works in the style of Socialist Realism to be erected in Poland.

Take… The Stairs
Entered via a wrought iron gate snuck away on Myśliwiecka street, ul. Profesorska was laid out in the 1920s with its steep, plunging stairwell lined with villas earmarked for use by local academics. 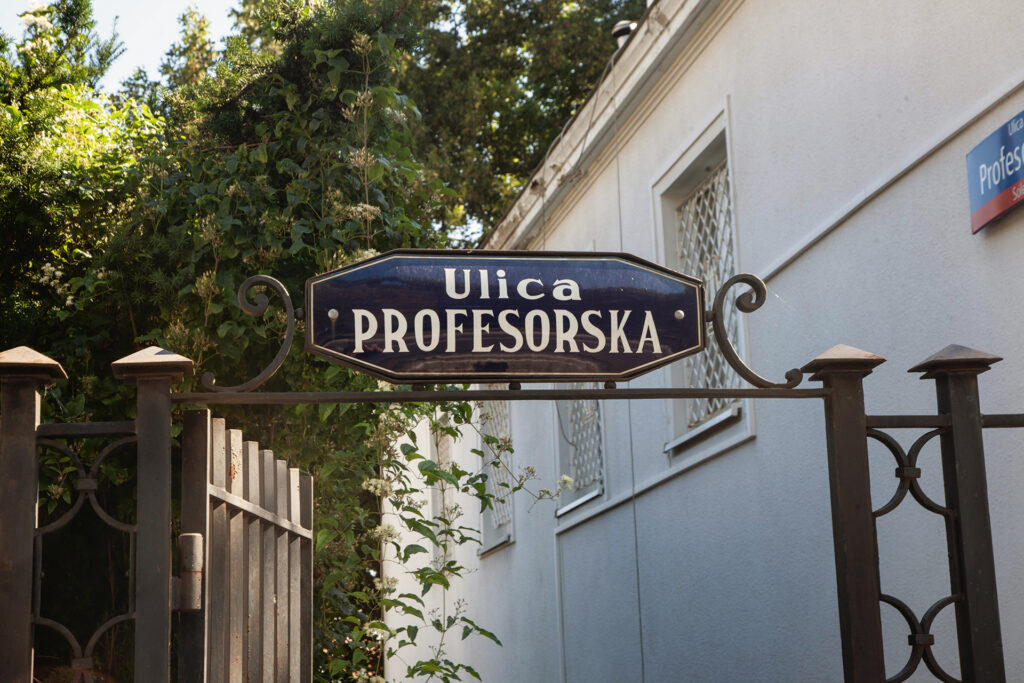 Surviving WWII intact, this pretty little street was inspired by the same philosophy applied to the garden cities that were so popular during the inter-war era. A place of quiet charm, it’s one of Solec’s best-kept secrets.

Visit… The Orient
In this day and age, that means doing so the safe way: by stepping into the Museum of Asia & Pacific. 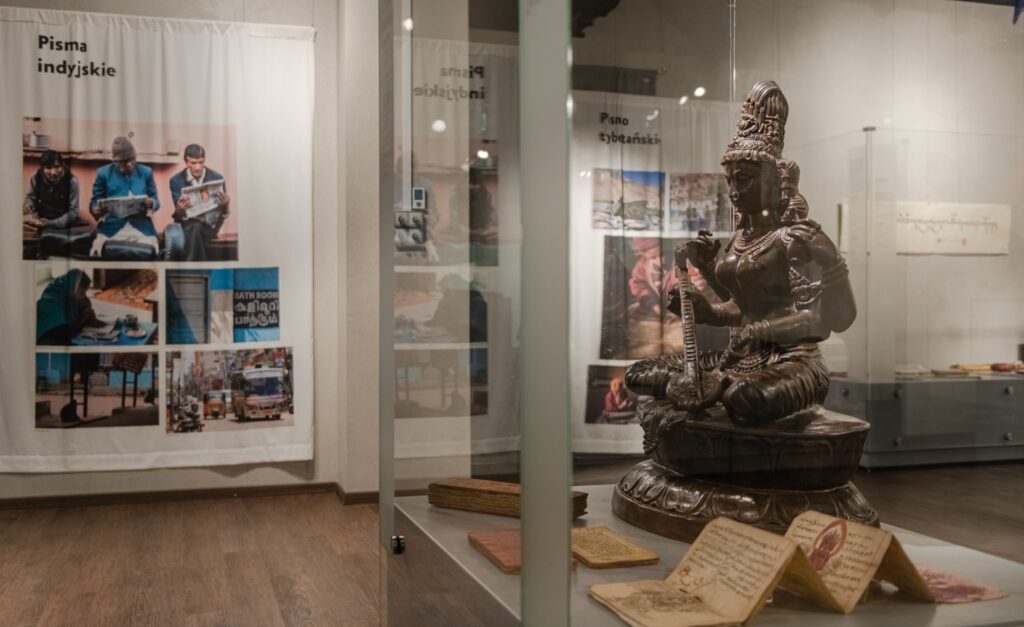 Among the collection of exotica find a beautifully assembled and presented collection of 120 musical instruments that are simply jaw-dropping to admire.

Enjoy… The Last Of The Summer
Autumn’s coming to get ya’. But before temperatures dip, September affords us one last chance to enjoy the final days of summer – and in Warsaw’s case, there’s no better place to do so than on the swanky riverside boulevards. 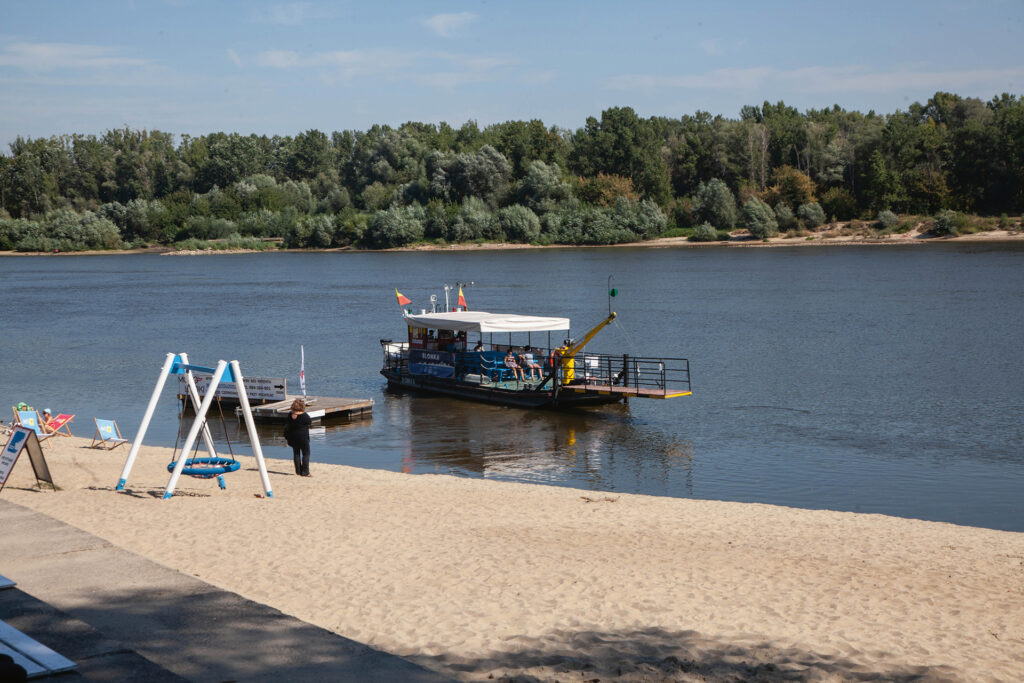 Whether on food, on rollerblades, on bike or one of those damned stupid scooters, the so-called Bulwary are a joy to explore no matter what time of day. 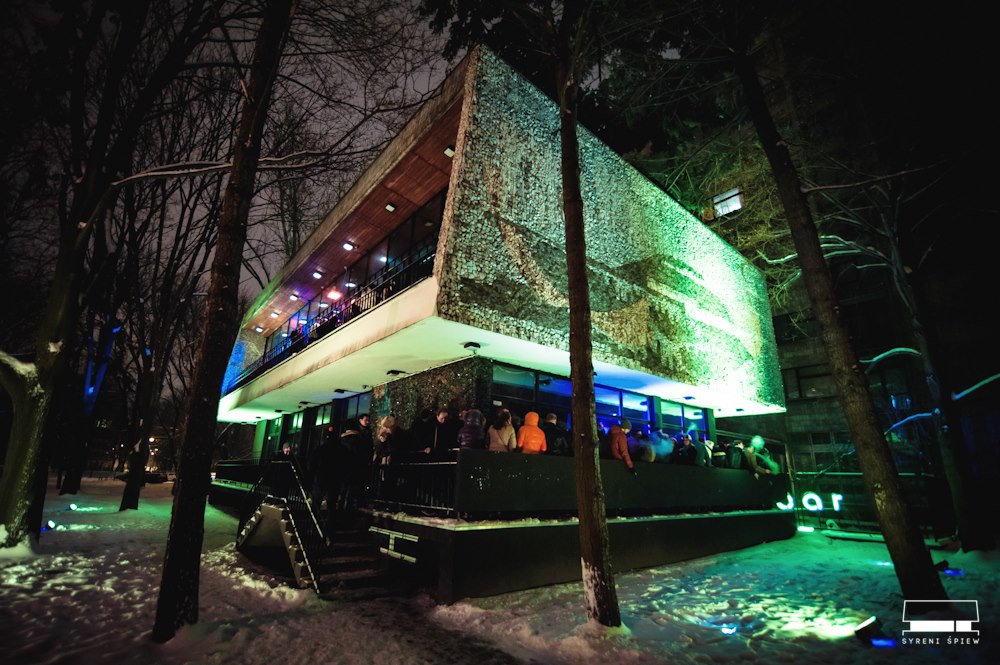 Remember… That
Found in the very bull’s eye of Śmigłego-Rydza Park sits the forlorn form of what once served as the original Syreni Śpiew before their move to Praga (pictured above in its full party pomp!). Looking more like an abandoned military bunker, the flat oblong building was once a socialist showpiece canteen, elegantly decorated with complex mosaics and abstract compositions. Only narrowly averting demolition following a public outcry, this beautiful gem of post-war modernism stands as if silently screaming for a tender restoration.

Gaze… Up
Appearing like falling Tetris blocks, the trio of 16-storey towers that comprise the Torwar Estate were intended to be complimented by a further duo of 24-level high-rises to act as a visual counter-balance to the Palace of Culture. 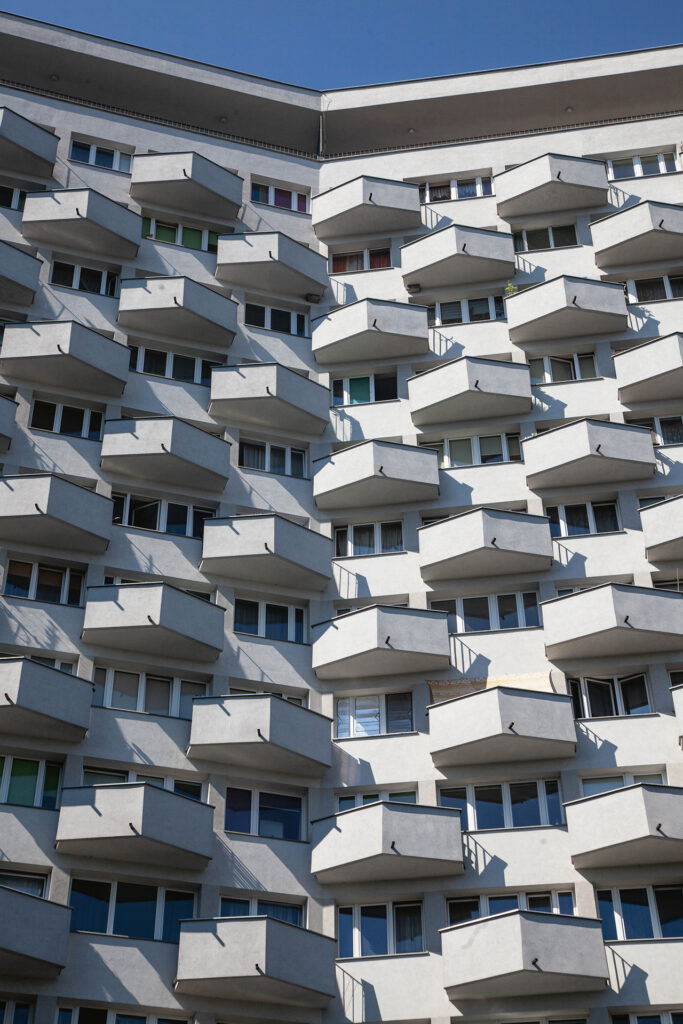 Noted for their pointy balconies and inverted shape, the hulking structures were designed in the 60s by the prolific Oskar and Zofia Hansen and are a curious paean to the aesthetics of the age. 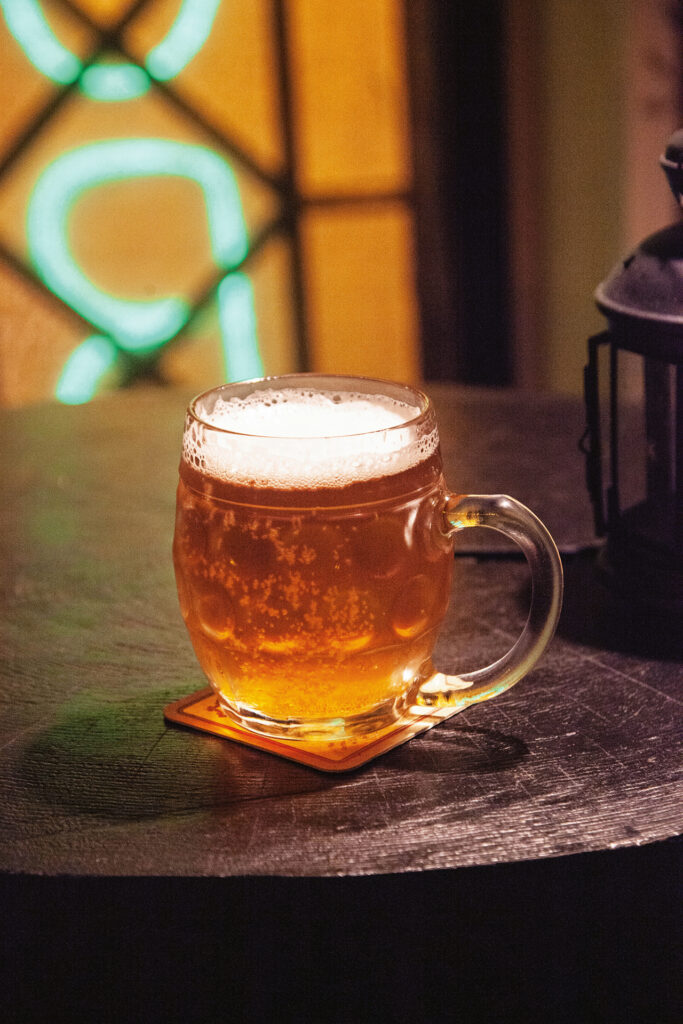 Drink… Inside A Bridge
Not many crossings offer that opportunity, so use it to the max. When it comes to Solec that means exploring the guts of Poniatowski Bridge where, among various options, you’ll find the jovial Czeska Baszta serving frothy pints of imported Czech beer, the craft inclined, tavern-style Pod Mosteczkiem, and the wild and cool Mr. Oh. 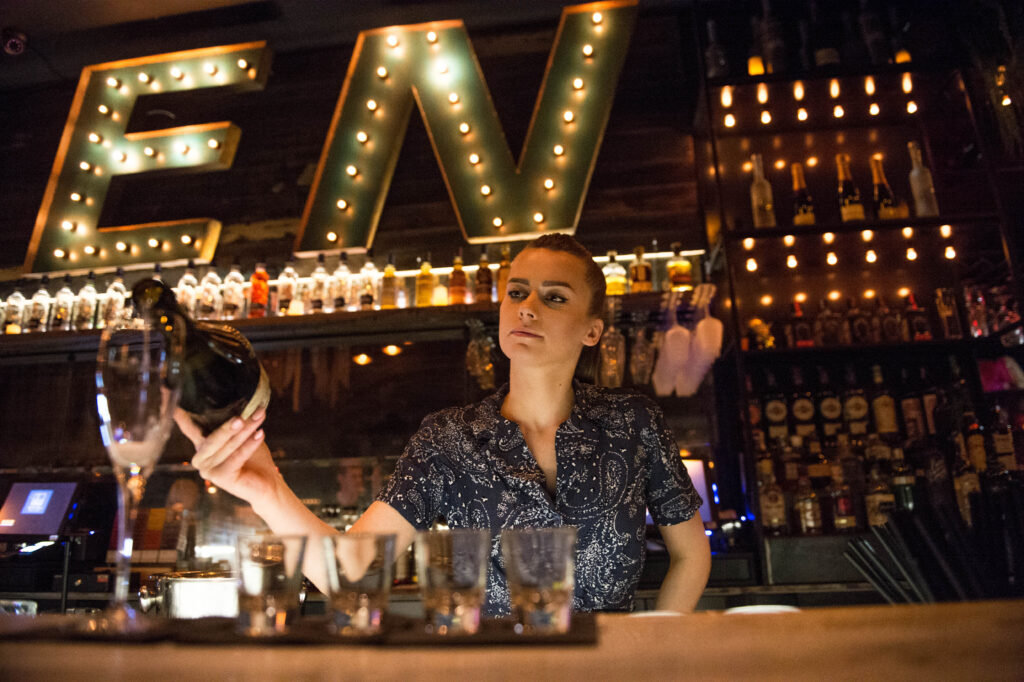 Take… Your Last Chance
Last chance for what!? To party on the Wisła, of course. Though the Solec end is no longer as raucous since the demise of Cud Nad Wisłą, the summer could have been a whole lot worse. If nothing else, dress your best to toast another day of life from the rooftop deck of the inimitable Sen. Surrounded by the glam and the glorious, there’s no better place to watch the sun set over this summer to remember.