Warsaw-based artist Dawid Majgat talks about Republic ¥, a preposterous, self-invented parallel world inhabited by monsters and other creatures of his imagination. 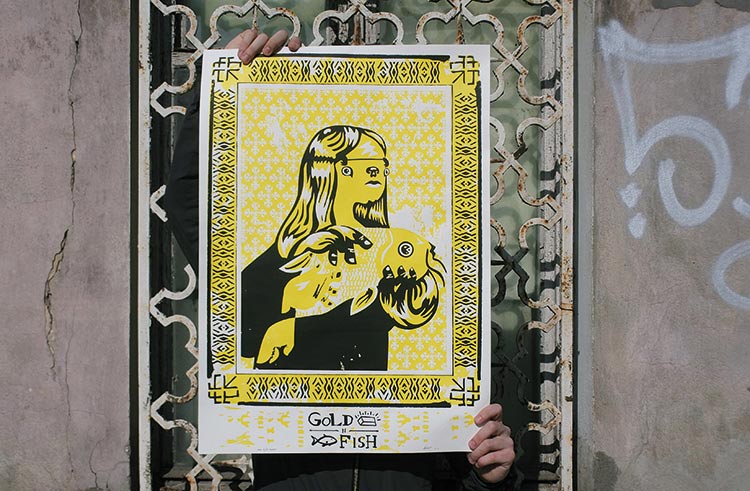 The Artist’s Statement
“The concept of Republic ¥ envisions a colonial state in which the citizens are monsters. This absurd world acts as a sandbox, giving the freedom of working in many different medias such as painting, illustration, design, sculpture, animation, film, gaming and literature. Working in the realm of this mysterious country, I look to comment on the surrounding world by showing it in the distorted mirror of my art.

By creating the culture and art history of this imaginary land I am able to freely comment on and relate to everyday issues, popular culture, traditions, history, politics and eternal values, whilst also being able to reinvent and discuss the structures and mechanisms that steer our world. Following the notion that every man has his inner monsters, the concept that binds the whole project together is monst-art aesthetics and the colonial state.” 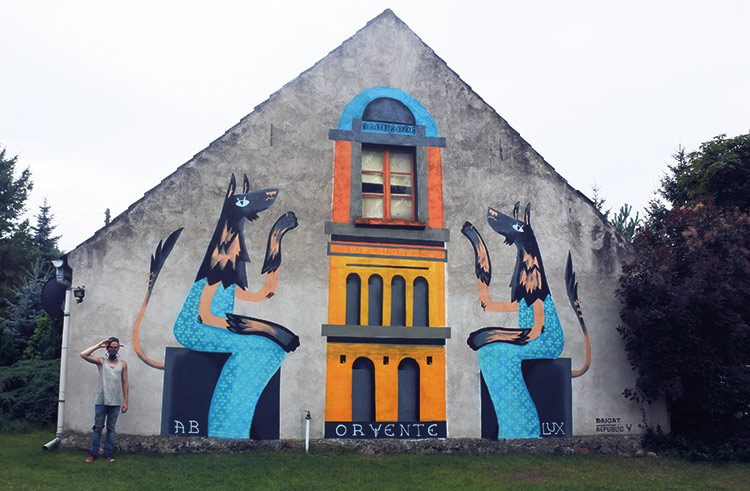 What were the beginnings of Republic ¥?
First came the monsters. I used to draw them randomly all the time in my sketchbook but had no idea what do with them or how to take them further. Then, during my Food is Good exhibition, I got the name Republic ¥ in my head. From that moment I knew that if I could just create an artist’s statement I could join the two together and then use them how I wanted. Basically, the monsters are my identification key; they’re the bricks of Republic ¥ and with them I can build what I want.

What’s the significance of ¥?
First, it alludes to Generation Y, which is the generation I’m part of – the first generation to grow up with computers everywhere, but the last generation to grow up without an iPhone in the cradle. Then, there’s the similarity to the Chinese Yuan symbol, a currency that’s trying to overthrow the dollar. Finally, I think Y asks a lot of questions which is how I want people to react to my art. I don’t want to say black is black or white is white. I want people to interpret my art in whatever way they wish. 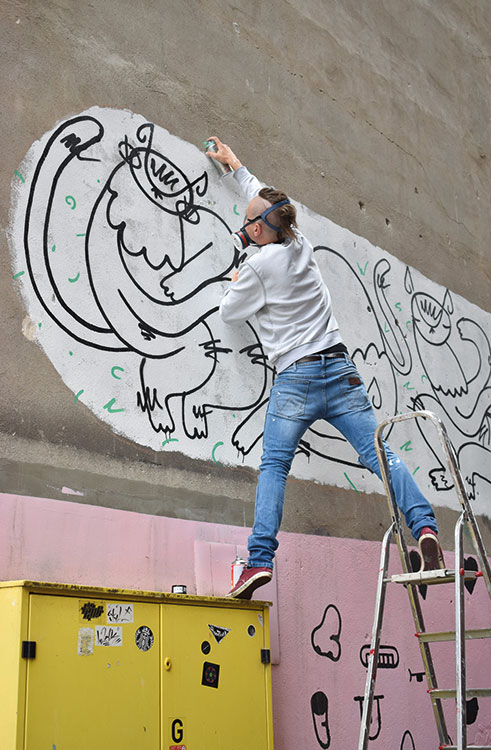 Do you have any favorite monsters?
I love all my babies, even the ugly ones. Sometimes I feel I use some characters a little too often, but I prefer to use monsters that have individual characters rather than ones that just make up the masses. In all, there’s probably around 100 with such characters, of which I probably use about 20 regularly. Though some are fictional, others are based in reality: for example, I had a Cocker Spaniel that died. She’s a little like Leonardo da Vinci’s Lady With An Ermine and has appeared in my work: by using her that way, I’ve kept her alive.

What other crossovers has your work had with reality?
I’ve got a close friend whose always late for everything. Anyway, one time he was running late to catch a plane to Spain and ended up having to ditch his luggage in an airport restaurant in order to make the final call. A week later he asked me to try and find it for him – he couldn’t even remember the name of the place he’d left his bags. It took me ages, but I eventually found his bags. I was hugely annoyed with him, but I channeled that anger to create a poster for Republic ¥’s official airline, Primus: the most delayed airline in the world. 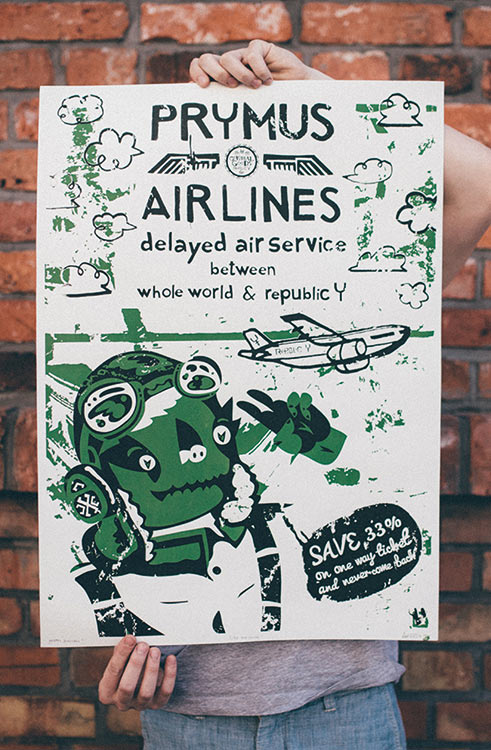 What’s the future of Republic ¥. Will it ever crumble and be replaced by something else!?
This project is full-time. It’s my life’s work. I view it almost as if it were an escape from my real country’s issues – an insulation from the problems of Poland. Certainly, I want to develop the idea further and design products related to it, and even open a factory producing Republic ¥ goods.

Does Warsaw inspire you?
Of course it does. I grew up in Gorzów Wielkopolski, which essentially was a German city repopulated after the war by Poles from the East. Living there felt like being in a rootless mind-trap, one that I felt I had to escape. Warsaw couldn’t be more different. Every wall has a history: the bullet holes, the Socialist Realist buildings, the wild 90s architecture, the buildings that came from messy capitalism or those that speak of a new world order. Warsaw is a city of movement and noise, and seeing that gives me energy. Here, I’ve felt like I’ve had my roots returned. I’ve utilized all these feelings to build Republic ¥. 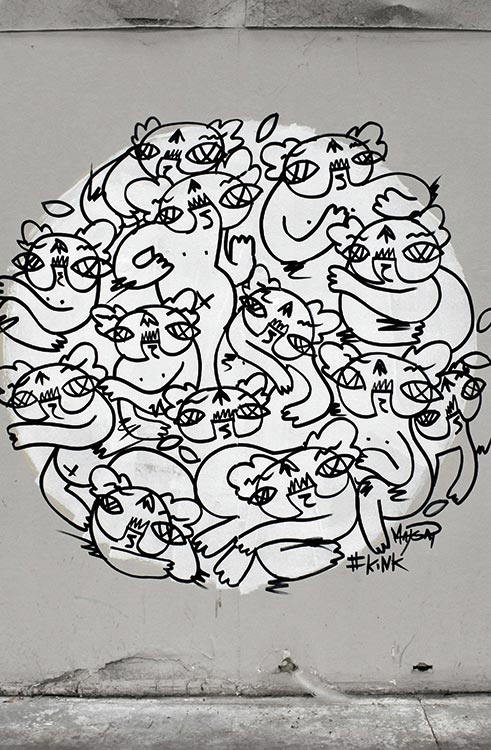 Was there a key moment when you decided to pursue life as an artist?
Finishing art school most students are left with a choice with choosing life as an artist or moving into graphic design. I faced the same choice but, having sold a few works, I decided to take the risk and develop my art career.

How important was the formal education?
It’s absolutely not necessary if you want to become an artist, however, I found it very useful. Art academies are very quite conservative and they will teach their own philosophy. Not only did that give me a straight line of concentration to follow, it also gave me something to rebel against as well. My Gold’n’Fish series shows my dialogue with History of Art; it’s my way of healing myself.

How do you fit into the artistic life of Warsaw?
It’s a big city so art here has many faces. You’ve got the ‘official art’, then ‘underdog art’ which is where I belong. I’ve never exhibited in a white cube gallery and the thought doesn’t really interest me. I like spaces that expose my art to completely random people, so bars, cafes, walls, etc. I don’t want to be an artist for people who are only interested in gallery life, I want to be an artist that’s seen by everyone. That’s why I love crowded places.

Dawid’s work is currently on display in Pies Czy Suka and Między Nami. For more on the artist and his work, visit: majgat.com