Jaded by your more typical wine tastings, the Insider discover a course that’s in a glass of its own…

Let’s be honest, we’ve all done it: ended up at a house party chugging back wine in the style of a student – from a paper cup or a broken-handled mug with coffee rings on the bottom. Remember how it tasted? Depending on the high jinx, probably not, but it wouldn’t have been good. Quite possibly, it may have put you off wine for life. Put simply, the vessel matters, and it’s a point that goes further than just using a well-polished glass that cost a pretty penny. Finally, though, Warsaw is starting to take note, and to that extent a degree of gratitude is owed to Piotr Kamecki.
President of the Polish Association of Sommeliers since 2005, it’s at his latest venture, Wine Taste by Kamecki, that the Insider meets him. A chic spot, operations are directed from a stylish room that houses the biggest selection of Bordeaux wines in the country: both in number and depth. Yet this is not simply a shop. While customers searching out a good bottle for dinner are welcome, Kamecki is clear that his target group are those looking to fulfil more extravagant orders – and for him that doesn’t just involve sourcing big batches for ambitious oenophiles, but also designing cellars. “Last year,” he recalls, “that included a 5,000 bottle cellar for a private enthusiast.” It also means education. 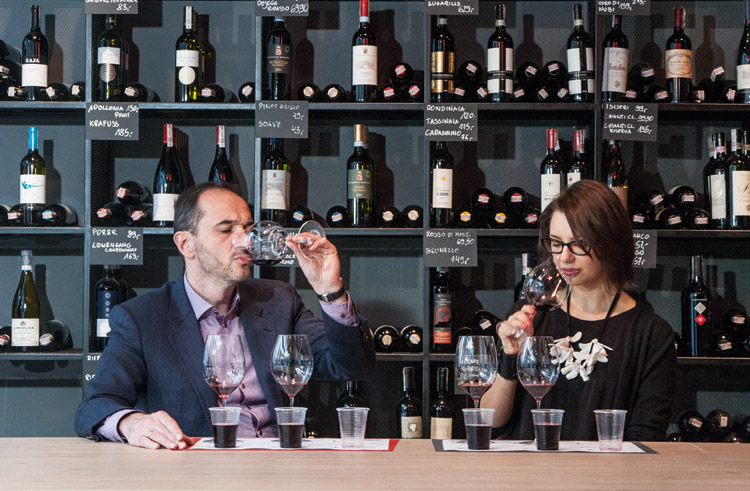 “I want this to be seen as a tasting showroom,” he emphasizes, “which is why the focal point is the table.” But while traditional tastings feature heavily, it’s the ‘glass tastings’ that have become the must-try. “I aim to show what a glass can give or take from a wine,” says Kamecki. “I hear people complaining that they didn’t enjoy a certain Pinot Noir, and of course, sometimes that’s because it’s a bad wine, on other occasions it’s because it’s been served at the wrong temperature, but mostly the fault lies with the wine glass – you’ll see that here.”
Taking around 40 minutes, the tasting involves pitting regular plastic cups against glasses produced by the Austrian manufacturer Riedel. “There’s around 10,000 grape varieties,” says Kamecki, “and I realize that’s beyond the comprehension of most customers, so we usually run with three different wines that most will be familiar with.” These include Pinot Noir (“a thin-skinned grape responsible for delicate and demanding wine”), a Cabernet or Merlot (“a thick red wine, very dry with a heavy aroma”), and then something in between those two like a Syrah or a Shiraz.
It’s here that the games begin, with the wine poured first into the plastics and then into the three glasses, each of which has been individually designed to enhance varying types of wine. For skeptics, like myself, it doesn’t take long to realize that this glass business isn’t rooted in hocus pocus snobbery. “Pinot Noir needs the perfect glass,” asserts Kamecki. “Without it, from the plastic cup, straight away it tastes acidic, bitter, there’s no smell. But in the good glass you notice its delicacy, its fragrance; you pick up the spices in the mouth. The shape of the glass is such that drinking the wine you avoid the acidity receptors on the tongue.”
And so it goes, with different glasses pronouncing subtle and not so subtle differences all connected with clever-sounding things like molecules and receptors. “If it sounds complex,” says Kamecki, “that’s because it is – but that’s why these classes place the onus on tasting, not talking.” Perhaps the biggest surprise is yet to come, for it’s not just wine that finds itself affected by the glass it’s served in.
“We can do tastings with spirits, water, champagne,” says Kamecki, “take Bollinger for instance. That’s based on the Pinot Noir grape, so if you drink it from a flute you’ll get a completely contrasting taste. It actually needs space, a big glass, otherwise I can best compare it to fitting an XL-sized man into a tight little waistcoat.” In fact, there’s even a Coca Cola test to experiment with. As someone who drinks more Red Bull than red wine, a fizzy drink challenge is immediately appealing. With a bottle acquired from around the corner, Kamecki wheels out another Riedel glass, this one developed last year specifically for the soft drink giant. “From the plastic cup Coke is filled with gassy bubbles, but this glass cuts those out. You can even find a faint aroma of orange peel and milk chocolate.” What next, I think, will the Kamecki pull a card trick? Sensing my disbelief he’s quick off-the-mark: “Don’t think of Riedel as a magician,” he states, “it’s all down to physics.”
With the tasting complete, and my mind scrambled by the impossibilities of it all, comes the last, parting shot. “If you want to enjoy top wine, you need a top glass,” says Kamecki, before delivering the mortal blow to tightwads all over: “and remember,” he says with a smile, “a good glass won’t make a bad wine good.” It’s not magic after all…