Warsaw is often seen as an insecure city, casting eyes on others and playing the copycat. Yet in the form of the untamed Wisła it has something truly unique to be proud of. 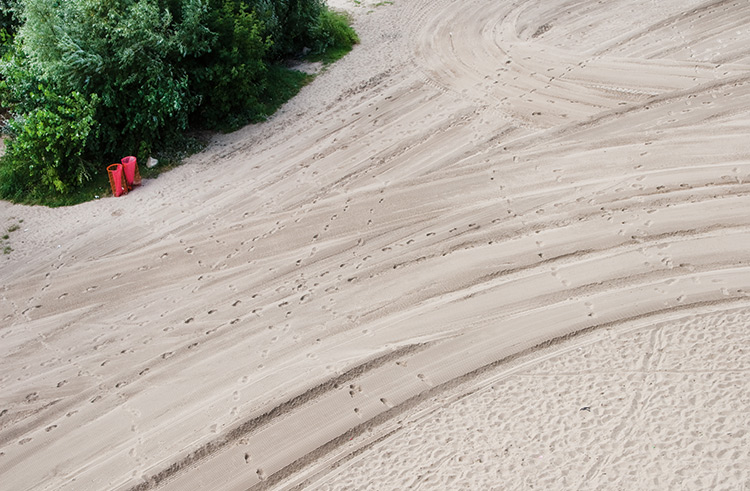 As apocryphal stories go this one reveals a lot about Warsaw, its river and personality. An American visitor to Warsaw’s mayor Hanna Gronkiewicz-Waltz, it goes, asks how much the city had spent on creating the effect of a wild right river bank along the Wisła in Warsaw. “It’s awesome landscaping,” he allegedly said. “Must have cost an arm and a leg.”

He wasn’t really to know, of course. It is very rare, after all, to have a wild river bank running through a capital city. Where development in New York, London and Tokyo may have been driven by commercial property prices with public spaces under threat, now often trying to look eco-friendly, 2-million strong Warsaw has had such a wild space right on its doorstep, by default, design and neglect.

The Wisła is a wild river with limited regulation and limited apparent ‘use’. “When you look at the river now, you are struck by how empty she is,” says Warsaw tour guide Jan Darasz. “The odd pleasure cruiser or icebreaker and a brave sculler or coxless four. That’s it.” It has several sandy beaches, which are used intensively during the summer days and on the outskirts, you even find a nudist beach.

“The Wisła has been a barrier separating Warsaw and Praga, some say Europe and Asia,” says Darasz. “There was only one permanent bridge in the 17th century and that collapsed during a severe winter. Thereafter there were temporary pontoon structures until the mid-19th century,” he adds.

“The Wisła, gradually from the 18th century, and dramatically from the late 19th century, shifted eastwards, creating the area of Powiśle. The islands and inlets on the left side were regulated by Dutch settlers in Saska Kępa, while the authorities tried to exploit the Wisła commercially by building Praga Żerański and Czerniaków ports on the left bank.” Development after the war was due to communist neglect. “They just continued the pre-war plans for boulevards and grand communications, for example the Wisłostrada.”

The Wisła has also been the main city sewer. The right-bank escarpment had magnificent gardens reaching down to the river’s edge but was used to push waste into the stream. “Powiśle later became a huge shanty town-cum-rubbish-tip in the 19th century. Little wonder that trendy Warsaw gradually turned its nose and back,” says Darasz. After the War, any attempt at revitalization seemed to be checked by increasing pollution upstream and the Włocławek sluice put paid to any river traffic which could ply the length of the river. The ports and the tourists faded away, victims of central planning. In 2006 though, the mayor promised to clean up the Wisła and eliminate the problem of raw sewage being dumped. Today Warsaw treats all its waste water and the Czajka sewage treatment plant is the largest environmental project in Europe to date, with funding from the EU.

The left-bank has been designated for culture with boulevards, cycle lanes and trendy cafes over a tunneled Wisłostrada, while the right- bank with its beaches and woods and wildlife will be the nature part. “This echoes the calls from the 1930s about turning back to the river and is a welcome development if it happens,” Darasz says, “but we shouldn’t hold our breath.” The Copernicus Science Centre is a mark of a changing Warsaw, a modern interactive educational center sat on the banks of the Wisła. “Our center is looking forward, it’s about progress, change and learning. Education is the key to the new Warsaw, and the emerging Poland,” says Robert Firmhofer, the center’s director.

A private sector example across the river is the Sauna project. Mateusz Adamczyk, a spokesperson for Budcud, which is building the Sauna development on the Praga side of the river says the Wisła is changing. “In Warsaw you have two different riverbanks, one which is wild and allows jogging, walking, sun-bathing, and the other is much closer to the city so is way more urban. That separation should be maintained, because then you can use the river in both ways, experiencing the wild or just hanging out in a cool spot. Sauna is both a cool spot but positioned in the wilderness.” Alas, the zł. 2 million Sauna project is currently on hold for financial reasons, a status shared by the ambitious Port Praski development.

Artists have also been drawn here. The Transformations Art Festival by the Wisła in 2009, organized by the Impact Foundation, was an attempt to reintroduce the river to the city. Elżbieta Jurkowska, Project Coordinator at the Impact Foundation, says the aim has been to bring tourists and the local community to the river banks and awaken their interest for cultural events held in abandoned public spaces.

“The green oasis on the Praga side is home to about 80 species of bird,” Aleksander Buczyński of environmentalist NGO Zielone Mazowsze says. Green areas occupy 28% of the city and the banks of the Wisła are inhabited by weasel and marten. Other wild animals in the Warsaw area include elk, deer, bobcats, beavers, otters and mink.

Funds from the European Life+ initiative help protect the bird habitat in the Central Wisła Valley. This goes hand in hand with ambitious plans to open up the river for the city. But Buczyński is worried that the planned upgrade of the road that runs alongside the Praga bank of the river will exacerbate an existing disconnect between locals and river. “Upgrading Wybrzeże Helskie will cut several thousand people who live within walking distance of the river off from it, degrade conditions for cycling along the river and increase the noise,” he says. “The road reconstruction should be an opportunity to improve the accessibility of the river bank, not to repeat the mistakes done on the left bank. Flood damage is just an excuse for building this road without a proper environmental impact assessment.”

On a perhaps more prosaic level, the water tram, or Wars, journeys up and down river showcasing the ‘wild’ Warsaw on the east bank of the Wisła. The ship pulls out from Czerniakowski Cypel and carries 150 passengers on 90-minute cruises a few times a day. In 2005 Warsaw came up with its Vision 2020 plan, which was essentially: left bank culture, right bank nature. Today the Praga bank comes under Nature 2000 as a protected habitat. “This seems to be the continuing strategy,” says Darasz. “Whether or not it will continue is another story, what with all that juicy land going spare.”