A Shot in Time 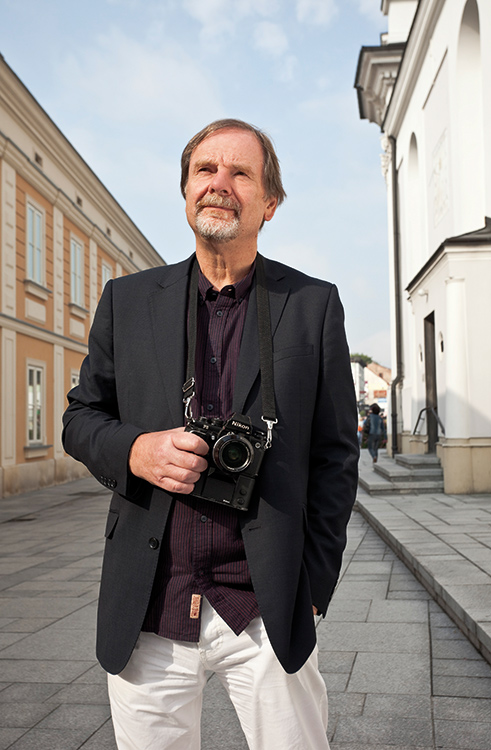 What’s your connection to Poland?
My parents were Polish and came to Britain as wartime migrants. They waited till 1963, when I was 13 and Stalin was long dead, before we came over, on holiday, as a family. After the age of 15 I kept returning here in the summer on my own. I guess for some people their roots mean little, but for me they meant a lot. Forget that the political system was terrible, I just loved the country.

How did the photography begin?
I got my first camera when I was 11, a Kodak Starmite – my parents gave it to me as a present after I passed my exams to get into grammar school. I remember visiting Poland two years later and in those days loads of people would use their bathrooms as a little darkroom when everyone else had gone to bed.

One time I got back from the coast with my uncle and we went into his darkened bathroom to develop the photos. That’s when I first saw the magic of the photographic prints coming up in the developer, in the red light. I caught the bug. I never really considered becoming anything other than a photographer.

How did you start as a professional?
When I was studying photography one of my lecturers owned a features agency just off Fleet Street. He took me on as an all-rounder doing darkroom duties, filing photos, going off on assignments… During that time I went on another trip to Poland and discovered a museum of beehives close to Poznań, in Swarzędz: the kind of place where the hives were shaped like bears or girls in folk costume. It was the first big photo story I sold.

I continued visiting Poland but wanted to see it in ‘real time’, not as a tourist. Growing up I felt like I had one leg planted in the British camp and another in the Polish camp – but the Polish leg always felt longer. I figured, well, if I’m going to be Polish then I might as well live there for a while. I wangled a journalist exchange job with the state press agency and they gave me a working visa. Basically I kept prolonging that for as long as I could before they gently thanked me. Then it was time to get accredited as a foreign correspondent.

Which other stories stand out…
So the second big one I did was about a monastery that had its own fire brigade – you had all these monks running around in habits and helmets! I actually sold that myself to Paris Match and then the pictures went global. I really did try and avoid doing news stories, but the news found me.

Looking back, it was three Poles who formed me and my later career: Pope John Paul II, Lech Wałęsa and General Jaruzelski. In spite of not speaking French I’d become accredited as a French correspondent when everything started happening. The election of the Pope returned this country to the European map and here I was living in Poland. It wasn’t that I was any better than the Polish photographers, but I could speak good English and as an accredited journalist also legally ship my films abroad.

And from there it snowballed…
In June ’79 the Pope visited. Newsweek sent their own, trusted photographer, and I was just their unknown local back-up. But it was me who landed the cover and most of the inside pictures. A few days later I got a call from their New York office going: ‘who the hell are yah!’ In those days working for publications like Newsweek and Time was just about the best thing that could happen – they wanted the best photographers, they paid well and they’d spare no expense.

They needed to have film on their desk by Friday evening New York time, so we’d usually shoot until Thursday and ship our films by air freight to New York via Frankfurt, or if time was of the essence, to London or Paris to catch the early morning Concorde to New York. I never got to travel on Concorde, but my pictures did!

Time for the inevitable Apocalypse Now question… What happened when Martial Law was declared in 1981?
Lots of foreign TV stations were holding Christmas parties that night. Throughout the evening there were whispers that the phones weren’t working, that people were being arrested, but we were partying so didn’t give it a second thought. I got home at about 3 a.m. and saw a car standing outside with its headlights dimmed and thought, oh, that’s a bit strange. As it turned out it was a friend inside: ‘grab your camera,’ he said, ‘something’s happening.’

I didn’t see my wife for about a week after that. My friend and I went around shooting everything we could, of course in secret, from hiding places: by that time the lines were dead, the airport was sealed, and the Solidarity HQ ransacked. We crossed a bridge and saw barricades by the roadside ready for use. The Apocalypse Now photo was simple. I knew immediately that the whole scene was a wonderful play on words – come on, parking an armored vehicle under a sign declaring Apocalypse Now, they were asking for it!  The difficulty was getting the film out of Poland.

How did you manage?
I knew if I tried leaving the country myself there was the chance of being stopped at the border and searched. And even if I did make it out of the Poland, then there was the possibility I wouldn’t be let back in – I had my wife and child here so couldn’t risk that.

Instead I headed to Dworzec Gdański which was where the 21.50 train to Berlin left. There was a 22:00 curfew in place so I had to be quick. I ran down the corridors and found a West German student. I didn’t lie to him, I told him what I had and asked him if he could get my film to Newsweek’s Bonn office. From there, everything was in the lap of the Gods. I only learned several weeks later from a Finnish correspondent that my pictures had made it into print. As for the student, I’ve never found out who he was. I’d love to thank him.

Do you ever tire of talking about ‘that picture’?
Every time December comes around I know what’s coming. I know I’m going to be getting calls about it. But I shot the photo, so I’ll take the consequences! Besides, it’s nice to have taken at least one picture that people really appreciate, at least by the people here.

Did your work make you a target?
Yes, people were looking into my life. A few years back I picked up the dossier that the secret police had kept on me. For some reason they’d given me the nickname Kret (‘the mole’), and that was handwritten on the front of my file. It was, essentially, 150 pages of silly information, with the first reports dating from 1975.

One of the informants was a guy who lived on the same floor as my mother-in-law. Some of his reports were accurate, others were wrong. One of his notes mentioned how we bricked-up the bathroom window. It was actually to prevent the smell of dead pigeons, but he wrote, ‘The Niedenthal’s have bricked-up the window so I can’t see in!’

Define what a photojournalist is…
It’s a calling. You’re documenting lives. It’s not quite the same as being a straight news photographer, it’s deeper than that. Anyone can take photographs, but not everyone can be a photojournalist. It’s more of an American expression I think, but it’s a good way to describe our work as such a photographer has to have an additional, journalistic instinct. Back then we didn’t have internet or mobiles and yet we knew everything.

Do you ever get nostalgic?
Of course I remember the old days with nostalgia, but mainly on the basis of my being young then. The stories happening later on, in 90s Poland weren’t so interesting: people making fortunes, people losing them… After what I’d been through that just didn’t seem compelling. One of the things that first attracted me here was seeing normal people fighting an idiotic system – everything they did was against it. I loved that and was proud to be part of it, to be part of a revolution and photographing history in the making.

The signed and framed photographs of Chris Niedenthal are available for purchase at: chrisniedenthal.com

His website was designed by the Warsaw-based creative agency HUNCWOT (Huncwot.com). 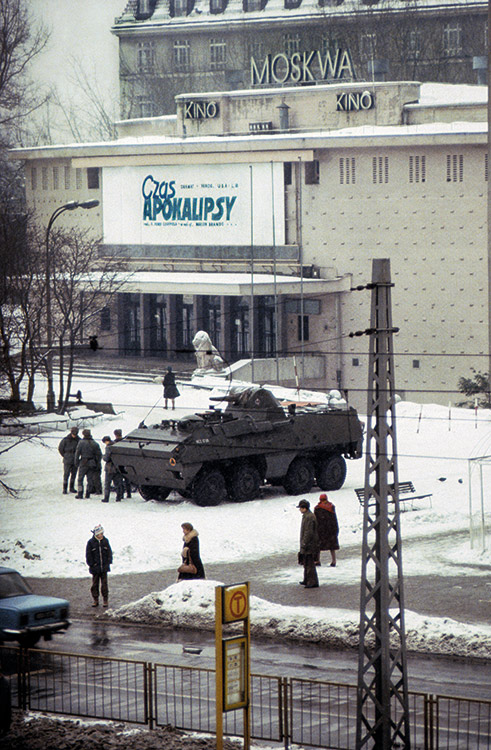 “Apocalypse Now. Martial law in a nutshell. For Poles, it sums up their feelings towards the Soviets. The Moscow cinema. The name of the film. The armored personnel carrier parked outside…” 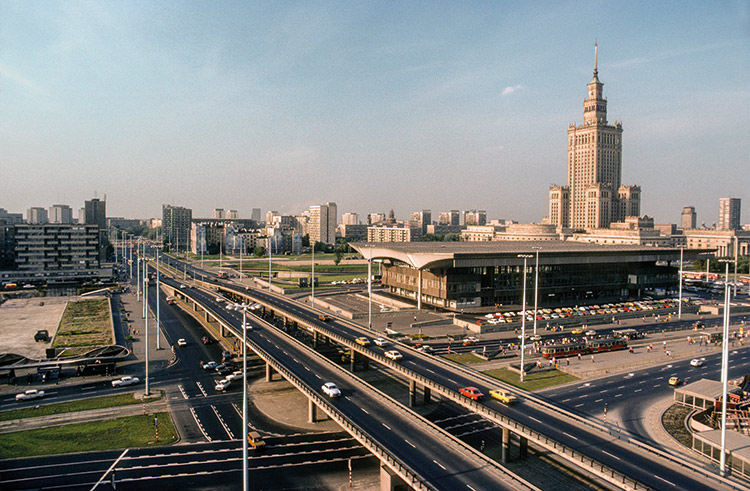 “Warsaw, October 1979. The Palace of Culture is there. Central Station too. Even the flyover is there. All the rest is history.” 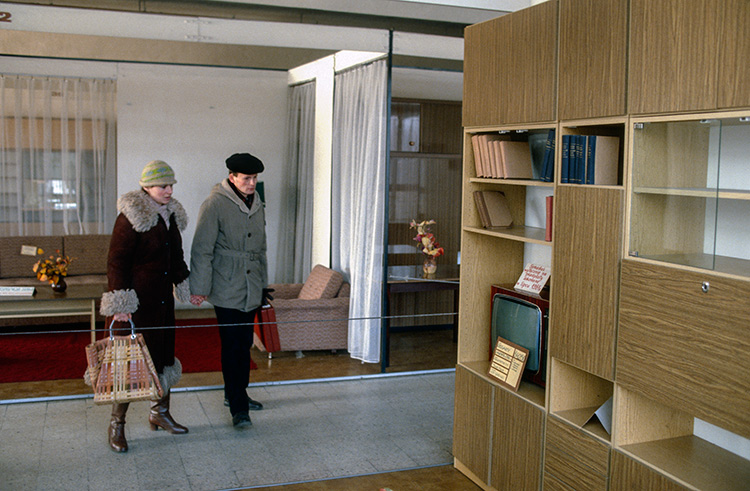 “The Emilia furniture store in central Warsaw. You could wander through the shop and look at furniture, but actually buying it was a different matter. There is a little sign in this photo saying that you can only buy this particular set-up if you had made a prepayment in July 1981. The photograph was taken in late 1982.” 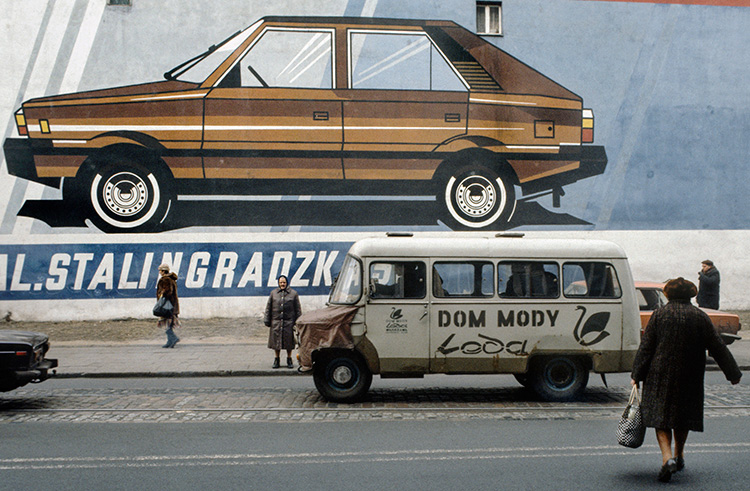 “Ząbkowska Street in the Praga District. Advertising billboards, if they existed at all, were minor works of art – hand-painted murals. Shot in early 1982.” 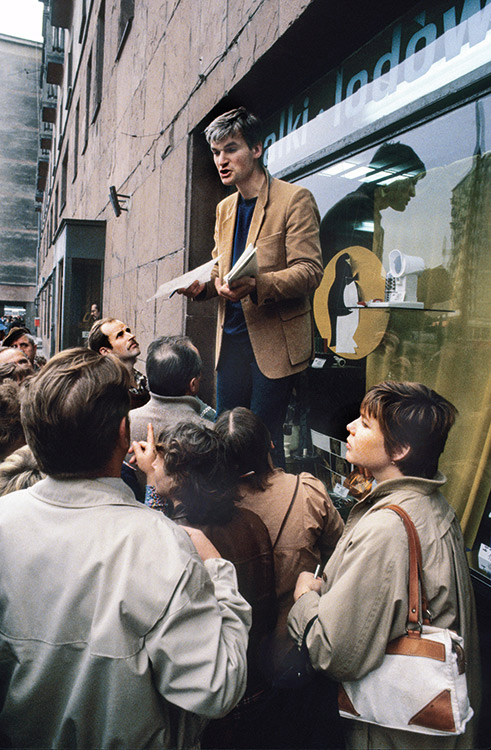 “Warsaw, July 1981. A notorious ‘social list’ outside a shop selling household appliances. Knowing that there was going to be a delivery of washing machines, fridges etc., a disorderly queue would form. This man took matters into his own hands and made everybody sign a list, every few hours. If you did not turn up to sign it again – you lost your place in line. Simple.” 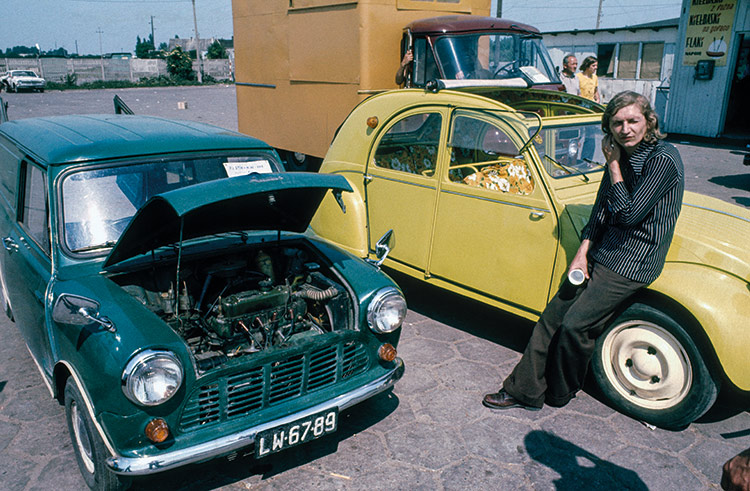 “A used-car market in Warsaw, the ‘giełda samochodowa’. This was shot in the late 1970s, but even then you could buy a (very) used Mini or a rather ancient Citroen 2CV. Any car could be bought or sold – it was very much a seller’s market.” 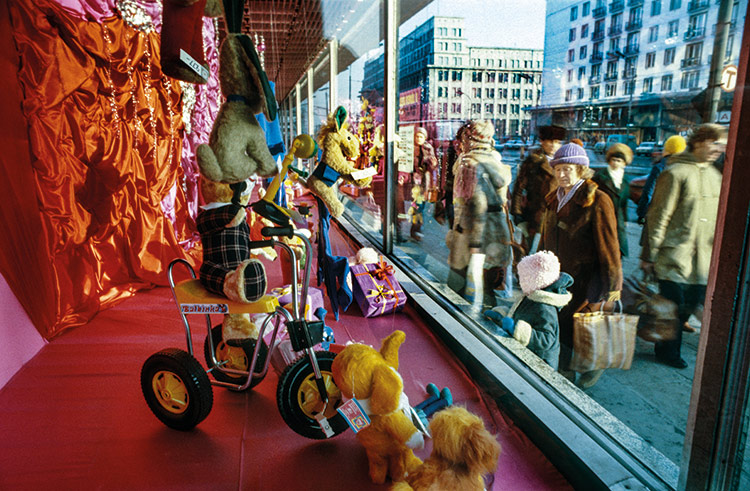 “Toys on display at the Dom Dziecka, later the SMYK store, on Al. Jerozolimskie in Warsaw in the 1970s.” 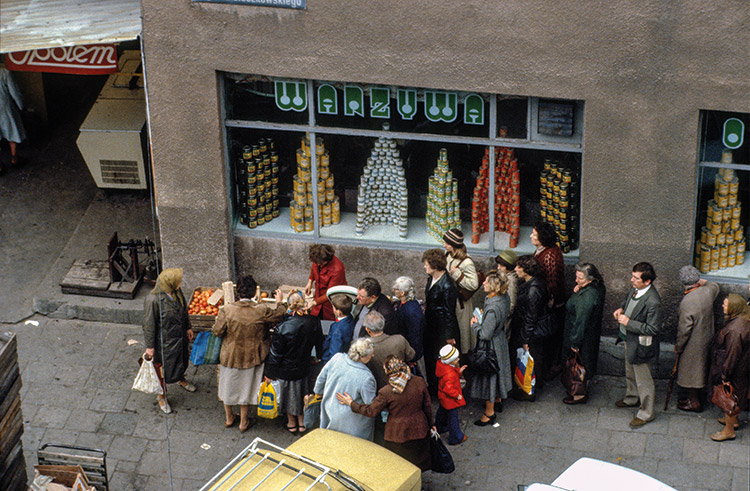 “Warsaw 1980. A line would immediately form even for fruit and vegetables. The shop itself proudly displays a fanciful arrangement of canned goods that nobody particularly wants to buy.” 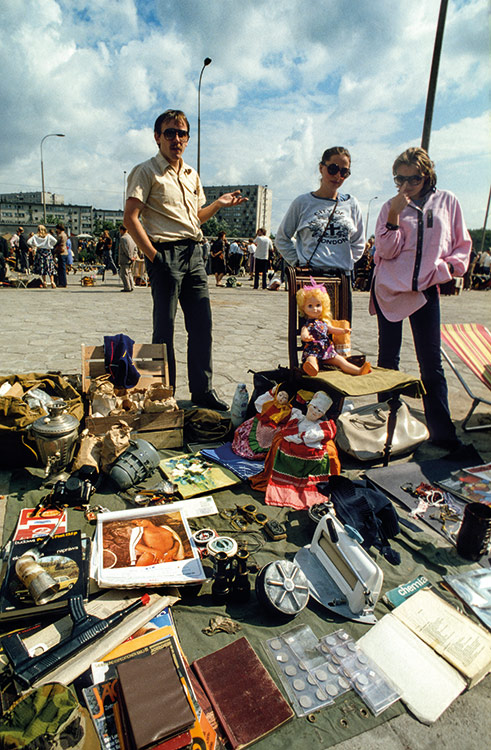 “A Warsaw flea market in 1982. A wide range of goods would be on sale here – meaning virtually anything and everything.”