A beautifully sensitive paean to the quirks of Warsaw life, Fanny Vaucher’s Pilules Polonaises (Polish Pills) began life as a blog, before evolving into a book. We speak to the Swiss-born artist to hear her side of the story…

What was the idea behind the blog?
When I came to Warsaw I was fresh out of art school – drawing was something I did every day. Anyway, I was so full of general bewilderment that I started to jot down my questions on paper. It was my way of dealing with the shock of this new environment. It became my way of creating a link to it, taming it by bit by bit, pill by pill. I started posting these drawings and texts on a blog as I thought my friends and family back home would enjoy them, but it became clear pretty quickly that the people who liked them the most were those with a link to Poland – be they Poles or foreigners. It seemed they shared a lot of the experiences that I had thought were unique to me. This was never a grand plan, it all developed spontaneously and it was beautiful how strongly I bonded to the city. I made great friends through this project and it had a massive impact on how I feel about Warsaw.

The book celebrates the everyday person of Warsaw. Who would you say is the city’s unsung hero?
Yes, it does, and that was also my goal, to present Warsaw through people I could relate to, rather than famous kings on horses… Well, Warsaw’s unsung hero would be a woman. As a feminist I have always been attached to unsung heroines and here there are so many. There are those from the war that deserve more recognition, such as Marysia Eisenstadt, and then there are the completely unknown ones like my old neighbors in Wola who were just teenagers during the Uprising. Their stories remain unheard. 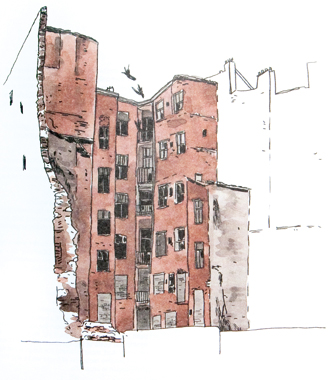 What challenges did you face?
I feel lame saying it but the only thing that drove me crazy the first year I was here was the long grey sky in the winter. It felt endless: like a cooking lid over the cold city. Sometimes I would wake up and wish for nightfall just to avoid seeing another short grey day. Apart from that, the only things that would annoy me where my own flaws: language failures, feeling shy among trendy crowds, etc.

The book touches on complex themes of abandonment, heritage, development and gentrification. Where do you see Warsaw’s future?
I’m very sensitive to ‘old’ architecture, which here mostly means anything that’s pre-war. It’s always hard for me to pass these red-brick tenements that have often purposely been left to decompose in order to clear the ground for new skyscrapers. I can’t accept this logic. We’re even seeing it with some of the more modern buildings, e.g. Sezam. To me there’s something wild and reckless about the whole situation, and I think the people of Warsaw will one day regret this destruction. 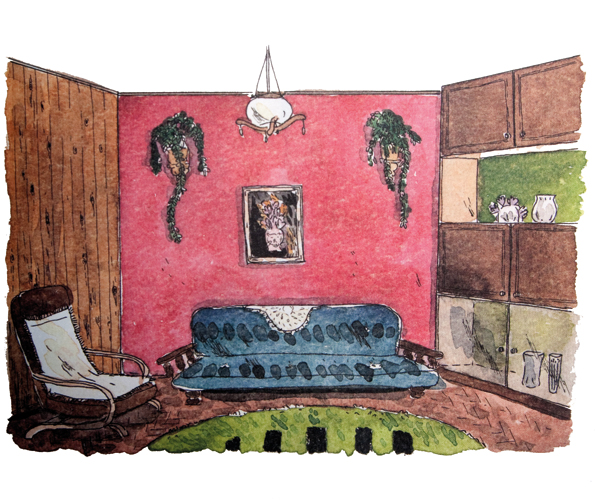 There’s a wonderful pill called Whose Afraid of Small Furnished Flats: so what was your first Polish flat like…
The first one I stayed in was my boyfriend’s flat, which was more a wooden cube than a flat. I’d never seen anything like it. The only things that weren’t covered in wood were the bed and the fridge – I’d purposefully focus on them! The girl who owned the place was my age and had revamped the flat this way. When my boyfriend mentioned possibly painting it white she couldn’t believe her ears. Because of this the style of flat furnishings became a real curiosity to me, learning what people of other backgrounds, ages, class, etc. considered to be nice and homey.

What has Poland taught you?
One thing that makes Poland really special for me is that it looks mostly the same. But while there’s nothing hugely exotic about it it’s so very different. Sometimes I wish I looked ‘more foreign’ so the natives would be more forgiving for not understanding their way! Just thinking about how the war and post-war forged the Polish identity, their tastes and aesthetics, their dreams and romanticism, even their sense of humor… It’s something I’ve tried to understand but it’s just too different.
Therefore, I’d define my experiences here as a time of learning to be open to others. I’ve not really lived anywhere else outside of Switzerland so I subconsciously assumed everyone was like that – I know that sounds naïve but I accept that. Poland taught me a lot about myself, and I’d say I’m even grateful for the harder moments: I like to think that it all made me a more empathetic person.

Do you have a favorite pill?
Oh my, I’m the kind of person whose never satisfied with what I’ve done so to have a favorite one… That said, what gave me the most pleasure was drawing birds: the hooded crows, the jackdaws – what smart companions to have! And I loved the vegetation: the banks of the Wisła, the markets, etc. I can never get enough of that. Warsaw can be such a green city. It’s a marvel in the spring when the grey disappears behind the young, green colors.

Pilules Polonaises (Polish Pills)
Published by Fundacja Bęc Zmiana
and available in cult bookstores around town. For details of her work see:
pilulespolonaises.blogspot.com