Declassified after decades of secrecy, the doors have now opened on Warsaw’s nuclear secret…

On the face of it, this has the feel of a normal, spring Sunday. Suburban Warsaw is hungover and quiet, so quiet that you can almost hear the hanging laundry moving gently in the breeze. The stillness is only punctured by the occasional clang of a distant remont. To me, this is the sound of a typical weekend. But today is anything but ordinary. We’re inside a military compound and our company for the day looks ready for war… nuclear war.

With us there is a young girl wearing a black t-shirt with the name of a military re-enactment group stamped in Teutonic script, and two middle-aged guys with Geiger counters hanging from their military fatigues. “Soviet issue, 1986,” says one noting my interest. Together, we are in the care of Michał, a strapping chap who for the past year or so has been renting a Cold War bunker from the Polish armed forces. 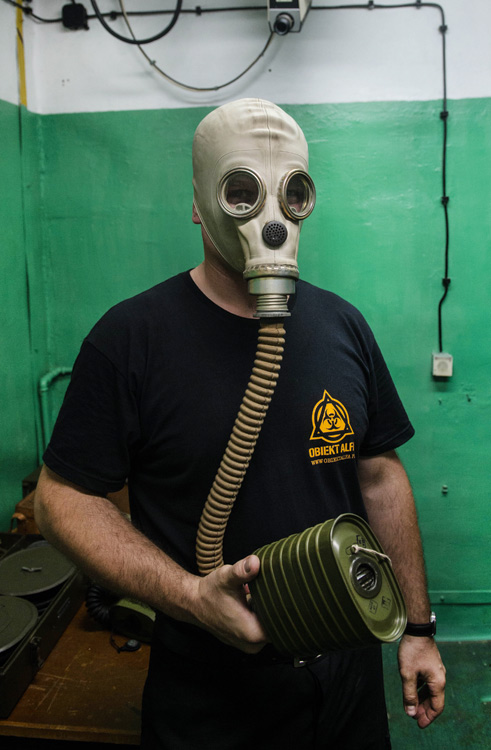 Found behind the back of Powązki Cemetery, inside a despondent-looking army rehabilitation facility, Obiekt Alfa is thought to have been completed around about 1977. Built to house a mysterious chemical / biological research unit, it’s from here that the nationwide medical operation would have been conducted in the event of World War Three. Astonishingly, it’s thought to have still been in use up until 2006, with its declassification occurring only two years ago. In spite of this, there is little about Alfa that feels contemporary, instead it’s a sinister reminder of paranoid times. 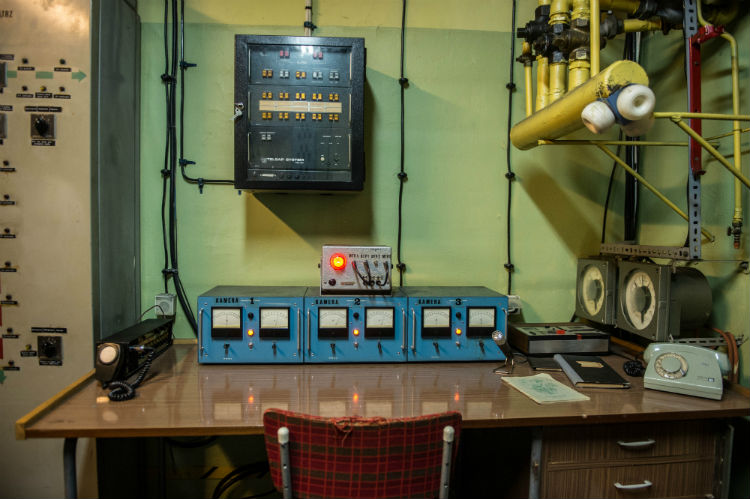 We follow Michał through a clunky steel door, and then another and another. I lose count how many we step through, though we’re told there’s 34 hermetically-sealed portals in all, some weighing as much as 300 kilos. The air is thick and musty, and we eventually arrive to a corridor housing a row of decontamination chambers. It’s dark, eerie and a little claustrophobic. 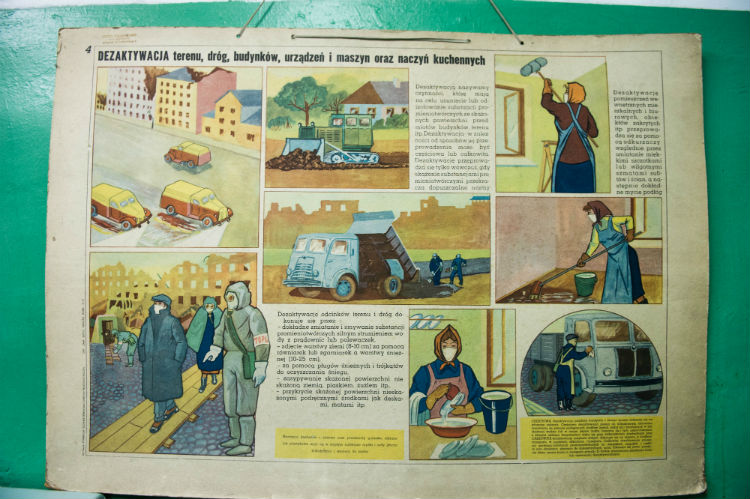 Beyond, we file into the command center, a room filled with clumsy technology and numerous dials and switches. “That machine there,” say Michał pointing, “was the first in Poland to record something amiss in Chernobyl.” Sinking into a sagging orange armchair, 80s newspapers scattered in front, I try and imagine the reaction of the researchers that were based here. 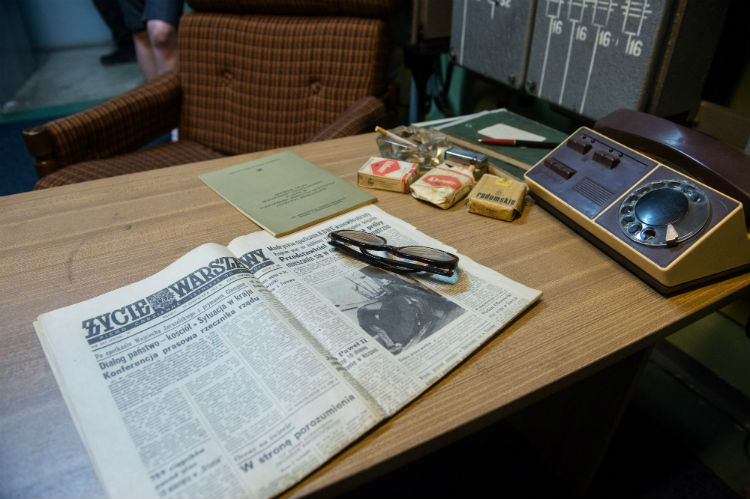 Although the bunker is just 150 sq/m, all sense of scale is lost within its twisting confines. There’s a lab brimming with gas masks and mineral samples, and a doctor’s surgery with notepads and stethoscopes and wobbly glass cabinets with lines of utensils and jars. On learning the contents of one such vessel, I nearly faint: tapeworm. The adjoining bathroom, all brown stains and dark patches, is brutal; stare down the plughole long enough and I’m sure you’d summon the spirit of Freddie Krueger. 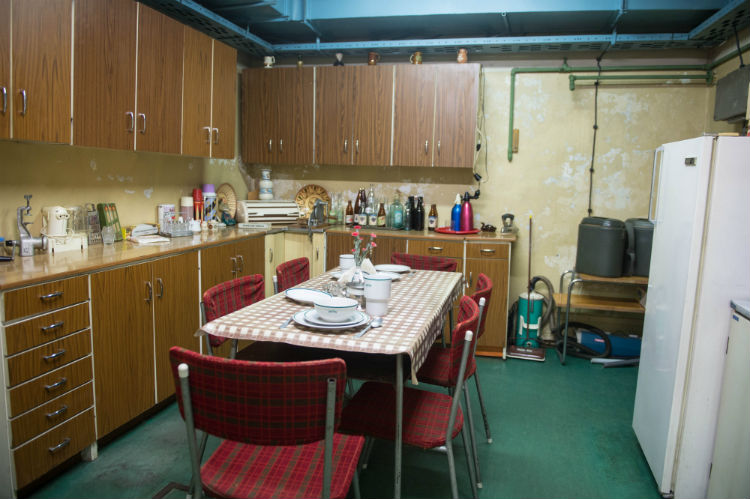 Working in shifts, around 19 scientists were based in Alfa at any one time: locked away from the outside world, it’s difficult to imagine the psychological challenges of this isolated existence. Of course, there was downtime, and the kitchen / common room offers a revealing insight. As if frozen in time, we poke around shelves and cupboards packed with Konsumy-branded products and items: while the general population lived in deprivation, members of the internal security services had the pick of ‘luxury’ goods from this ‘closed to Joe Public’ chain of stores. Bottles of aftershave, cookbooks and long-emptied beers lie sprinkled in testament to the perks of the job. 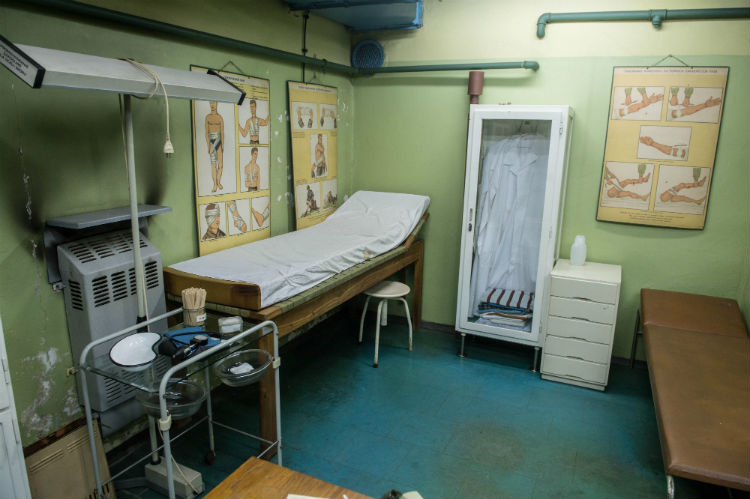 Yet while the rewards were ample, employment here was no gravy train. A toxicological unit is heavy with test tubes, beakers and lingering synthetic odors and we’re told it was here that Alfa’s occupants handled highly hazardous material. On hearing this, ‘the Geiger Gang’ break out their equipment and start scouring the room for signs of radioactive waste. 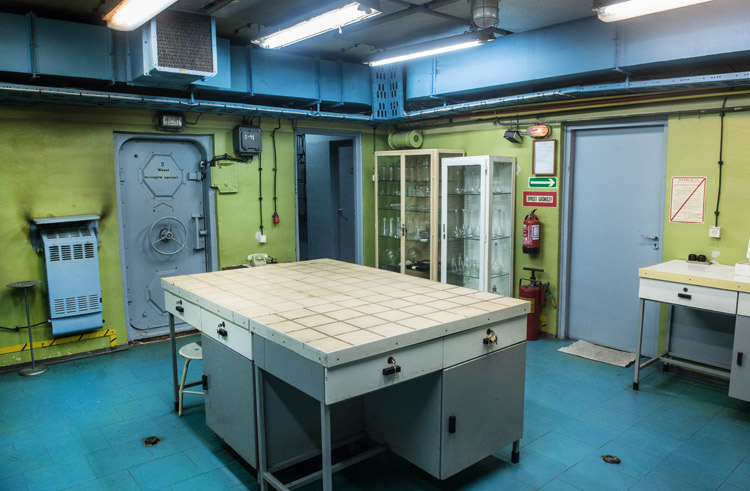 Further, and with the tour coming to an end, we pass a compact cubicle selling guidebooks and trinkets. Even this cell, it transpires, has its own little story: “back in the day,” says Michał, “up to four volunteers would squeeze in and spend up to five days at a time locked away under observation.” Forbidden from sleeping, and kept in fluctuating temperatures ranging from 5 to 50°C, it’s here that human guinea pigs would undergo confidential experiments that remain a riddle. 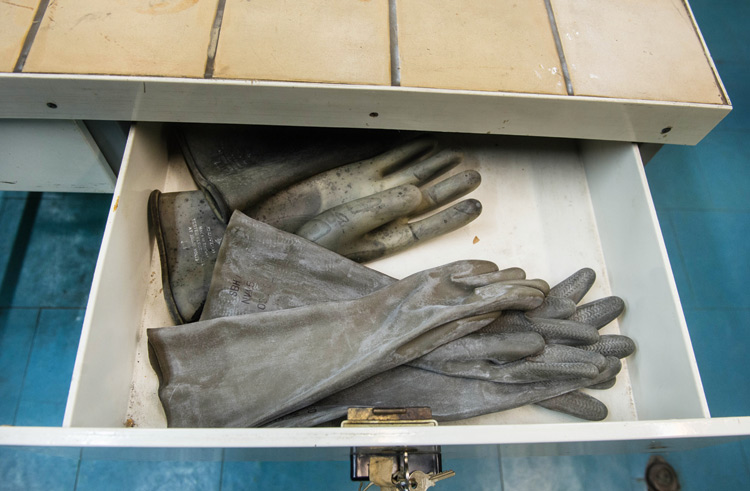 Finally, we leave the stagnant, suffocating smells behind and reemerge outside to beautiful sunshine. Light streams through the treetops and a couple of dogs bask in the shade; there’s an innocence to the scene. As we wait for a taxi to take us away, it’s the perfect weather to contemplate the unique and terrifying methods mankind has devised to wreak destruction and death.

Obiekt Alfa
ul. Kozielska 4, tel. 506 715 480, obiektalfa.pl
There are no set opening hours for Obiekt Alfa, however, Michał and his wife are often available at weekends to conduct tours for small groups. Ring ahead to make a reservation.