Warsaw University of Technology If the Polytechnic looks grand from the outside, then it’s positively jaw-dropping inside. Designed after the architects toured 11 universities...

Offering a rich spread of styles and stories, join us for a look at the architectural highlights of Warsaw's higher seats of learning...

Warsaw University of Technology
If the Polytechnic looks grand from the outside, then it’s positively jaw-dropping inside. Designed after the architects toured 11 universities in six countries within a three-week window, what sprouted was a majestic structure inspired by the Italian Renaissance. Opened in 1901, the main building (Pl. Politechnika 1) was defined by a cloistered pentagonal courtyard fringed by ornate staircases and capped by a stunning glass ceiling. 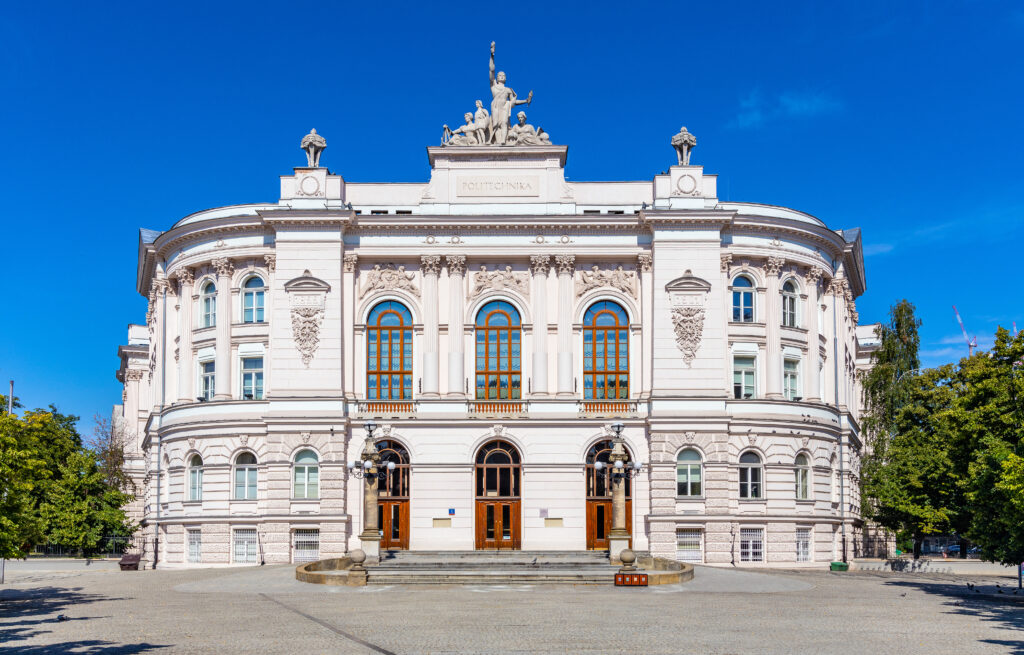 Operating covertly during the war, its professors were credited with getting to the bottom of Germany’s wunderwaffe secrets, and in all its estimated that 3,000 students managed to continue their studies during the war – classes officially resumed just five-days after the Red Army’s liberation, albeit in rather drafty conditions given the extent of the bomb damage. 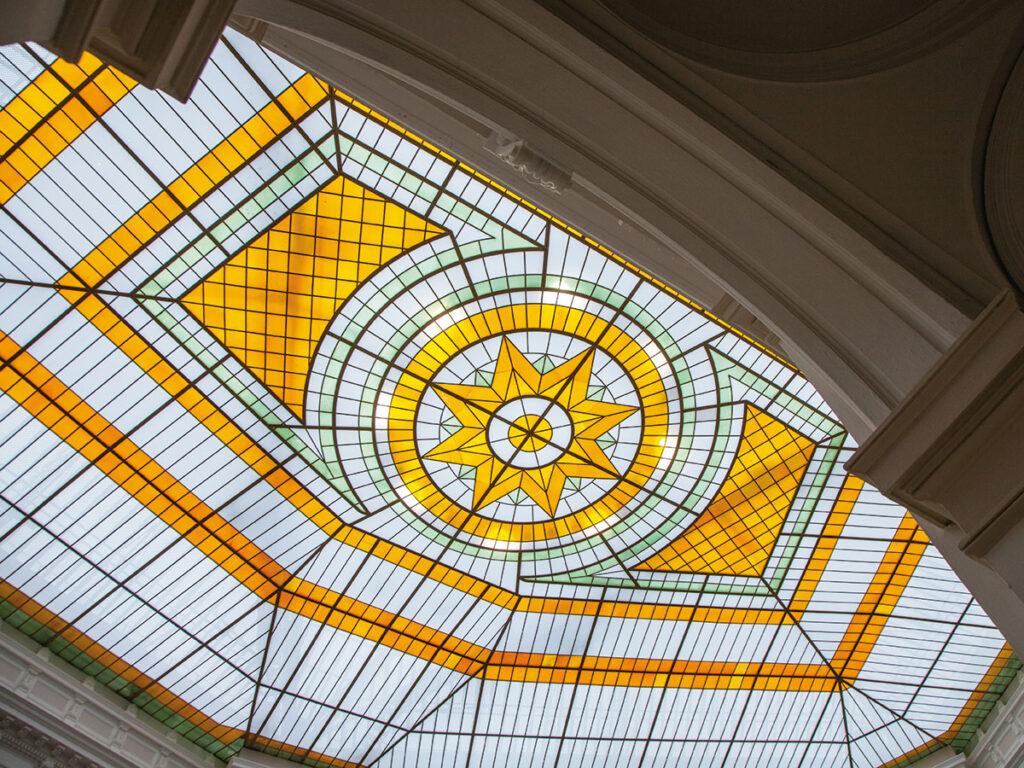 Stunning to this day, alumni include the inventor of the walkie talkie and the fictional Bond villain Ernest Stavro Blofeld – according to Ian Fleming, the world’s biggest menace earned a degree in Engineering and Radionics from here during the inter-bellum. 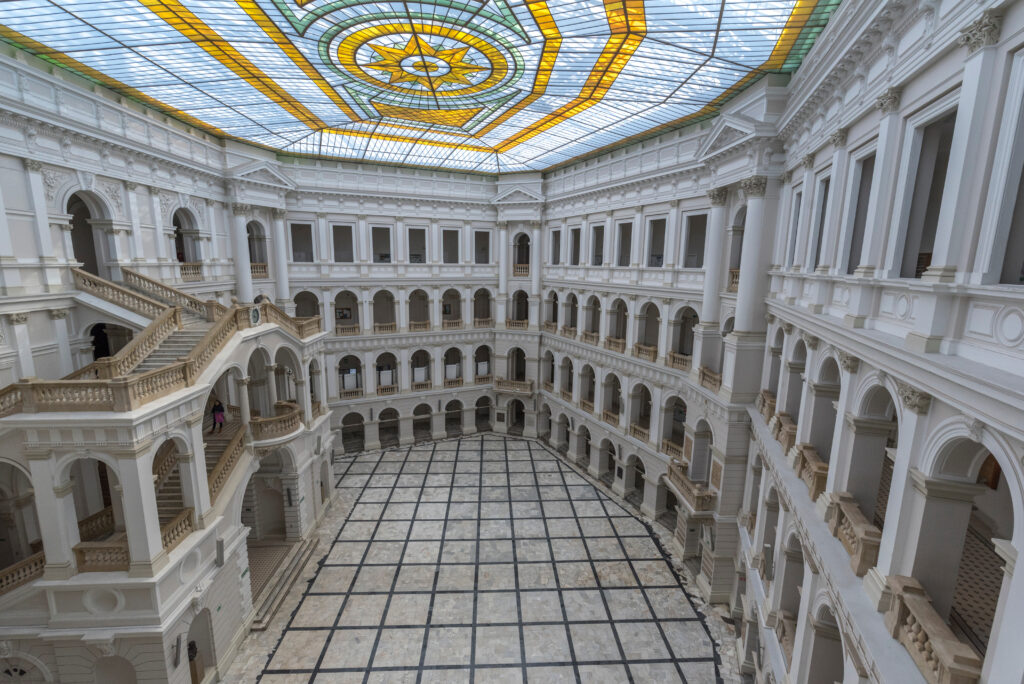 Faculty of Maths & Information Sciences (Polytechnic)
Completed a decade ago, the Polytechnic’s mathematics faculty (Koszykowa 75) rates as among the more triumphant educational projects in recent memory. 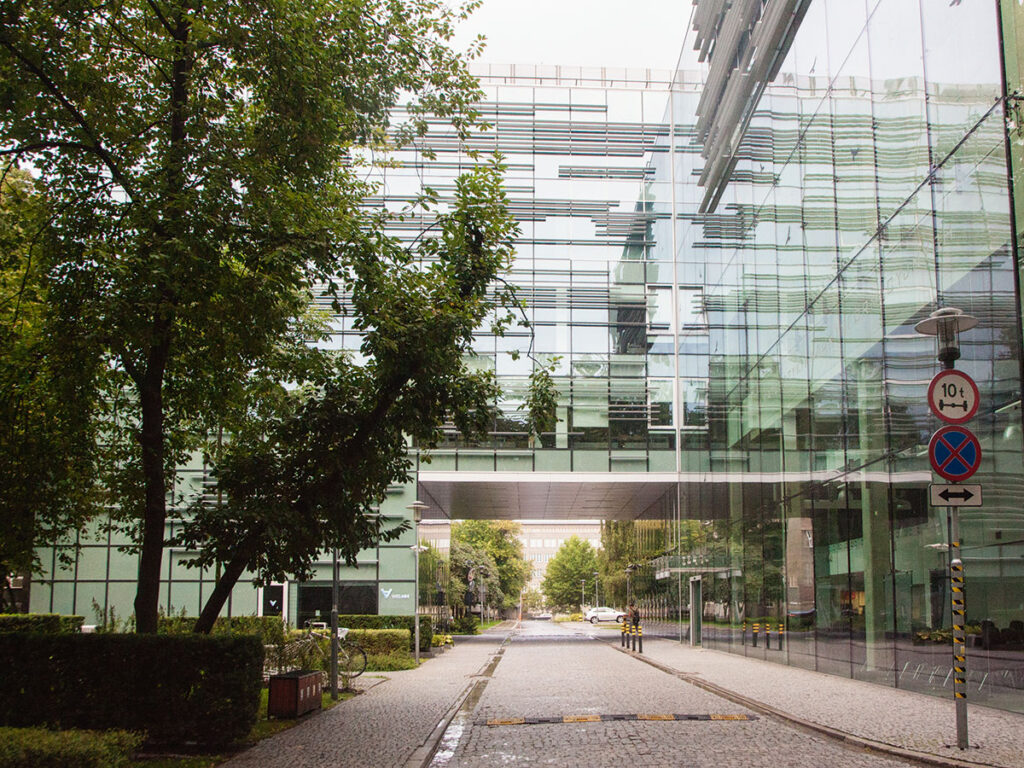 Radically glazed, architects designed it so that the glass shell would reflect and emphasize the older neighboring buildings and act as “an illustration of infinity”.

Adorned with razor-like fins on the façade, it’s equally striking from the inside with natural light, raw materials and stark white colors endowing it with an unambiguous openness.

SGH Warsaw School of Economics
Little less than an architectural masterpiece, the main building of the School of Economics (Niepodległości 162) was completed in 1956 and immediately hailed as “a model of social progressiveness” worthy of the conscientious Communists that would be educated within – it was ironic, therefore, that one of its most famous students, Leszek Balcerowicz, was later credited with leading Poland’s free market reforms throughout the 90s. 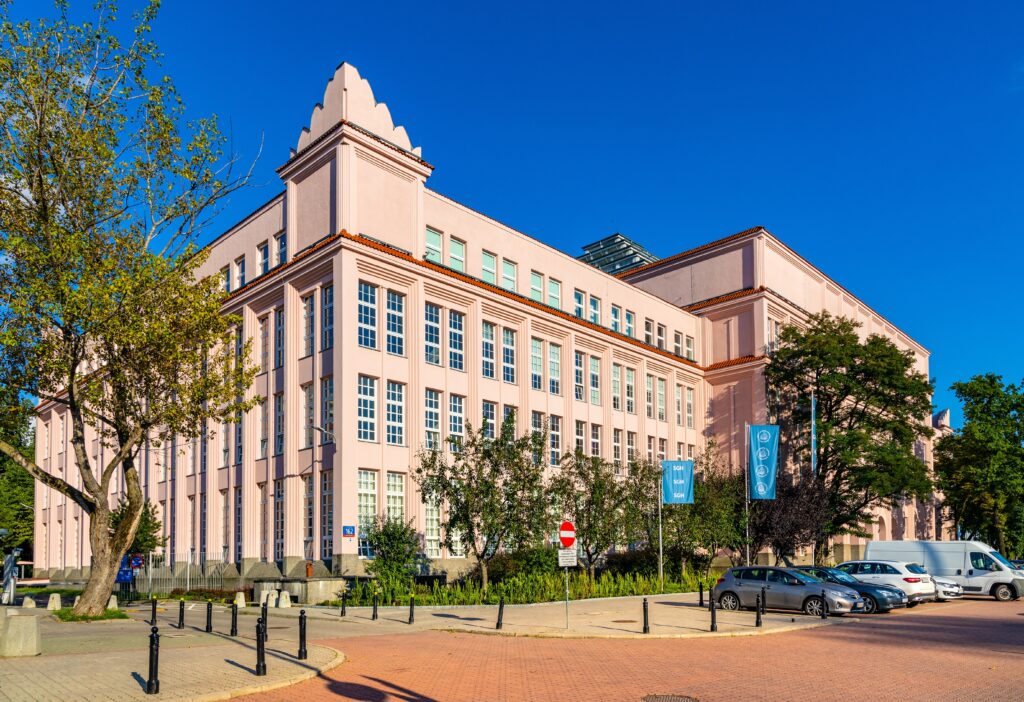 Principally, though, you visit to view the ‘parachute hall’, a glorious atrium capped with glass pyramid composed of 224 windows. 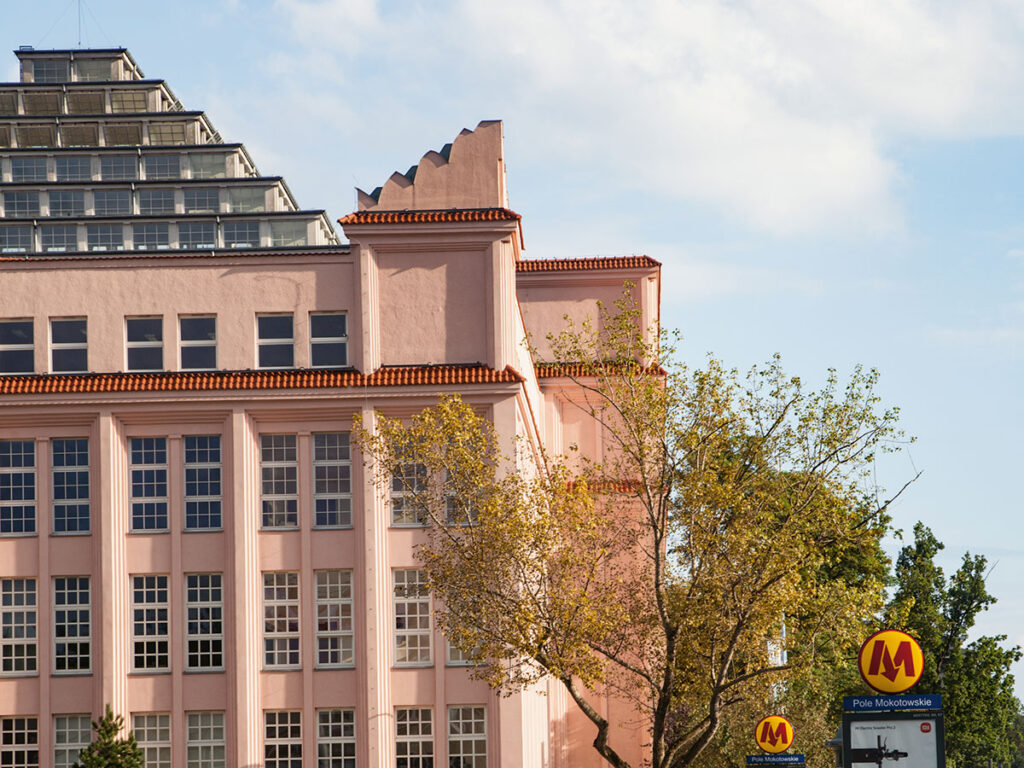 Further south at No. 128, Budynek C is equally worthy of a site inspection. Opened in 2006, this clay-colored building has proved not just a welcome addition to the campus but the city, as well – featuring a ribbed exterior and a slanted overhead roof, it was voted Building of the Year in 2006. 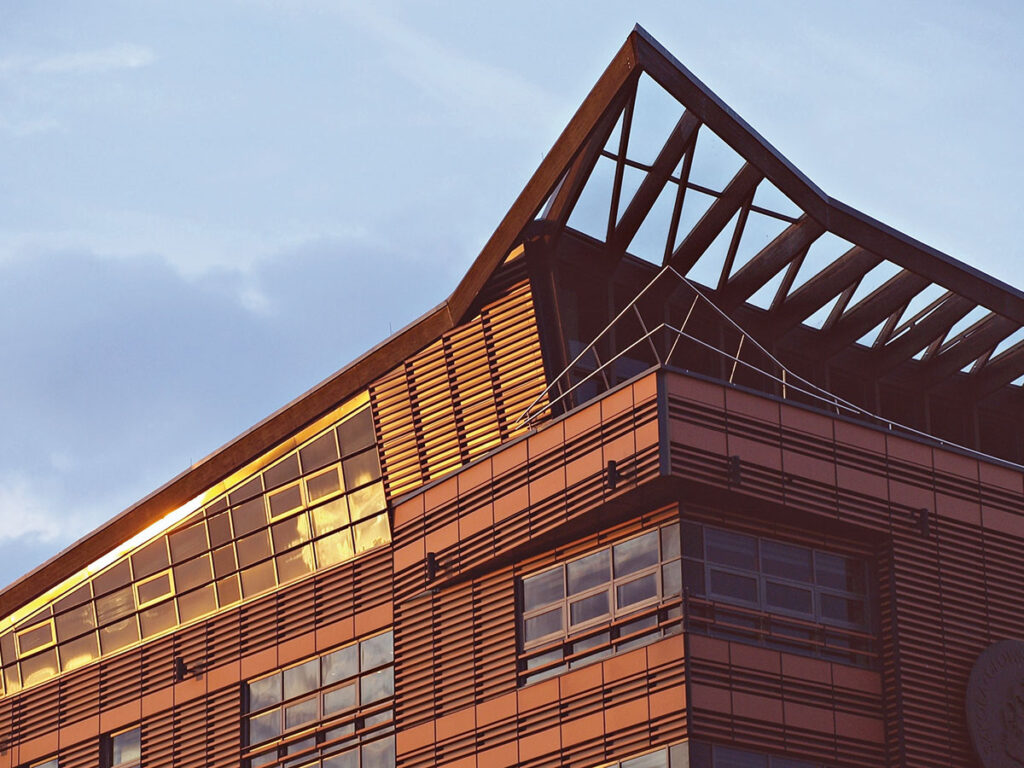 Fryderyk Chopin University of Music
Named after its most famous pupil, the University of Music on Okólnik 2 was rebuilt in the first half of the sixties in a manner that has since been lauded as one of Warsaw’s greatest exhibitions of post-war modernism. 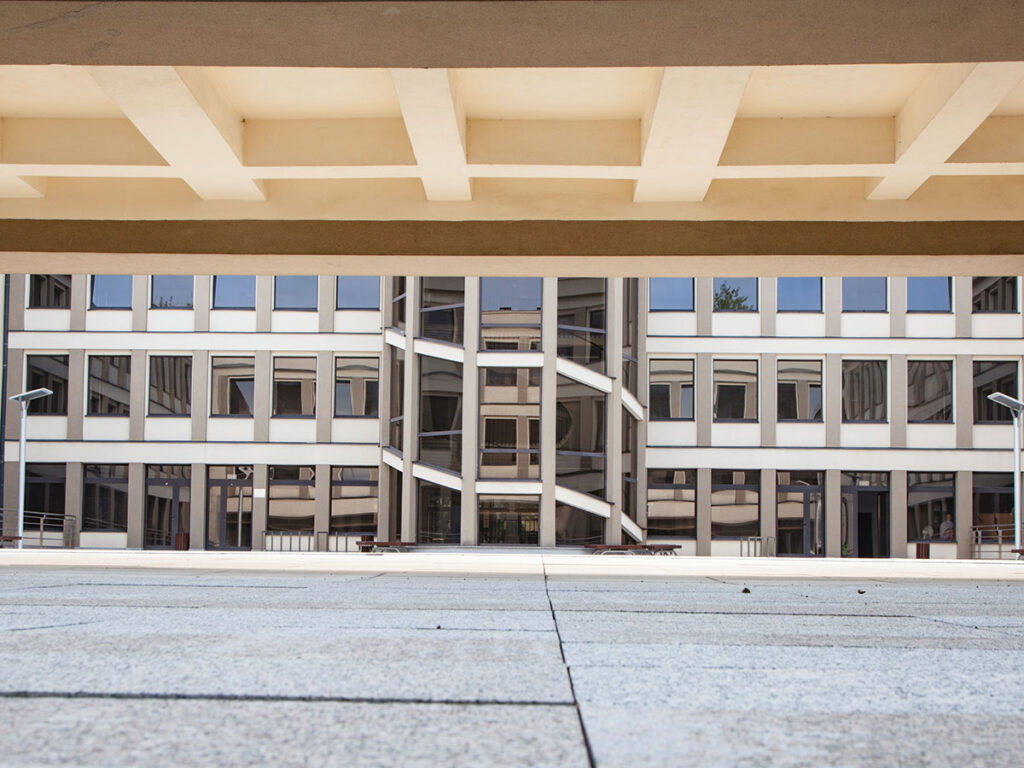 Squat, overwhelming and bunker-like from the outside, blend in with the student to reach a vast inner courtyard – views of this are best from the swirly, spiral staircase that stares out onto it.

But there is also another reason to visit – when temperatures climb, and windows are flung open, you’ll be treated to free gigs aplenty as you listen to aspiring talents tinkling on their instruments.

Academy of Fine Arts
For the architecturally inclined, the Powiśle campus of the Academy of Fine Arts (Wybrzeże Kościuszkowskie 37/39) is a beautiful marriage of old and new. First completed in 1914 to a concept by Alfons Gravier, the older section was funded by the philanthropist Eugenia Kierbedź (whose father, incidentally, designed the first permanent bridge connecting Warsaw’s left and right banks). 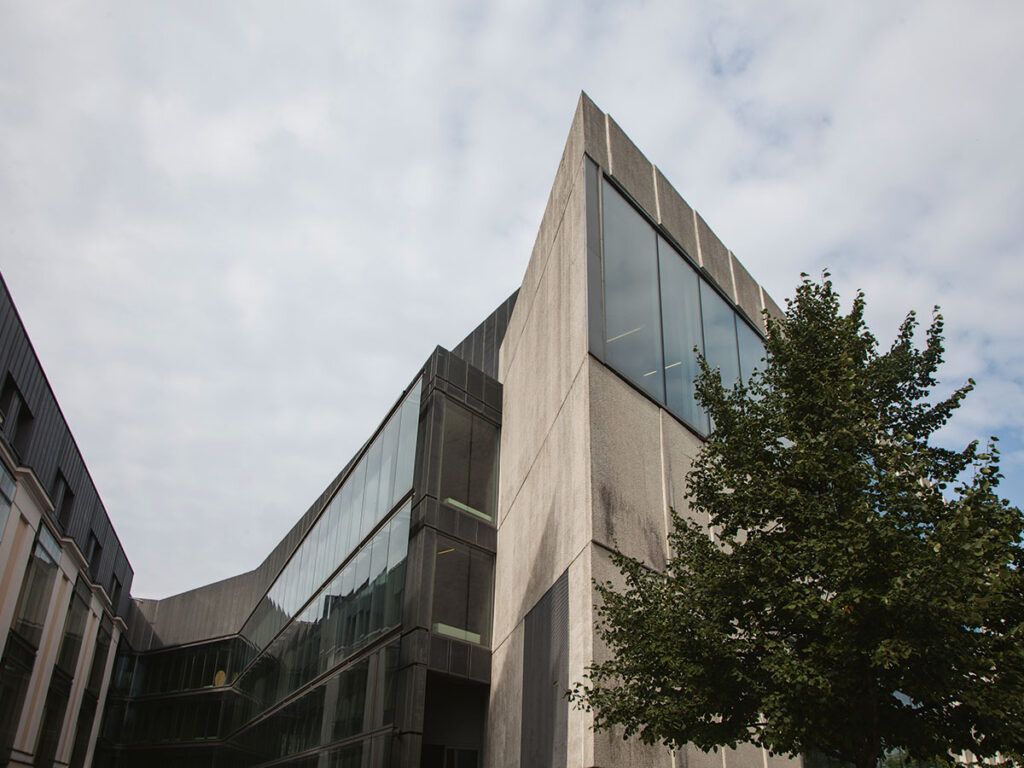 A century on, this grand Neo-Classical structure was joined to a new building authored by JEMS Architecki – pure, harmonious and ascetic, their project has won repeated praise for the way it’s created a seamless dialogue between two different centuries. An angled, narrow courtyard driven between the structures provides for rich photographic opportunities.

Just as famous is the older campus found in and around the Czapski Palace on Krakowskie Przedmieście 5. 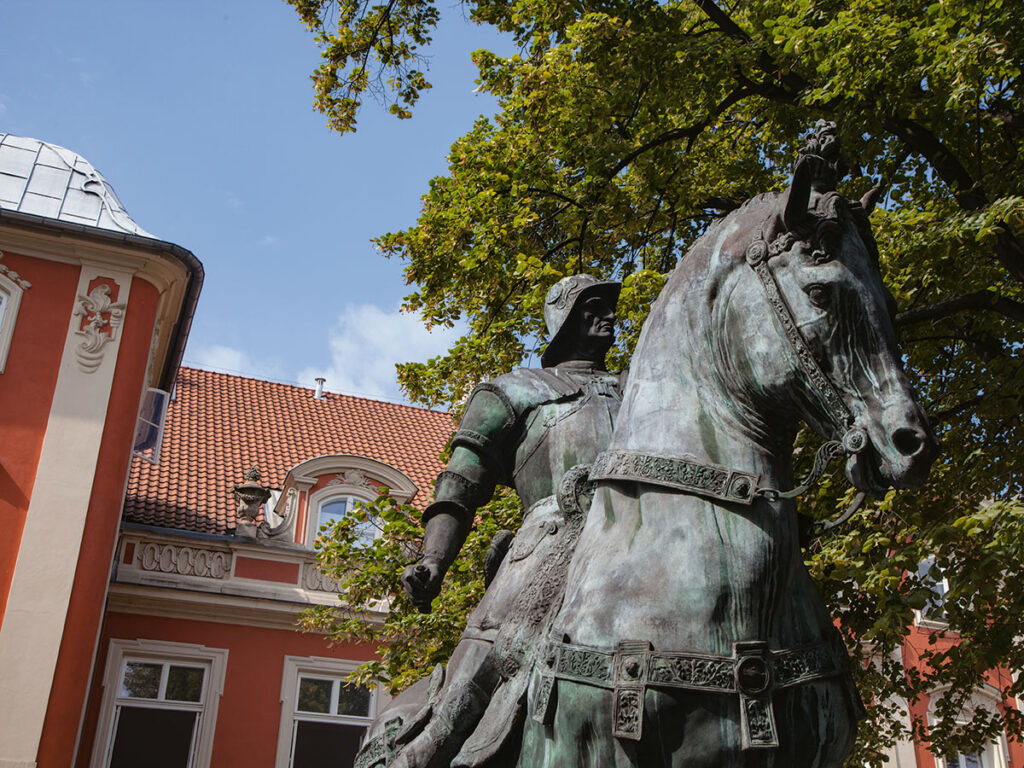 Serving as the city’s best example of the Rococo style, it was handed its current educational purpose in 1959 following its wartime destruction – previously, it passed through ten different owners with one of its floors even serving as Chopin’s last Warsaw apartment before the composer fled to France.

University of Warsaw
Established in 1809, Poland’s biggest university has been a springboard for many of the nation’s biggest heroes: Ludwik Zamenhof (inventor of Esperanto), Nobel-prize winner Olga Tokarczyk, wartime legend Jan Karski, poet Julian Tuwim and scores of politicians and leading intellectuals. 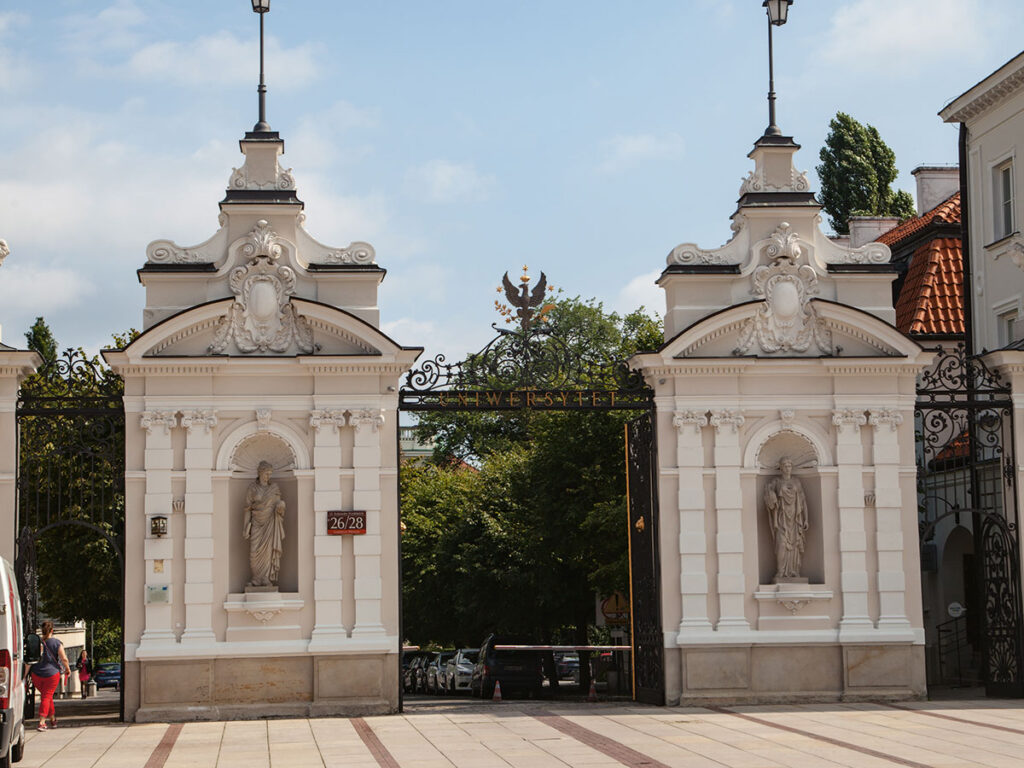 Entering via the main gate at Krakowskie Przedmieście 26/28, you get a sense of this history walking around the palaces that comprise the main campus.

A patchwork of manicured lawns and Neo Classical buildings, perhaps the most well-known of these is the Kazimierz Palace where Chopin’s father once worked.

University Library
Known as BUW, the Uni library on Dobra street has been hailed as “one of the largest and most beautiful rooftop gardens in Europe”. 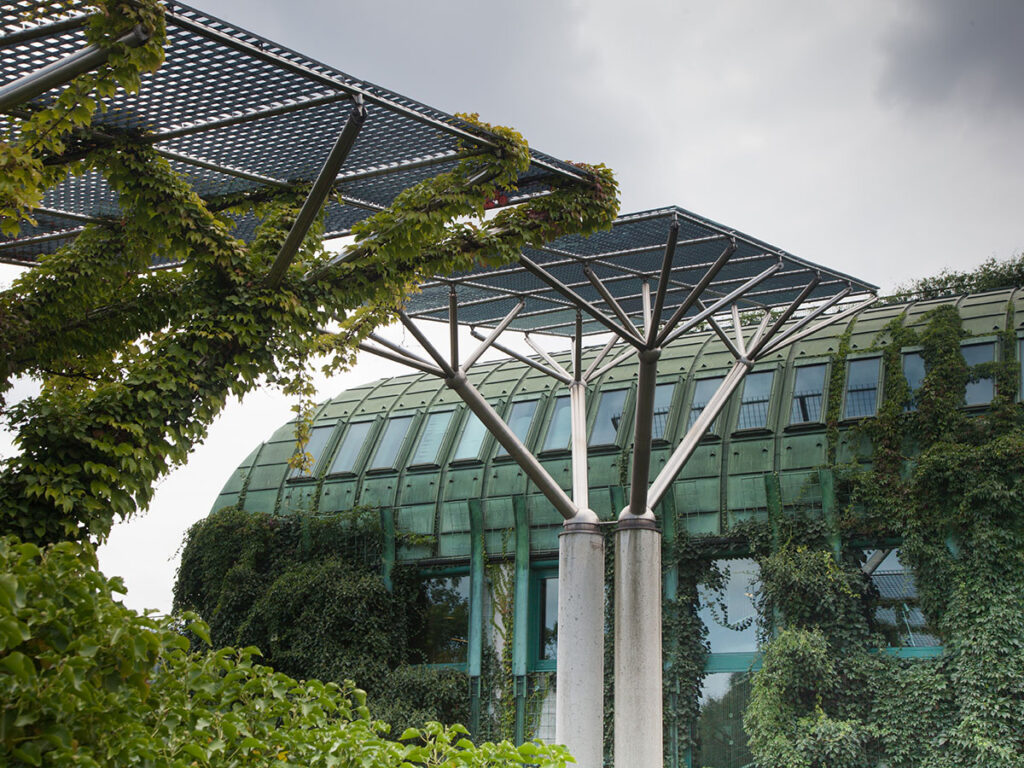 The project was implemented nineteen years ago with the park divided into two sections – a lower section and an upper bit that’s currently closed until the weather brightens. Now firmly ensconced as one of the area’s greatest treasures, it was described by art historian Marta Leśniakowska as acting as “a symbolic keystone between culture, nature and the cosmos.” 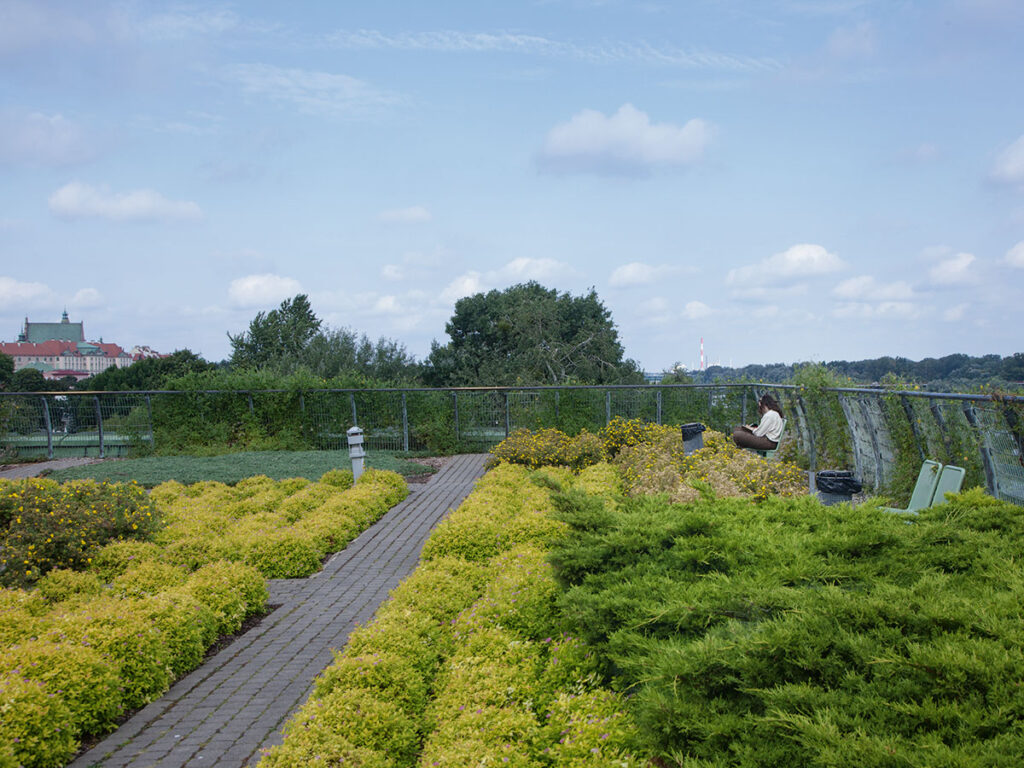 Wandering its sloping metal walkways and leafy alcoves, its easy to let the day drift away. Infilled with the granite sculptures of Ryszard Stryjecki, silvery willows, miniature apple trees and vine encrusted pergolas, it is a park with no equal. 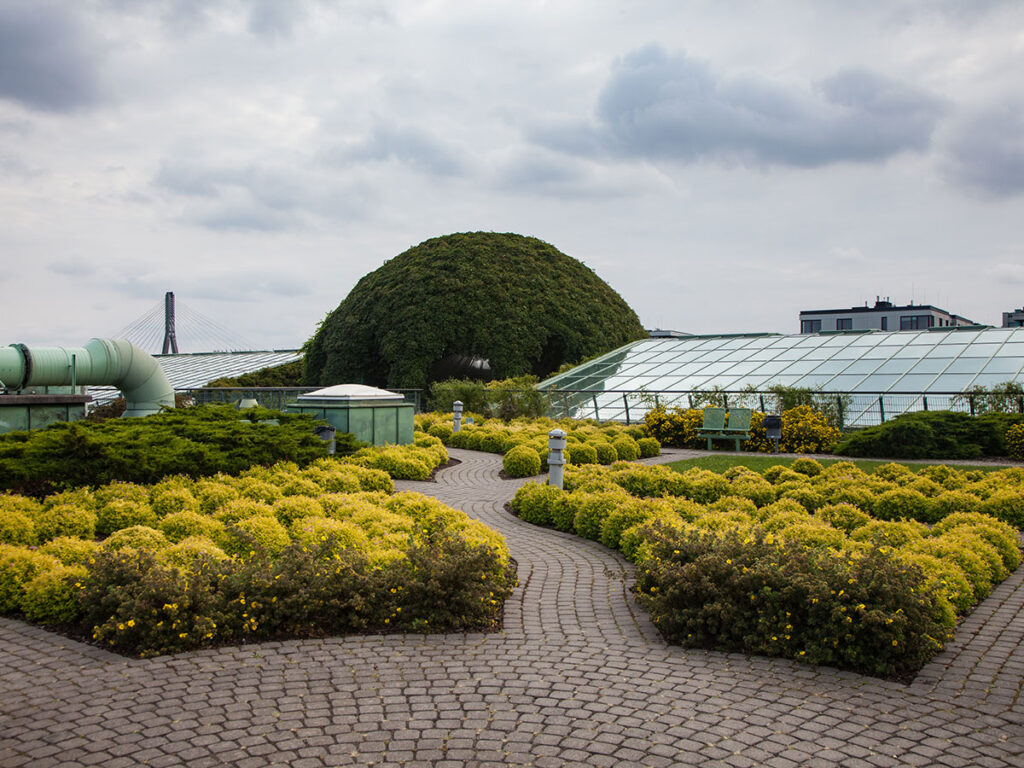 Completed by a rich spread of water features and a viewing platform offering spectacular sightlines of the riverfront, it’s particularly powerful when scarlet sunsets settle over the Wisła right ahead. Quite simply one of Warsaw’s most beautiful enclaves, it’s a striking, magical tribute to the talents of landscape architect Irena Bajerska. 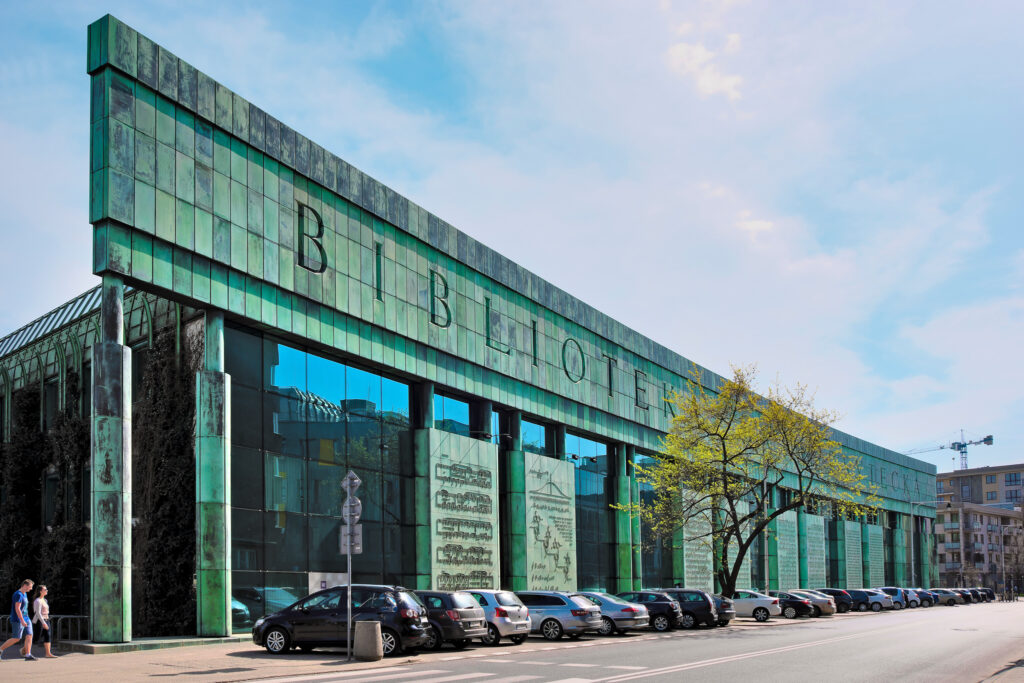 As for the library itself, that’s one of the bigger success stories to come from the mad 1990s – blessed by Pope John Paul II when it opened, other notable visitors have included George W. Bush who spoke here in 2001.