city center998 Communism25 prl49 sightseeing73 tourism66
Once a symbol of a Brave New World, the Ściana Wschodnia (Eastern Wall) running down Marszałkowska is more than just a 60s throwback… BY...

Once a symbol of a Brave New World, the Ściana Wschodnia (Eastern Wall) running down Marszałkowska is more than just a 60s throwback…
BY ALEX WEBBER

Although the war left much of Marszałkowska mangled and mauled, it is a misconception to think that the buildings of old were beyond repair. Despite this, the new regime saw little mileage in restoring them. Seen as too bourgeois and impractical for the post-war order, surviving tenements were bulldozed to make way for a new socialist realist city that would rise from the ashes. However, Stalin died before this objective could be fully realized and with Big Brother no longer watching Poland swiftly adopted new architectural strategies. Left with a gaping big hole to fill between what is now Świętokrzyska and Jerozolimskie, a competition was set in motion to find a suitable design. 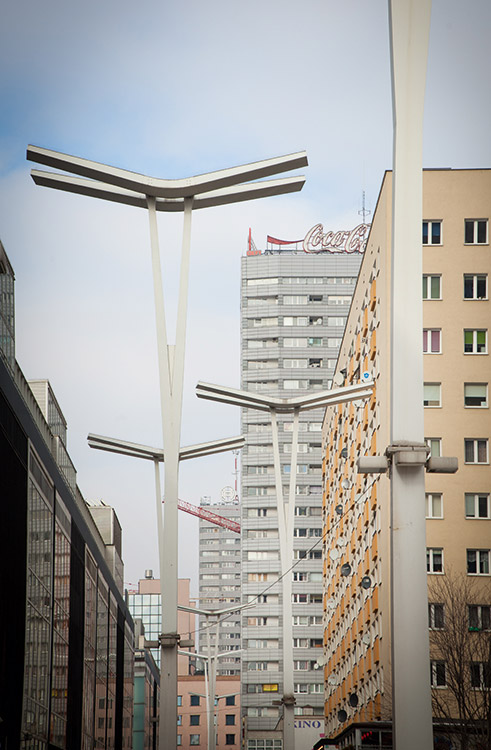 Won by Zbigniew Karpiński, his blueprint imagined a futuristic development that would counter-balance the looming hulk of the Palace of Culture. “This must be the Warsaw of the future,” wrote Architektura magazine, “a place full of cars, helicopters, scooters and fast life.” Though delayed by shortages of labor and materials, Karpiński’s project gradually rose between 1960 and 1970. Despite cosmetic changes both great and small, it survives to this day caught in a rare limbo between the past, the present and the future…

Forum Hotel
Completed five years after the rest of the Eastern Wall, the Forum Hotel represented the final element of this visionary project. With the Poles lacking the required technology and know-how to build such, Warsaw’s first ‘Western-inspired’ tower was actually designed by a Swede. Standing 96-meters high, its tobacco-colored facade left critics unimpressed: the author Jerzy Waldorff was so outraged he declared it to be Sweden’s revenge for their 17th century defeat at The Battle of Częstochowa. Regarded at the time as one of the country’s most luxurious hotels, its finest hour came in 1976 when ABBA checked into town causing the center to grind to a standstill. Since then the Forum has been rebranded as the Novotel Warszawa Centrum, and its garish exterior panels replaced by a glistening, silver skin. The underpass linking the Forum Hotel to the rest of the Eastern Wall was the first such subway in the country.

Rotunda
Nicknamed ‘the General’s Hat’ on account of its appearance, the Rotunda has for years been an iconic public rendez vous point for Varsovians too anxious to be seen waiting alone in a cafe or bar. Currently being renovated, a Krakow-based architectural studio has been handed the task of humanizing the area and has set about turning the Rotunda into what they say will become ‘a modern urban lounge’. Due to be completed in 2019, plans envisage a first floor gallery, cafe and visitors’ center, as well as an open, airy style far removed from the fortress-like darkness of the old Rotunda. This is not, though, the first time the structure has welcomed the workmen. 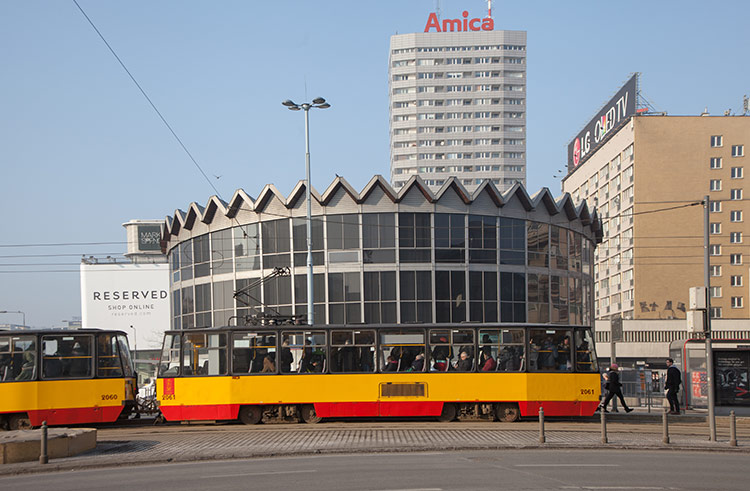 On February 15th, 1975, an explosion tore through the structure leaving 49 people dead – at the time, this ranked as Poland’s biggest post-war disaster. While the police blamed the blast on a gas leak, gossiping locals speculated that a bomb had been set off by embezzling bank officials looking to cover their tracks. Others theorized that the incident had been the doing of anti communist saboteurs. The building was reopened in 1979, this time with the addition of tinted windows and a memorial to those that died. Despite promises to the contrary, this has now been temporarily removed while work to revive the Rotunda takes place.

Universal
That big pile of asbestos-riddled rubble behind the Rotunda marks what was, until just months ago, the Universal building. Monstrously ugly, this shoebox-style carbuncle was once home to the communist era monopoly that handled foreign exports. 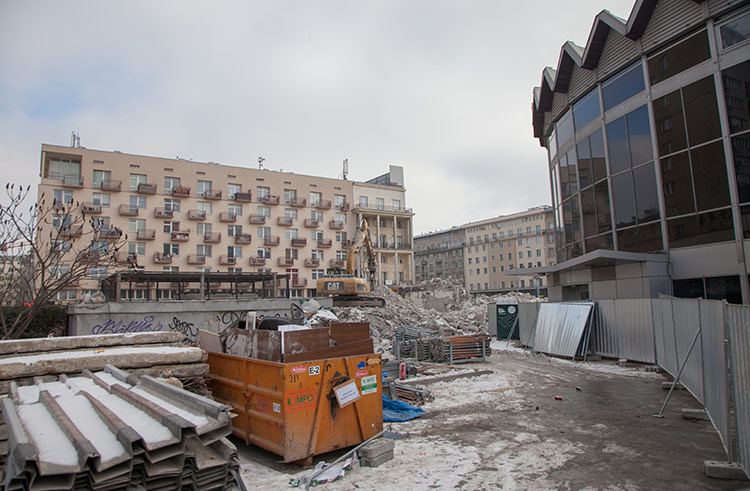 In more recent years, attempts to mask the quite hideous facade saw it used as giant billboard (at the time, the largest in the world), a move that backfired with locals and visitors alike left aghast by the sight of giant Bieber’s and Beckham’s endorsing underwear and aftershave. Purchased and subsequently demolished by the Austrian firm S+B Gruppe, the coming years will see a 95-meter tower rise in its place.

Pasaż Śródmiejski
Viewed as revolutionary at the time, the passage running behind the Eastern Wall was the first pedestrian precinct the nation had seen. Apparently modeled on the Lijnbaan shopping center in Rotterdam, it was originally lined with busy shops touting goods not just imported from the country’s commie friends, but also places such as Italy and Spain. 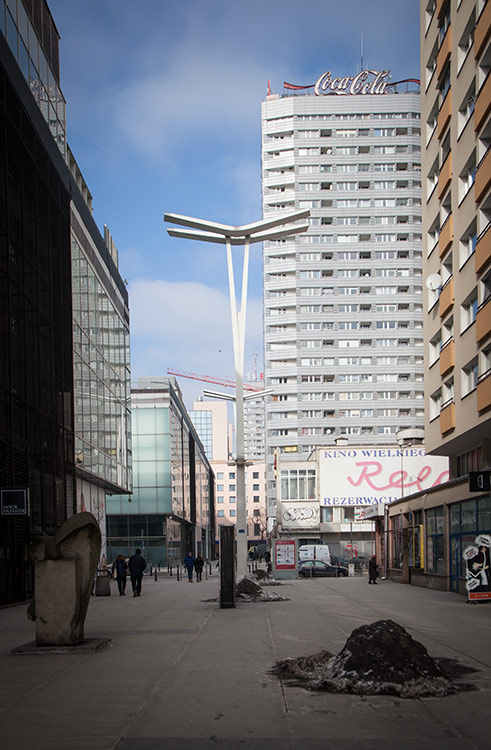 Self-service canteens such as Zodiak enjoyed a roaring trade, and the thoroughfare also became known as a center of nightlife with jewel in the crown being the achingly fashionable Amorfa wine bar. Redeveloped in 2006, many of the original features (overhead walkways and canopies, benches and flowerbeds) were removed, replaced instead by dodgy modern art, tall, winged lampposts and a dismal attempt at a Hollywood-style Walk of Fame.

Wars, Sawa & Junior
Despite their current soaring popularity with developers, mixed use projects are by no means a modern invention. Combining elements of residential, retail and office space, the Eastern Wall provided something of a prototype template to admire. Dealing with the retail arm of this were the Wars, Sawa and Junior department stores. Opened between 1969 and 1970, they elicited the kind of commercial lunacy you associate with modern day mega malls. Wars and Sawa were the first to launch and were promptly overrun by over 20,000 shoppers on opening day.

Unable to cope with the strain of such crowds, faults immediately became apparent: toilets overflowed and the ventilation failed. Nonetheless, consumers went wild. These scenes were repeated the following year when Junior opened its doors. The principal attraction here was the top floor Hoffland, a fashion emporium run by the glamorous Barbara Hoff. “Such was the pandemonium,” the fashion designer later recalled, “shop assistants wept and despaired.” A free-for-all developed and with the surging crowds openly thieving from the displays order was only restored when squads of police turned up. 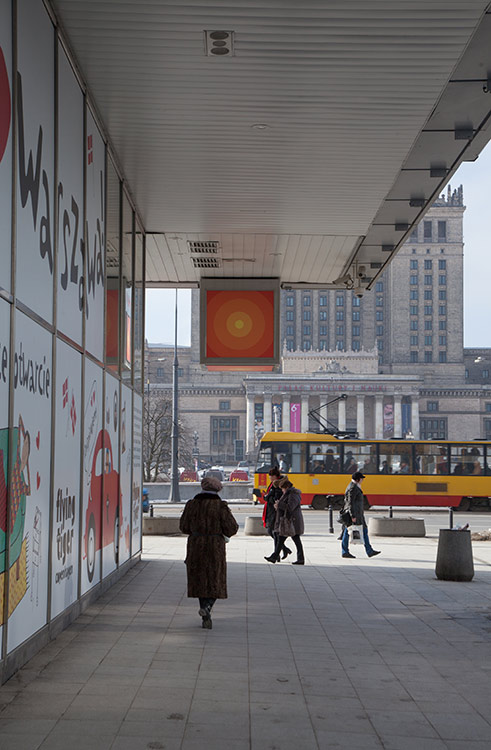 Poland’ s economic woes of the 1980s spelled an end to the glory years, and with empty shelves now the norm, queues would spontaneously break out the moment it was rumored that new goods were arriving. “It didn’t matter if it was toilet seats or slippers,” remembers one Insider associate, “we were trapped in a barter economy, so if word leaked that their was a truck of stock landing people would descend en masse hoping to get their hands on anything that they could later use to trade with their colleagues and neighbors.”

The department stores recovered their mojo following the political changes of 1989, though for male expats leftover from the wild 90s Wars will forever be best remembered as the home of the sleazy Arena strip club. Speaking to the Insider on the condition of anonymity, one Brit recalls it as a place of bonding, brawls and business: “You never really knew what would happen next. There were times you’d see guns just left out on the tables, but we went there regardless: I sealed so many deals during their Wednesday mud-wrestling nights!” All this is a far cry from today. Having received a face lift approximately ten years back, Wars, Sawa and Junior have settled down as safe havens for big brands such as H&M and Zara.

The Towers
The trio of residential towers that anchor the Eastern Wall had originally been intended to serve as hotels. Containing 200 living units each, features such as ground level concierge points were regarded as grand innovations. With stunning views below and the latest cosmopolitan gizmos at hand, those scoring am apartment here were roundly envied.

However, not all were quite so thrilled with their accommodation. In one of the more bizarre correspondences saved over from the PRL years, one woman wrote to the director of the Palace of Culture with a particularly curious complaint. “Dear director,” wrote the lady in question, “I live in the Eastern Wall complex opposite the Palace. Every night I have strong erotic experiences as a result of radiation from the television aerial on the Palace’s spire. This is extremely exhausting for me, so I hereby ask that the technological department conceals this aerial.” The woman signed off, quite forcefully, by threatening to “take action in person” if her grievance wasn’t dealt with. Perhaps alarmed by this threat, the building’s management invited the woman to the terrace directly below the offending aerial and told her that the equipment had now been removed. Seemingly satisfied by this, the complainant left and was never heard of again.

Kino Relax
With its name democratically chosen via a newspaper poll, Kino Relax was primarily known as the first cinema in Poland with the capacity to show movies shot on 70mm film. Super advanced for its time, it opened to much fanfare on October 24th, 1970, with the first film shown being a Soviet war drama titled Wyzwolenia. For decades it was revered as the top cinema in the city and was consistently picked to host national premiers of blockbusters like Star Wars. 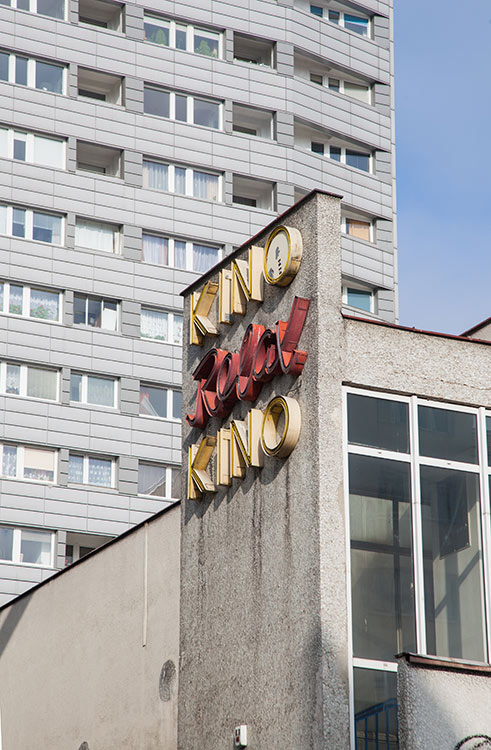 Though it was given a thorough update in 1998, Poland’s multiplex revolution was just round the corner: Relax never stood a chance. For years it gamely plodded on, before closing for good in 2006. Empty ever since, the building was purchased by Alma Market who proposed building a 185-meter skyscraper on the plot. The scheme was rejected by City Hall, and with Alma Market filing for bankruptcy last year it looks like the Relax building will continue living in limbo.

Sezam
Set apart from the Wars, Sawa and Junior stores, Sezam was the final retail component to the Eastern Wall – and also the biggest. Employing 300 people, it set a new benchmark for shoppers in PRL Poland. Later, a ghastly glass extension was added and would serve as Poland’s first McDonald’s. “It sounds daft now,” says one Insider, “but when McDonald’s opened in 1992 I was proud and excited – it felt as if Poland had at last joined the western world.”

The importance of their entry on the Polish market is by no means exaggerated. Thousands attended the opening, some dressed in suits especially for the occasion, others bearing flowers to give to the staff. Such was the clamor for zł. 25,000 hamburgers, a total of 13,300 transactions were recorded on the first day, a world record at the time. Neither was it just the natives that went loopy. “When I first came to Poland to work at the Bristol Hotel,” says restaurateur Ray Bridgeford, “I was picked up from the airport by the Austrian head chef. For the whole journey he wouldn’t stop rattling on about the new restaurant in town – turned out he was referring to McDonald’s!” Finally flattened in 2015, work is now underway to revive the space as a state-of-the-art office / retail development slated to open in 2018.