Always fearless, the Insider straps on the body armor and sniffs out some action with the local ice hockey gods.

Polish Stanley Cup winner Krzysztof Oliwa grew up playing hockey on the ice of his native Tychy before moving on to a successful NHL career with the likes of the New Jersey Devils and the Pittsburgh Penguins. Nicknamed the “Polish Hammer,” 6 foot 5 inch Oliwa was an imposing presence in his role as an on-field enforcer, starting more than 400 punch ups during his illustrious 13-year pro career.

I, on the other hand, lost my last ever fight in the school playground some 17 years ago on a unanimous decision, and my only experience of NHL glory came during victorious triumphs over my brother on the classic sport’s game Slap Shot in the halcyon days of the Sega Master System II.

That might explain why there were more than a few butterflies as I laced up my skates before my first ever ice hockey training session last month. I’d arrived at Torwar II ice rink, the home of the capital’s only ex-pat team, the Warsaw Beavers, some 15 minutes earlier, to see the Beavers assortment of Canadians, Americans, Poles, Finns, Swedes, Slovaks and a Bavarian flying round the rink at lightning speed. But it wasn’t the quickness of the play alone that got my heart beating extra fast, it was more the echoing noise of the puck smashing in to the wall, as well as one of the players angrily whacking the glass in frustration after a missed shot.

Formed by a group of six Canadians in 2009 the Beavers community now numbers some 100 people including players families and friends, and according to the team’s Tim Constable, while the players take the two weekly training sessions seriously, the club is as much about the social aspect of getting together for some “liquid sustenance”
as it is about the hockey.

Luckily for me I was only on a watching brief as far as the skillful Beavers were concerned. I was next up on the ice though, playing with a team of amateur Poles coached by Legia Warszawa player Grzegorz Rostkowski. A friend of mine who happens to be the exact same height and shoe size as me had volunteered to lend me the gear and before I knew it I was in the changing room getting ready for some serious combat. This was about the time I realized that this isn’t just a game, this is war. With various layers of armor, massive protective gloves, gum shields and helmets, I felt like I was preparing for the Battle of Agincourt rather than a late night workout.

But once I was fully padded up a quick look in the mirror convinced me that I definitely looked the part, the only concern now was whether the brain had retained any of the old roller blading skills from my teenage days. One exploratory lap around the ice got the legs in to gear and almost convinced me that I’d still got “it” before coach Grzegorz skated backwards past me and said in a strong Polish accent “Hello, how are you?” Before I’d got the first letter of good out of my mouth I was spinning in circles and crashing spread eagle on to the ice. No talking coach, just skating.

Apart from the odd fall though, this was seriously good fun especially when about 20 pucks were chucked on to the rink. It’s not as easy as it looks when you’ve got to wield a 1.5 meter long plastic stick around, but I guess I was doing pretty well as people started passing to me. I even managed to score what could be my only ever ice hockey point. Seeing an unguarded puck lying about 50 cm away from the goal line I pounced with the agility of a snow leopard and flicked it in with a quick flash of the wrists, to end the day with a very respectable career statistic of one match, one goal. Beat that, Gretzky. Admittedly, there was no goal tender but a goals a goal in my book.

It was then time to give my mate his kit back and let the boys get down to some serious drills. Viewing the action from high from Torwar’s one stand the players were being put through their paces with various passing, shooting and possession exercises. There were some talented players out there but while the standard was good it was clear that if you’re a relative beginner to the sport you’d have no problems getting involved: just so long as you don’t mind the issue of training at 11.45 p.m. every Thursday.

To get in touch with the Beavers contact Tim at warsawbeavers@gmail.com or look for the clubs page on Facebook. 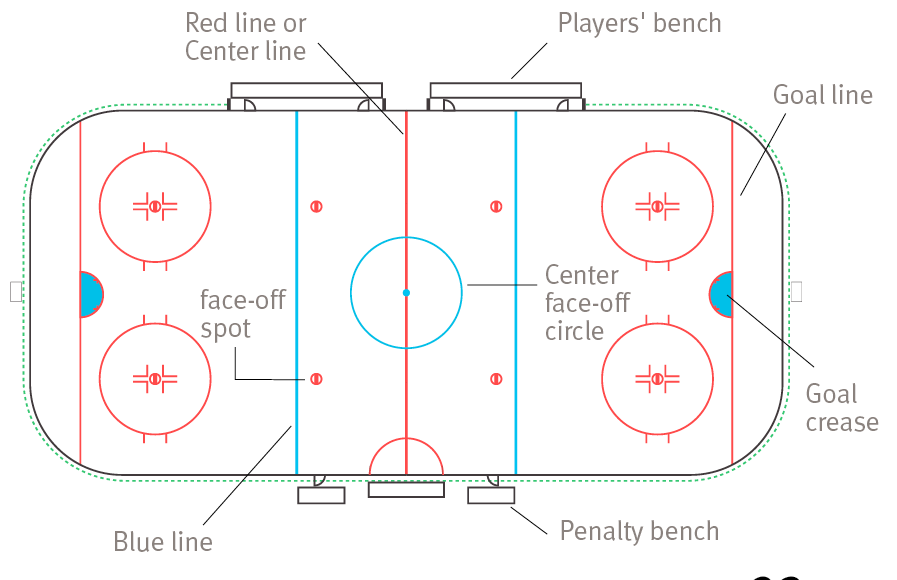 Cherry picking
When a player stays near their opponent’s defensive zone waiting for a pass in order to breakaway.

Face off
The method used to start play at the beginning of a period or after a stoppage of play.

Five-hole
The gap between a goaltender’s legs that you can score through. “He picked the five-hole.”

Puck
The hard rubber disk that acts as the ball.

Shaft
The long part of the stick.

Waffle
The goalie’s blocker, a type of flat glove the goalie uses to stop the puck.