Best of Warsaw 2020: Best in the Neighborhood | Warsaw Insider

Best of Warsaw 2020: Best in the Neighborhood

With more people than ever refusing to leave the immediate radius of their homes, never before has having a quality neighborhood haunt been more...

With more people than ever refusing to leave the immediate radius of their homes, never before has having a quality neighborhood haunt been more important – this issue, we bring you a few of the standouts that make staying local an undisputed joy! 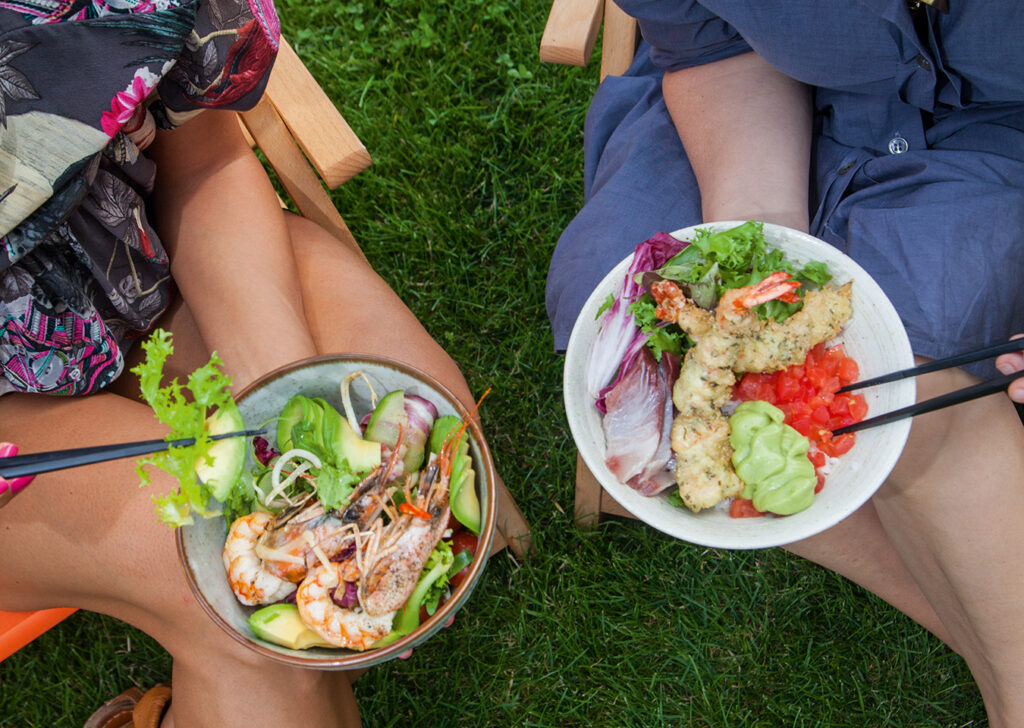 At Shoku, the mix and match approach when it comes to Asia (if it’s tasty, stick it on the menu!) feels rational and put together. Never short of custom, locals gather inside a bright, contemporary space to slurp down bowls of ramen, share shoku bowls or click chopsticks over small plates of dim sum and wonton.

This neighborhood café offers a human touch in an area filling itself with gleaming glass blocks and gated compounds. Acting as a magnetic force, the homemade nitro machine (“I just like making things,” says the owner), is a thing of legend. 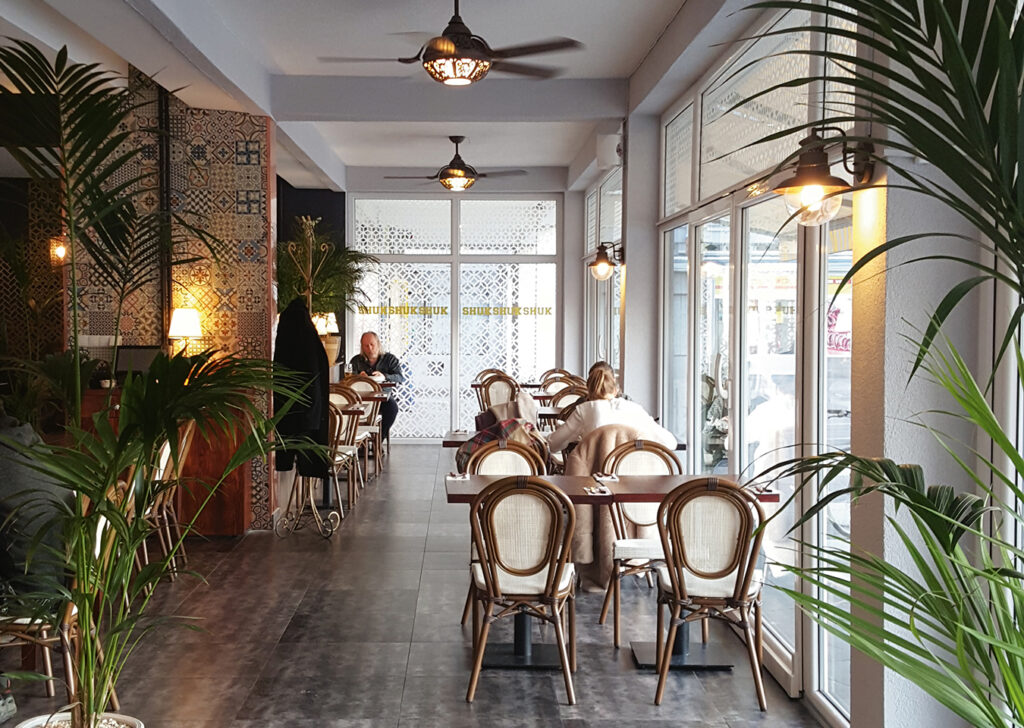 For Middle Eastern tastes with a vegan spin then its to Ochota that most people head. Specializing in mezze plates, pide breads and bowls of shakshuka, it’s a special place that has the ability to realign your mojo on an ashen Warsaw day.

Say the name with reverence: Poland’s first specialty coffee café is still going strong after 13-years of business, and that’s on account of their fiendish devotion to quality and product. The clattery, boho atmosphere helps as well, creating an atmosphere that’s ideal for catching up on emails. 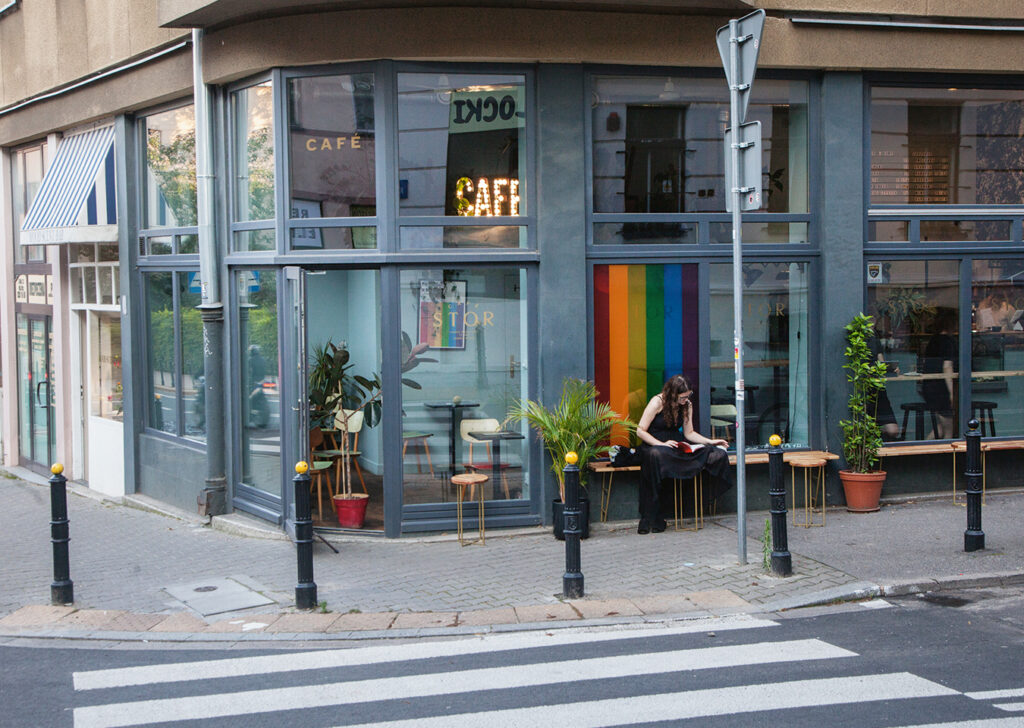 Heaven for freelancers and people watchers, visitors bask in natural light amid outbreaks of greenery and quirky design touches: over some of the best specialty coffee in the city, time runs away here and before you know it hours have passed. Though it feels like a neighborhood warrior, it comes as no surprise that Stor’s patrons hail from all over Warsaw.

The combination of vinyl and coffee ain’t nothing new, but at Asfalt you feel that the very heart of the concept has been completely remastered. Take stock of your purchases over alt. coffees served inside mugs crafted by the nearby Fenek ceramic studio.

Focusing each month on a different region of the country, Robert Trzópek’s tasting menu takes diners to the very heart of the Polish soul and does so via tastes that betray his fine dining background: delicate and precise, it’s the polar opposite of the mundane Polski feast. For many, it’s the best restaurant in the city!

Refusing to take themselves too seriously, the angle is fun and forward-thinking, something that’s evidenced by way of an occasionally wacky menu of Americanized Asian food (the matcha ice cream donut is insane in both idea and taste!). The cocktails are equally eccentric yet also reveal some devastating talent: the Kimchi Mary is pungent, punchy and above all potent!

The engaging bistro vibe aside, it’s the manner in which they marry food and drink that really strikes a chord. The inventive cooking of Rafał Hreczaniuk is already well-known around the city, but credit also to co-owner Maciej Sondij who has built one of the country’s finest and most exciting wine lists.

Head to this warm den to sink inside comfy retro chairs and wallow in the natural light that seeps through the window. Prepared on a Nuova Simonelli machine, the coffee hails from a range of pedigree roasters such as Warsaw’s own Coffee Lab. Creaky wooden floorboards, local artwork and non-obtrusive colors make it a prime perch after a wintry prowl through the parks of Powiśle.

This rail-side communist pavilion has been transformed courtesy of a thorough makeover featuring a jungle of plants, low, muted lighting and the addition of smart charcoal colors and revamped retro fittings. Food-wise, expect natural Polish flavors galore: the potato pancakes with goulash are a winner. 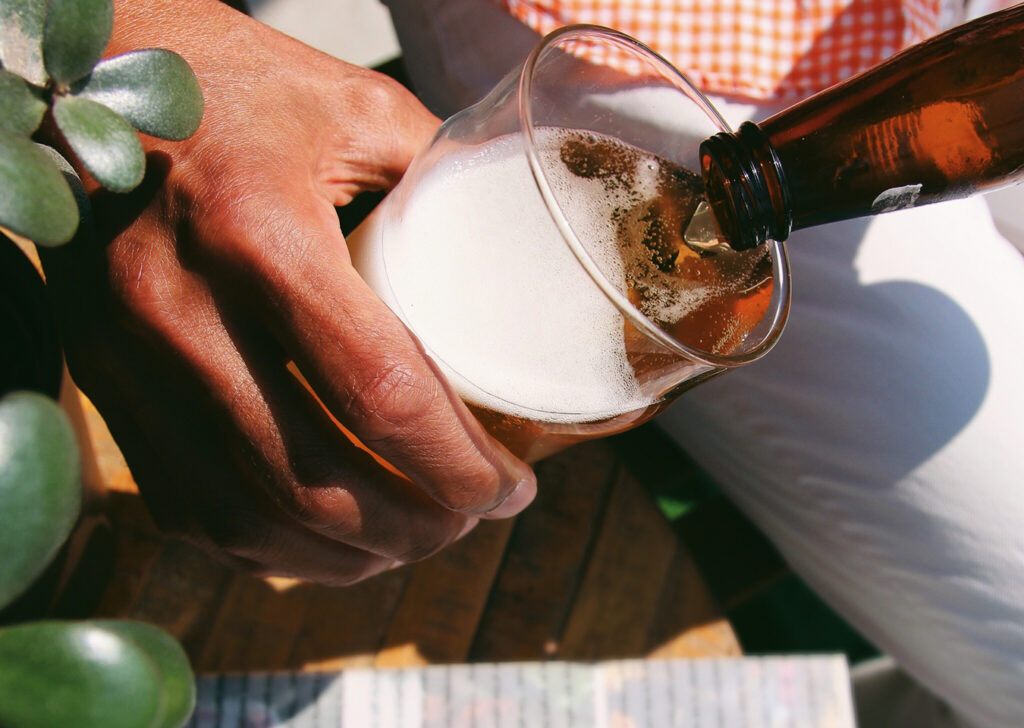 While many locals rightfully claim The Beer Store to be the best bar in the district, it’s original function as a shop should not be forgotten either: there’s 400 beers to pore over, with the international range including a number of progressive breweries. Without this place, Wilanów wouldn’t be the same!

A colorful venue that describes itself as half café/half gallery. Find plenty of pops of color from the Polish poster are on the walls, bookshelves filled with literature that broaches arty subjects and a menu that celebrates local produce and artisan tastes.

There’s no shortage of ethnic tastes in Wilanów, but none elicit quite the same enthusiasm as Thai Street, an attractive and contemporary space whose menu hits home runs with its aromatic Asian cuisine. 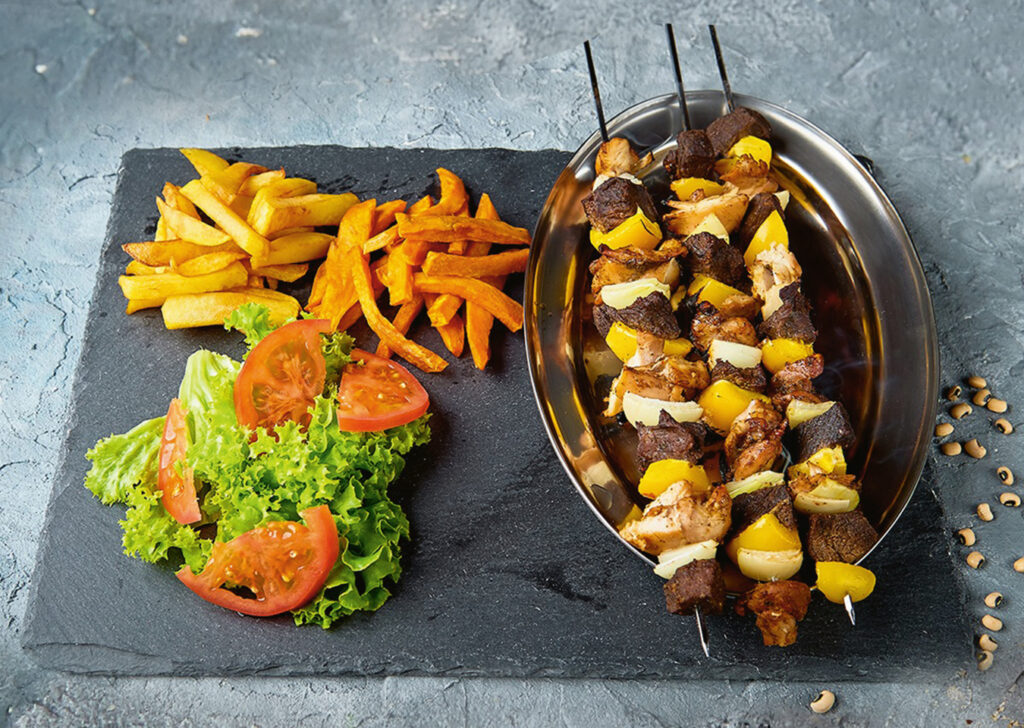 African restaurants have traditionally floundered in Warsaw, but there’s no danger of that happening at Tako, a cheerful venture whose trump calling card is an exotic menu offering spicy onion and mustard stews, meat pies, fried plantains and other delicious diversions.

Found in an ugly pavilion and decorated with beer mats and signed cymbals, this Ursynów legend never fails to lift the mood. A place of boozy banter and backslaps, the sheer friendliness of this locale makes it one of Warsaw’s under-the-radar gems. 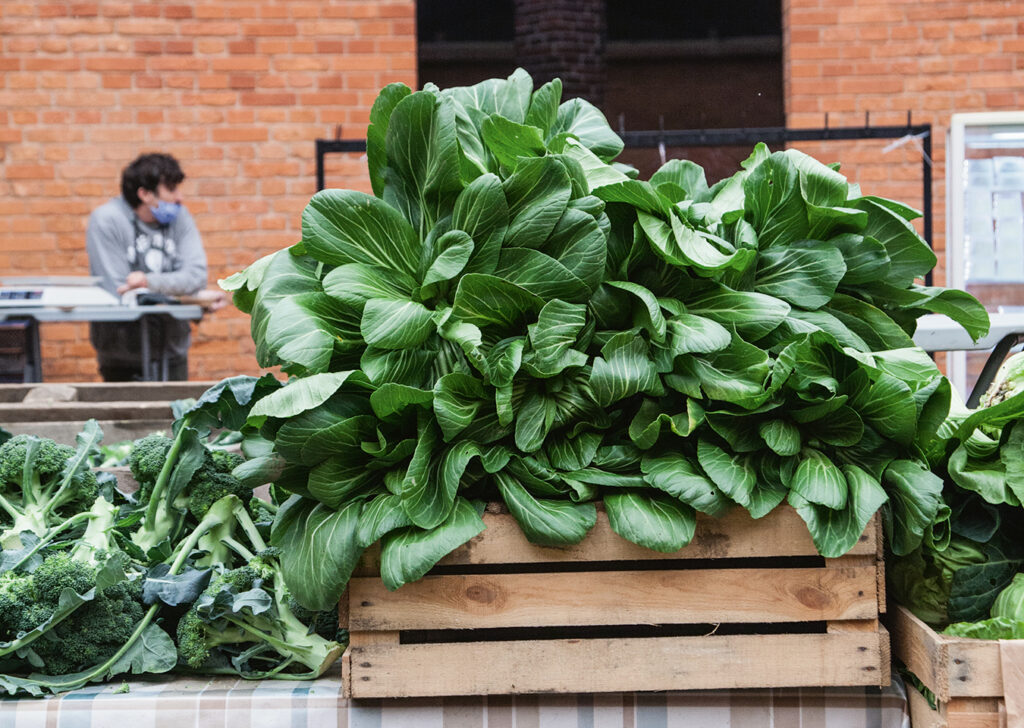 Spot the stars of Warsaw’s restaurant scene perusing the stalls at this weekly farmers’ market. Held each Wednesday, look for Pan Ziółko, Poland’s first celebrity farmer (!), Portobello’s from the country’s only organic mushroom farm and the magical yogurts from Mleczna Droga Manufaktura Serów.

A standard bearer for eco-minded meals, arrive early for Huveos Rancheros or bowl in later for mains that number BBQ Tofu Burgers with Bourbon. Sporting decorative ceramics, colorful hexagonal floor tiles and soothing white finishes, chilling out becomes even easier over a cinnamon cider or a Spanish bio wine. 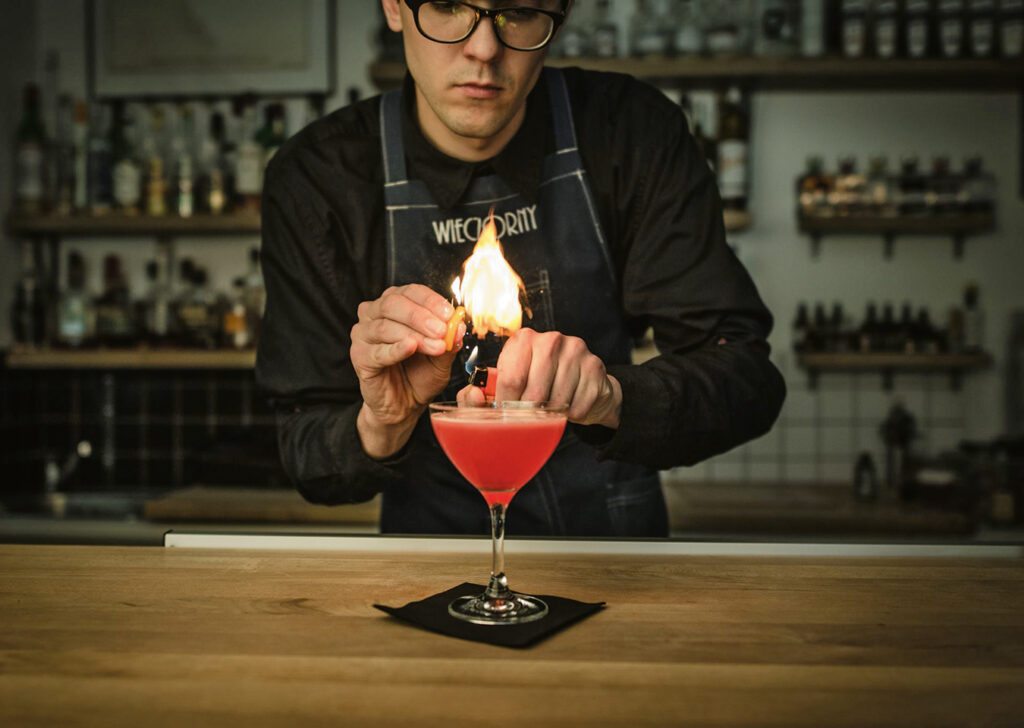 Fixed by some of the biggest names in Polish cocktail culture, the drinks are a serious biz here and, in brighter months, neatly complimented by a beautiful garden set with little lights dangling from the trees.

A haven of ecologically certified goods and produce, everything you need to pursue a bright, happy life is here on this spot: fresh fish, cheese, eggs, bread, cured sausages, honey… and on it goes.

An evergreen institution, the specialty coffee at Relaks commands respect across Poland. Jacketed in chipboard panels and retro posters, the buzz has lasted so long as to become ingrained in their DNA. 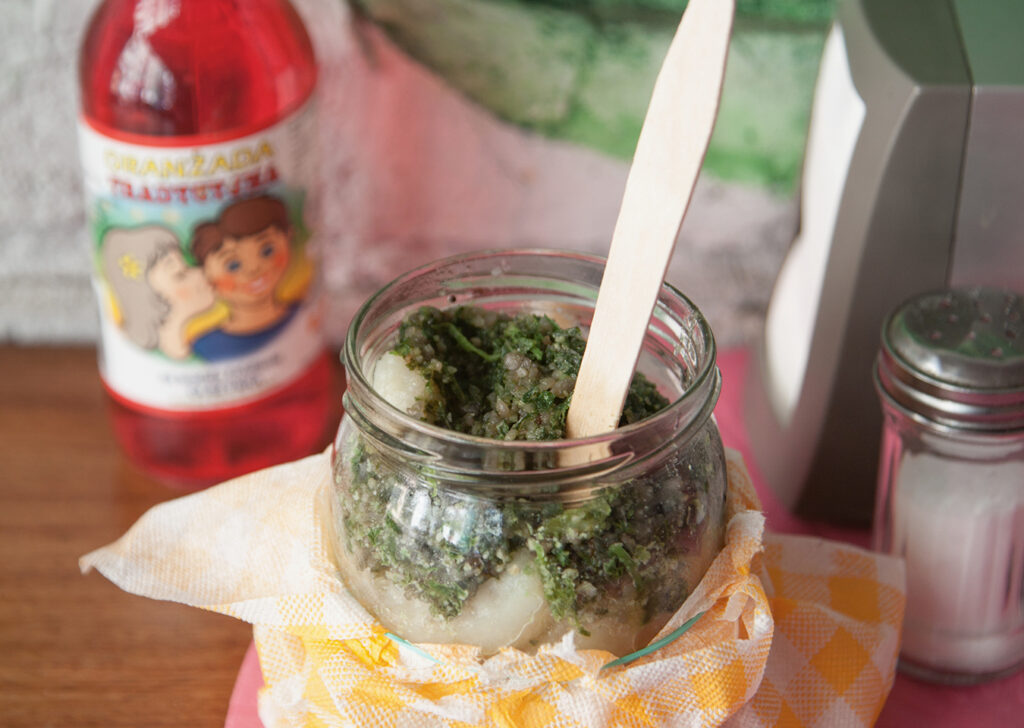 Insulate yourself against the chill with a hearty helping of homemade dumplings that are squished into jars. Budget-minded in both cost and appearance, it’s become one of Praga’s worst kept secrets with several of Poland’s top food writers praising it to the hilt. Filled with a wide cast of characters, nowhere does a better job of expressing the district’s soul than this ramshackle eatery.

Founded in 2001, The Bald Penguin was a pioneer of local nightlife and maintains a rugged aesthetic that feels pleasingly Bohemian: scruffy, wooden furniture, loud and lively music, fridges of craft beer and a dark, grubby toilet accessed through the bar. Great stuff!

More than just a café, at Proces visitors can live out any secret barista fantasies to learn first-hand the secrets behind roasting and brewing specialty coffee. Beyond their rather good coffee, find also a slew of Made In Poland soft drinks and fermentations. 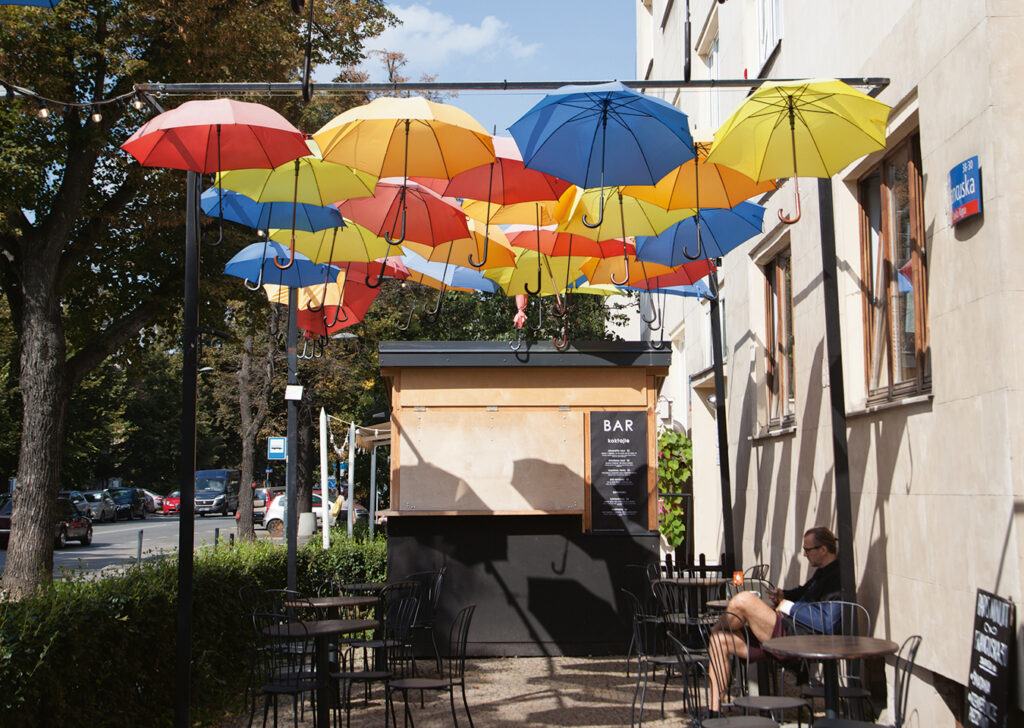 The brollies that dangle teasingly over the terrace are one of Saska’s most photographed sights, but this café earns its visitors by providing ace coffee brewed using Chemex, Aeropress and Drip methods, as well as a range of French crepes and above-average cocktails. Cool, minimal and reassuringly artistic, it’s a café that feels central to the social function of Saska.

Saska’s nightlife is limited to the point of being virtually non-existent, so the existence of Towarzyska is welcome indeed. Set inside a 1950s pavilion and signposted by zippy neon sign, find a cool café on ground level, and a moodier space downstairs that has the atmospheric feel of a David Lynch film.

Creaky floorboards and references to the address’s former function as a tailor’s shop lend a warmth that’s particularly pronounced once the overhead draftsman’s lamps are switched on. Homemade cakes, hipster colas and coffee sourced from the likes of Gesha keep it packed with a friendly crowd of local aficionados.