Martin Gimenez Castro Some disclosure: voting in our juried categories tends to be tight and tense, and this year was no different – but... 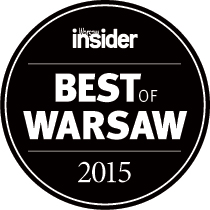 Martin Gimenez Castro
Some disclosure: voting in our juried categories tends to be tight and tense, and this year was no different – but if there was one exception that saw a landslide winner it was this one. Galloping to victory by a country mile was Martin Gimenez Castro, a man many still associate as being the crowned champ of the 2013 Top Chef series. That triumph, however, vindicated what some knew already: that here was a man of considerable talent. Reinforcing that opinion is ‘what happened next’. For that, first look at Salto. Charged with giving the Rialto Hotel the restaurant it deserved, Gimenez Castro has since forged one of the finest gastro experiences in Poland: exquisite fine dining with a thrilling Latin twist. Then, in late 2015, came a second venture, Ceviche Bar, a more casual eatery designed to give vent to the chef’s South American culinary emotions. In the process the Argentinean has jump-started a Warsaw trend, whilst displaying the ability to juggle two brilliant spots of divergent personality.
Also nominated Andrea Camastra (Senses), Trisno Hamid (MOD), Elisa Nicolas (Tapas Gastro Bar), Chanunkan Duangkumma (Thaisty)