A city of bewildering, scrambled styles, Warsaw presents an eccentric ensemble of aesthetic contrasts. But that wasn’t supposed to happen.

Warsaw, 2014: faced with a visitor from outer space, how would you describe the city’s architecture? Myself, it’s not a question I dwell on (if I saw an alien I’d hide), but I’m sure words like chaotic, disorganized and ad hoc would be common. The challenges of the 20th century have left Warsaw with a layered patchwork look and a spontaneous style. Personally, I kind of like that: to rely on a weak analogy, it reminds me of kids playing football – everyone chasing the ball, playing for themselves, not the team. The greater good, the bigger picture: both can get stuffed. It’s left the capital looking like a giant jigsaw where none of the pieces fit. Those inconsistencies are compelling.

It could have been so different. Now there is a temptation to attribute the city’s aesthetic directly to the war. There is obviously a truth in that, but that overlooks the fact that long before the sound of goosesteps were heard plans were afoot to reinvent the city. Before the outbreak of WWII, Warsaw had been earmarked to host the 1944 Polish National Exhibition: something described by Archimapa as “an immense showcase of the achievements of the independent Polish State and its plans for the future.”

To coincide with it the eminent architects of the day laid plans to build scores of buildings: the crowning point was to be a vast development named in honor of Józef Piłsudski that envisioned a new city center stretching pretty much from what is now pl. na Rozdrożu to ul. Żwirki i Wigury. A considerable slice of Saska was to hold the exhibition grounds, while Gocław was to become something of an airport district.

The dream turned to dust with the Nazi occupation. In fact, Warsaw was turned to dust – 84% of the city stood in ruin by the time the Germans exited taking stage left. Even without the deliberate destruction that followed the Warsaw Uprising, Warsaw as we know it didn’t stand a chance under the Nazis.

As early as 1939, Hitler’s town planners had conceived something that would later be known as the Pabst Plan after its chief instigator – Friedrich Pabst. In it, he envisioned 130,000 ethnic Germans living on the left side, and a slave labor camp on the right of 80,000 Poles. Only the old town was to be spared, the rest of the city was to be razed and rebuilt in a Germanic style.

With the war over, and Warsaw in ruins, it was a bold move to rebuild the city – for a time, calls were made to forget the whole thing; to leave Warsaw as a shattered monument to war and relocate the capital to Łódź. This, however, was viewed as an unlikely long-term solution – the propaganda benefits of rebuilding the capital were not lost on the new powers in charge. The trouble was, they didn’t have much of a policy. 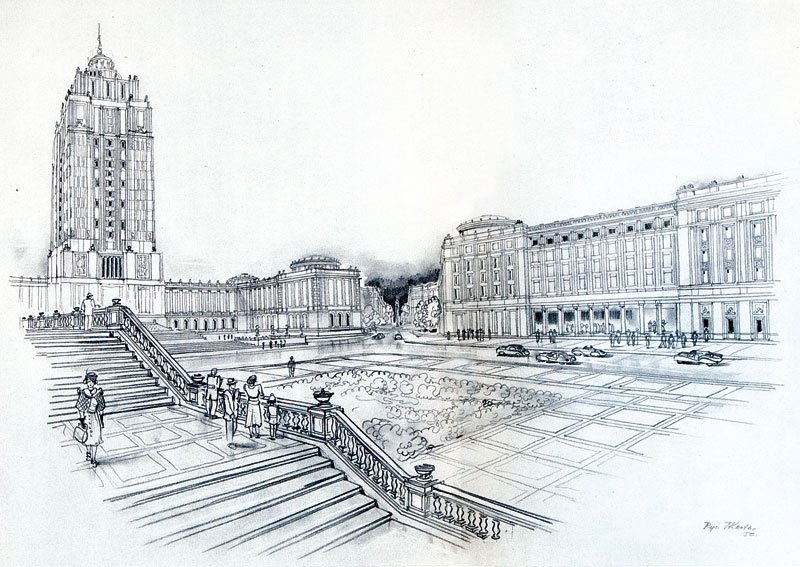 Sure, construction on the socialist paradise of Mariensztat began in 1948, but it was only in 1949 Poland was strong-armed into adopting the soc-realist style in its architecture. What followed was an outpouring of fantastical ideas that saw Warsaw reborn as a Utopian heaven. “You hear a lot of pre-war comparisons claiming Warsaw to have been the Paris of the East,” says Marcin Grabowski of Warsaw Behind the Scenes (warsawscenes.com), “but that’s not the whole story.”

While salvaged newsreels tend to depict a dynamic city full of glamorous Gatsby receptions, the reality was different. Much of Warsaw was a slum. Raw capitalism had left the city with a legacy of Dickensian, darkened tenements the likes of which would make you shudder. The situation was aggravated by the Tsarist fortifications ringing the city, stopping outward growth and crushing the proletariat into squalid apartments. It is a fallacy to think pre-war Warsaw was one big champagne party. Now though, Warsaw was a blank slate. “Architects genuinely wanted to help the people,” says Marcin, “to build them a better future. The trouble is, their ideas were then hijacked by the Party for propaganda purposes.”

On this note, he thumps a book down on the table. It is the size of a laptop and considerably heavier. Sześcioletni Plan Odbudowy Warszawy parps the title – translated, The Six Year Plan for the Reconstruction of Warsaw. The author is Bolesław Bierut, Poland’s post-war communist leader. It is mind-boggling in detail: both an intriguing insight into the past, and a fascinating glimpse into a future that never was. 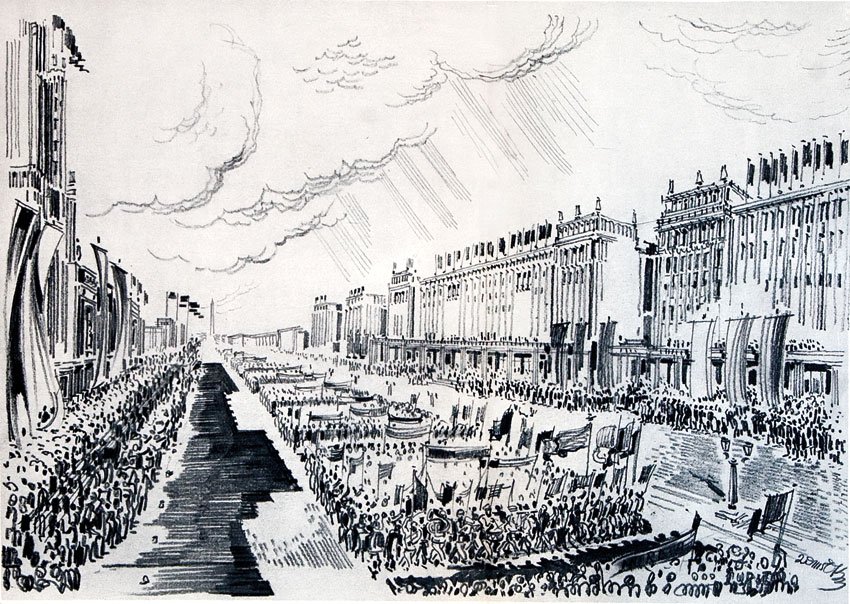 It begins predictably: there are pictures of Bierut mucking in with construction workers, a portrait of Comrade Stalin, and then pages and pages illustrating the pre-war rich/poor divide. It is cult-like in both repetition and message, and the message of Bierut’s ghost writer is clear: we are building paradise. It is easy to be cynical, but many of the right considerations were there. “What was being presented,” says Marcin, “was a dreamland for many when you think how they existed before – no electricity, no running water. And for the architects, well, you can compare it to building Sim City.”

“The idea was to create space for people,” he continues, “and that wouldn’t have been possible before. Now it was.” On Bierut’s decree all property was appropriated by the government – all of a sudden, architects wielded greater powers than ever before; if they wanted to build a park here, or a wide avenue there, they could. One of the cornerstones of this plan for a humanist city based on light and space was to slip a green noose around the center. But rather than strangling the city, it would let it breathe – in total the projected greenbelt was to measure four times the length of New York’s Central Park. “We shouldn’t view these times through black and white colors,” says Marcin, “some of the ideas were positive.” In the end, however, only a fraction of this green corridor was realized: Powiśle.

Of course, there were plenty more projects that were to fall by the wayside, as the book serves to reveal. The PASTa Tower, on Zielna 39, was geared up to become the new City Hall. The sketches of architect Jan Knothe present an unrecognizable PASTa, one that forms the centerpiece of a large square penned in by buildings not dissimilar to those found on pl. Konstytucji.

“The survival of pre-war Próżna street is often hailed as something of a miracle,” says Marcin, “but the truth is loads of the buildings in the vicinity survived.” They didn’t, however, survive the post-war architects who saw such buildings as too cosmopolitan and impractical – surplus to their view of the Brave New World that was being built. And so it was that a city already smashed to smithereens found many of its surviving buildings being torn down.

But only a part of this project came to fruition – the flank of Marszałkowska that faces PASTa. The moment Stalin died, plans for a socialist realist city were erased as Poland embraced new architectural strategies and social ideologies. And what plans they were. Perhaps the most bizarre saw the area where the Sheraton now stands designated to become a granite amphitheater carved into the escarpment. Plac Unii Lubelskiej was to be transformed into another square, its crowning achievement being an epic tower that brings to mind a mini hybrid combo of the Empire State Building and the Palace of Culture. 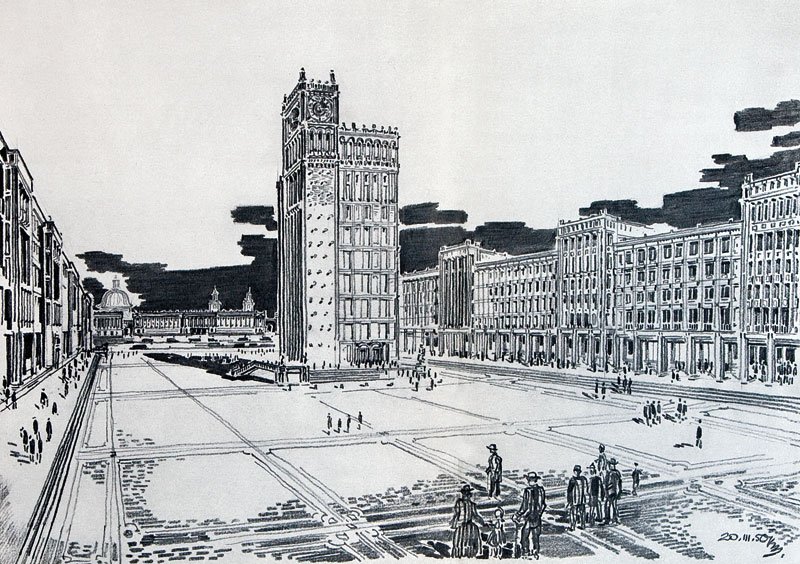 Not all surviving structures were threatened with outright demolition. While much of Marszałkowska was cleared when it could have easily been saved – the street was widened to three times its pre-war size – others parts of Warsaw were safe… in theory. “The Party didn’t have much time for the church,” says Marcin, “but even they realized that knocking places of worship down would be too much for the population.”

Instead, they thought of ways to lessen the churches overt physical presence. In Knothe’s visualizations, Savior’s Church on pl. Zbawiciela was to have its spires chopped off, thereby making it far less prominent on the new-look skyline. “If Stalin had lived another five years,” smiles Marcin, “Warsaw would have been unrecognizable to what we see today.”

While many of the realized plans revolutionized and improved standards of living, the future wasn’t bright, it was grey. Imagine a city looking exclusively like pl. Konstytucji or Muranów – all wide boulevards and uniform buildings. “Living conditions were much better,” says Marcin, “people had proper heating, electricity… but it became less attractive for, how can I say it, for actual life. For the soul. The wide, open spaces they were building killed the life of the city – walking past some of these huge structures that were finished, you feel like an ant on the moon.”

Ironically though, even today the consequences of Bierut’s vision are being felt. The following decades presented different ideas, but by the 80s Warsaw had fallen into stagnation. “The Party had other things to worry about,” grins Marcin, “so the construction we saw was limited to stop-gap solutions.” Now, however, after the cowboy years of the 90s, Warsaw finds itself hamstrung by Bierut’s decision to seize private property.

“The open bits around the Palace of Culture,” says Marcin, “have about seventy pending restitution cases alone. If you’re a developer, are you even going to consider buying a plot if you face seven court cases for a slice of land – sure, you might win one, but would you win them all? Would you even take the risk?” And so, the story of modern Warsaw comes full circle, its trajectory curving all the way back to Bierut’s big ideas.