Everyone passes through it, and usually without much second thought. But Pl. Bankowy has a background every bit as gripping as  Warsaw’s more celebrated squares…
By Alex Webber | Photographs by Kevin Demaria

Described by one architect as a ‘tarmac desert punctuated by tram stops’, Pl. Bankowy belies its own grandiose name. Those envisaging a historic banking quarter instead discover a sprawl of traffic encased within a haphazard assembly of buildings with little consistency connecting one to the other. In a city characterized by indiscriminate planning, this square is perhaps the most spasmodic of them all.
This was not always so. Conceived in the early 19th century, Pl. Bankowy was actually born as a triangle: cited as one Warsaw’s finest districts, pre-war photos depict cobbled roads flanked by elegant institutions. After the devastation of WWII, only two sides were rebuilt, the street widened and its original triangle shape squeezed and molded into a rectangle. Presto, you have what you see now. But don’t let its arbitrary nature fool you, nor its reputation as simply a thoroughfare. While its importance as an artery is indisputable, there’s more to Bankowy than often meets the eye… 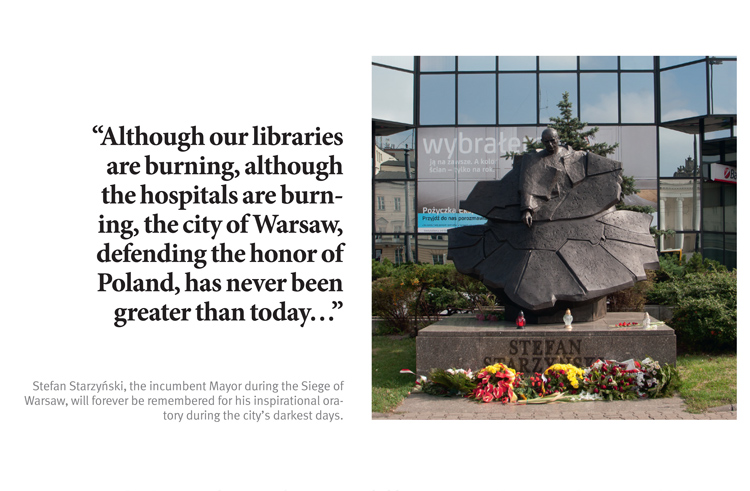 The East Side
If Bankowy looks unsynchronized and top-heavy then the primary culprit is ‘the Blue Tower’. One hundred and twenty meters in height, construction began during the ’60s, though was suspended once the bottom fell out of the Polish economy. Making the ongoing saga of Złota 44 look insignificant in comparison, the tower’s steel skeleton loomed over the rest of the square for years; in all, the building took a staggering 26 years to finish before being officially opened in 1992.
An enduring legend has it that this was only after a rabbi lifted a curse that had been placed on the land. Previously, the plot had been occupied by the Great Synagogue, a house of worship that had been the center of Warsaw’s pre-war Jewish community. Built in the 1870s to a design by Leandro Marconi, its vast interiors held over 3,000 worshippers, making it one of the largest synagogues in the world. Its end came in 1943 after the Jewish Ghetto Uprising had been crushed by the Nazis. In celebration, it was dynamited after the collapse of Jewish resistance with General Jurgen Stroop personally detonating the charges. “What a marvelous sight it was,” he wrote, “a fantastic piece of theater.” But while it’s widely reported that a rabbi later hexed the site, there’s little to suggest this was actually the case.
Hidden behind the tower, the area’s Judaic past is commemorated in the often-overlooked Jewish Historical Institute. Found on Tłomackie 3/5, it’s far removed from the shine and dazzle of the high profile Polin museum. Home to ‘the underground archive of the Warsaw Ghetto’, this dusty foundation is also noted for compelling exhibitions presented in the traditional manner. Devoid of the crowds that pile into Polin, it offers a far more private experience and comes highly recommended.
Switching back to the front of the Blue Tower, pedestrians won’t fail to pass the statue of Stefan Starzyński poring over a map. While the artistic merit of the sculpture has been questioned, Starzyński himself occupies a place in the heart of every true local. As the Mayor of Warsaw, it was under his watch that the National Museum came to fruition, 44 schools were opened, and over two million kilometers of roads built. For all that, he is best remembered for rallying Warsaw during the 1939 invasion. With the city under siege, his rousing broadcasts united the town. Arrested after a week after Warsaw fell, an investigation conducted last year concluded that he was shot by the Gestapo in December ’39. The least said about the rest of the East side, the better. Originally post-war plans had mooted the development of a pedestrianized area interspersed with greenery, and a small square framed by low-level apartments. Instead, what Bankowy ended up with was an eyesore of a block. Move along please. 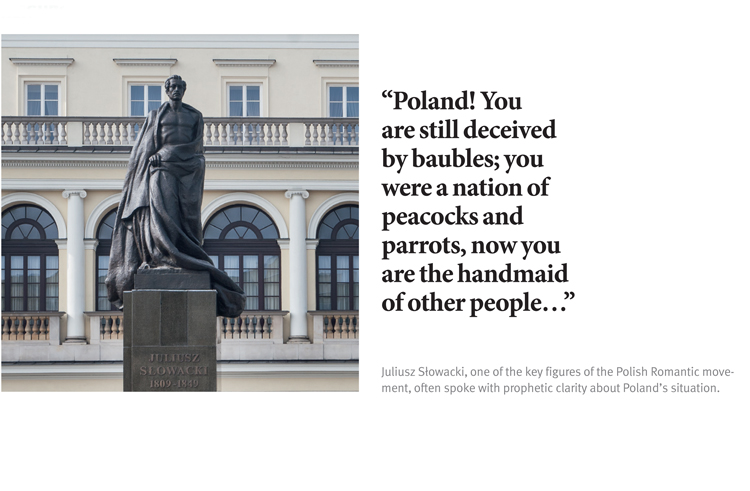 The West Side
Passing a forest of traffic lights, cross to the other side and be confronted by the officious form of City Hall. Sketched out by Antonio Corazzi, the one-time treasury building is where a young Juliusz Słowacki worked as a trainee clerk. Along with Mickiewicz and Krasiński he would later go on to become one of the three bards of Polish literature, and a patriotic voice for the nation at a time of 19th century Tsarist repression. That’s his statue outside. Looking oddly vampire-like, the monument stands on the plinth where Feliks Dzierżyński once posed. Dzierżyński, who rose to command the Soviet secret police in the ’20s, had this whole square named after him during Communist times, and the 1989 toppling of his statue was seen as a landmark event.
The Corazzi influence extends all the way down the Western side, with the domed structure on the corner once serving as the Stock Exchange when it was unveiled in 1828. Rebuilt in 1954, the succeeding decades saw it function as a museum documenting The Polish Revolution, before being handed over for its current use: The Museum of the Collection of John Paul II. Visitors should forget the late Pope, as the dark exhibition is actually a compilation of works amassed by Janina and Zbigniew Carroll-Porczyński. Featuring 450 impressionist pieces, represented artists include Renoir, Rembrandt and Rubens. So why the lack of visitors? That’s explained by the provenance of the art. Some are proven forgeries, yet more can only be attributed to the workshops of these masters, and not the artists themselves. Nonetheless, poke around, the startled museum attendant looks like he hasn’t had human contact for years…

The South
A recent refit led by Allan Starski (who won an Oscar for his part in the set design on Schindler’s List) has restored Pl. Bankowy 1 back to its best. The courtyard, with its brickwork and stacked, metal fire escapes, is reminiscent of brownstone New York, and the revamped building home to the Der Elefant restaurant, not to mention several high-end enterprises such as a celebrity barber.
Find it attached to the conspicuously ugly Teatr Capitol, which back in the day was where the Society of Polish-Soviet Friendship was domiciled – look carefully by the entrance for a mosaic / mural featuring one of the few hammer and sickles to survive the iconoclasm of the ’89 transformation. Nearby, Teresa Brzóskiewicz’s white, wavy monument symbolizes the Wisła and the Volga, and the matey connection between PL and what was Soviet Russia. Unveiled in 1985, today it’s greatly appreciated by the skateboarders who’ve turned the landmark into their unofficial stunt park.

The North
Back to the other end you go, and across Solidarności. Positioned by Kino Muranów, the mint colored fountain is another element that’s been restored of late. Featuring detailing by Leandro Marconi, it’s led a merry-go-round existence. First erected in 1866 on Krakowskie Przedmieście, it made way for the Mickiewicz statue in 1897, only to pop-up again in the center of Pl. Bankowy in 1910. It survived the war, but didn’t fit into the redevelopment plans made for the plac, and was thus shifted again to its current location. Complete your route by dipping through the underpass and emerging by the junk food pavilion on the other side.
Constructed in 1967, where KFC now resides was once home to the Gruba Kaśka snack bar. When it was first opened, it was lauded as a social focal point. “The bar serves hot meals and beer,” gushed the press at the time, “and most people visit to eat baked beans in tomato sauce.” Arguably, it’s gone backwards ever since…