When Brooklyn Restaurant opened in spring of last year it was to a curious blueprint: burgers on the ground floor and then, downstairs, a more upmarket menu authored by Chef Jan Piecuch. And while his food was good, you got the sense it never really took off – after all, who in their right mind would traipse down for a posh tasting menu via a burger bar? Exactly. Anyhow, the owners of Brooklyn have moved fast to correct the missteps by realigning the downstairs restaurant closer to its American food roots. The results are quite something… 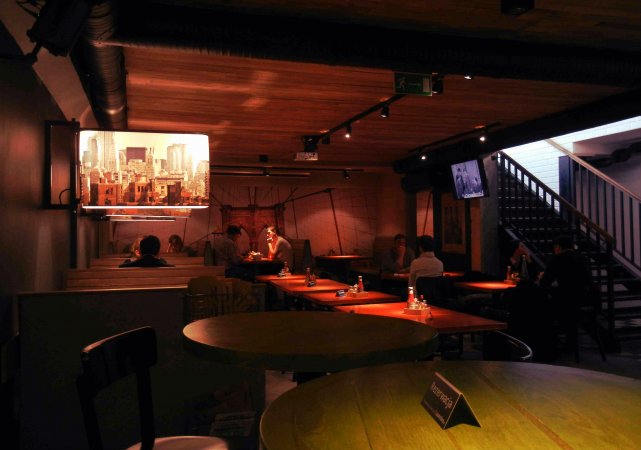 The Place: hasn’t changed. Downstairs is all checkered, chessboard floors, dim lighting and giant wall prints of Brooklyn Bridge. It looks and feels American without ever touching kitsch.

The Menu: gone are the fancy pants culinary creations, switched out in favor of pimped-up soul and street foods, salads and steaks – back to basics. But you know it’ll be something special when you learn it’s been cobbled together by Michael ‘Solly’ Sollinger, an expat stalwart whose principle claim to local fame lies in co-founding the Warsaw Tortilla Factory back in the 90s. 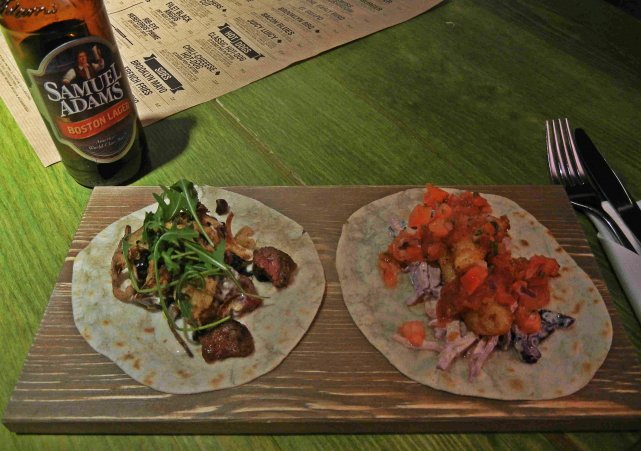 Starters: undecided between the ‘Ninja Shrimps’ and ‘Cheesy Potato Bastards’ (potato/bacon puree with cheddar cheese inside a tortilla), I end up opting for ‘Solli’s Soul Tacos’. They arrive as a pair, one featuring hangar steak with balsamic onion jam, and the other with beer battered tilapia on creamy chipotle coleslaw. The flavors are crisp, fresh and zingy, and are a great example of just what happens when modern Mex meets artisan America.

Mains: the waiter does his best to sway me into choosing Mito’s Beef Ribs (“cooked for 24hrs, they literally fall off the bone”), but I’m set on another house specialty: hot dogs. I mean, come on, this is the ultimate in comfort food, this is food designed to detonate Saturday afternoon hangovers into a million separate atoms. But the main plus with Brooklyn’s dogs? You’re not eating pig eyelids swept up from the slaughterhouse floor, but 100% beef dogs. 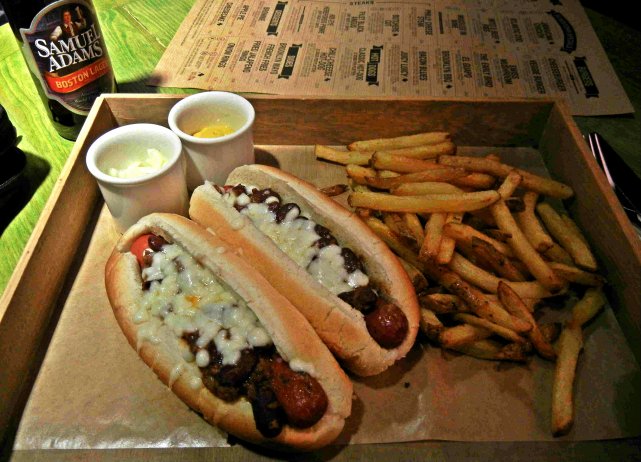 Dessert: they’re justifiably proud of their cheesecake. In fact, at differing intervals I’m asked by the chef and two wait staff what I think of it. Each time my reply is the same: perfect. Smooth, dense and with a nice slick of raspberry puree, it’s faultless in every respect.

The Drinks: eventually the plan is to install seven or so taps serving Polish craft beer. In the meantime, find a few cult beers by the bottle, among them the celebrated Sam Adams.

The Service: informal and chatty, like the venue warrants. The sudden success of their rebranded menu means wait times can be a little drawn-out, and I found the chef warning me of this before I even ordered: “we’re not so much short-handed this afternoon as we are no-handed, sorry!” No worries. As long as a place is transparent with its customers from the off, I’ve no problem with that – some things, after all, are worth the wait. 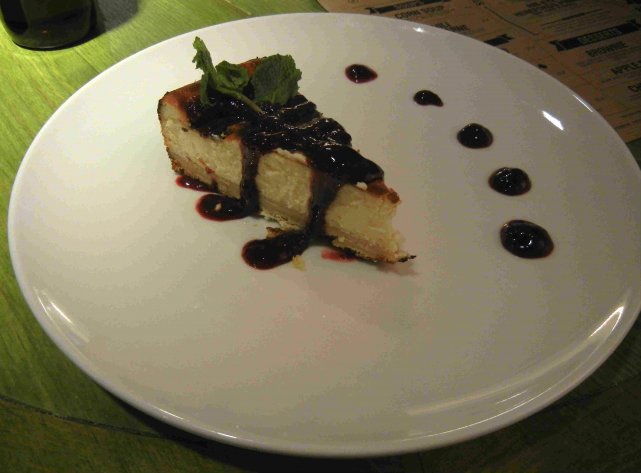 The Price: is in your favor. Starters balance out at around 20 zł, burgers and dogs in the low-to-mid 20’s, and steaks from 50 odd (rib eye Hereford dry aged for 31 days maxes at 59zł).

The Verdict: when they first opened, Brooklyn’s downstairs restaurant provided exactly what Warsaw didn’t need more of. They’ve now reversed out of that dead end and found a road that does need exploring: proper American food that goes far beyond the formulaic offerings of others. Consider that extremely good news for Warsaw!