Chef Aleksander Baron talks about his attempts to rehabilitate the reputation of Poland’s official Christmas fish: the carp… 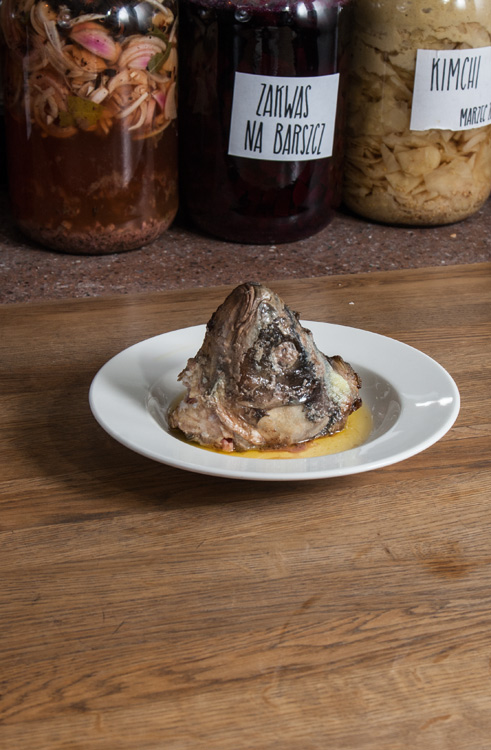 • Carp has a few PR issues. Firstly, it’s got bones… lots and lots of bones. If you asked me a chef’s secret tip, I’d tell you in heartbeat: get someone else to debone it! The second problem carp has is its taste. Most people buy carp that’s been farmed and fed with corn, and that corn taste will always come through. On top of that, carp is associated with mud, slime and ooze, and again that can carry through to the final taste. Actually, that’s why in the PRL days you’d find Poles keeping their carp in the bathtub: to filter out the mud.

• The most remarkable carp I’ve ever had was in the Canton province in China. I was served carp heads that were soft and delicate yet at the same time spicy – a brilliant contrast. As for my first memory of the fish, that’s probably from when I was about five or six years old. It was right at the start of my family’s Christmas Eve celebrations and I got a carp bone stuck down my throat. I didn’t tell my parents because I was worried they’d take me to hospital, but at the same time I couldn’t eat a thing – imagine that, I’d been looking forward to Christmas Eve for ages and then I couldn’t eat! I remember sitting at the table stressing, wondering if I’d even survive!

• From my family, it’s only my mother and myself that eat the heads – we love them. I also like the texture of the cheeks, as well as that bit between the head and the gills: it’s almost like jelly. It’s not my intention to cook foods that some people think are strange, I just simply want to cook everything – if an animal has been killed for me then I think it’s only right to use every last bit of it.

• Some of my carp menu was influenced by Polish Baroque cuisine. That was actually more in line with Indian food than anything else, with lots of spices like cinnamon, ginger, cardamom, etc. In part, Poles of that era liked cooking with those ingredients to demonstrate their wealth, though hiding the taste of bad meat was also a consideration. My carp bigos involves a lot of these things: orange zest, ginger, turmeric, raisins, a touch of honey. I see it as a modern interpretation of a historic dish. Other parts of my tasting menu – for instance the soft roe – were completely my idea. I never saw this menu as being a risk. The beaver menu we had in October was a huge success, and I feel I’m at this beautiful stage of my life where my ideas are working, or at least 90% of them are. Recently, it feels like everything is coming together like magic!

• For me carp is one of the best fishes around: the meat, the fat, just brilliant. But you have to get the proper stuff. But where can you find good carp at Christmas? Honestly, that’s a really hard question as you won’t know what you’ll like until you actually try it …

•Like everything, the worst thing you can do to a carp is overcook it. In terms of home cooking, the biggest mistake people make is frying the fish with oil. You have to use butter, clarified butter or maybe even animal fat – but never, ever oil. Importantly, I always say that to cook carp correctly you need to love it. If you don’t love what you’re cooking then it’ll never taste good.

For the duration of December, Aleksander will be offering a four-course tasting menu based around carp for zł. 120 at his restaurant, Solec 44. For details, see: solec.waw.pl