It is no more a crumbling wreck – the micro district comprising Wilcza, Poznańska and Hoża has emerged as Warsaw’s most upcoming area. We take a walk through its stories and past… 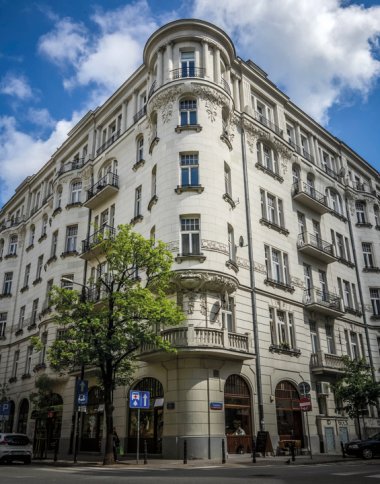 There are many reasons to love this area, but its architecture is key. Would it have become the social hub it is were it just a sea of socialist grey? Evoking an almost Parisian spirit, the masterful mix of fin-de-siecle and belle époque weaves a powerful spell. With its paladin windows and ornate touches, Hoża 41 casts a glow across the crossroads. Equal in beauty there is Wilcza 58A a potted history of which includes one of Poland’s first underground garages, and a short stint as a local base for the Soviet NKVD. But the area is not just about sumptuous apartments with fancy reliefs. Take Wilcza 71, a functionalist classic designed by Józef Steinberg. Pockmarked with bullet wounds on the outside, it’s worth the effort trying to sidle your way in. All kinds of curious little details from the 1930s survive, among them a white marble stairwell with a central glass shaft. And while you’d be forgiven thinking this was a residential quarter of town, that’s not the case. Hoża 51, for example, is one of the best preserved instances of pre-war industrial architecture to be found in the capital. Dating from 1896 it has during its time housed a vodka distillery, the Samuel Orgelbrand & Sons printing house, a Russian field hospital, a dairy and the Patria cigarette factory. 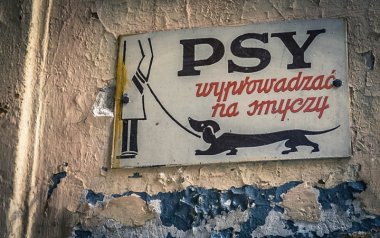 Attached to some plush new build, there is something incongruous about the derelict structure at Poznańska 21. Set on three floors, this boarded up hulk is actually regarded to be the oldest surviving building in downtown Warsaw. Completed in 1879, it’s currently close to collapse and its future caught in a tangle of red tape. Calls for it to be saved and entered on the heritage list have gone unanswered because of bureaucratic issues: 26 people are cited as holding rights to No. 21, and until all agree on saving it City Hall is powerless to intervene. Ridiculous as it sounds, but it’s become increasingly likely that a piece of Warsaw history will be allowed to cave in.

Visit Hoża 53 to find one of two ‘Windows of Life’ found in Warsaw. Opened in 2008, two years after they first made their controversial debut in Kraków, this church-led initiative enables mothers to anonymously leave unwanted babies inside an incubator before an ambulance is called to ensure the safety of the infant. There’s something ghoulish about staring behind the sliding glass window, and my discomfort increases when the photographer suddenly shrieks, “Oh my God, there’s something in there.” As it transpires, it’s a trick of the eye.

The contrasts and contradictions of modern Warsaw are hard to ignore at Wilcza 30. With regeneration and gentrification rampant, No. 30 stands stubbornly in defiance. Home to the Syrena community, the entire building has been seized by squatters. Their banners and murals adorn the exterior, while inside graffiti-covered walls line the stairwell and landings, each with its own message of anarchical hope: “No Gods, No Masters,” reads one, “Reclaim the Streets,” declares another. Attacked by nationalists during last year’s Independence Day riots, the occupants have grown wary of outsiders. Where once Joe Public could swan in and out, nowadays the gate is usually locked. Nonetheless, look for announcements for workshops that are occasionally pinned to the entrance (or their website: syrena.tk), for a compelling glimpse at a secret side of Warsaw.

Wilcza 32 might tout a refurbished entrance, but they’re not fooling anyone. Walk beyond it and one discovers a piece of Warsaw frozen in time. Amid the smells of rot and damp, find directives preserved from communism attached to the peeling plaster walls: “Dogs Must Have a Lead,” “Quiet Hours From 10 p.m. to 6 a.m.,” and “Parents Will Be Held Responsible for Damage Caused by Children.” Twinned with illustrations (a slinky sausage dog, a smashed window and a snoozing Mr. Moon) and cool commie-era typography, there’s a sensation of stepping back in time. Cast in shadow, the courtyard looks ragged and shabby yet almost romantic – you imagine a foggy scene from a film noir being shot here. Then, in the corner, stands a well-tended courtyard shrine embellished with flowers and greenery. It’s not recorded when this kapliczka was created, though by in large most date from WWII: a time when courtyards were regarded as safer places of worship than churches. Seen as a “public affirmation of faith,” they brought with them a sense of “security, solidarity and even freedom.” 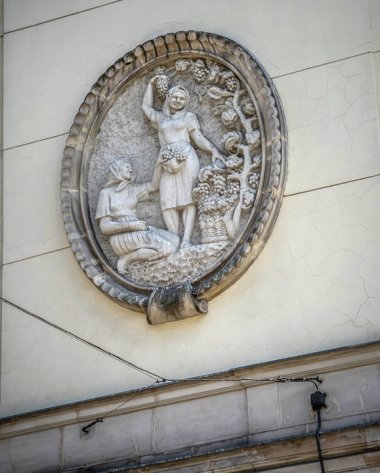 A quarter of a century after the Iron Curtain was swept aside the heavy hand of communism continues to infringe on daily life by way of its bombastic, statement architecture. The Palace of Culture aside, nowhere is this more obvious in the center than at pl. Konstytucji. Forming part of the larger MDM district (scorned at the time by one critic as appearing like “a stone wedding cake covered with balconies built of boulders”), the development stretches all the way down to the Wilcza / Marszałkowska intersection. Seen as a flagship residential project, this post-war Stalinist estate didn’t miss a chance to promote Utopian ideals. On one side of Wilcza, look up to see an elaborate relief depicting peasant women picking grapes. The work of Sopot artist Hanna Żuławska, her other contribution to this ‘propaganda district’ can be found across Marszałkowska: an intricate mosaic set under a giant clock face built in Sopot and transported piece-by-piece to Warsaw.

There are more Age of Stalin glories elsewhere. Krucza was rebuilt in its entirety following the war – once a narrow street of tight tenements, it was reinvented as a wide boulevard flanked on either side by giant, faceless blocks. Crossing Hoża / Krucza and one can’t fail but notice the Mercure Grand Hotel. Originally the Grand, it was designed in the 50s to host Polish delegations visiting the nearby governmental ministries. Its interior of “space-age chairs and kidney-shaped tables” was radical at the time, though it was the 11 th floor Café Olimp that everyone aspired to visit. Author Jerzy S. Majewski notes: “after the era of gloomy Socialist Realism, a great bright world existed [here]. There was music, colored lights hung from the ceiling, the walls seemed to undulate, and through the huge windows one could admire a panorama of Warsaw.”

To the other side of this area, as Hoża approaches Chałubinskiego, one can see a more whimsical interpretation of the Socialist Realist style. It is here, after all, one can find the Ministry of Infrastructure. Completed in 1950 to a design by Bohdan Pniewski, it’s notable for a bizarre rotunda supported by narrow columns, and an overhead passageway that links it to the building across the road.

Further on, walk up Chałubinskiego, and then make a turn to head back onto Wilcza. In the distance you’ll see the University of Chemical Technology, its drab walls given some needed extra cheer by the painted outline of a dove. Added during the Cold War, it’s been interpreted as an official snipe at the west for its war mongering, and a declaration by the system of its peace loving ways. Of course, some would question that thinking, among them Lech Wałesa – the figurehead of the Solidarity movement that helped crack communism. When Martial Law was declared in 1981, he was allegedly held captive in the police cells at Wilcza 21 before being whisked under house arrest to a then secret government retreat in the south east of Poland – lucky guy, for it is known that his new lodgings in Arłamów included a harem of Cuban ladies guarded by a eunuch. 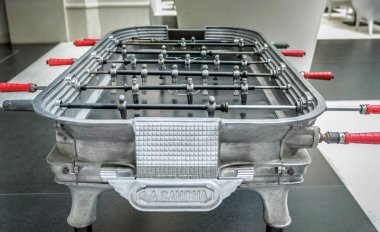 While its principal entrance faces Jerozolimskie, as you reach the end of Poznańska there’s no ignoring the Polonia Palace Hotel. Opened in 1913, its elegant form conjures images of Gatsby-style parties and inter-bellum excess. Under German occupation it was renamed Der Reichshof and served as a hotel for high-ranking personnel. It was a factor that saved it from destruction while much of the rest of the city was systematically destroyed. As one of the few surviving buildings of status, it hosted both Eisenhower and De Gaulle when they visited the city in 1945. Embassies flocked here as well, with over 20 operating from the rooms – among them the Brits and the Americans – making it something of a center of double dealing and espionage. Reopened in 2004 after a major restoration, it had the honor of looking after the Miss World contestants when they clip clopped into Warsaw in 2006.

Touting a similarly exotic history, H15 Boutique up the road has long been associated with a harmless bit of plotting. As early as 1897 – when it was first finished – clandestine meetings were held by patriotic youth movements planning Polish independence. In 1924 the structure was purchased by the Soviet Union and transformed into an embassy. Soviet reliefs still abound, with the most conspicuous appearing above the main entry. While the building was commandeered by the Nazis, they opted to keep these Soviet leftovers as a trophy of sorts. Since launching in 2012, the hotel has amassed other trophies: original snaps of Marilyn Monroe taken by celebrity photographer Milton Greene, not to mention a 110-year-old Argentinean fussball table. 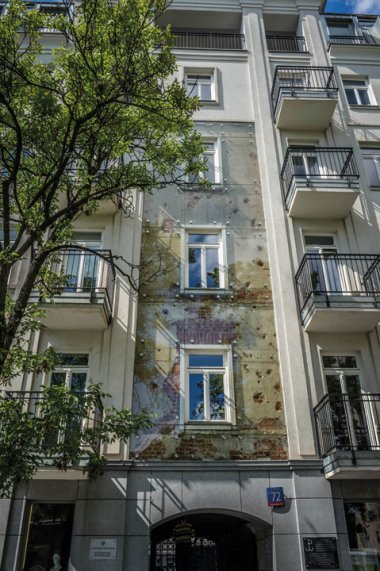 It’s impossible to ignore the Warsaw Uprising in any tour of town, and this part of Warsaw is certainly no different. Tablets commemorating street executions and insurgent actions are numerous and stretch from one end of the street to the other. Take Wilcza, for example. A meter from where it begins, on Al. Ujazdowskie, find a plexiglass info board that determines that the sewers below were used by combatants during the 1944 battle. Wilcza 2/4, meanwhile, is reputed to be haunted by a sad German officer whose said to be benign in spirit.

Then there is Wilcza 22, known by the snappy title of Dom Sprawdzony Nie Ma Min. This is a nod to the ‘Cleared – No Mines’ notice that was painted onto the courtyard tunnel during the post-war cleanup process. With No. 22 now a posh, gated apartment block, there’s no telling if the sign has survived – any residents, then please let us know. Beyond, and a more publicly accessible sight can be found at Wilcza 72. Also revamped as luxury condos, the difference here is that a part of the bullet riddled façade has been preserved behind glass. Looking at the war scars, it doesn’t take much imagination to recognize the ferocity of the fighting. Find the University of Warsaw’s Faculty of Physics sneaked away on Hoża 69. Established here after WWI, it is said that through the 1930s 15% of the world’s most important Physics papers were coming out of Hoża. Its standing in terms of global importance cannot be called into question. In the 50s local physicist Leopold Infeld co-authored a number of studies with Einstein, while more recently, a new type of radioactivity was discovered here in 2002. Close by, the Institute of Zoology can be found on Wilcza 64, and in it a little known museum of Zoology. Not all study, however, means burying yourself in books. Created in 1927, Warsaw’s oldest dance school is found at Wilcza 19.