You’ll find Dekant in that small slice of Powiśle that’s all Bentleys, Beamers and glitzy new condos. To get an idea of the clientele, you need know no more other than this was pretty much the first place Robert Lewandowski was spotted after returning from the Euros. So, the day I’m scheduled to visit I’ve made sure to look like I’ve emerged from a swamp. Caught out by a flash thunder storm, by the time I squelch in I look like I’ve had a bucket of water tipped over my head. To their credit, the staff don’t even flinch.

My mood is sour and snarly but, with the waiter brandishing a bottle of Rioja, it’s hard to maintain the stony-faced veneer. This guy knows what I want. Branded with the Dekant logo, the Vina Alberdi Reserva 2009 is a well-structured wine rated ‘outstanding’ by Robert Parker’s Wine Advocate. I might not look it, but inside I feel human again. 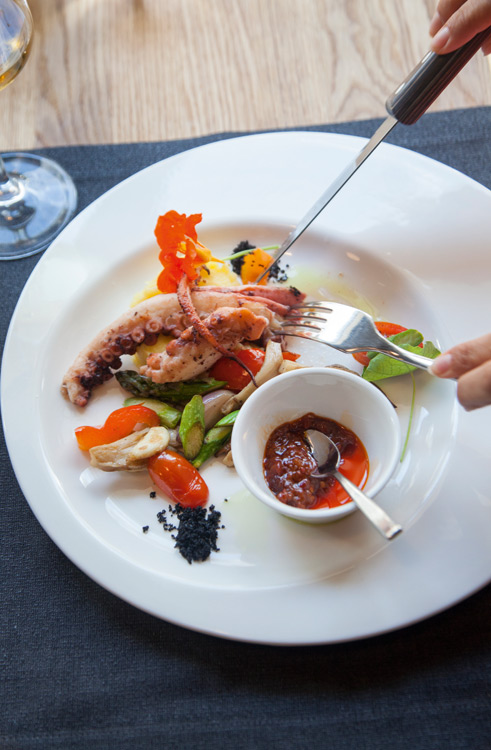 Dekant, clearly, is a wine bar first and foremost. The list comprises over 300 wines from both the most prestigious producers in the world, right the way down to tiny, little vineyards you’ve probably never heard of. That Wine Spectator magazine were raving about Dekant before it even opened illustrates the regard that the owner, Daniel Wasilewski, is held in wine circles. But that there is all I’ll say about the wine. I’m a pub man, and I shan’t pretend otherwise. If you want to read about wine, look yonder to other sources. I’m here for the food, and admittedly am a little bit nervous. Warsaw has a few genuinely good wine bars, but I can think of only a couple that get the menu right. When it comes to culinary considerations, there’s a lot of mediocrity out there that doesn’t go much beyond competent home cooking.

In spite of my misgivings, apprehension turns to joy once the starters are sent out. This means tiger prawns in a mango chutney /coriander sauce for my glamorous accomplice, and tuna tartar for myself. Hers first: now, I have a very dirty little secret that I keep locked like a skeleton in the cupboard – I don’t like prawns nor the prawnographic pleasure that many derive from them. Instead, I limit myself to a dip of the sauce – it’s smooth and silky and with high pops of flavor. Later, I’m told this is the best-seller, so clearly, disregard my words and see why yourself. Tuna tartar, however, I can eat all day. This one is as it should be, light and fresh, though served with the added KA-BOOM of a nose-clearing wasabi. Delicious is the weakest adjective in the book, but that’s what this is. 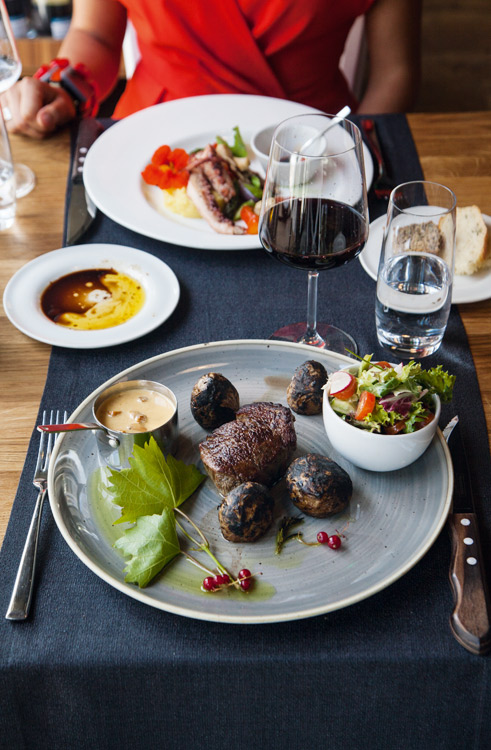 Onto mains, and for her, more seafood: grilled octopus with mushroom ragout and saffron puree. Forget the runtish-looking things served in some restaurants, this is the kind of sea monster you’d see in Pirates of the Caribbean. As thick as a rope, it strikes the perfect balance between soft and chewy. For myself, there’s filet mignon, which at zł. 79 is by far the most expensive item on the menu. To add a little perspective, that’s pretty much what you pay for a ‘standard’ experience somewhere like Der Elefant. This, though, is far from standard, it’s extraordinary. The surprise mind is the potatoes, cooked in ash giving the kind of char I’d cover miles to eat.

On the dessert front, my opposite number picks a chocolate soufflé with goat’s cheese ice cream, an adult-sounding dish with the perfect molten center. There’s just no way I’m letting anyone near mine though, a passion fruit semi-freddo with strawberries marinated in Grand Marnier. A cooling, decadent delight, it’s a triumphant final flourish that provides ample proof that Dekant is far more than merely a wine bar. And that alone is something to take note of: already causing a stir amongst foodies of Warsaw, expect their name to grow even bigger. (AW)