Don’t Be Scared of the Dark – Silesia Part 1

Saturday morning, beginning of April. For the last two weeks Poland has been bathed in the exquisite colors of an early spring. Today though, it’s a slate grey sky accompanied by drizzle. But it’s appropriate: is there a better way to view Książ Castle than as it emerges from a damp film of mist? With the zamek perched on a craggy rock amid thick, sinister woodland the weather feels apt.

Getting here has not been easy. It has involved a torturous train to Wrocław and a glum overnight stay to break up the journey. A great city is Wrocław, but our mood is unsettled, contaminated by a hangover and a spartan hotel. “If that’s the Best Western,” grumbles the photographer, “I’d hate to see the Worst Western.” Rising early we train it to Wałbrzych and then it’s a cab trip to Książ. Spirits lift immediately.

The first sight of the castle is a breathtaking moment. Only two in the country beat it for size – Malbork and Wawel – but its far flung location make it far better than those. Not here multinational babble, and not here packs of juvenile delinquents running amok. There’s a scattering of tourists but that’s about it – this is, by the admission of a local guidebook, ‘terra incognita’.

Our hotel, the Przy Oślej Bramie, is one of three found in the castle complex. It’s chaste in comfort but exudes a charm that’s ramshackle and rickety and suited to the setting. We are both pleased. Having glugged back the time-honored ‘we made it this far’ lager, we set off to explore what it is that’s around us. And how beautiful it is. Originally built in 1298 by Bolko I, the castle as we see it took its current form in the 16th century. But embellishments have seen it assume an eccentric skin of patchy complexion: there are elements of Gothic, Baroque, Rococo and Neo-Classical. Each and every angle presents a different form.

Even without this, taken on their own the castle’s gardens are enchanting enough. Layered over different levels, our only company are the cats that prowl among the hedgerows. Warsaw, with its bustle and buzz and dastardly deadlines feels a million miles away. It feels like we’ve fallen off the edge of Poland. 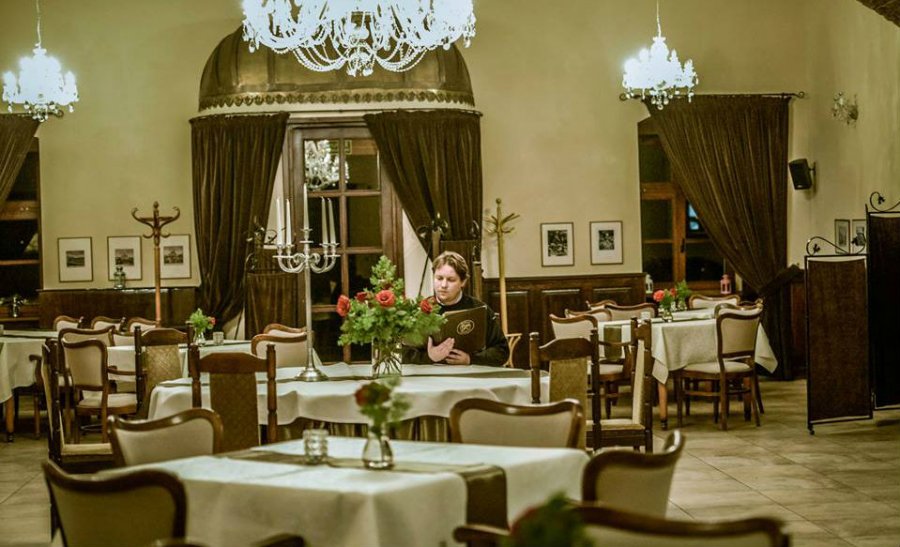 It’s a sensation that prevails as we plot up for dinner. We visit the restaurant of a rival hotel – by now the few tourists have dispersed and we eat alone inside a vast dining room that’s all immaculate linen and glinting chandeliers. It’s as if we have taken the role of Jack Nicholson in The Shining – even the music sounds the same. In between courses we break for a cigarette on the terrace and are spooked by the solitude and stillness. Soon, we will be spooked even more…

To some, Książ Castle is known as ‘the Pearl of Silesia’. To others, it is known as a paranormal hotspot. Tonight we will learn what that’s all about as we take one of their nocturnal tours. We have been instructed to meet our guide, Małgorzata, at the castle’s entrance, and as we approach – a crescent moon above – our jumpy giggles betray our trepidation. Prior to this moment we had assumed that this tour would be banal and overblown but as we clomp up the gravel path the atmosphere overtakes logic.

Małgorzata is already waiting for us, accoutered with lantern and cape, and as she leads us up the stairs we feel oddly unnerved. Walking through the darkened corridors, you sense the eyes of portraits following you; the wind is whistling and the windows rattle. Then, in the distance, we hear a wail – a long, pained, almost inhuman sound. We know these are contrived sound effects but they throw us off balance. The hairs on my neck are rigid. 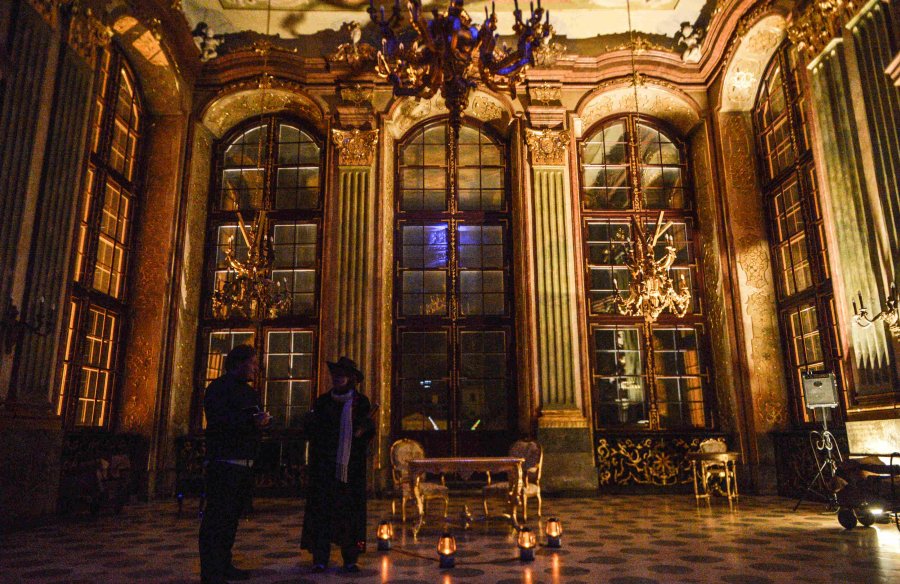 Małgorzata’s tour is story telling at its finest. Standing in a candle-lit reception hall, all gilt and gold, the history of the castle comes alive. Kaiser’s Wilhelm I and II were once entertained here, as was Winston Churchill who was a relation of the last resident, an English aristocrat known as Daisy. Regarded as one of the most beautiful women in Europe, the disappearance of her six meter pearl necklace is one of the enduring legends of this creepy zamek.

And legends this castle has in abundance. As we are guided through ancient cellars and derelict pantries, restored salons and secret passages we are regaled with tales of hauntings most wicked – a possessed jester, executed thieves and unhappy aristocrats. All the while, Małgorzata is supported by a cast of actors: a little girl with a balloon glides from the shadows; there is the face of a princess in the window; a knight wielding a fiery sword; and not least Daisy herself – searching it is said, for her necklace. It’s done with such onvincing unpredictability we jump out of our skins, Scoobie Doo-style, more than a couple of times.

If the actors think we’re berks, then their suspicions are correct. With the tour finished we’re all beery bravado. “I’d give that Daisy a pearl necklace,” I leer, and there’s plenty of innuendo as we unwind in the bar. Only later do we notice the now off-duty actors are sitting in earshot in a corner of the room. But the quality of the tour should not be in doubt. As we convene over breakfast the next day, it’s with heavy bags under the eyes. “Didn’t sleep a wink,” says the photographer. Sheepishly, I confess I’d kept the light on. 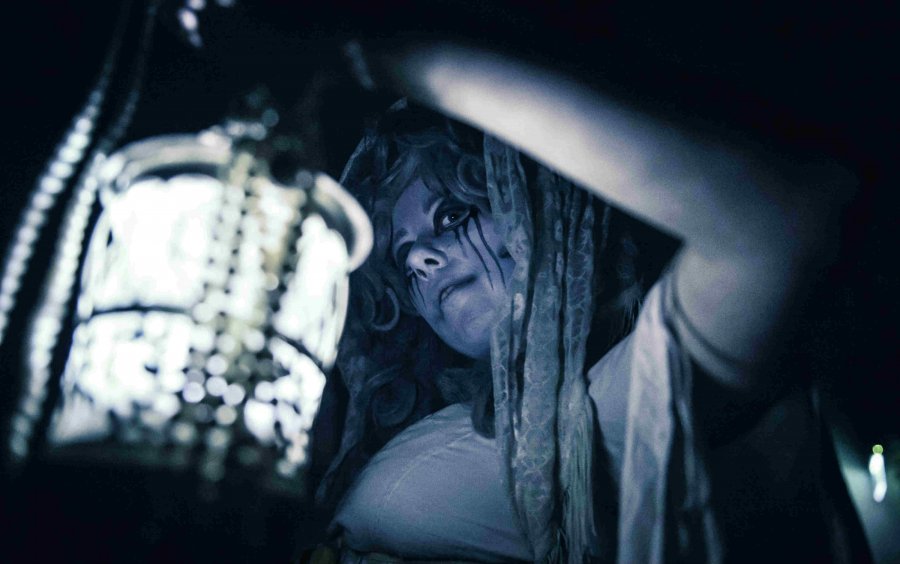 Historical evidence suggests Hitler had earmarked Książ as his Silesian HQ, and while he never visited his Luftwaffe adjutant, Nicolaus von Below did – twice, apparently to oversee the castle’s conversion into Hitler’s quarters. But whilst last night’s tour had culminated in a tunnel carved by the Nazis under the castle, its planned use remains unknown. That though, only forms part of a much larger mystery. From 1943 on it is estimated 30,000 people – many of them slave laborers – were set to work on the construction of tunnels in the surrounding Sowa Mountains as part of something titled Project Riese (Giant).

Here, the plot thickens. From the limited sources available, historians have determined that only about a third of these underworld complexes have yet been uncovered. It seems likely some were to be used by Nazi high command, while others were slated for use as laboratories specializing in the production of chemical, biological and possibly nuclear weapons. But the secrets of the Sowa Mountains extend beyond that: with the war dragging to its conclusion, locals speak of mysterious trains arriving in the dead of night never to be seen again. What was on board these? Speculation has included everything from bullion trains to art treasures, even The Amber Room. Seven complexes have so far been discovered, and three are open to the public. Waking up bleary eyed, the Insider was not going to let the chance to explore these slide…