A few weeks ago I sang eulogies about Jedna Trzecie, a beautiful Belgian beer bar that didn’t so much add swagger to my step as it did a stagger. Great place, even better beer. Anyhow, they’ve now gone the extra yard and added a restaurant to their portfolio by the name of Dwie Trzecie (another venue will soon complete this triumvirate, so I’m told). Open for about two weeks, it’s already gained positive reviews from the likes of the owner of my local bar (hi Cześć!) to the secret diner at Froblog. And yes, their praise is justified.

Location: cursed, say some! In my time in Warsaw this address has housed an Italian, a Greek, a bar and an Indian – and God knows what may have come before. All met the same grisly end, their dream destroyed by a malignant combo of steep rents and bugger all custom. Dwie Trzecie, however, have a better chance than most – first, it’s good. Second, it’s opened at a time when Wilcza / Poznańska has become the social equivalent of Mayfair on the Monopoly board.

Design: thoughtful. You get the idea that Dwie Trzecie will work in all seasons, not just the one – it’s raw enough for summer, yet also warm for winter. In a city still largely fixed on ascetic aesthetics this is good news indeed. Featuring an L-shaped floor plan, the interior is composed of exposed brickwork, comfortable chairs, discreet lighting and the correct amount of space in between tables. Modern doesn’t have to mean sterile – and here’s the proof. 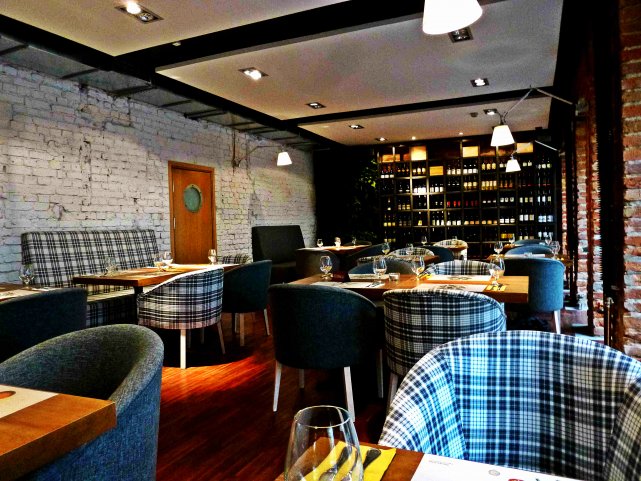 The Chef: Marcin Jabłoński is the head honcho in the kitchen, and his CV includes competing in the Bocuse D’Or as Poland’s representative. According to his PR blurb, he’s also cooked for Nicolas Sarkozy and 50 Cent. He can now add my name to that list.

The Menu: is Polish only – if they do have an English version, none was forthcoming. Annoyingly, it’s one of those places that keep it brief: rabbit / asparagus / potato fondant / peas. I know that’s a bit of a fad, but I’m already bored of it – I prefer my menu to give a more rounded description of what I’m getting. You know, something about the provenance of the ingredients, some extra info. I don’t want a cryptic card full of waffle, but a bit more detail doesn’t go amiss.

The Food: they claim it to be Mediterranean / Fusion (eww, not heard the F word for years), though personally I’d label it more author’s cuisine. With a few exceptions aside, it certainly feels original enough to merit such title.

The Staff: lots of positives, some small negatives. Negatives first: I am utterly foxed as to what was served as the amuse bouche. Really, I have no idea, and while I could and should have asked, the ball is in the server’s court. Second, the bread came without a knife. This is a huge shame because the bread was the best I’ve had outside of Atelier Amaro – using a fork to apply the gorgeous herb butter just wasn’t the same. Again, I could have asked, but my English reserve kicked in.

Fortunately, that’s a small side note. Taken as a whole my waitress was fabulous and in the possession of a smile to kill and the perfect tableside manner. A tip well-earned. Also, it was great to see the manageress (at least I think it was), ducking in to clear my table when the waitress was busy with another table. It’s a small detail, but I’ve had enough of sitting in restaurants where the management just slouch at the bar staring emptily at a laptop. 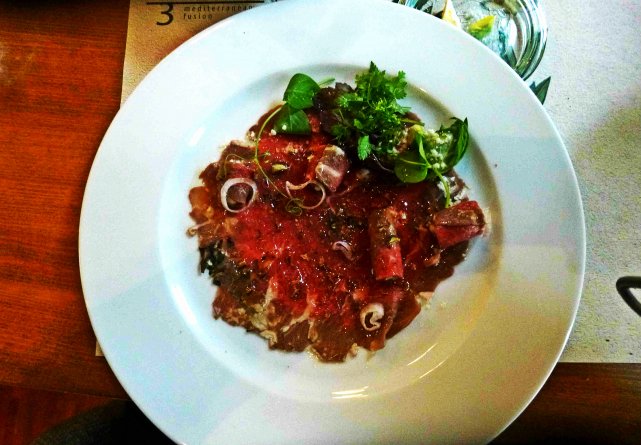 Starter: having already enjoyed the mysterious amuse bouche (good btw) and the fabulous bread I was already confident that this would be a top meal. So the starter was a bit of a letdown – beef carpaccio. Maybe it was too big, meaning I couldn’t really savor the tastes, or maybe it was the way it was served – with a blast of nitrogen. There’s a lot of originality in this kitchen, so to use techniques like this seems a few years behind. Even so, I did enjoy that Chef Marcin came out to do the honors. As a hopeless chef groupie it’s always nice to have some communication with the guy in charge.

Main: after the slight disappointment of the starter, the place hit its stride with my main: hanger steak. Alongside this tender cow is fresh asparagus, dainty white carrots cut like French fries, sweet peas and a flower here and there. I pondered over this dish, each silky mouthful better than the last. The slate was spotless by the time I’d finished. 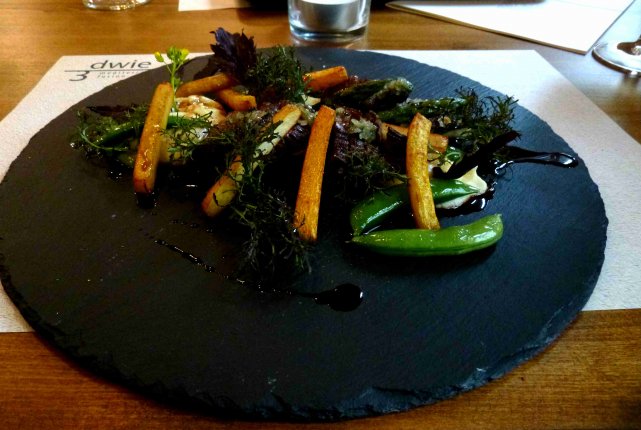 Dessert: only two choices – chocolate fondant or lemon tart. I opt for lemon tart and am served a delicate dish consisting of meringue, stevia and chopped and diced fruit. It’s light, fresh and a confident end to a good meal. No earthquakes, but a very happy ending. 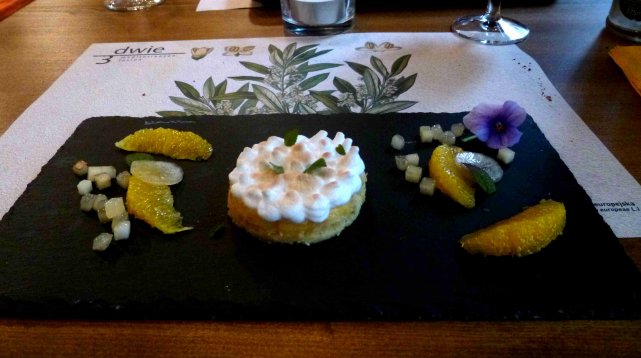 Drinks: I’m off alcohol for the time being, which is a right kick in the crackers – the cocktail list looks brief but creative while the beer is Grimbergen: brilliant, no more needs to be said. Sorry, I forgot to look at the wine list, though reading around it’s both reasonably priced and broad in choice. Soft drinks it was though, and that’s not a problem so long as they’ve got the Fentimans range in stock. Words can’t describe how I love this brand.

The Bill: three courses, glass of water and a bottle of Curiosity Cola – total: zł. 107. Bargain.

Bottom Line: I enjoyed this place tremendously. There’s definitely talent and skill at work in the kitchen, and while it’s hard to judge a restaurant on one visit alone, what I’ve seen I like. A lot. I can see myself returning not just occasionally, but with quite some frequency. In the 24hrs since my visit, I’ve already recommended it to everyone I’ve seen. Consider that recommendation extended.