Around the same time the rest of Warsaw was melting with heat exhaustion, I was scooting around town like a diligent little droid. Highlights of the week thus far? In completely random order, those are as follows…. 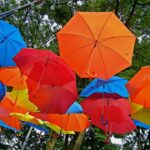 There aren’t many sexier suburbs than Saska in summer. Throughout the year I love its whole detachment from ordinary Warsaw, and that sense of being somewhere a little snooty, sophisticated and better than the rest. Fringed with inter-war architecture that’s straight out of Poirot, it’s always worth prowling the side streets; but let’s not kid ourselves, without Francuska the district is nothing. My favorite bit? Francuska 30, where a ceiling of umbrellas announce themselves in a cacophony of color. 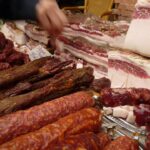 I love a good military bastion nearly as much as I love good food. So put the two together and you have a combo of note. Hidden inside a Tsarist-era stronghold, I’ve only recently been introduced to the magnificent Forteca Kręgliccy (Zakroczymska 12). Operating from dawn each Wednesday, this small-scale farmers’ market is a gem. With the emphasis firmly on quality, don’t be surprised to see some of Poland’s top chefs browsing about: on my visit, that meant Robert Trzópek. 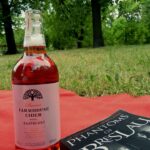 Sunday meant a dawn raid on the cider supplies in Marks & Spencer followed by some park chill out time with a bit of Marek Krajewski. To the uninitiated, Krajewski’s detective novels – set around inter-war Breslau – are a complete gore-fest of grisly murders and deviant behavior, with the author perfectly evoking the spirit of a decadent town thrashing to a backbeat of moral decay. And that’s a signed copy pictured! For more on the time when the Insider met Krajewski then have a click on here.