golf1 outdoor4 sport33 weekend132
The Insider enjoys the ultimate drive at Poland’s most championed golf course. You should feel free to say what you want about golf because,...

The Insider enjoys the ultimate drive at Poland’s most championed golf course.

You should feel free to say what you want about golf because, in all truth, the rest of the world already has. A google of the terms ‘golf’ and ‘quotes’ brings up a wealth of words, many of which center on the game’s capacity to exasperate. Mark Twain, for instance, called it a ‘good walk spoiled’. Another unidentified source went further, claiming ‘golf is a lot of walking, broken up by disappointment and bad arithmetic’.

Personally though, I disagree. But that’s because I’ve spent the last five hours on the course at First Warsaw Golf Club and barely broken into a stride. Instead, I’ve been haring around in a nifty, little buggy having the time of my life. Twain was wrong and I’ll happily testify against him.

Now although it’s commonly accepted that golf was born in Scotland, sometime around the 14th century, its history in Poland is a little less venerable. Warsaw’s original golf club opened in 1928, around what is now ul. Bartycka to the east of Łazienki, and while it was more-or-less prohibitive to the rank and file, it was embraced by the toffs. Famously, in 1935, Polish aristocrat Karol Radziwiłł triumphed over the Duke of York in a game exhaustively covered by the media. And then it all went wrong. 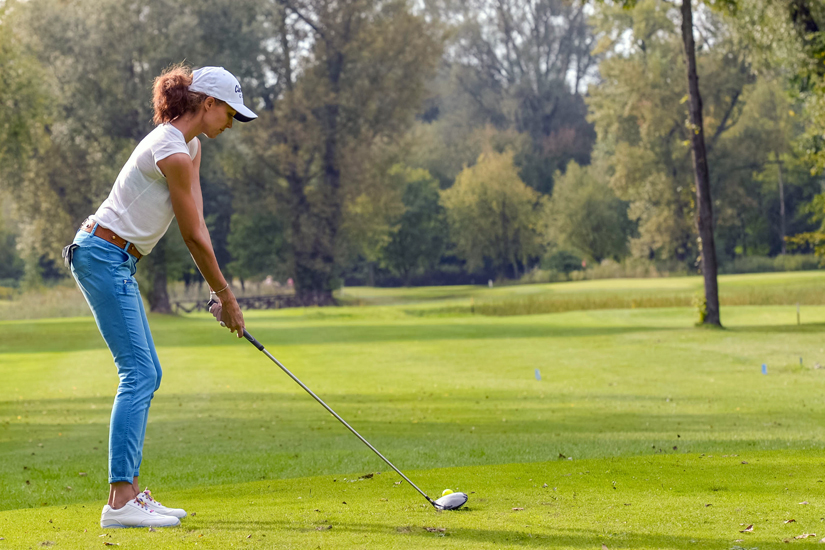 Just as golf was gaining popularity WWII broke out. With peace came communism, and the game was swiftly banned for its associations with the upper echelons of society. Poland would have to wait until 1992 for the opening of the First Warsaw Golf & Country Club, the nation’s first post-war golf course. Since then, FWGCC has been joined by approximately 25 other clubs sprinkled about the country, though it remains the most high profile in PL.

That said, talk to any golfer and they’ll say there was a time when FWGCC was more infamous than famous. Allowed to deteriorate by its previous owners, a nadir was reached when the clubhouse burned down a few years back. As it proved, this was a blessing in disguise and its ambitious new owner set about pouring his energy in reviving it from the dead. What started as a business plan became a project of passion.

As we arrive, down a twisting country road, the new clubhouse is certainly not what I expected. There was me thinking it’d be all Chesterfield sofas, wood paneling and pewter tankards hanging from the bar. Instead, it’s bright, light and full of buzz. But that can all wait till later – first, there is a game to play. Actually, there isn’t a game to play because when it comes to golf I don’t know an eagle from a birdie nor a bogey from a par. And isn’t a bunker something terrorists hide in? So instead, having blagged a pass for the day, I’m here to generally snoop about and understand the atmosphere, if not the strange complexities of this noble pursuit.

Doing so allows me to fulfill a childhood dream – to tear about in a golf cart, or a Melex as they’re known out here. With the photographer in the front, and our caddy for the day at the wheel, I’m left clinging on for dear life as we pelt it around the course. As it happens, today is the first day of the Ladies Masters and, spotting a photo opportunity, we hit top speed as we whistle after another buggy commandeered by attractive women. Our pursuit is fast and frenzied, and combines elements of Benny Hill and James Bond as we whizz over the course chasing our prey.

It’s brilliant, and both me and the photographer are left grinning ear to ear. “Tell the truth,” demands the photographer, “when everyone else is gone for the day, do you ever just race around here for a laugh?” The caddy looks puzzled and answers by smiling politely. Clearly, the golf here is a serious business, and one reflected by a revamped course that’s amongst the best in Central Eastern Europe.

Covering 20,000 sq/m, it’s also quite a beauty. Set amongst undulating landscape and 150-year old oaks, one feels totally disconnected from Warsaw’s thump and thunder. The air is clear, the sky is big and the silence pure – there is no sound bar the occasional ball being thwacked by a distant five iron. Marvelous.

As we conclude our drive, we do so at the recently completed 18th hole, an island that has raised the course to Par 72 and got golfers around the country rushing to check it out. Looking at it, even a non-golfer can understand why. Retiring to the clubhouse, we take stock of the afternoon on the terrace, and it’s the next couple of hours that come to define our day. I can take or leave the golf aspect but it’s here, sat on the wooden lakeside deck, that one realizes what it’s all about. 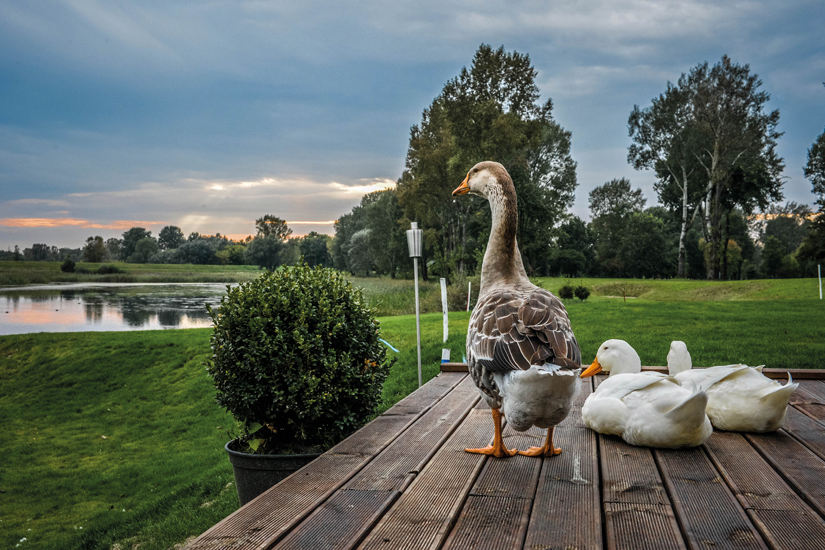 Amongst all the diamond patterned jumpers, clashing colored clothing and Lacoste sun visors there is an atmosphere like no other: one of comfortable contentment and discreet prosperity. Over a magical meal and ice cold Pilsner’s we sit and watch the sun set over the lush green fairways and glinting water. Swans glide languidly in front of us and, at one stage, we are joined for dinner by a group of quacking ducks and a curious goose. With the sky blushing scarlet we sit back cocooned in a high state of bliss. I don’t ever want this day to end. For all I care Warsaw, 25 kilometers away, could be on another planet. It’s that escapism, I conclude, that golf is all about.