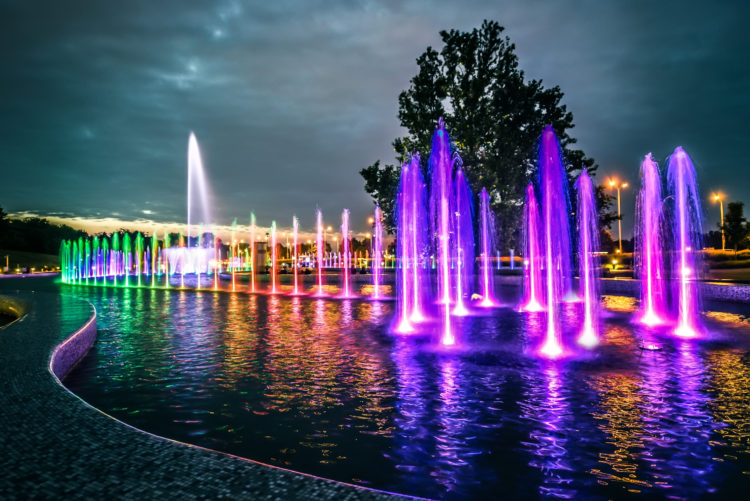 The Unmissable!
Now reactivated after the annual winter break, the Multimedia Fountain Park between the Old Town and river has thrilled millions since launching seven years ago. Equipped with 367 jets capable of firing 30,000 liters of water per minute, the carefully choreographed displays are paired with synchronized audio and visual displays to stunning effect. 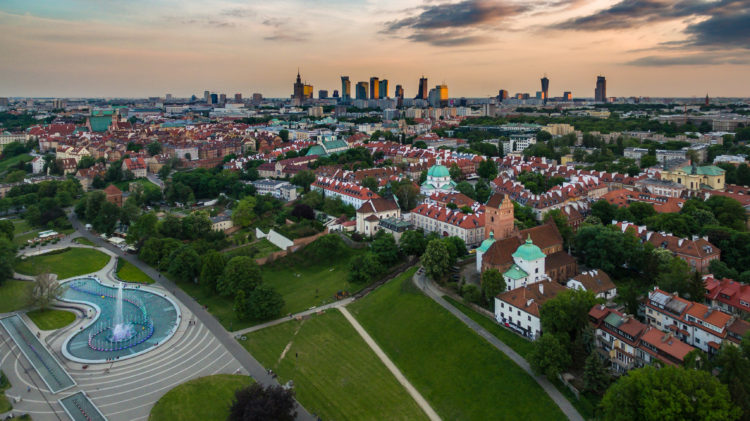 This year, organizers have opted to tell ‘the touching love story of Prince Bear,’ with over 35,000 people attending the official inauguration of ‘fountain season’ at the start of May. If you missed it, then you’ll be able to catch the extravaganza every Friday and Saturday at 9 p.m.

You couldn’t miss the Palace of Culture if you tried: a domineering, phallic reminder of Stalinism, it remains Poland’s tallest building to this current day. 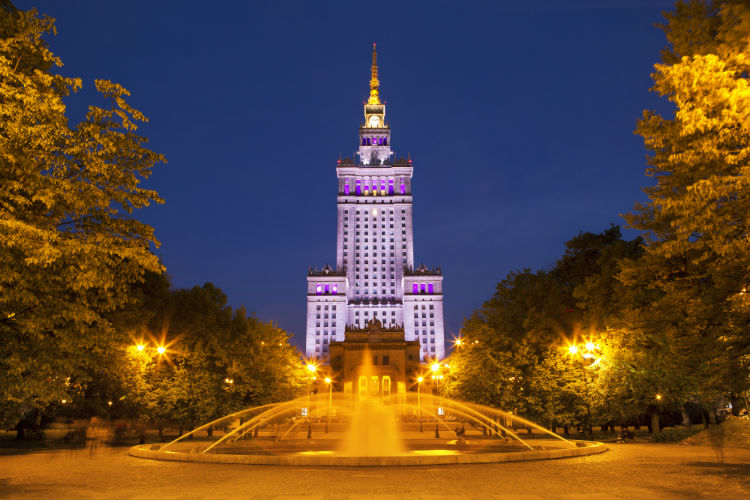 Its disproportionate dimensions are at their most acute at the base of the fountain in the largely under visited Park Świętokrzyski. Rarely does an inner-city sanctuary feel so dehumanizing and over-bearing.

The Mermaids
You can’t wander far without being stalked by the mermaid: the city’s defining mascot is everywhere you look – cabs, buses, flags and so forth. But most famous of all, are the statues dedicated to Warsaw’s ancient protector. Two of these are ringed by tinkling fountains. 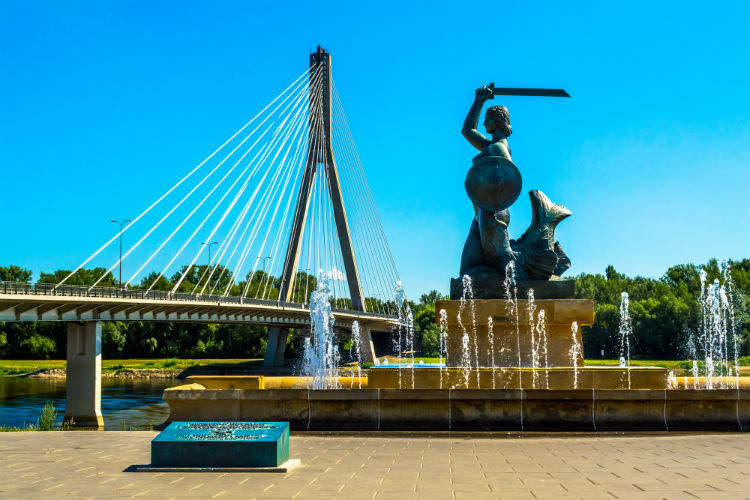 Cast in bronze, the one by Świętokrzyski Bridge is reputedly the last monument to be built before the Nazi invasion, and while the statue survived the woman it was modeled on – a 23-year old poetess named Krystyna Krahelska – was fatally injured on the first day of the 1944 Uprising. 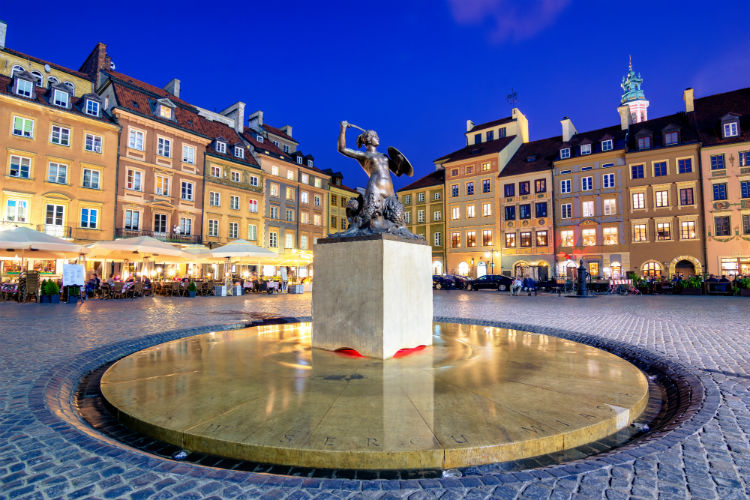 Next up, the Old Town Square, where an immaculate ring of water trickles to the base of the mermaid, thereby catching the reflection of the tenements around. The mermaid herself is a replica of the 1855 version that has since been retired to the Museum of Warsaw.

In With The New
More modern fountains abound, and few are more dynamic than the one at the center of Sir Norman Foster’s Metropolitan building. 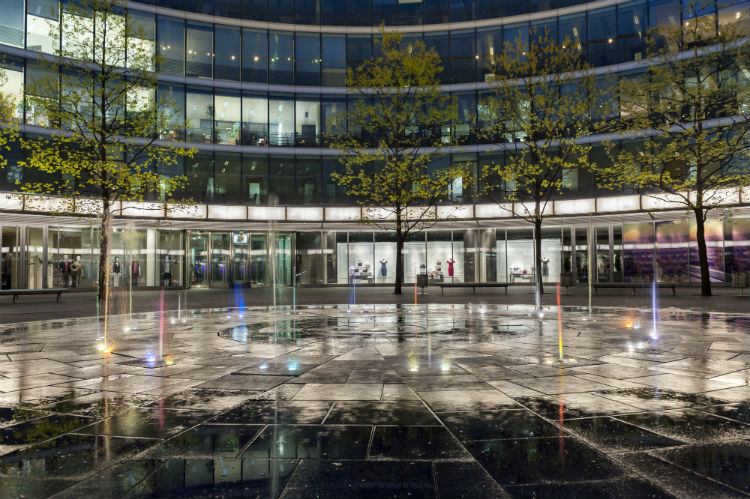 Topping out at a height of 15 meters, it’s widely recognized as one of the first ‘intelligent’ fountains found in the country. Costing over half a million złoty, the Canadian-designed system responsively reacts to wind conditions to ensure no watery disasters. Possibly usurping this though in terms of popularity is the Warsaw Spire. 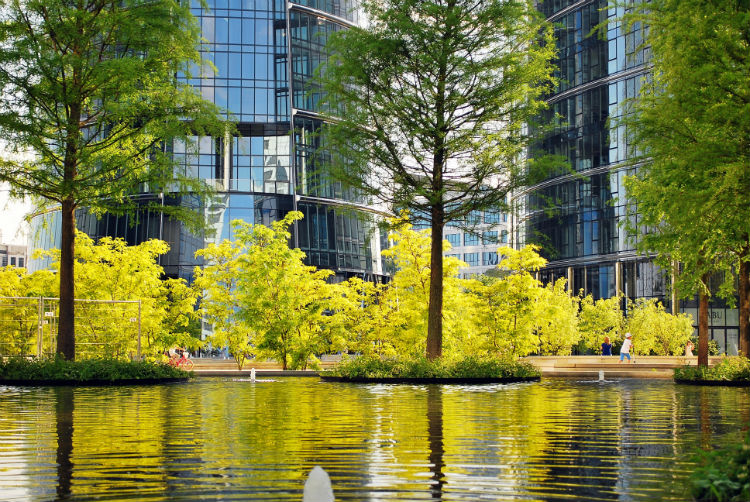 Hemmed in by shrubs and curling pathways, an array of water jets combine to provide a display that’s especially hypnotic come the fall of the night.

Classic Warsaw
The mint-colored fountain by Kino Muranów was designed by Leandro Marconi to feature three boys holding, respectively, an oar, a net and trident. First erected in 1866 on Krakowskie Przedmieście, it made way for the Mickiewicz statue in 1897, only to pop-up again in the center of Pl. Bankowy in 1910. 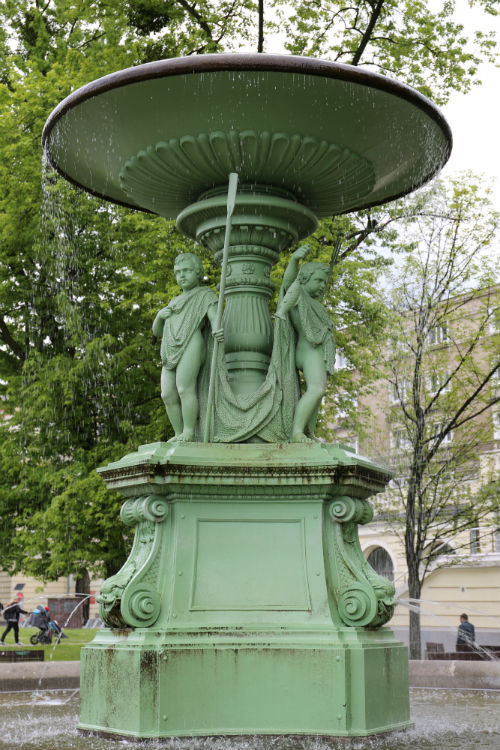 It survived the war, but didn’t fit into the redevelopment plans made for the plac, and was thus shifted again to its current location. With Socialist Realist Muranów on one side, and Pl. Bankowy’s Blue Tower on the other, it’s one of the great examples of the capital’s disjointed nature. 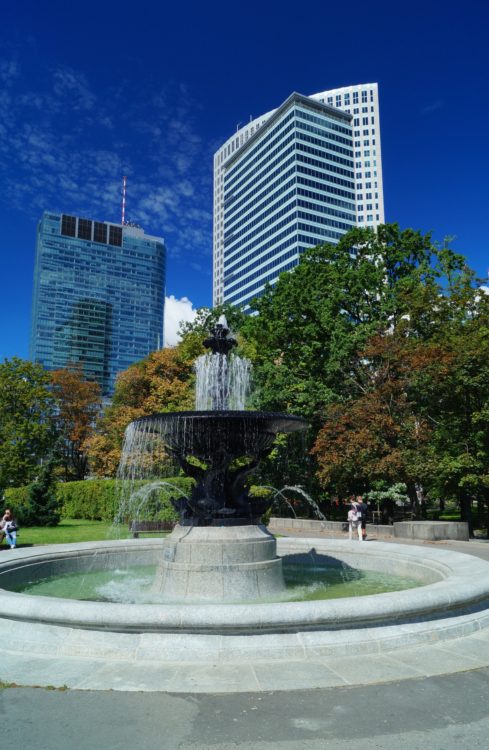 And so, back to the Palace of Culture! Four cast iron fountains can be found on what was once the axis of Sienna and Chmielna; designed in a Renaissance style, and notable for their dolphin features, all were unveiled on July 22nd, 1955. 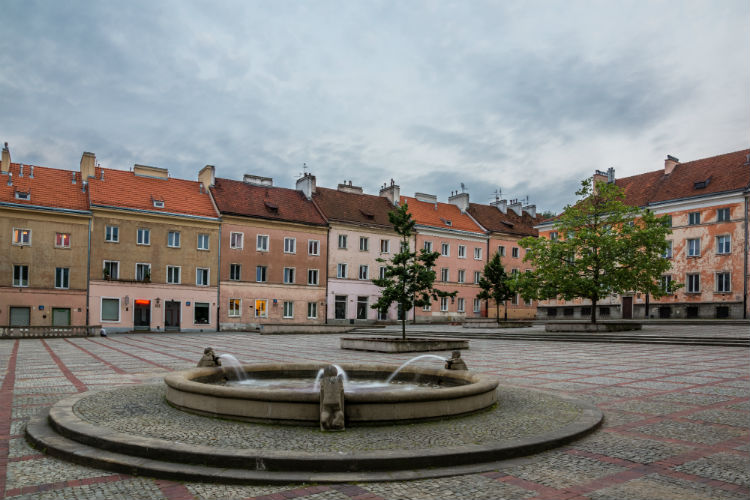 Based on a Socialist Realist blueprint, Warsaw’s first post-war housing project, Mariensztat, was opened to much fanfare in 1948. Though many of the pastel-colored buildings have faded and flaked, the area remains high on odd little quirks: a mosaic of a jolly cat; a statue of a hen-carrying woman; and best-known of all, a central fountain fringed by three stone children. As the brilliant historian Jerzy S. Majewski eloquently notes: “although they’re half a century old, they remain small boys, even if their sandstone faces have become slightly deformed – one has lost his nose, and another an ear.”

The Good Old Days
First inspired by the baroque gardens of Versailles, Ogród Saski was mapped out in 1713 to complement the nearby Saski Palace. In 1727 the decision was made to share its glory with the public, a move that made it one of the first publicly accessed parks in the world – and how the people marveled! 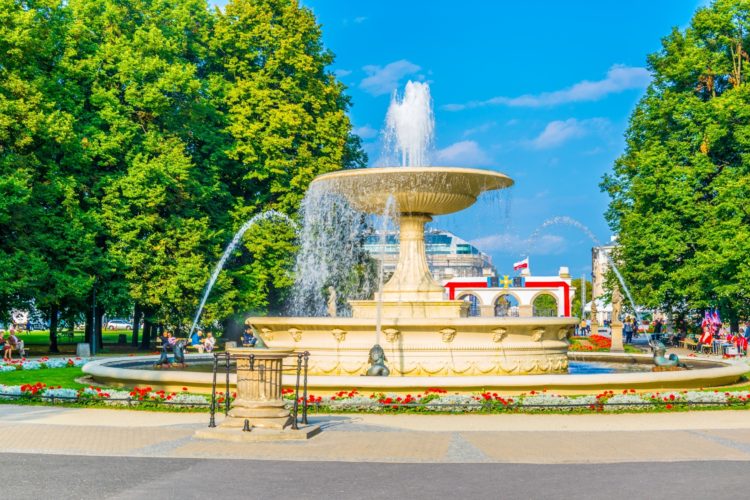 But it wasn’t until 1816 that it assumed its current look courtesy of a redesign by a green fingered Englishman by the name of James Savage. A fountain added by Henryk Marconi in 1855 became the show stealer, with four water-spurting dolphins adding to the pageant. Delving deeper into the park, find another water feature standing in front of a classicist water tower based on the Temple of Vesta in Tivoli. 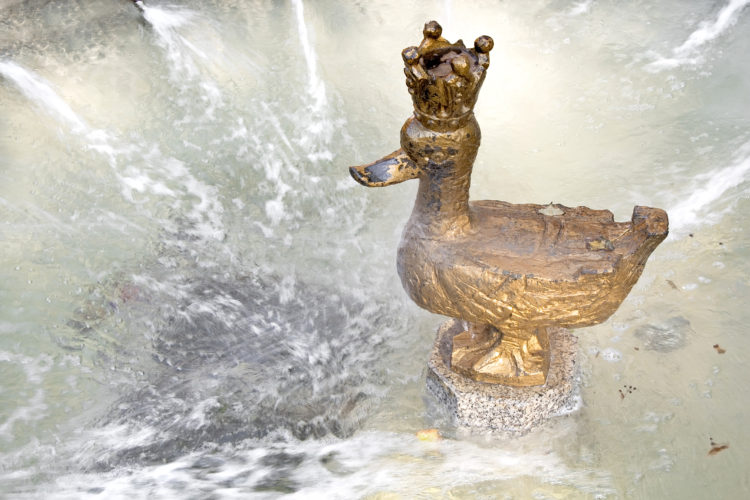 Of all the legends associated with ul. Tamka’s Ostrogski Palace, locals are most likely to be familiar with that of the Golden Duck, a one-time princess turned into a beaked amphibian by an evil sorcerer. Residing in a mythical underground lake deep in the dark belly of the palace, she is said to guard vast treasures in the catacombs down below. Nowadays, a seventy-five centimeter statue of a tiara-crowned duck is the hallmark of the fountain that commemorates this tale.