From The Streets | Warsaw Insider

Fresh from their international travels, the Republic ¥ art movement returns to Warsaw with style to spare… 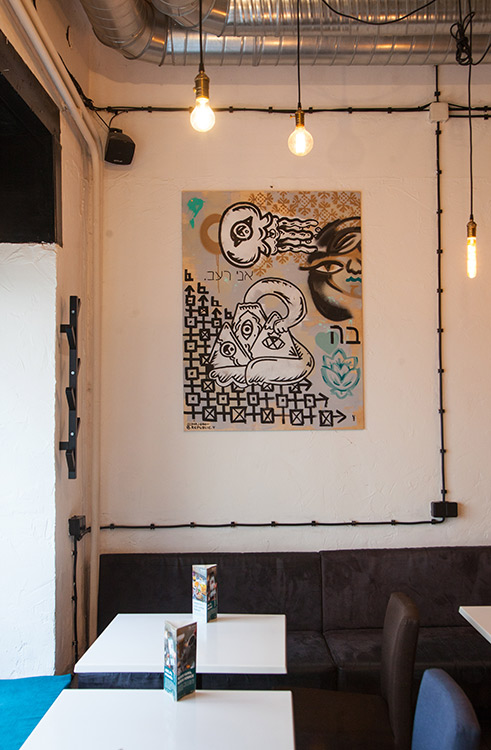 A preposterous, self-invented parallel world inhabited by monsters and other creatures of the imagination, Republic ¥ is the country you’ve never visited, and Dawid Majgat its vagabond-at-large and diplomatic voice.

“It’s an imaginary country that I created,” explains the young artist, “a post-colonial state in the middle of nowhere inhabited by monsters – representing all aspects of human nature, these monsters are my tools and language; by creating the culture and history of this land, I’m able to freely comment on everyday issues such as history, politics and eternal human values. Following the idea that every person has an inner monster, the project is bound together by monst-art aesthetics and the concept of the colonial state.”

A native of Gorzów Wielkopolski, Majgat has been spreading ¥’s manifesto since its foundation, with the Polish capital serving as a potent incubator for his initial idea – Warsaw, though, was just the first step on an artistic journey that has seen the word of ¥ spread globally.

Joining forces with Dutchman Guido Boelman (“The Consul of Republic ¥,” says Dawid), it was on Boelman’s urging that the pair set off on an intrepid international art tour that has taken them to Berlin, Amsterdam, Chicago and beyond. In these places, they have captured the zeitgeist, ‘live painting’ at art fests, in craft breweries, Boho cocktail bars, and inside a range of creative practices.

But having first kicked-off this foreign adventure in Tel Aviv, there is perhaps a sense of coming full-circle that their latest project has seen them return there – only this time, not to the Tel Aviv that sits perched on the Mediterranean coastline, but the Tel Aviv positioned on Warsaw’s ul. Poznańska. Recruited by Malka Kafka, the owner of this pioneering vegan brand, Majgat’s latest work has seen the walls of this uber cool hangout reimagined to maximum effort.

The Philosophy
“Tel Aviv is a Middle Eastern city,” says Malka, “vibrant and colorful, but also dirty and even a little scratched. The streets though, they’re literally a gallery; you can walk around them for hours immersing yourself in the street art. Free walls are worth their weight in gold, which is why many artists are pushing the envelope with their work. Painted using various techniques and styles their projects have created a powerful chaos and multiplicity. We wanted to replicate that on our walls. Dawid understood us at once, and I think even more so because he had already worked on the streets of Tel Aviv. Further, we wanted to invite someone from the younger generation with a fresh outlook on street art. Dawid was that person.” 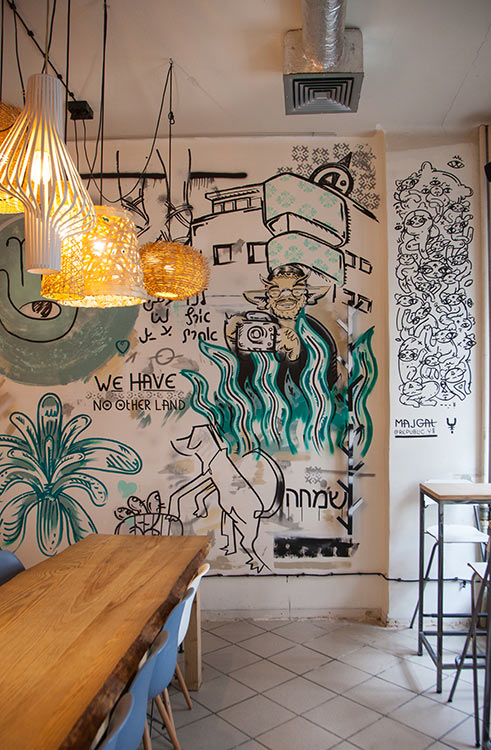 The Job
“We working from nine in the morning till ten at night for three full days,” continues Dawid. “It was a dynamic renovation and we were always in the company of builders, craftsmen, restaurant staff and architects so there was always plenty of joking and banter. Importantly though, painting in front of people allows me to see my work from a different perspective.”

The Art
“There’s a bit of a Bauhaus architectural motif,” says Dawid, “and we also included the Dizengoff Fountain, abstractive plants, happy monsters and lots of little bits to lend the feeling that a group of random people had left their mark on the walls: for instance, you’ll see some Hebrew phrases, handmade stickers and stenciled ornamentations. The ‘We Are Hummusexual’ slogan featuring some female lesbian monsters was a tribute to the classic 16th century painting of Gabrielle d’Estrées, and we also found space for a carrot-shaped menorah which I think serves as a cool icon for the restaurant itself.”

“The monsters who inhabit our Republic have integrated to become citizens of Tel Aviv, so sometimes they’re depicted as Jewish, other times Arabic: in this city, we wanted to show that different cultures can live, create and share land together. Finally, there’s also lots of dogs! The actual city of Tel Aviv is alleged to be the most dog friendly city in the world, so we were sure to include several of those. Actually, one of my female monsters is a homage to my own cocker spaniel that passed away a few years ago.”