metro2 train5 transporation1 travel46
It’s taken a rail-y long time getting here, but Warsaw’s second metro line is finally pulling into the station – and it’s only about...

It’s taken a rail-y long time getting here, but Warsaw’s second metro line is finally pulling into the station – and it’s only about 100 years late. This issue, the Insider takes a deeper look at the metro’s checkered history, its spooky sightings and its alluring sex appeal.

It hasn’t exactly been an Express service. Started in 2010, Part Two of Warsaw’s metro line was originally planned to open its doors in time for Euro 2012. A series of calamities including floods, fires, WWII bombs and general disorder put paid to that, but now the end is

in sight. And that has got locals excited. “They say it will be ready by September and, to be honest, it will be great as it means we’ll finally have an underground subway system which, although not on the same level as the Paris Metro or the London Underground, at least shows that we are a proper capital city,” says Warsaw student Kasia Binkowska, 22. “More importantly,” says boyfriend Rafal Dzidzinski, 24, “it will improve people’s standard of living, increase investment, improve the environment and reduce the number of cars and busses.”

Costing around 6 billion złoty of EU cash, Line 2 will begin the process of connecting East and West. Passing 8-meters under the Vistula River this first (central) part will stretch 6.1 km from Rondo Daszyńskiego to Dworzec Wileński. Eventually, the plan is for it to reach from Połczyńska in the far east all the way across to Bródno and Gocław. And there’s even talk of a third line. But no one’s holding their breath… 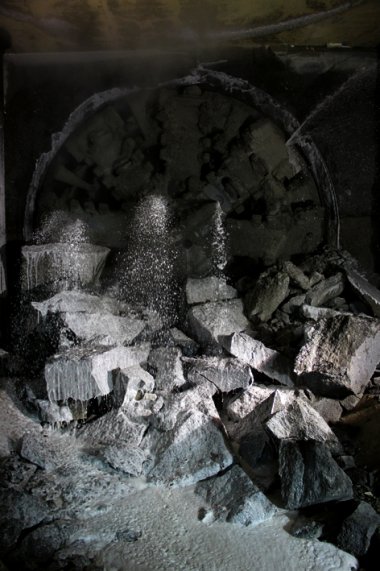 That’s because of the metro’s overall snail-pace history. Conceived in 1918 it was to take nearly 80 years for Line One to come to fruition. Admittedly, the Great Depression got in the way, and then so did World War Two. And then there was over 40 years of communism to deal with. Initially, post-war commie City planners had given the go-ahead for a deep underground system to move troops around swiftly, and by 1953 over 700 meters of tunnels had been hewn out of the capital’s underbelly.

Then Stalin died and work was abandoned, not to be resumed until 1984. The thing finally opened in 1995 with 11 stations, and rolling stock from Russia. In the 14 years since, the line has been extended to include 11 more stations. The effort hasn’t gone unnoticed. Last month CNN included the Warsaw metro in its list of Europe’s 12 most Impressive Metro Stations. Coming in at number 11, praise was heaped on the line’s Plac Wilsona stop which they suggested looked like it had been “built by UFOs.”

Warsaw’s local government denies any extraterrestrial involvement, but that hasn’t stopped conspiracy theorists nor accounts of other oddities. For a start, there’s talk of a ghost train. In 2010, there was speculation that metro chiefs were planning to hire a ghost hunter after workers reported sightings of a mysterious, driverless train hurtling around the track at breakneck speeds. According to some reports, workers were even afraid to go to work, despite underground CCTV failing to pick up any supernatural activity. But workers were adamant. One terrified witness was quoted as saying: “I’ve seen it once. For as long as I live I will never forget it. Rushing around at full speed and with no lights on. I reported it to the management but no one wanted to listen. They just laughed at me. But I really saw it and a few of my colleagues saw it as well. I guess they’ll have to hire an exorcist to drive the damn thing out.”

They didn’t but then two years later during the construction of Line 2, a video emerged online claiming that hundreds of dead bodies lay hidden along the new route.The discovery of the corpses, said the video’s author Herbu Grabie, were being kept under wraps and “workers were ordered to keep the whole thing secret under pain of disciplinary dismissal. Workers have uncovered human skeletons and human remains in various stages of decomposition,” he said. “The number of corpses is estimated to be in the hundreds, but no one knows the exact number. Bones and skulls are loaded directly onto trucks and taken to a landfill and dumped.”

The claims were picked up by news channel TVN who contacted the police and prosecutors office. Both denied any reports of dead bodies or of remains being taken away by trucks. But suspicions remained. Not that that has seemed to bother some. Indeed, according to bearded sexologist Zbigniew Izdebski, randy couples have taken to bonking on it. In his book The Sexuality of Poles in the Early Twenty-First Century, Izdebski says he found that a whopping 4.3 percent of Warsaw’s population had had sex on the metro. This led daily paper Gazeta Wyborcza to conclude: “The Metro is quite a romantic place, which is well known to filmmakers and directors of musicals.”

Whether Line 2 provokes as much amour remains to be seen. For metro bosses, top of their sexy list are the BMW trains from Siemens. With glowing handrails, ambient lighting and front ends looking like “trust-building” faces, the 20-odd, six-car trains will be able to carry up to 1,500 passengers each. All in all, that sounds something worth waiting for. It’s just the ticket, in fact.