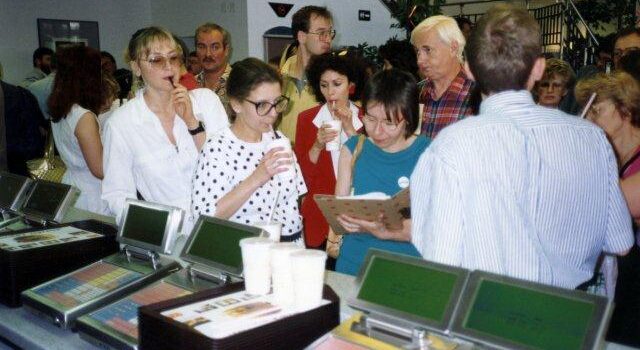 When Ronald McDonald rolled into town he caused pandemonium – now, the city says goodbye to the nation’s first McDonald’s… (By Alex Webber)

Poland’s first McDonald’s closed its doors for the last time on September 30th, pulling the curtain on 22 years of business. Launched on June 17th, 1992, the opening made headline news in a nation still struggling to shake off its communist hangover. “It sounds stupid now,” says Kasia M., “but at the time it really felt like a sign that Poland had joined the wider world.” Like thousands of others, Kasia, a teenager at the time, took her place in a queue that stretched well outside the door for her first ‘taste of the West’. “McDonald’s employed these security guards with walkie talkies to keep order,” she reminisces, “though in truth everyone was well-behaved – you saw some people bringing flowers to give to the staff, and others dressed up in suits especially for the occasion!”

Situated on the corner of Świętokrzyska and Marszałkowska, the food was actually well below-par. Reports from the time speak of fries made using low-quality Russian potatoes, a limited menu and ketchup kept concealed under counters. The customers, however, were undeterred. “I remember reading,” laughs Kasia, “that the staff were so busy that they came close to fainting.” While the building that housed McDonald’s has been universally decried as a ghastly carbuncle, the slated demolition – part of bigger plans to redevelop the Sezam retail center as a modern mixed use development – caused a wave of nostalgia with crowds clamoring to place one final order in the original McDonald’s. “I look at Warsaw now,” says Kasia, “and I see a city that’s grown and blossomed into something dynamic and international – but you know what, I can’t help but think that it all started with McDonald’s…”