As Euro 2016 hits mid-stride, the Insider explores the murky, desperate depths of the local lower leagues…

The eyes of the rest of Europe might well be on France this summer, but mine won’t. Where once I followed the England football team both home and away, nowadays I’ve lost interest: been there, done it, and did it when it mattered. The modern game has killed it for me – the swaggering players and petro-billions, the plastic stadiums and media fanfare. “Football’s never been better,” the commercials boast, but that’s a falsehood spread for TV.

My football life began behind the goal at Bristol City, gathering each Saturday with other spotty youths and swaying, fat elders. Below solid clouds of cigarettes and cider, we’d surge as one bellowing allegiance to our team. It was magic. Like magic, that feeling vanished. I still follow my side, but the excitement isn’t the same. The game, at least the way I loved it, has changed. Yet buried deep down in the lower leagues, that raw, secret world still exists, both in England and in Poland. Amazingly – embarrassingly even – I’ve only just discovered it. 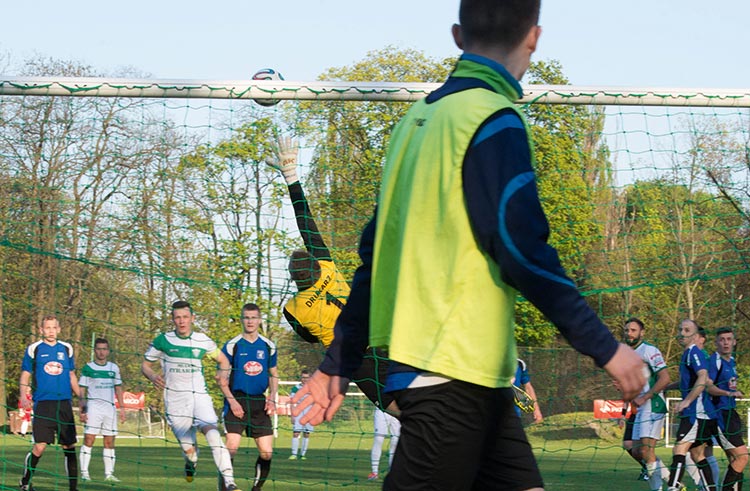 My first dalliance had been quite accidental. I was up in Bielany to visit, out of curiosity, an Italian military cemetery that I’d heard about for years. The graveyard was bolted shut, but the stadium next door wasn’t. A team called Hutnik Warszawa were entertaining – in the loosest possible meaning of the word – cross-city rivals Olimpia. At each end of the shambolic ground, dozens of hard core fans had assembled, and as the game petered out into boredom the respective ends resorted to creating their own diversions, lighting flares and unfurling banners. The attendance couldn’t have been more than a few hundred, yet the atmosphere was superior to anything I’d become inured to. At a stroke, ‘the football bug’ was back.

A week on and the long May weekend has begun. But rather than heading to the pub in celebration, the photographer and myself have squashed into a taxi to watch Drukarz Warszawa, one of many local teams ploughing away in the leagues that don’t matter. Our request to be taken to their stadium – hidden in a north-easterly corner of Park Skaryszewski – is met with the Polish equivalent of ‘whaaaat?’, but after a few laps of the city the driver eventually pins the location. In contrast to the overgrown dustbowl I’d visited the week prior, the home of Drukarz is neat and well-tended. Wandering in for free, I’m expecting a pitch that looks like it’s been shelled by an artillery unit, but instead we’re met by the glorious sight of a prim-looking playing field as green as a billiard table. 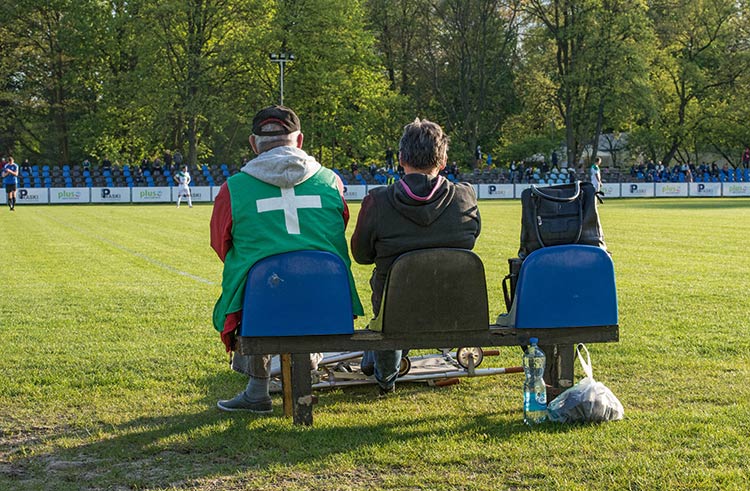 The stadium, it turns out, consists of a shallow bank of blue plastic seats that run-up one side of the pitch. For the two police officers on duty, this must be the easiest overtime they’ve ever claimed: there are no away fans, and a substantial part of the crowd consists of pre-adolescent kids from the Drukarz junior team. The rest of the fans are a mixed bag – a geek wearing a Dungeons & Dragons t-shirt, a dozing grandad, and a few groups of lads who mingle with each other sharing fist bumps and man hugs. So sedate is the atmosphere, we don’t actually notice that the game has kicked-off.

As expected, the football is dismal. Played at a low, lazy tempo against a vibrant green backdrop, it’s not unlike watching the snooker on mute. In his efforts to retrieve the occasional wayward shot, the goalkeeper probably covers more mileage than any of his outfield colleagues. By all rights we should be bored to tears, but in truth it all feels strangely relaxing. On the sound of the final whistle we retreat into the clubhouse to reflect on the day; for the photographer, it’s been an easy reintroduction to the world of football. Still shaken from being lynched by Croatian hooligans during Euro 2012, that he’s survived this match is cause for a beer. 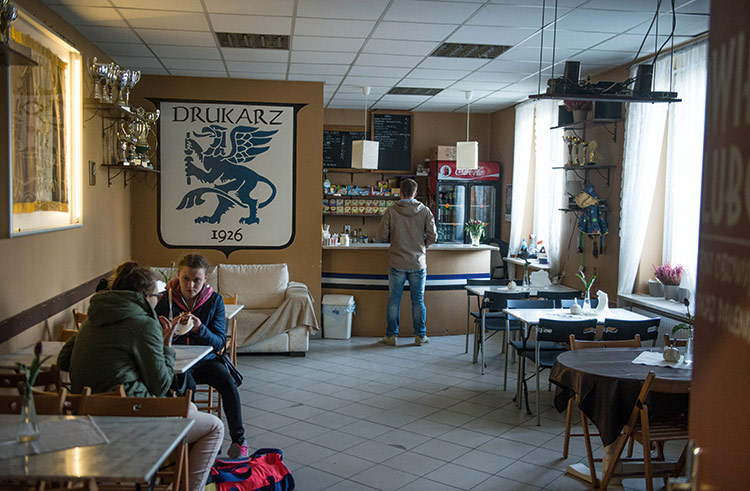 Much like us, the next day feels muggy and downcast. It’s tempting to stay in bed, but we’ve another game to watch, an 11 a.m. kick-off at Olimpia Warszawa. The surroundings are despondent and decrepit, and the stadium a stark concrete memento of Communist times. In spite of a sparse crowd that barely touches 100, the atmosphere is lively thanks to a boisterous contingent of 30 or so blokes. Dressed in the colors of Legia Warszawa, they’re in lusty voice and maintain a barrage of noise throughout the proceedings that ensue.

Their number might be few, but the din they generate is admittedly impressive and we spend most of our time with our eyes on the crowd. The alternative is watching a match of gross incompetence: a complete howitzer of a shot blazes not just over the bar, but possibly the moon. The long balls being launched by either side aren’t so much hopeful as they are completely hopeless; challenges are robust, occasionally psychotic, and when a tackle connects we wince at the crunch. This is proper grass roots football, complete with the appropriate aggression: when the players square up to each other, it’s not in the posturing way of the Premier League’s prima donnas, but like men ready for war. 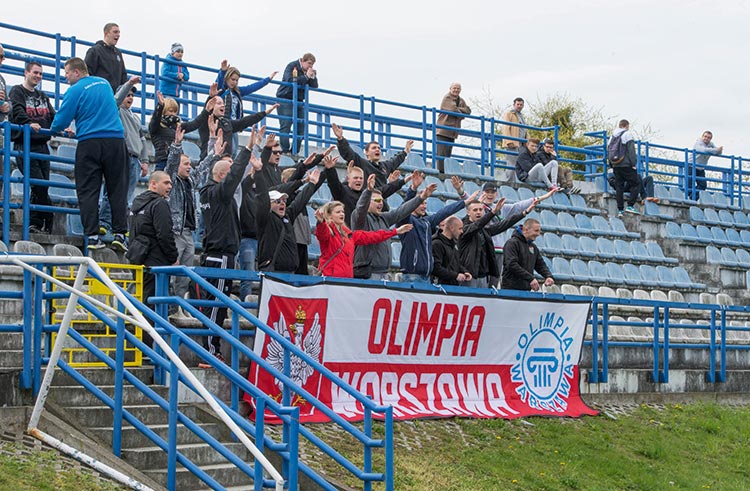 There are flashes of brilliance as well, moments of quicksilver pace and deft little tricks, but these are rare and the work of one lone wolf. All too often, his raking passes are left to bounce off out of play; no-one else is on his wavelength and frustrations between teammates comes to a fore. Confronted with such ineptitude, Olimpia’s manager stalks the sidelines silently seething.

Half-time puts us out of our misery and provides the opportunity to explore the decaying, two-sided stadium, as well as for refreshment inside a rickety, wooden bar. Having been issued with press bibs before the game, we stand out like neon toadstools and are regarded with suspicion by the vocal element of Olimpia’s support. Dirty looks are flashed, but these turn to bemusement when the realization is made that we’re actually foreign. “Why the hell are you here,” laughs the ringleader. It’s not exactly a rapport that we’ve struck, but it’s better than a beating. 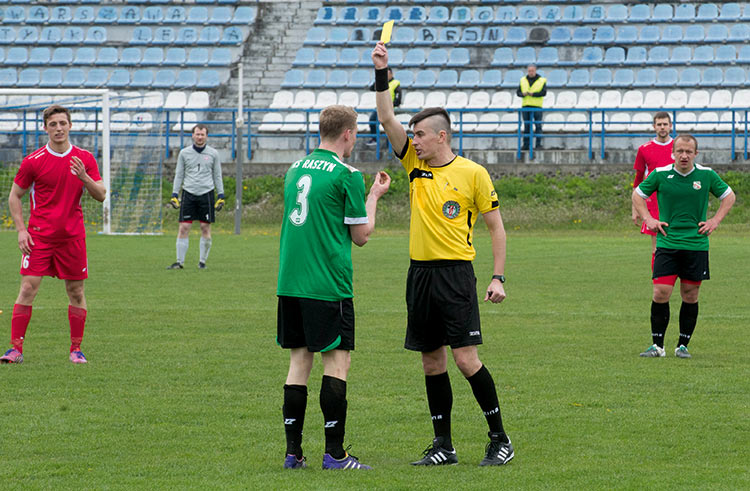 The second half resumes in the same vein as the first, and is defined by lots of huff and puff and wild miskicks. The referee plods around like a grazing cow, sporadically bursting into action to brandish a card. With the clock ticking down, the opposition – K.S. Raszyn – score a goal, and the scorer is solemnly announced by a young guy sat in a tent with a Karaoke mic. And so the game ends, 1-0 to the visitors. It’s been appalling and comical in equal measure, but as we leave it’s with a real sense of buzz. A world away from the egos and greed of the top-level game, it’s been a wonderful reminder of what football’s about. 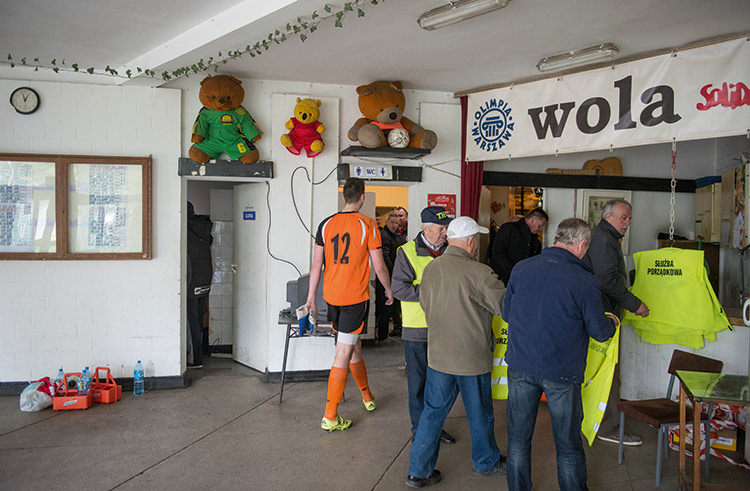