Even in a city gushing with examples of Socialist Realism, the MDM district is on another level…

Sometimes referred to as the ‘propaganda district’ it was here that the commie town planners let idealism run free. “A stone wedding cake covered with balconies built of boulders,” wrote one critic. Although much of the area survived the war, this was not enough to save it. 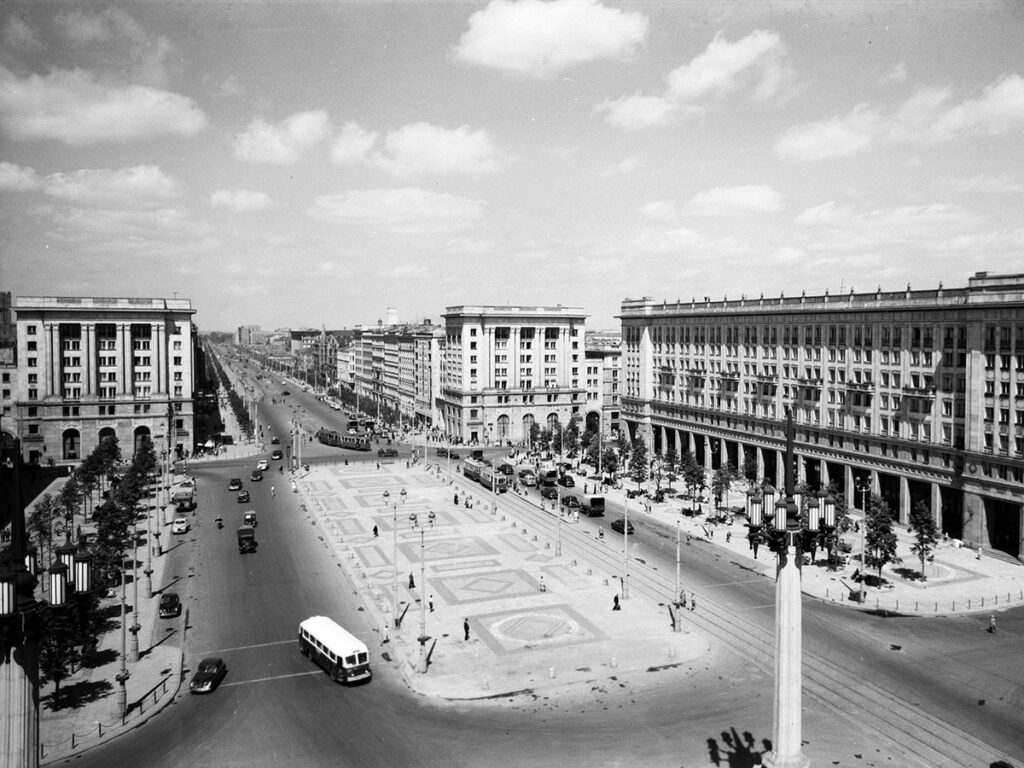 Earmarked to be at the forefront of Warsaw’s redevelopment, the bulk of tenements that had made it through the war were pulled down, seen as little more than unwanted reminders of the city’s bourgeois past.

Covering a vast area with Konstytucji at its center, this flagship district was intended to usher in a new era and house 45,000 high-ranking dignitaries. Utilizing materials seized from the Third Reich, construction was conducted at breakneck pace with particularly diligent workers singled out for praise by the national media. 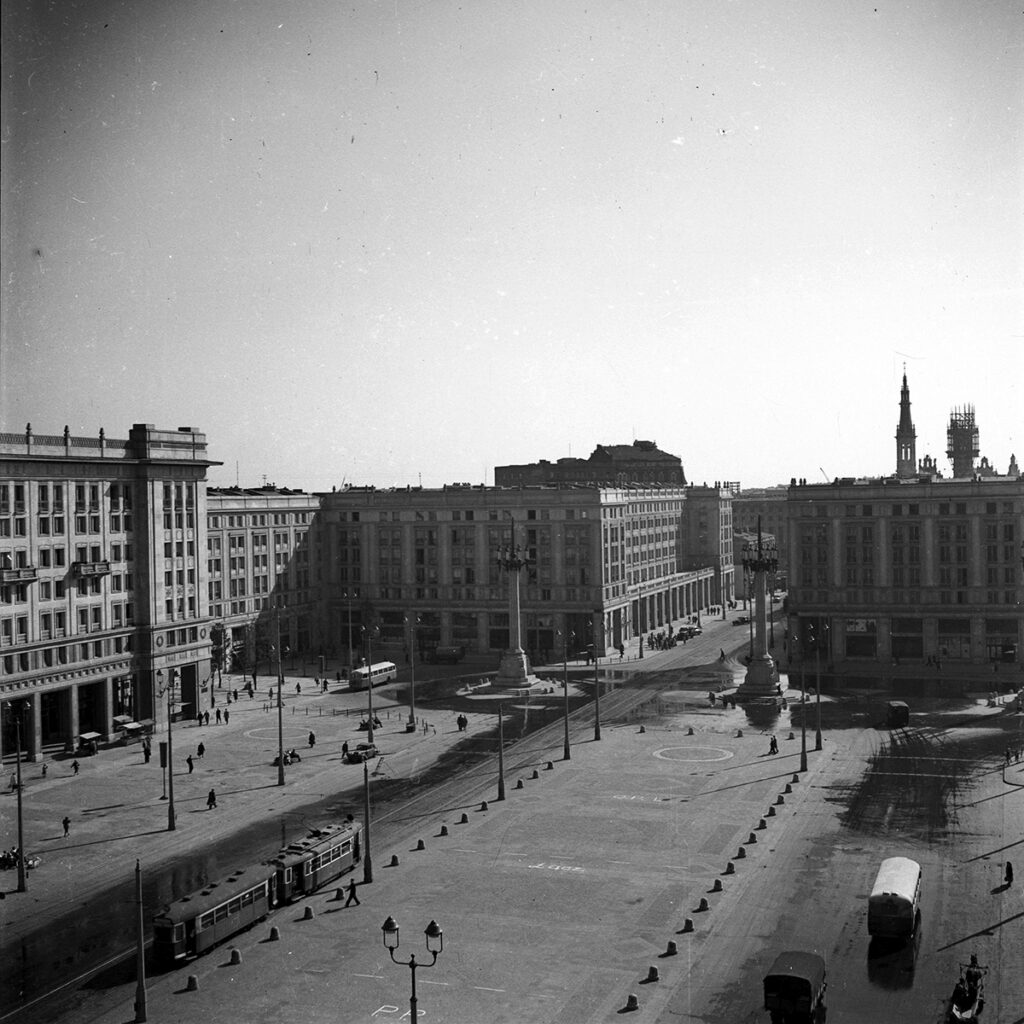 The Utopian vision of the architects was finally realized on July 22nd, 1952. On this day, MDM was opened with delegations from China and the Soviet Union marching alongside enthusiastic Polish children in front of Poland’s leader, Bolesław Bierut. 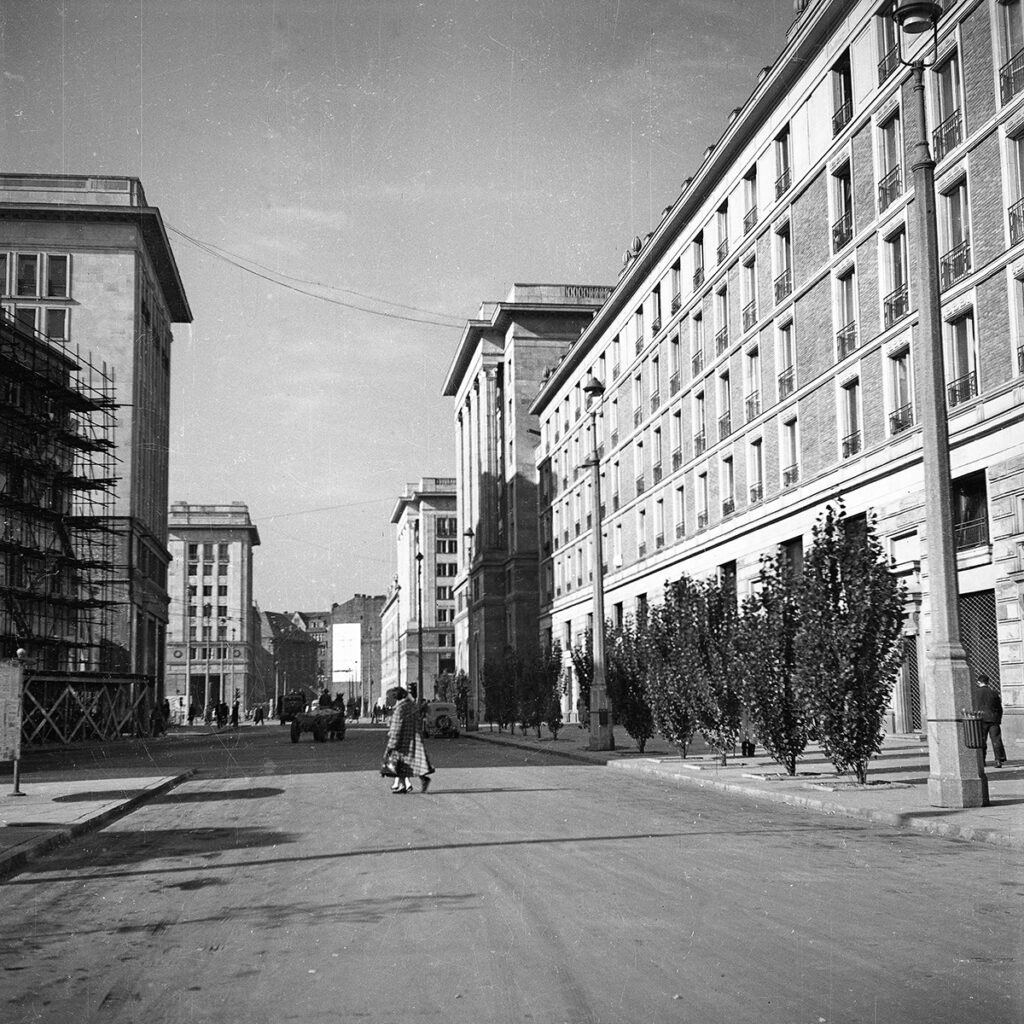 That’s not to say MDM had been truly completed. Several pre-war buildings had survived, while other plans fell by the wayside: e.g., a project to turn the MDM Hotel into a skyscraper. When Stalin died and Socialist Realism was abandoned, these plans were shelved for good. 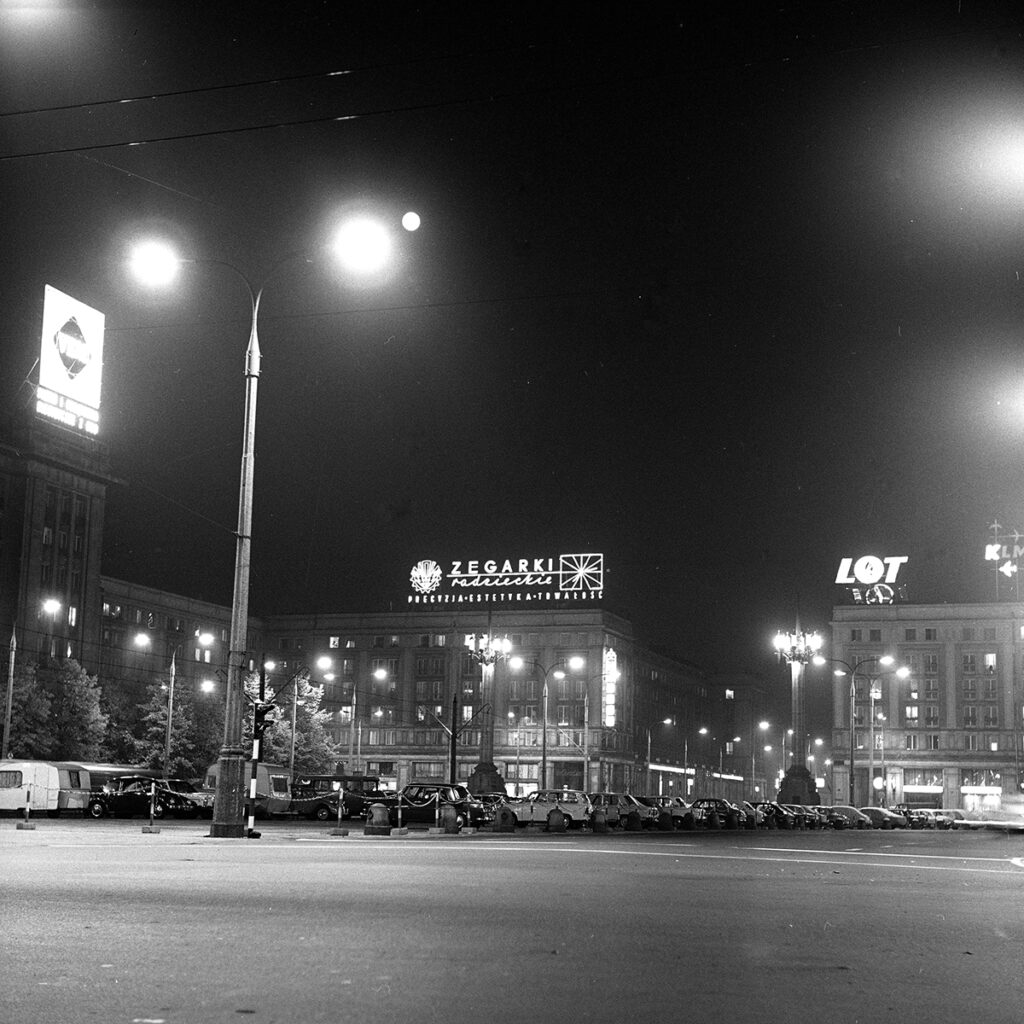 Cornices
Cast your eyes to the top of Koszykowa 34/50 and you’ll see a trio of stone musicians created by Józef Gosławski after the sculptor won a competition – a tight deadline meant his brother and wife were recruited to help realize the project. Later, the artist would find greater fame designing the Chopin monument in Żelazowa Wola and a series of coins issued later in the decade.

Reliefs
Whacked onto the side of Wilcza 33 find ‘the Grape Harvest’, a relief depicting a pair of jovial peasant women picking fruit. Authored by Maksymilian Potrawiak, the 1952 work is understood to have been created to promote the Bacchus wine store and deli that operated below. 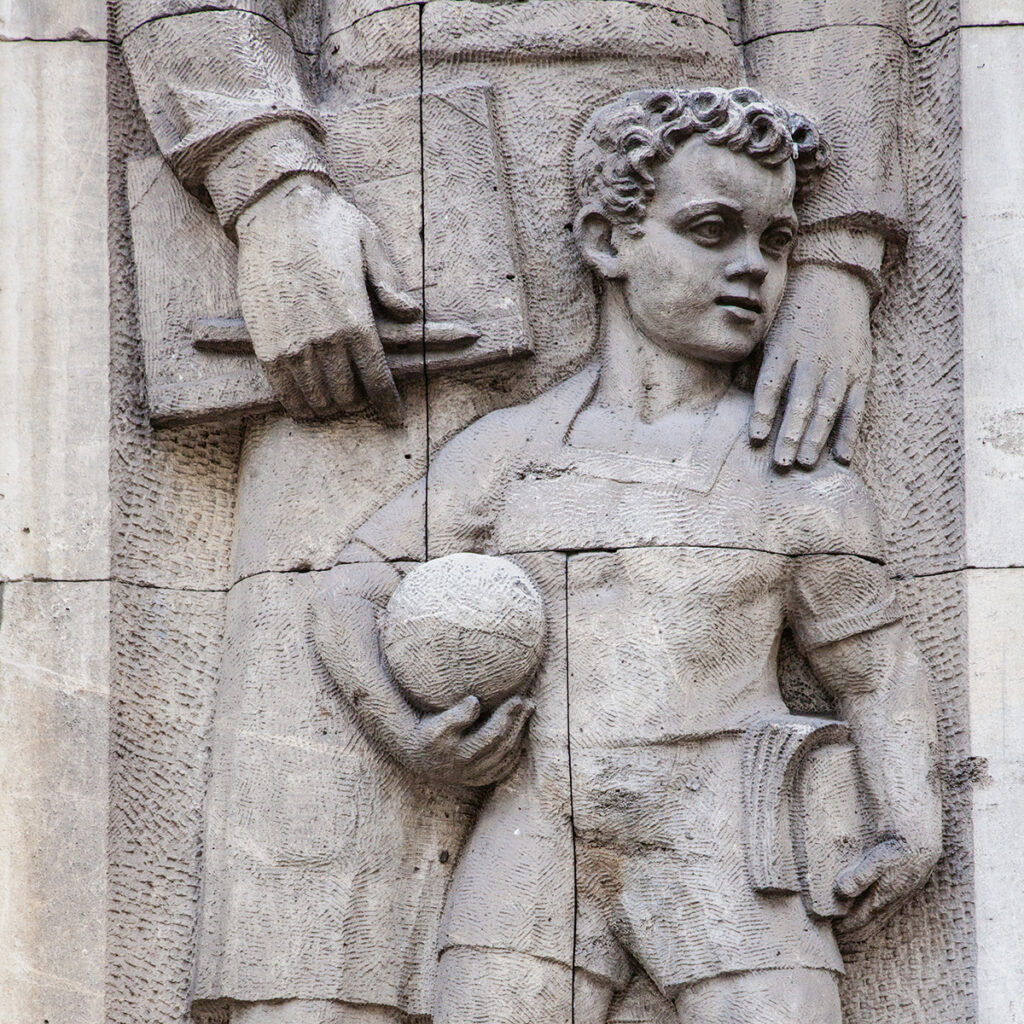 Most famous of all though are the reliefs lining Pl. Konstytucji itself. These include a string of working class heroes sculpted by Karol Tchorek: a miner, a bricklayer, a female teacher, etc. Equally striking, look for a relief by Franciszek Habdas at Konstytucji 3 portraying a group of flag-carrying women and children celebrating MDM’s completion. 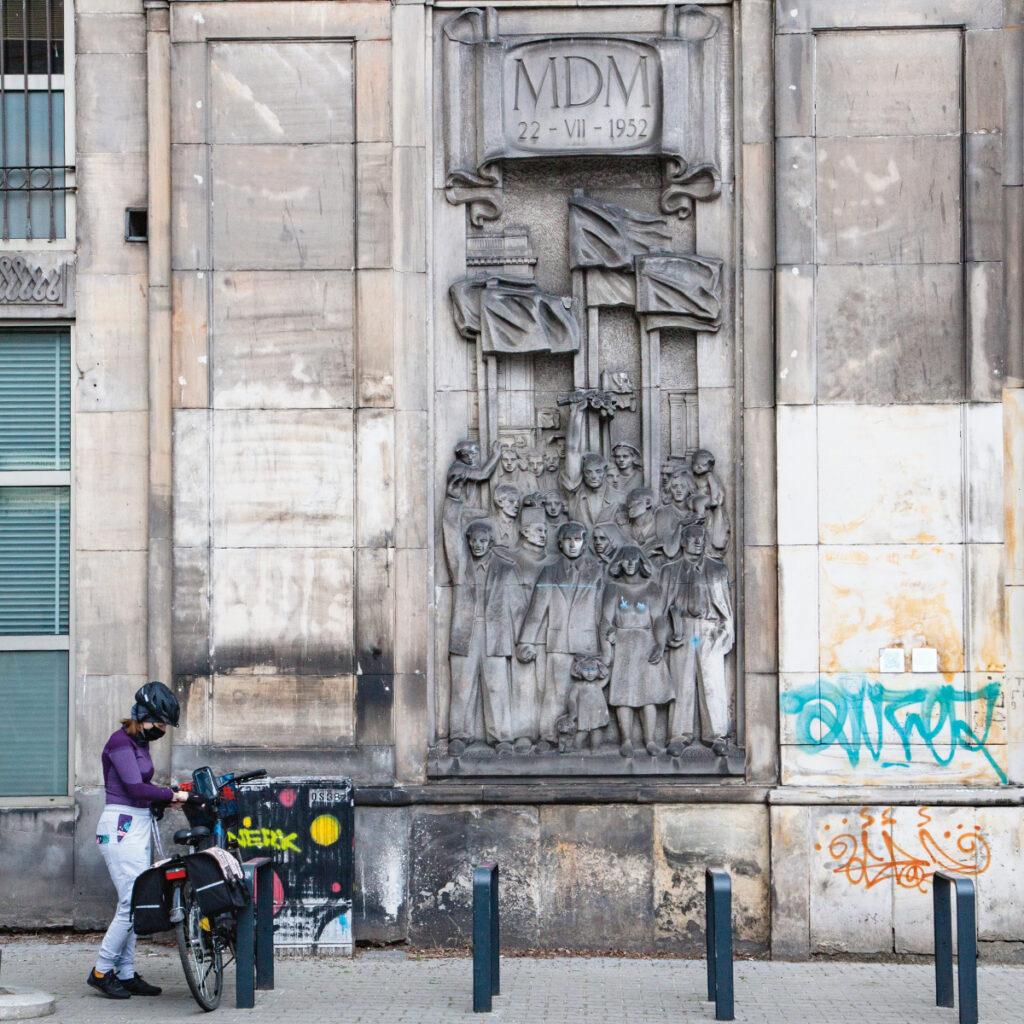 Neons
Installed in 1961 to advertise a ground floor sports store, Pl. Konstytucji’s best-known neon depicts a female volleyball star tossing a ball in the air – over and over again. Designed by Jan Mucharski, one of the godfathers of Polish neon, it was restored in 2006 with the help of artist Paulina Ołowska. Recently, it hit news after a neon lightning bolt was added in support of the women’s rights protests that broke out last year. 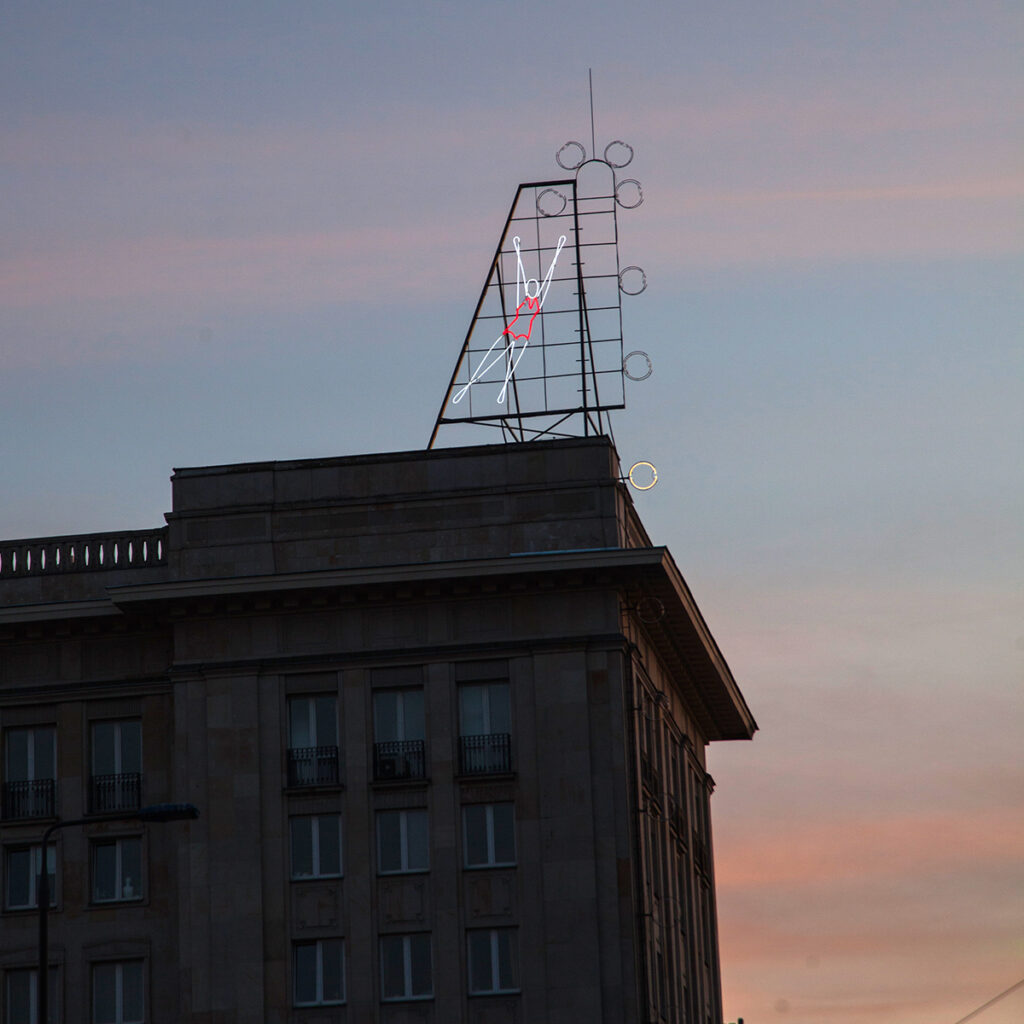 At the forefront of the country’s campaign to ‘neonize’ the city, the area glistened under numerous magical signs advertising the domestic airline, record shops, Soviet watches and luxury restaurants like Cristal Budapeszt. Some have been restored, others now find themselves retired to the Neon Museum. 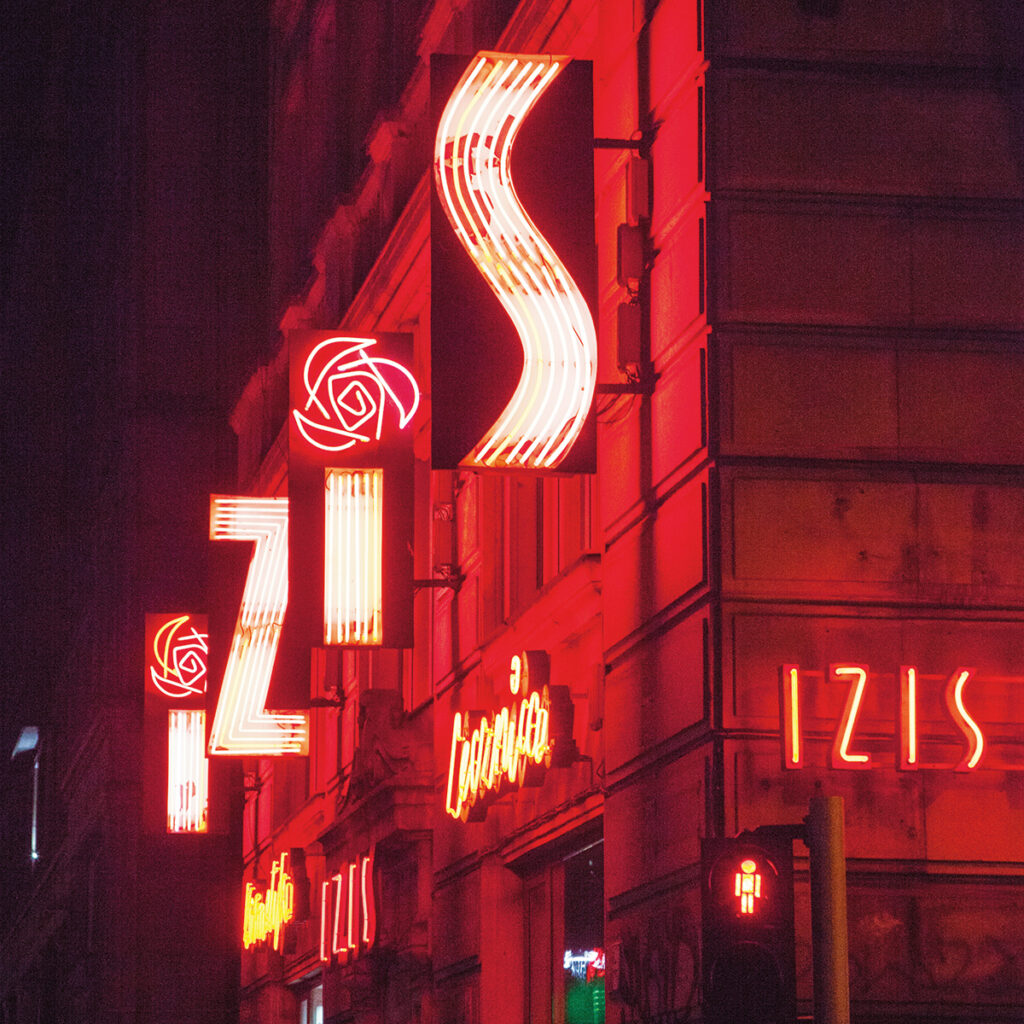 Adornments
Reputed to be one of the first elements of MDM to be completed, the corner building at Wilcza 35/41 featured a chiming clock set on a mosaic designed by Hanna Główczewska – eight months in the making, it was created in Sopot and transported to Warsaw in several pieces. The address would achieve greater fame as the home of Pod Kurantami.

Columns & Colonnades
Though not fully ringing Pl. Zbawiciela, the area’s colonnades have come to typify the architectural style of the area. Though typifying the pompous nature of Socialist Realism, they helped lend the Plac a far more intimate style than Konstytucji, and decades later they’ve been harnessed to the max to serve as trendy café terraces. When talking of columns, though, it is Konstytucji’s trio of soaring street lamps that steal the show. 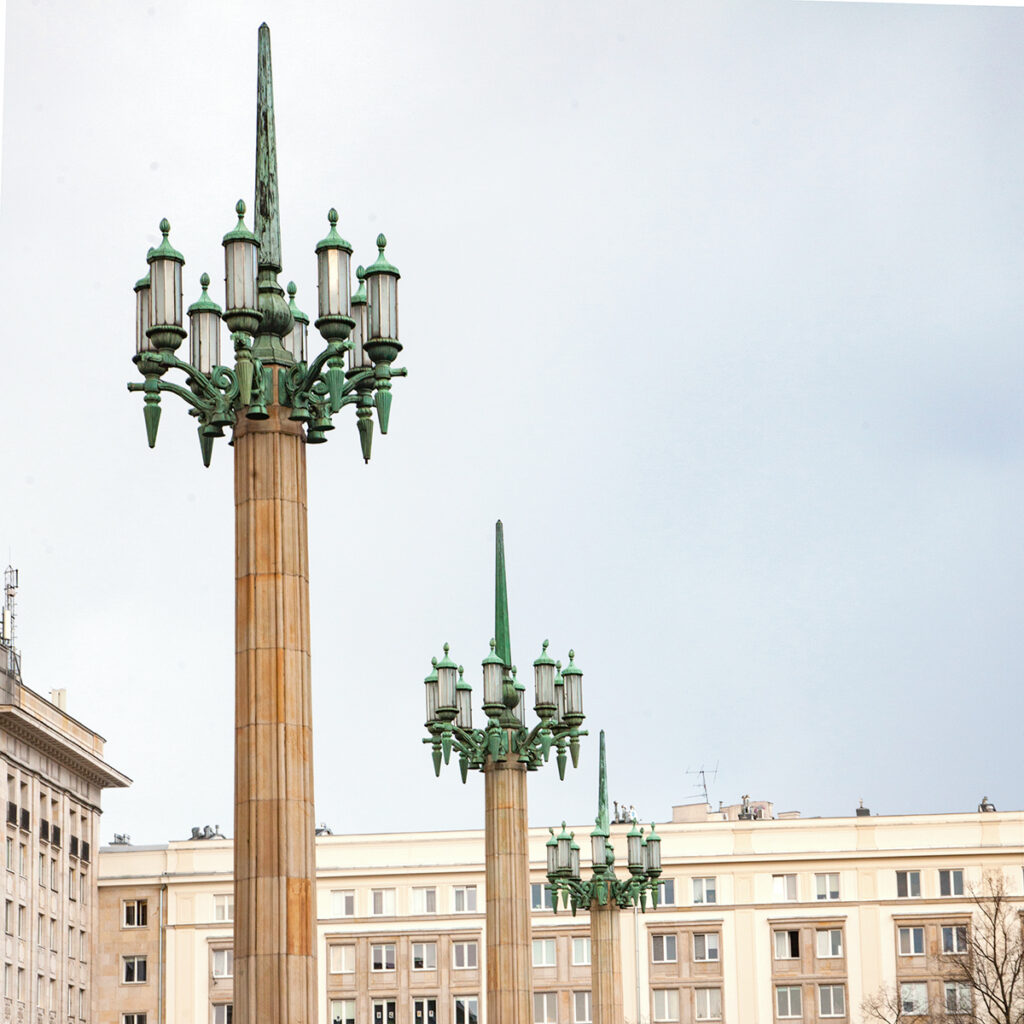 Originally, there was to be a statue of Stalin in their place; later, plans were mooted for three monuments symbolic of the sea, Silesia and the capital. After much debate, these were dropped in favor of the gigantic candelabra you see today.

Plafonds
Such is the bombastic nature of MDM, its details tend to be overt and crass. But there are discreet gems aplenty, and these number Hanna Żuławska’s mosaic plafonds that decorate the passages of Konstytucji. Alive with color, they depict allegorical animals, country folk, flowers, families and upstanding workers. 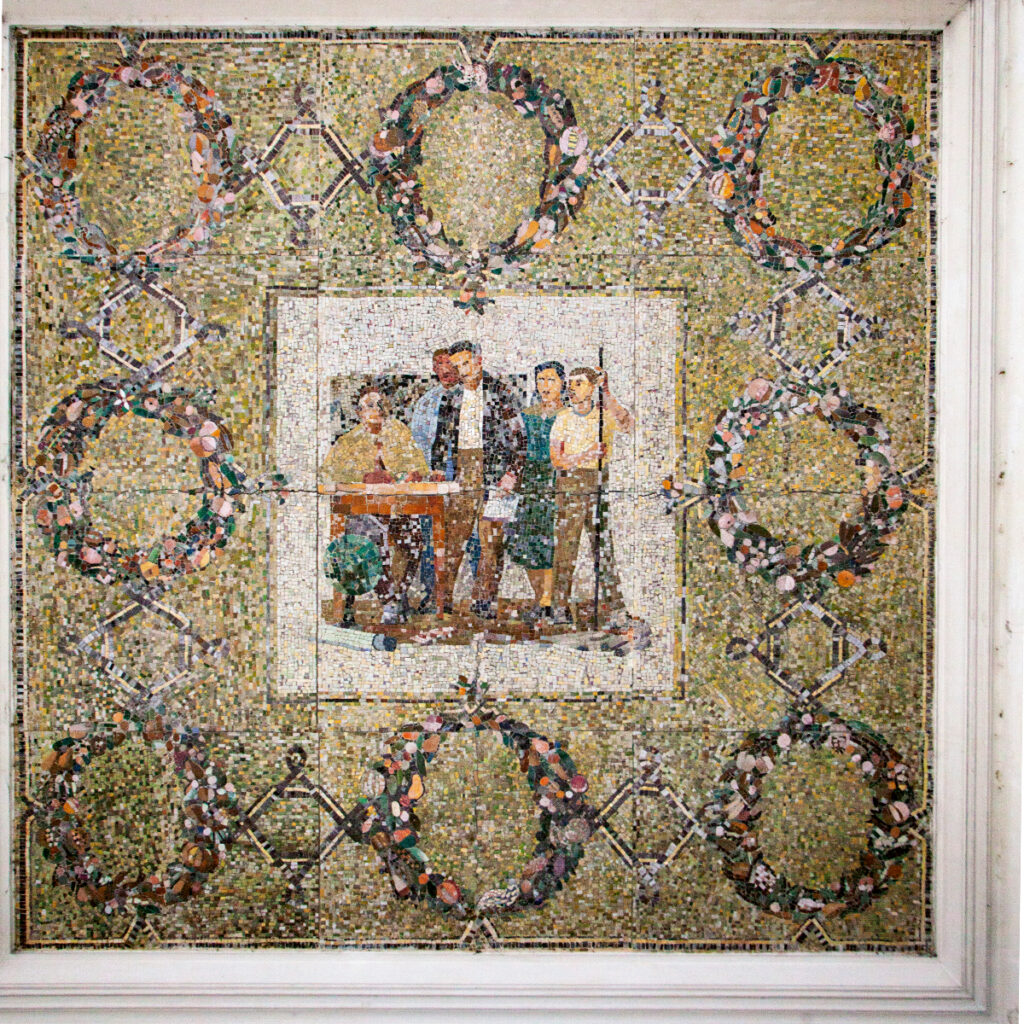