Honey, I Shrunk The City!

Warsaw’s fledgling miniature park takes visitors on a riveting journey through the city’s history. Ladies and gents, here you have Poland’s Top Model… BY...

After a successful summer residence inside Wola’s Sowiński Park, Warsaw’s park of historical model buildings has now moved indoors for the winter and can be visited in the basement of Dom Jabłońskich at ul. Bracka 25. What can you see? Well, although the park at the moment consists of only eight 1:25 scale models of some of the most beautiful and important buildings from Warsaw’s past, at zł. 12 admission it’s certainly worth the visit.

Each building has a full description in English, and the adjoining café sells a fresh cup of coffee for zł. 5. The most impressive model is perhaps Saski Palace, which used to grace the current Plac Piłsudskiego, the lower arches of which now form the Tomb to the Unknown Soldier. The most interesting, on the other hand, is arguably Lubomirski Palace, which in 1970 was spun around by 74 degrees in a feat of engineering that at the time was pioneering. In fact, the model goes as far as to show the curved iron runners that were set underneath the 8,000-tonne palace on which the whole building was moved over a period of 49 days – even figures of workers taking tea break have been included… 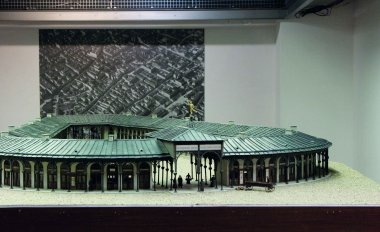 This fascinating Lilliputian world of Warsaw before its destruction in WWII has little in common with plastic models of airplanes that some readers may have enjoyed making as children. Each building takes the team of historians, architects and 3D-printing experts several months to create with most time being taken by researching source material, such as Canaletto’s paintings of Warsaw that now hang in the Royal Castle.

“A typical model might weigh 100 to 120 kilograms and is made from the same material as Lego bricks,” explains Jarosław Zieliński, the project’s historical consultant, leading Warsaw historian and prolific author of over 40 publications about the city. “The roofs are made of real roofing material like copper,” he adds, “and the drains work just like real drains because the buildings are designed to withstand all weather conditions.”

Zieliński’s enthusiasm for the project is almost messianic. Indeed, he planned to take the cloth as a young man but acquired a passion for his home city’s history while taking part in a student strike in the early 1980s when the only reading material available to fill the long days of the sit-in were back issues of Stolica, the capital’s iconic magazine about past and present. His passion came full circle when, in 2006, he was one of a group of enthusiasts who reactivated the very same magazine after its closure 17 years before. 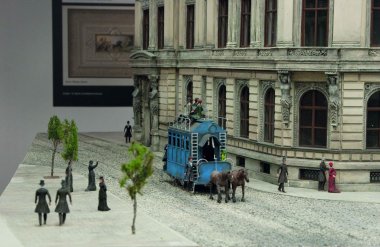 Although the park is very much a small acorn at the moment, the team plan on turning it into a mighty oak. The project envisages a total of 50 buildings spread over a 3.5 hectare site within the city that will be divided into thematic ‘islands’, including the Saski Axis, a Jewish island modelled on the town of Kock, a Mazowsze island including rural treats such as a windmill, country hostelry and traditional farm, as well as train stations, the Wisła river and a horse-drawn tram. Plans for the park also envisage a restaurant and visitors’ center as well as a publishing arm.

The inspiration for it all comes from Polish businessman Rafał Kanuch, whose visit to the famous miniature park at Élancourt near Paris planted a seed that grew into a dream to build a similar park in Warsaw that would show the most beautiful buildings of Mazowsze that no longer exist. The name of the company he set up to launch the venture is Hollywood Builders. Whether the plan will come to fruition or will remain as a Hollywood dream only time will tell.