brewery7 craft beer152
After years spent waiting in the wings, Warsaw has a craft brewery to call its own. The man behind it, Łukasz Kojro, reveals his...

After years spent waiting in the wings, Warsaw has a craft brewery to call its own. The man behind it, Łukasz Kojro, reveals his story…

What’s the Browar Palatum story?
It began nine years ago when my dad and brother gave me a home brewing kit for my birthday. I started exploring different techniques online and soon realized you could achieve better results brewing your own beer than by buying the mass-produced stuff in the shops. The idea of a proper brewery all grew from that. Considering it cost zł. 200, I think my dad realizes his present was the best investment he ever made – now he gets free beer for life!

Is this your full-time job?
No way. I work as an analyst for an international cosmetics company and really enjoy it. Brewing is just a hobby and I prefer it that way – there’s no pistol to my head or pressure to deliver results. At the same time, my professional background has helped get the brewery off the ground as I’m able to understand the business side better than many of the newer breweries.

What’s in the name?
Finding a good name is harder than you think. There’s so many breweries out there that many of the good names are gone – fully booked! Among other ideas, I toyed with naming the brewery after my old dog, but eventually settled for Palatum which is a Latin word meaning ‘palate’ or ‘sense of taste’. My wife’s a vet while my own family has a pharmaceutical background, so while we don’t exactly sit around the dinner table speaking Latin, it’s not uncommon for Latin words to crop up. I think the name fits the philosophy and it also works in different languages – it’s not something a foreigner will struggle to say, pronounce or remember. 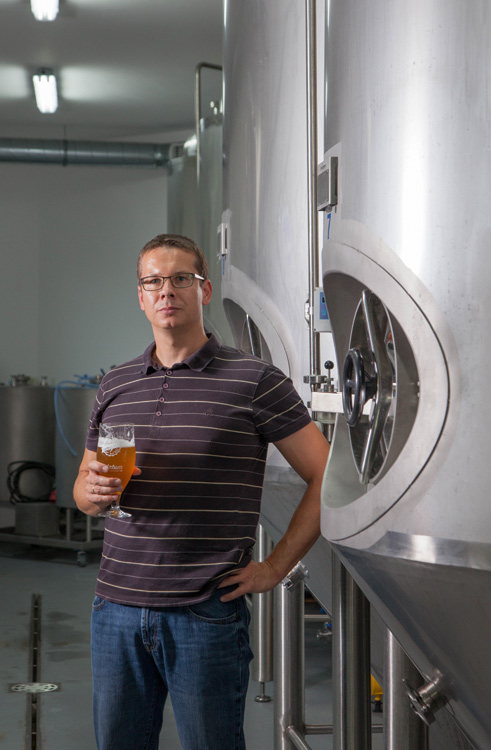 You mentioned your philosophy – what is it exactly…
I think of my beers as homebrews. They’re the kind of beers I want to drink at home. I only brew what I like and think that ‘drinkability’ is key. We’re at a stage of the beer revolution where some people are getting obsessed with exotic, strange beers, but for me the most important thing is for it to simply taste good.

You’re not a fan of this shift towards weird, wacky tastes?
There’s maybe one or two hundred people in Warsaw that are telling people that’s what they should drink, but their opinion is largely irrelevant to the rest of the market. These people have forgotten about the everyday, standard consumer. I think there needs to be more focus on normal, quality beers. While there needs to be room for exceptions and experiments, I’d like to see a bit of a retreat from all of the ‘crazy stuff’.

Palatum is Warsaw’s first craft brewery – what took so long for the capital to join the craft brewing industry?
I couldn’t really say. I imagine cost – as a capital city, starting any business in Warsaw is always going to be more expensive. But for all I know, maybe others just haven’t thought about doing so. There must be loads of people with bigger garages or spaces than the one I use, but maybe they’ve just never thought of taking the jump. On top of that, launching a brewery isn’t as easy it sounds.

What problems do you face?
There’s multiple regulations to deal with. When the authorities hear you’re opening a brewery they immediately assume it’ll be a Żywiec-style operation with trucks and lorries arriving 24/7. You’ve got all manner of laws to deal with, and a basic problem that people don’t really know how to treat craft breweries – a craft brewery isn’t the same as a pizzeria, yet many of the same legal standards are applied. There need to be barriers in place but also a bit more common sense. These aren’t the only considerations: raising capital is hard, and there’s also a shortage of American hops – you don’t really get the chance to sample them beforehand, so you’re usually buying them ‘blind’.

How come you’re not bottling your beers?
At 74 sq/m I’m guessing this is the most compact commercial brewery in Poland – I don’t have space! But it goes beyond that. Once you start bottling your beers you need to think about logistics, marketing, etc. You create more problems. Most importantly, you lose quality. With bottled beers there’s a bigger risk of oxidization. I don’t have that worry – as things stand, when beer leaves this brewery I know it does so in optimum condition: it makes me proud to know there are times you’ll find it on tap in central Warsaw quite literally within two hours after it has left the tank!

What’s next for Polish craft beer?
This is still a niche industry – I’m positive 99% of Poles have never even tried a craft beer. In this respect, there’s still a huge amount of room for the industry to grow – and I’m sure it will. On a personal level, I’d love to see more Belgian-style beers hit the market. In fact, that’s what I’m going to try brewing next week.

How are your beers best enjoyed…
The Imperial Russian Porter is all about fire in the chimney and a dog by your side. The APA is an evening out with friends: good conversation and losing count of what you’ve drunk. The wheat beer, meanwhile, that’s best saved after a hard day at work stood around a grill in the garden!