It’s a picture that has compelled people for decades: now, the search is on to find the girl pictured in one of the classic photos of post-war Warsaw.
By Stuart Dowell | Photograph by profimedia/corbis/Reginald Kenny

Warsaw, 1946. A young girl, possibly 8 or 9 years old, although after years of wartime deprivation possibly older, stands on top of a building wearing shoes and a blouse that are too big for her. As she looks out across what was formerly the Warsaw Ghetto, her gaze met by an ocean of total devastation, she brushes her windswept hair away from her eyes.

Who was she? What was she thinking as she took in that bleak panorama? What happened to her during the war and after? Is she still alive? These are some of the questions that prompted Patryjcja Jastrzębska from the MASŁAW Mazowsze Appreciation Society to launch an appeal to find out who the girl was. The search has created a huge amount of interest in many countries and the campaign has involved social media appeals, presentations and a poster campaign around Muranów where the picture was taken.

Just a few days after launching the appeal, someone came forward saying that they knew who the girl was and gave a name and address – in Sydney, Australia. Contact was made and indeed the woman had lived in Muranów, the district where the photo was taken, just after the war. She was deeply moved by the picture but finally admitted that she couldn’t remember ever posing for a picture on top of a building.

A short while later, a different person came forward saying that he knew of a woman now living in Pomerania but who used to live in Muranów and who had often mentioned that she walked around in shoes that were too big for her. That lead is currently being followed up.

The photograph was taken by Reginald Kenny, a photographer from the US who in April 1946 was accompanying former US president Herbert Hoover, who was visiting Warsaw to discuss humanitarian assistance. Some inspired sleuthing by local journalist Marek Kossakowski has pinpointed the location of the building on which the girl stood as ul. Stawki 5/7. Erected in 1938, the building originally housed a school but it was used during the war by the SS to organise the deportation of around 300,000 Jews from the Warsaw Ghetto.

The building’s location was convenient for the SS as it was opposite the German-created Umschlagplatz, a walled-in square where Jews were processed before being packed into cattle wagons bound for the gas chambers of Treblinka. The building currently accommodates Warsaw University’s Faculty of Psychology.

The girl in the photograph in her oversized clothes adds a touching innocence to the horror of the scene that she is viewing; creating an image that is not simply one of the thousands of photos showing the scale of Warsaw’s wartime devastation but one that is iconic of that time. The attempts to find out the girl’s identity are valuable and understandable; however, the photograph’s real power comes from the way that it shows how the Ghetto, as Patrycja Jastrzębska says, “was reduced not into ruins but quite literally into a pile of rubble”.

After the Warsaw Ghetto Uprising of 19 April to 16 May 1943 in which around 1000 Jewish fighters fought not for their freedom but for death on their own terms, and after the subsequent slaughter or deportation of around 71,000 remaining Ghetto inhabitants, the head of the SS Heinrich Himmler ordered that the Ghetto be completely demolished. In his earlier secret order of 16 February 1943 he stated “…we must achieve the disappearance from sight of the living-space for 500,000 sub-humans that has existed up to now, but could never be suitable for Germans…”

After the Ghetto had been turned into a desert of bricks and stone, the Germans used it as a killing site for Poles held prisoner at the nearby Pawiak prison. The Ghetto also housed the Gęsiówka concentration camp, in which a small number of Jews were held to recover valuable materials from the rubble and coax out Jews who were hiding. Upon being found they would be shot and the Gęsiówka inmates would have to pile them up and burn them. The conditions were so appalling and the work so gruesome that one small group of Greek Jews sent to work there pleaded with their SS guards to be allowed to go back to Auschwitz.

The organisers of the appeal are still asking for any information about the girl’s identity to be sent to tubylotustalo@gmail.com 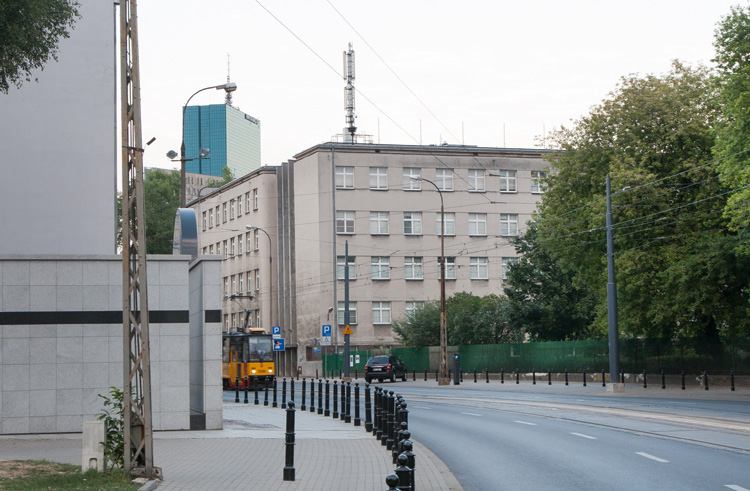 The Building
Stawki 5/7, the building from which the picture was taken, was one of only a handful that survived the razing of the Ghetto. It’s inglorious past is commemorated by way of a stone tablet that reads: “From this command building a branch of the SS oversaw the 1942-1943 deportations from Umschlagplatz from which thousands of inhabitants of the Ghetto were taken each day to the Treblinka death camp.”