I love the occasional foray to Łazienkowska, and there aren’t many thrills more genuine than hearing the stadium rise as one to raucously recite Czesław Niemen’s epic ode to Warsaw. It’s a moment of pure electricity that makes the hairs stand on end. For all that, my enjoyment of Legia is undermined by the fact that, basically, I don’t like what modern football has become: the membership schemes, the swaggering players, the stupid seats and general greed. It’s just not the game I fell in love with. Which is why, yesterday, you’d have found me slipping down the league ladder to catch Hutnik Warszawa take on Olimpia Warszawa. 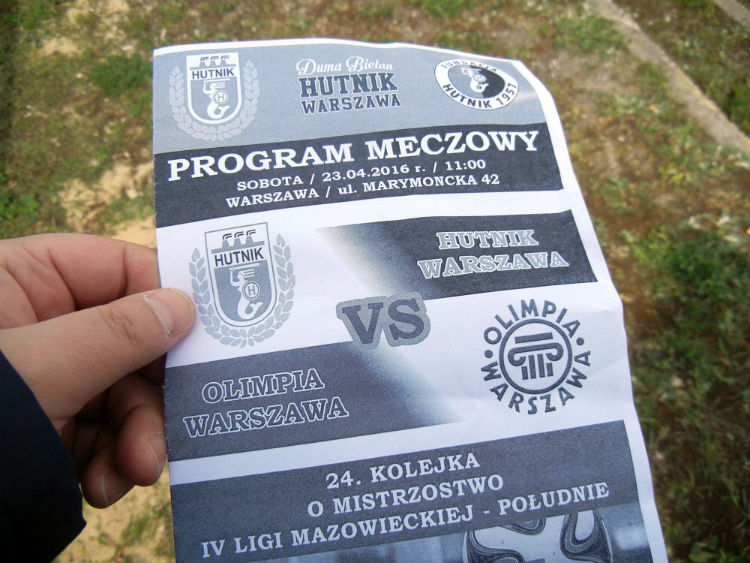 As far as grass roots football goes, this is as real as it gets. The stadium, if you can call it that, is little more than a disintegrating concrete heap that, you sense, is almost in danger of being eaten by the forest that rings it. 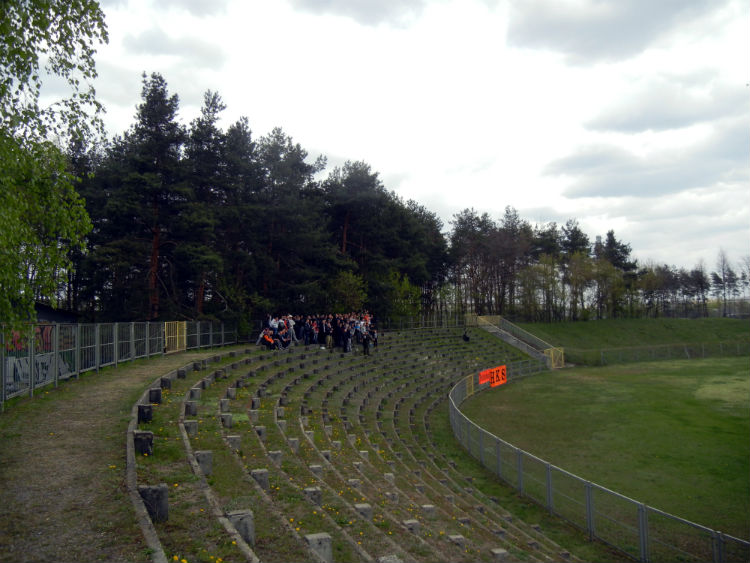 But in an age when the match day experience has become increasingly artificial, the very nature of this dilapidated beauty is a reminder of a lost era. 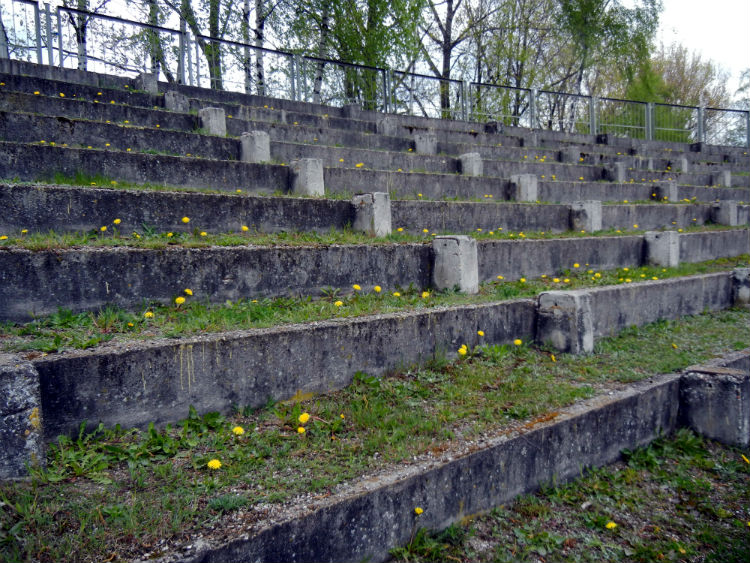 As someone more used to attending games held in anonymous big box developments, Hutnik’s shambolic ground has a sense of glory in the truest of senses. 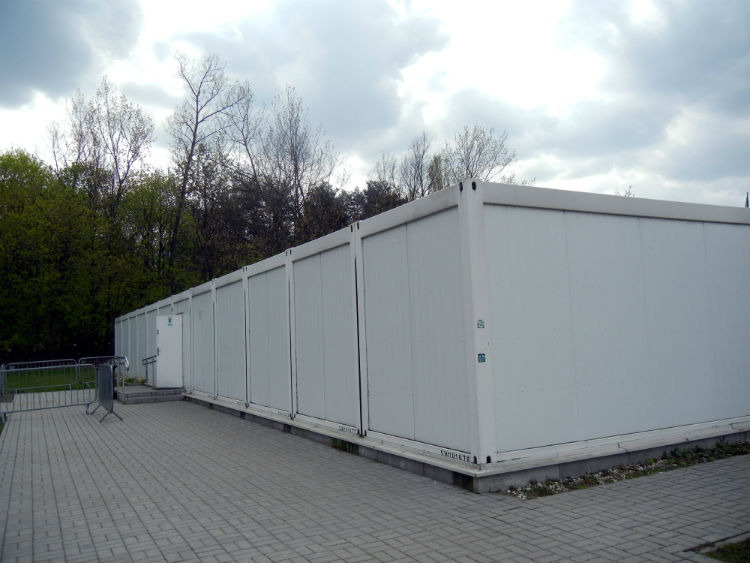 Can you imagine Ronaldo getting dressed in a portable cabin? 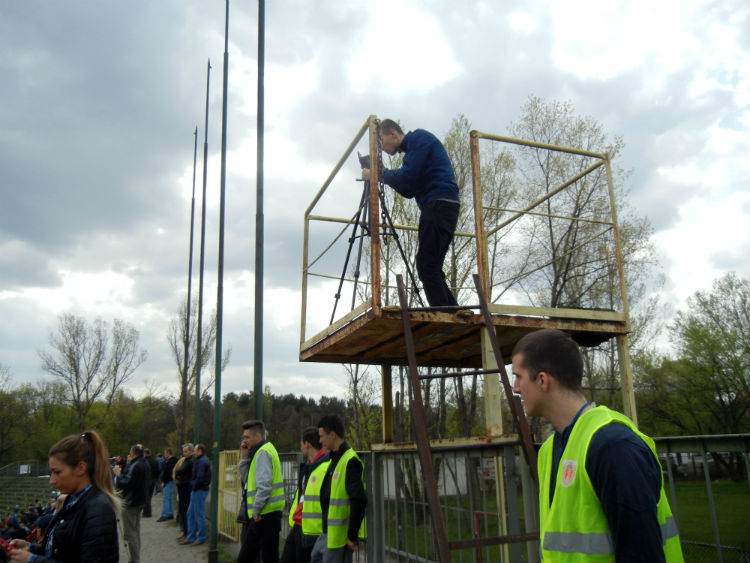 And this has to simply be the best press gantry I’ve ever had the fortune to see. 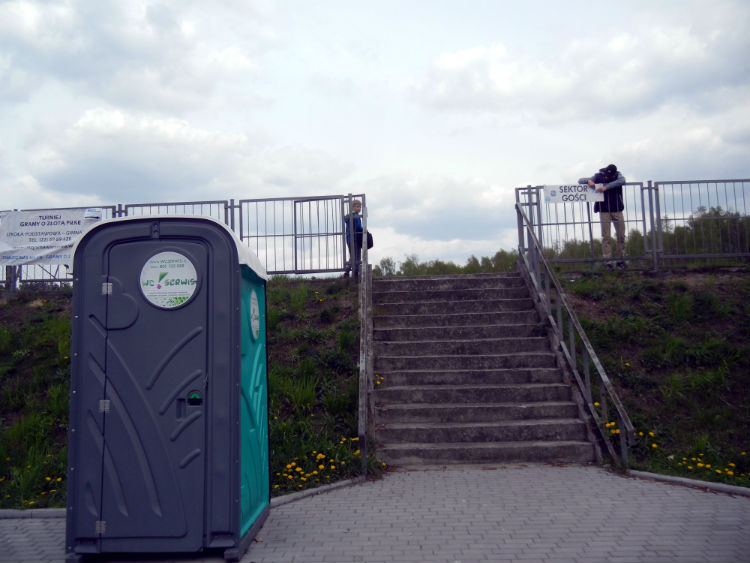 The facilities aren’t so much Spartan as practically non-existent. 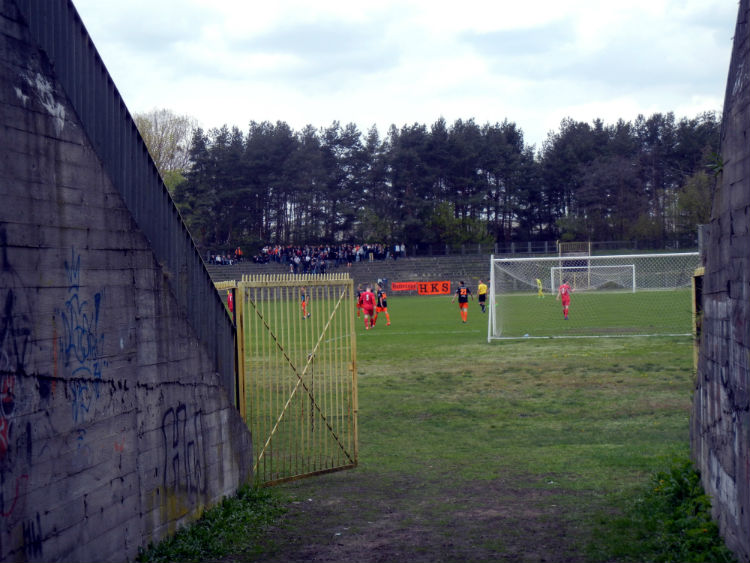 Scoping out the ground, I’m startled to find myself mistakenly in the players tunnel – the temptation to improve the game by jogging onto the pitch races through the mind. 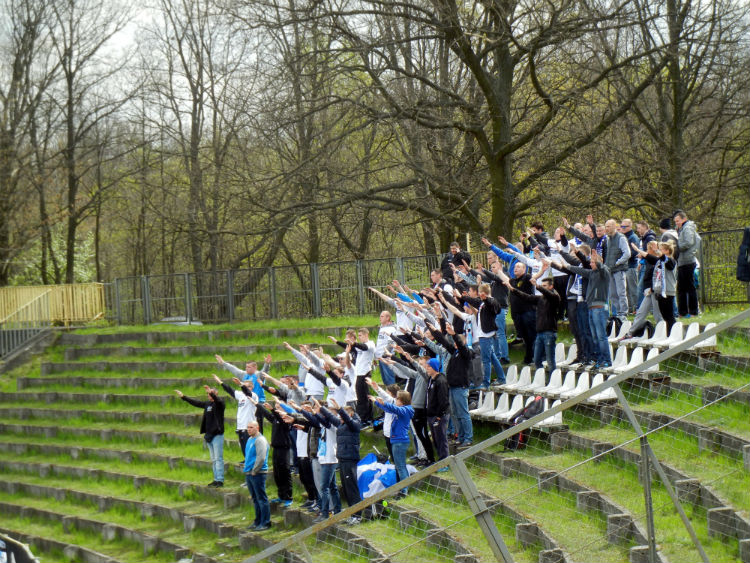 The football is, at best, dismal, but the atmosphere is surprisingly lively, aided by a healthy following of vocal Olimpia fans. 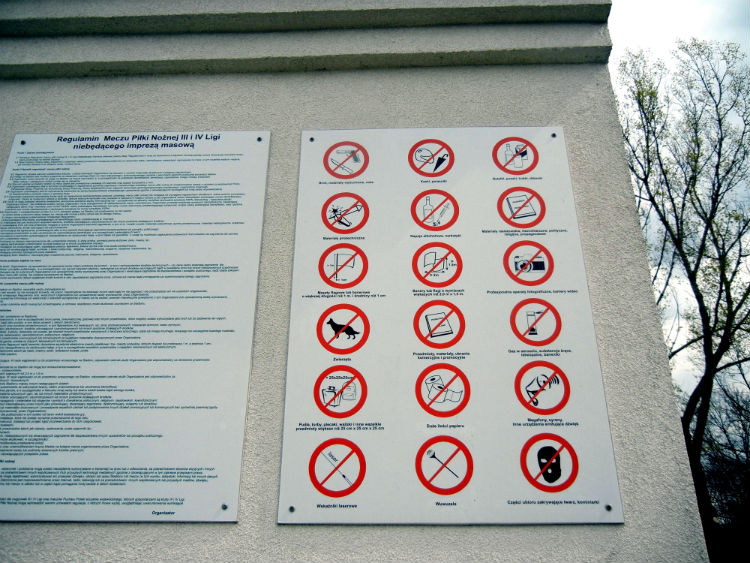 In spite of the long list of do’s and don’ts, these regulations appear to be more of a recommendation… 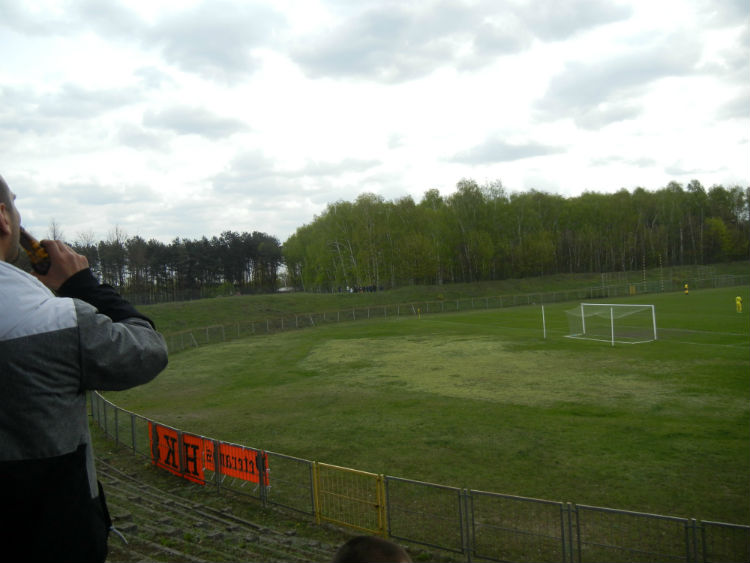 There’s plenty of beer swilling openly going on, and despite the inhuman kick-off time (11 a.m.!), spirits are buoyant as both sets of fans get right behind their team. 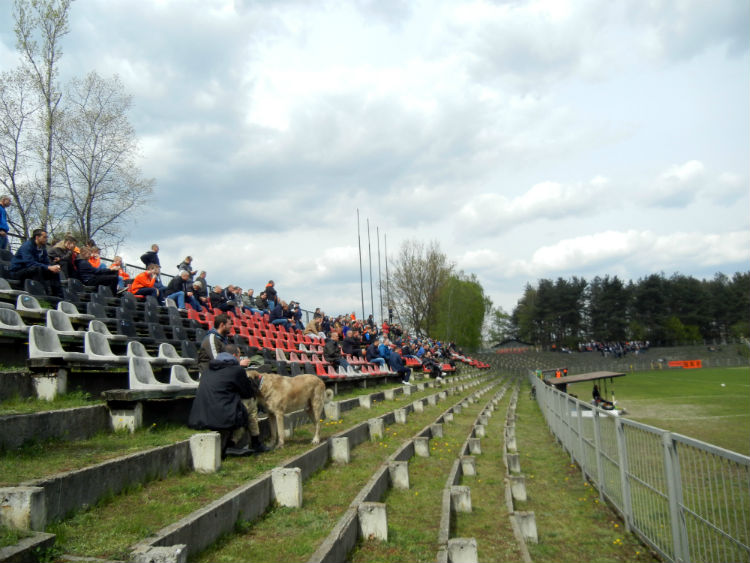 And then, of course, there’s just those who use the match for some quality dog time. 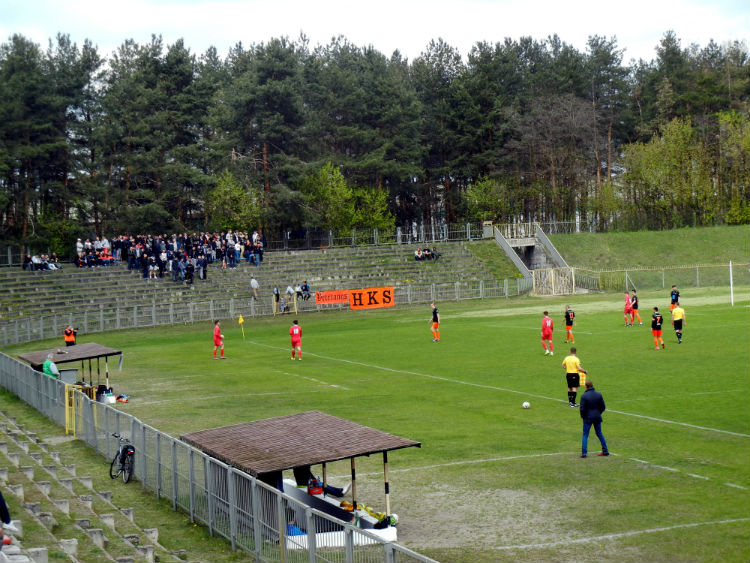 The match descends into a grisly hoof-and-hope affair, and with little to love on the football pitch, it’s the atmosphere that captures the imagination: flags, banners, flares and song. Typically, my camera runs out of juice just as it all heats up. 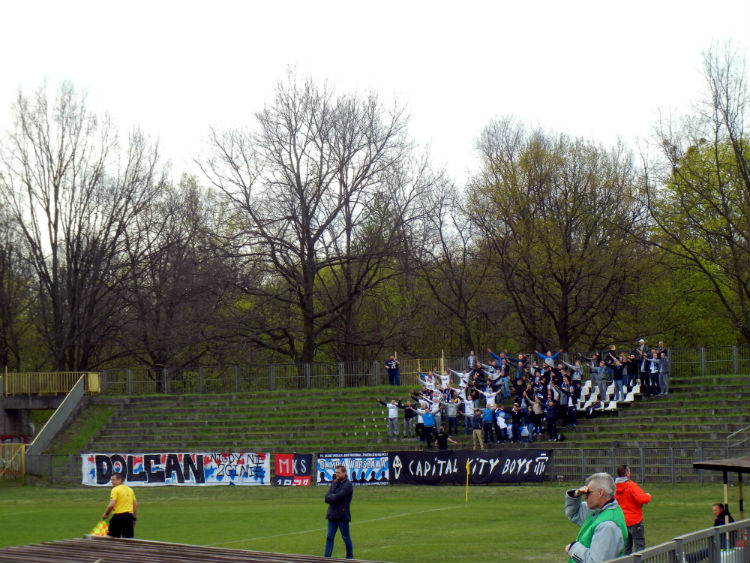 Final score: 1-0 to Hutnik. The football might have been ragged, but it’s been a day to remember – further, it’s an honest antidote to the standardized experience fans are more used to.