“We don’t want to be just another tap bar,” says manager Marcin Chmielarz, “we want to the best tap bar.” Big words, but the early signs suggest there’s plenty of substance to Jabeerwocky. Take the design, a great combo of restored 100-year-old floor tiles and the kind of bricks and plaster looks that works so well in a boozy, beery environment.

Ah yes, the beers: that’s 15 taps, two cask ales and a fridge that’s filled to the gunnels with exotic offers from Europe’s boutique breweries – it’s a shame, therefore, that to see what’s actually in the fridge means scaling the bar. Even so, you get the sense of a tap bar that’s trying to do something different: for instance, here’s a place that remembers that some beer drinkers like sports! To meet that end, they’ve only gone and got a great big projector. Nice one lads. There’s food, too, though in fairness a few people haven’t been shy about voicing their displeasure regarding the zł. 20 price tags ascribed to the hot dogs. 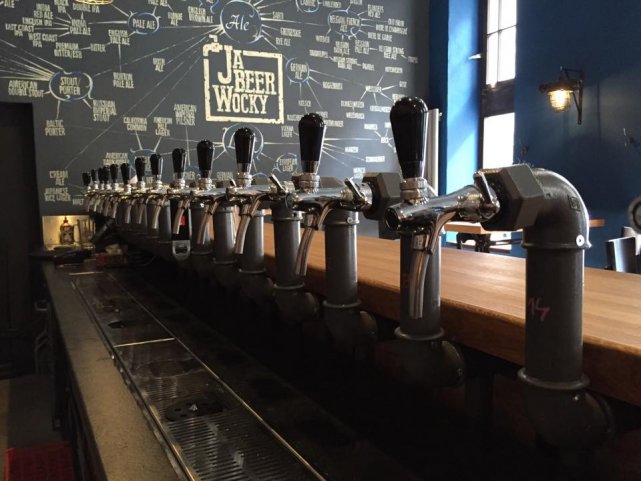 There are flaws and foibles (e.g., an online beer menu that isn’t always updated), but Jabeerwocky is still very much a work in progress: Part II, a smaller, more ‘refined’ space is set to open in the neighboring tenement in the near future. Other improvements and initiatives are in the pipeline. In the meantime, well, it’s been a pretty special start.