A story of hope, heroism and, ultimately, tragedy, the Insider follows the trail of esteemed pedagogue Dr. Janusz Korczak.
By Stuart DOWELL

I first learned the story of Janusz Korczak during a performance by a visiting youth theatre from Plymouth at the Jewish theatre on Plac Grzybowski. I was shocked by these English boy’s convincing performances of swaggering Nazi officers and moved by Korczak’s life in Warsaw and the tragic march with his children to Umschlagplatz and onward to their deaths at Treblinka.

Doctor Korczak, who became one of Warsaw’s most distinguished citizens through his work as a paediatrician, educator, children’s writer and broadcaster, was associated with city his whole life. On a recent bicycle tour of Korczak’s Warsaw organized by the Jewish Historical Institute, I had the chance to learn more about the life and death of the ‘King of Children’. 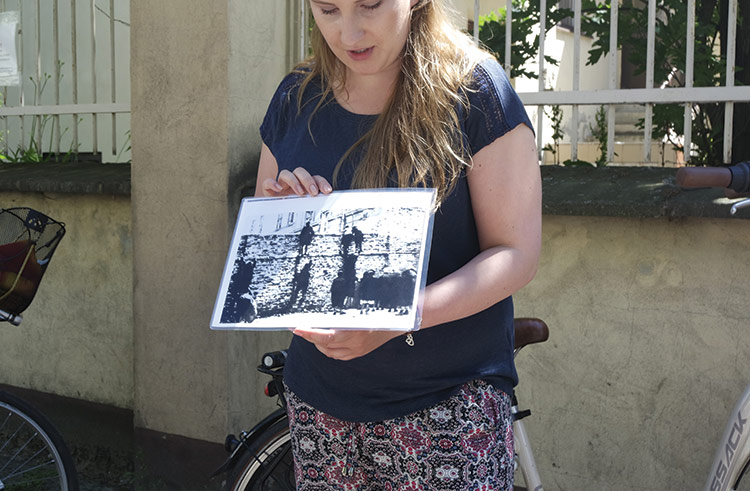 Korczak’s early years were spent in the Old Town, where our tour starts. Born into a Jewish family as Henryk Goldszmit on 22 July in either 1878 or 1879, his father was an eminent lawyer and the family lived comfortably, first at Bielańska 18 (not existing today), and later on Krakowskie Przedmiście, Miodowa and Plac Krasińskich. Korczak’s father suffered from a mental disorder (possibly brought on by syphilis) and the family’s fortunes plunged. He moved to ul. Leszno (now Al. Solidarności) with his mother, who started to take in lodgers and the young Korczak gave private classes.

After qualifying as a doctor in 1905, Korczak started work at the Bersohn and Bauman Jewish children’s hospital near today’s Rondo ONZ at Śliska 51, which stands today and still operates as a hospital. It was a formative time for the young doctor. He lived at the hospital and worked tirelessly for the poor and needy. Trips to Berlin and Paris deepened his medical knowledge, and on a trip to London in 1911 to visit children’s homes he came to the decision not to start his own family but instead to devote his entire life to his work for children.

Our journey takes us out to Wola now. In 1912, Korczak became the director of Dom Sierot, an orphanage that he designed himself for Jewish children. Today, the building still operates as a children’s home and a bust of Korczak stands in the grounds in front of the building. 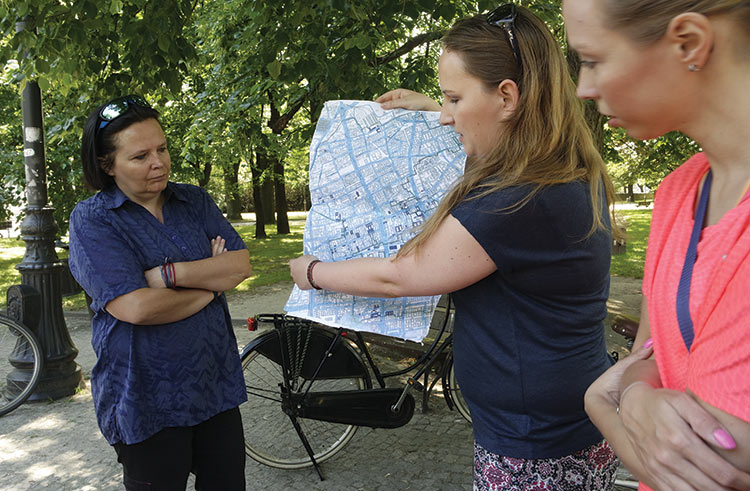 Korczak developed the Declaration of Children’s Rights long before the idea was conceived by the United Nations. The home operated as a kind of mini-republic of children. It had its own parliament, court and newspaper, all operated by children. He believed in the emancipation of children and that their rights should be respected. This way of thinking about children was revolutionary.

Mały Przegląd was the first newspaper published for and by children. It was a forum for topics of interest to children, a crucible for their talents and a method of assimilation, especially for children that had come to the orphanage from orthodox backgrounds. Through his work in these years, Korczak was an unparalleled innovator and one of the father’s of modern childcare.

From the start of the German occupation, Korczak was at the orphanage day and night. His overriding objective was to maintain the children’s daily routine amid the gathering storm clouds. He managed to take the children for a summer camp to Wawer in summer 1940, but in autumn that year he was forced to move them to a school building on Chłodna (not existing today) within the ghetto boundaries.

With failing health, Korczak’s days were spent wandering the ghetto appealing for assistance and bargaining for food for around 200 hungry mouths. He was arrested for a short time by the German police for not wearing an armband marked with the Star of David and spent several months in Pawiak.

In October 1941, the orphanage was forced to move, again to Śliska but to a part of the street that has completely disappeared and is now covered by Park Świętokrzyski to the north of the Palace of Culture. An impressive and moving statue of Korczak embracing his children protectively stands in the park and is a highlight of the tour. 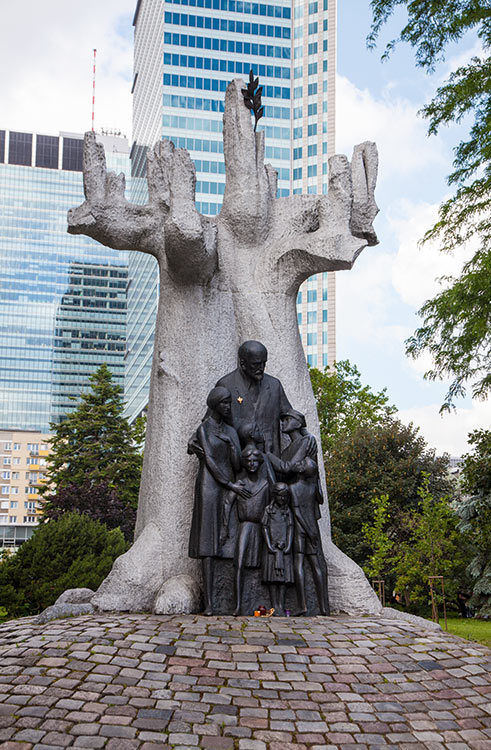 In 1942, Korczak began to write his Ghetto Diary, a scrupulously observed testimony of the barbarous conditions inside the ghetto. In it, he captured the unreality of the struggle for survival in the ghetto. A shopkeeper’s rebuttal of a customer’s complaint is a telling example: “My good woman, these are not goods, and this is not a store, you are not a customer, nor I a vendor. I don’t sell to you, nor do you pay me, because these scraps of paper are not money. You don’t lose, and I don’t profit. Who would bother to cheat nowadays, for what? Only one’s got to do something. Well, am I not right?”

To go from the Korczak statue to the Umschlagplatz memorial on Stawki takes about 10 minutes by bicycle. On August 5, 1942, the date appointed by the Germans for the children’s journey to their place of extermination at Treblinka, it took Korczak and his group of around 200 children seven hours in blistering heat. 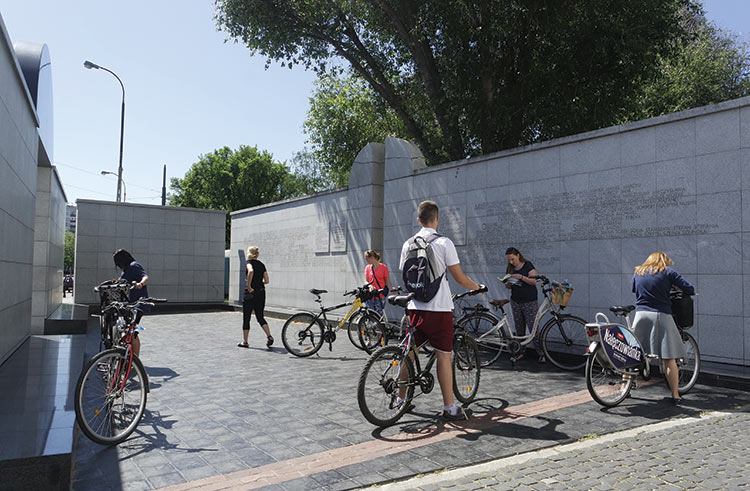 In this final march towards death, Korczak led his charges with each dressed in their best clothes and holding small blue bundles. Some accounts speak of Korczak marching proudly at the front of the column, holding a small boy in his arms and singing songs. Others describe the group as looking exhausted, sick, hungry and tormented by their German escort.

Korczak was given the chance to save himself by escaping the ghetto. He refused. It’s uncertain whether he knew he was leading his children to a death camp. People at the time talked of “resettlement in the east”. Had he known the truth, I believe his resolve to stay with his children to their final moments in a gas chamber or leaning over a ditch would have been even stronger. The Old Doctor is remembered for his tragic death, yet the example he set through his life and work make him one of Warsaw’s most distinguished sons.