So, who doesn’t like crossing a little metal bridge to get to a pub? Personally, I love it, more so when it leads to a Belgian pub. Yup, you wait for X amount of years for a Belgian pub to open and then two appear out of nowhere. Hot on the heels of Delirium in New Town, Jedna Trzecia arrives just in time for spring: drinking season.

If the design is industrial – breeze blocks and chipboard – then it doesn’t really reflect on the overall feel: cool, yellowish lighting and an audience that’s overwhelmingly female see to that. Really, in two visits the girls have outnumbered the lads by a ratio of 2:1. In all my years in Warsaw, that’s definitely a first. 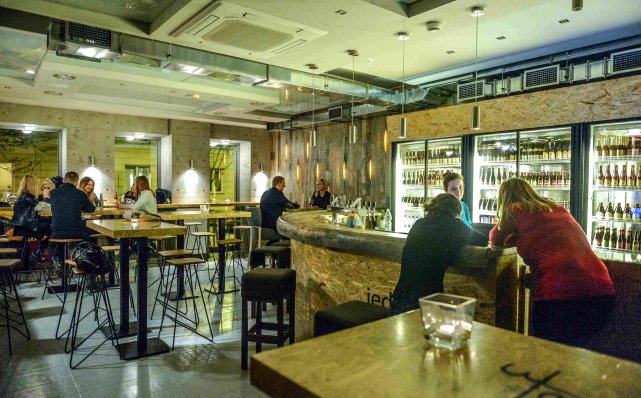 Not that I care, the best news here is a selection of 70 beers or so in the fridge(s), and about seven or so taps. True, on both visits over half of the taps have been out of action, but I’m not going to pull hairs on that. Not when there’s St. Feuillen Grand Cru in the fridge. Polish artisan beer has made grand, quick advances, but come on, the Belgians will always do it better. Here’s the proof. One beer geek website describes it as ‘a symphony of aromas and flavors,’ another as ‘a masterpiece’. Myself: it’s just jeffing great.

And it will get better. Over the next couple of weeks expect this lot to be rounding out their local presence by opening a restaurant around the corner in what was once Ganesh. Bring me the World Cup and I’ll be their customer for life.