art98 interview10 murals7 public art29
WI: Even people with next to no affinity with the arts love your work – what’s the secret? TB: Firstly, I’m really pleased to...

Regarded as one of Poland's favorite contemporary painters, Tytus Brzozowski talks about both his work and his latest exhibition...

WI: Even people with next to no affinity with the arts love your work – what’s the secret?
TB: Firstly, I’m really pleased to hear that! I’ve always wanted my paintings to work on two levels – first, for people to simply enjoy them. On that front, I think it’s helpful that they’re colorful, intense, and present cheerful scenes. Secondly, I’ve always wanted them to have a more hidden and substantive value that creates a wider story. That concept appears to work. 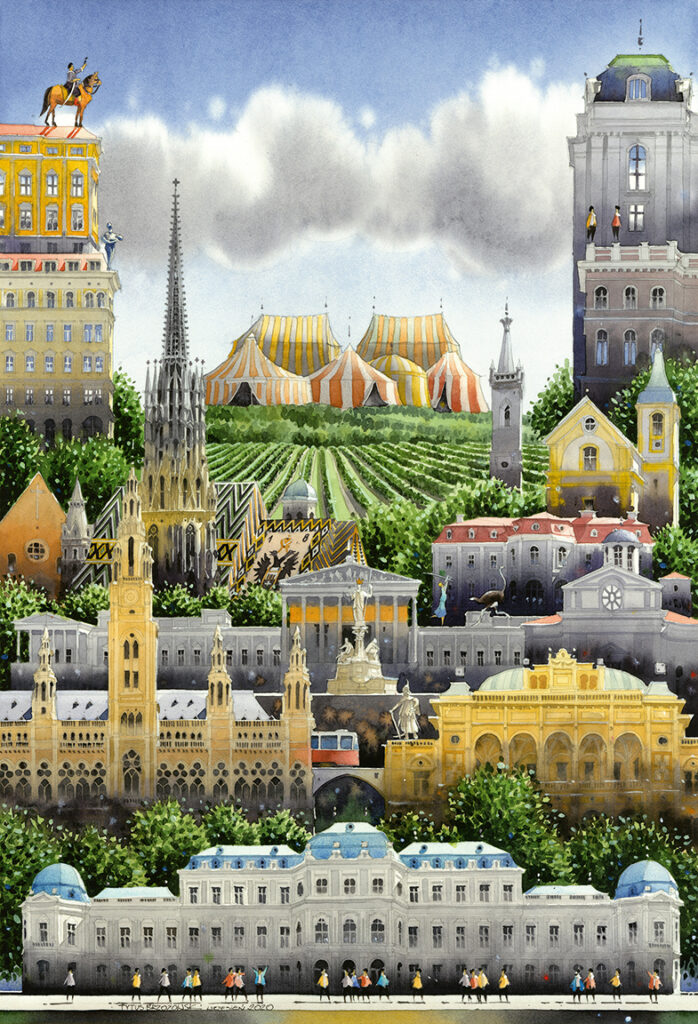 When did you first ‘find’ your style?
Throughout my studies I had the thought to transform the urban spaces depicted in my architectural drawings in accordance with my own imagination.

I took a step closer to this in 2009 when I painted a giant spider standing in between buildings; at the time, I was captivated by the idea of a seemingly harmonious scene disrupted by such a large and surreal element. Two-years later I painted a picture of teapots floating above Warsaw’s Old Town and something just changed inside me.

Since then, I’ve been painting continuously, adding in things like flying tenements, pianos or trams running in between buildings. 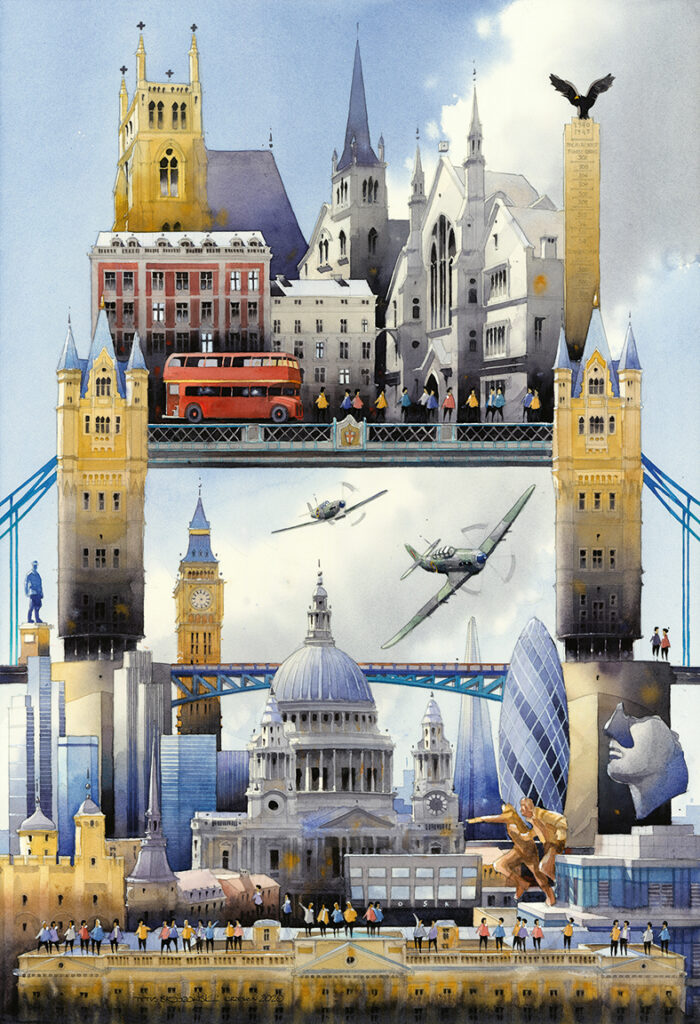 How have you developed your style?
Over the years the topics I deal with have evolved. Moreover, I’m constantly working on improving my painting technique. I’ve enriched my color palette, and whilst my paintings have retained the same kind of atmosphere, you can easily distinguish my newer works from my older ones. 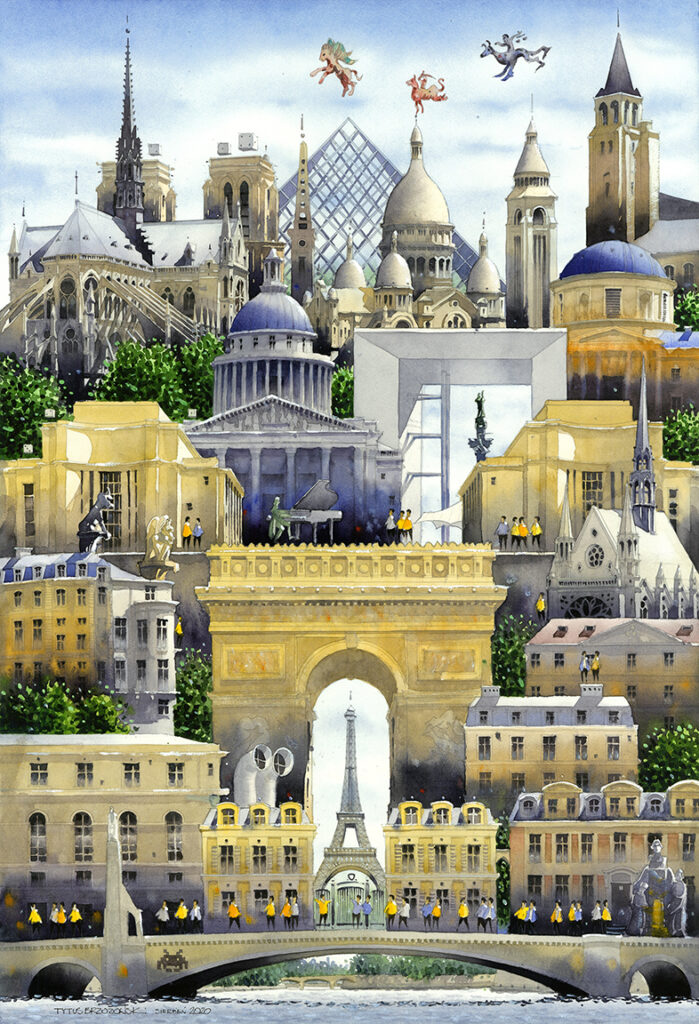 What’s does your painting process involve?
It all starts with hundreds of quick sketches which I imagine would be pretty incomprehensible to most people. They’re like my own secret language and I use these to work through an idea and figure out the composition. 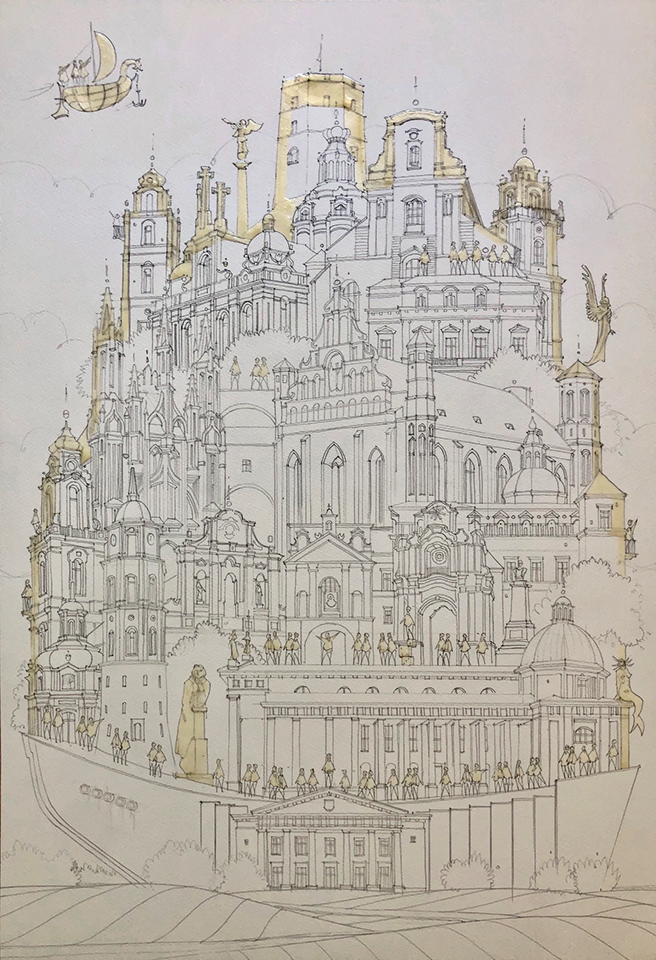 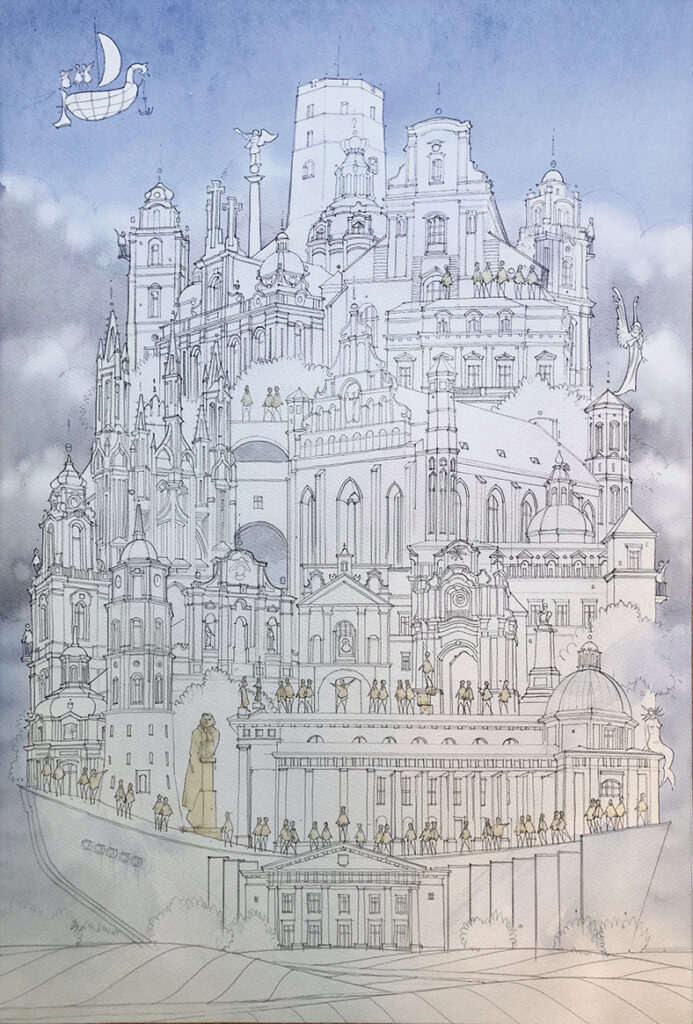 After, I prepare a final black and white drawing on A4 – from that moment, the layout of the buildings or the shading won’t change. 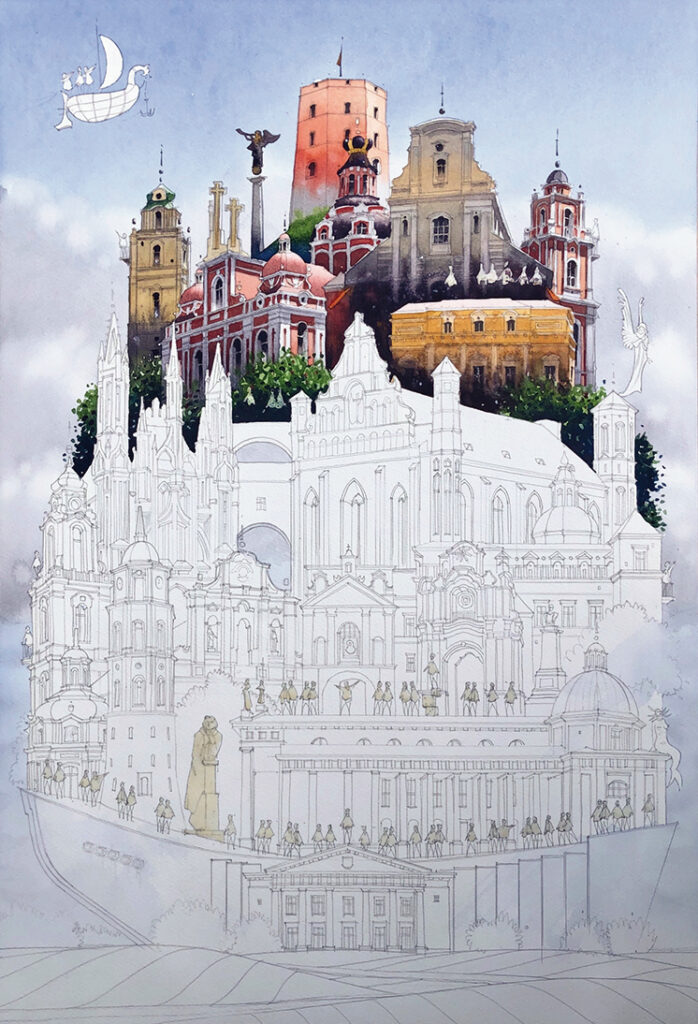 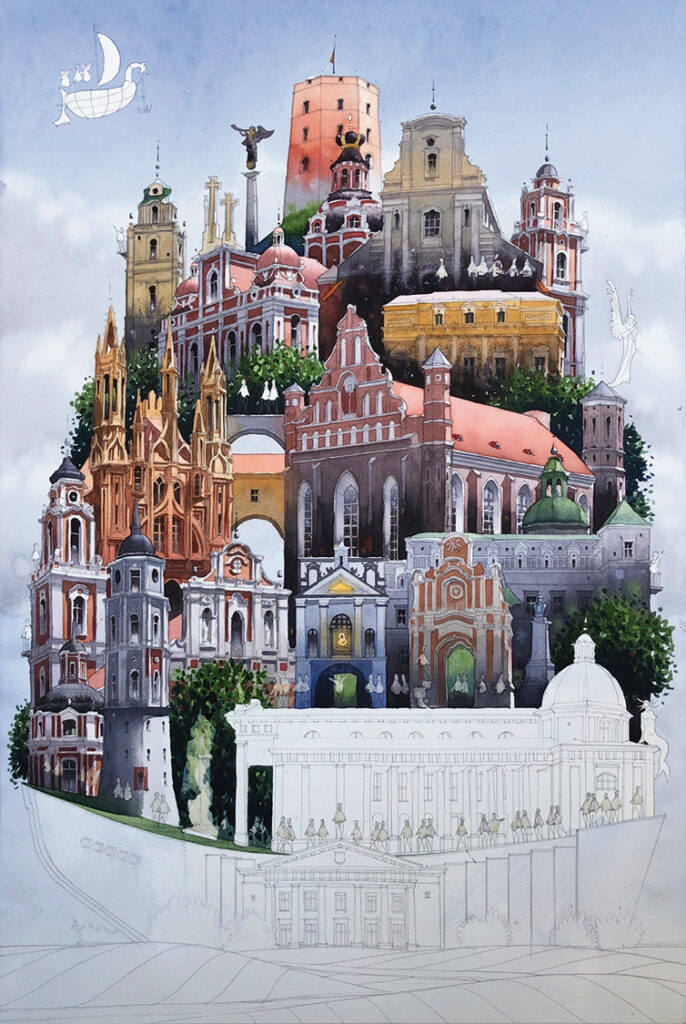 Next, I prepare the drawing on a final, large sheet of paper. I use hard pencil, so it’s quite a laborious process. The final stage is the most important – and also the most satisfying – and involves adding the colors. 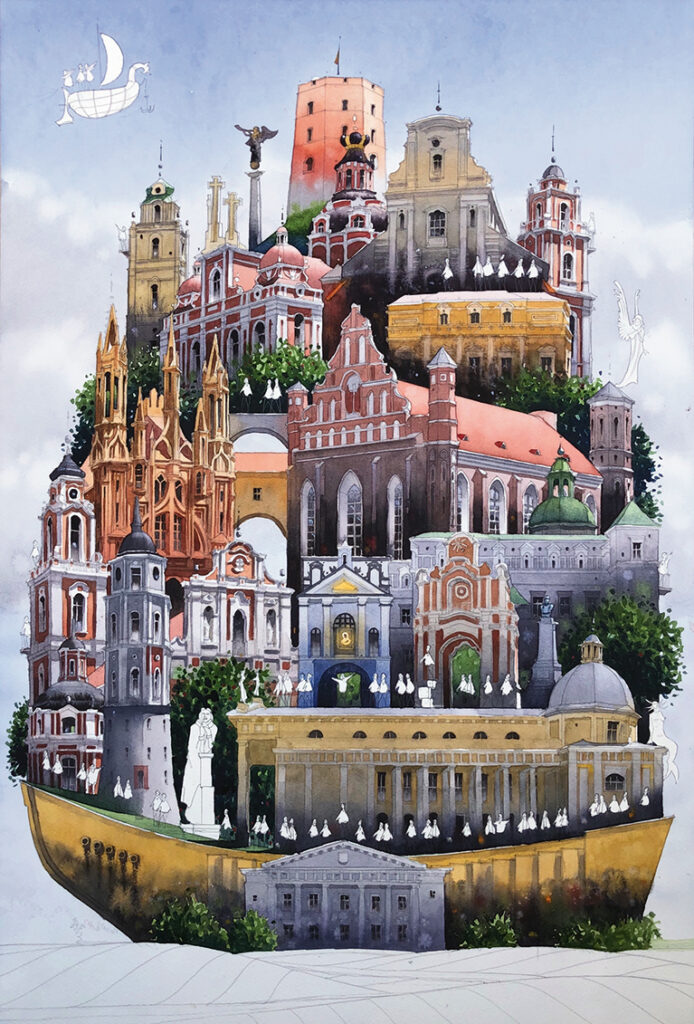 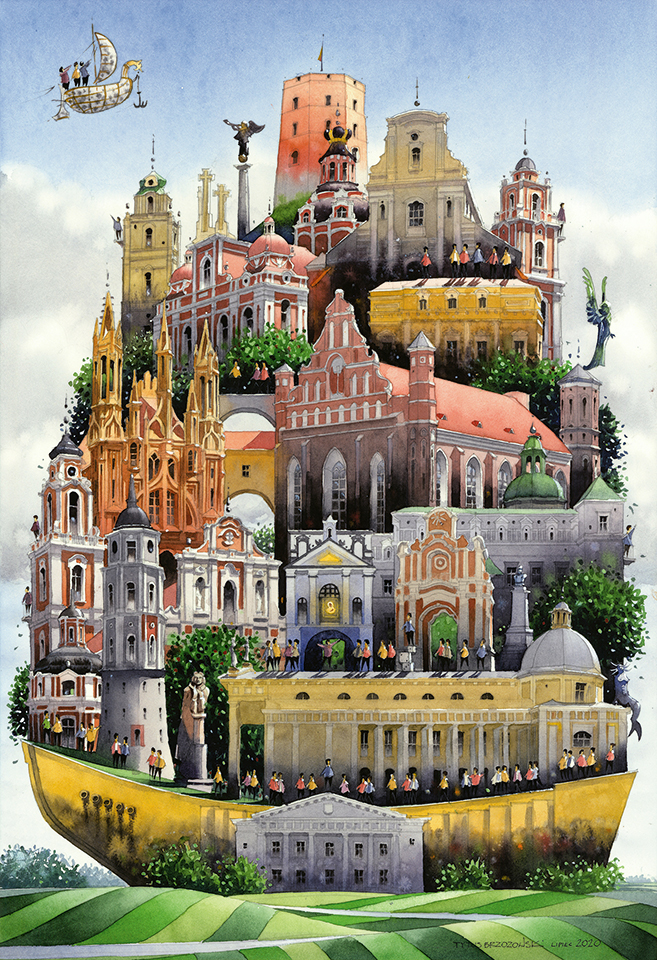 Your latest exhibition is the result of your cooperation with Instytut Polonika during which you painted 12 international cityscapes and referenced their Polish connections. Can you expand on these a little?
For instance, in the painting of Paris I’ve introduced the figure of Paul Landowski – a sculptor whose most famous work is Christ the Redeemer in Rio.

For Dresden, I chose to recall traces of the former Polish-Saxon personal union, whilst for Lviv I lifted the buildings into the clouds to show how dearly Poles continue to hold this city in their hearts. 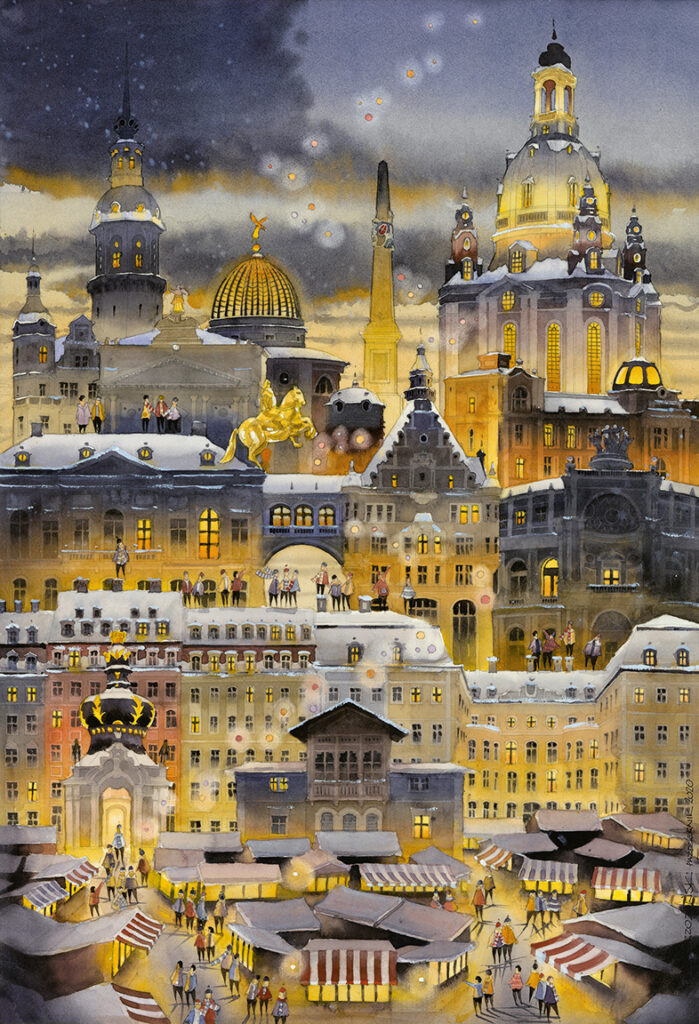 Any surprises in the course of your research?
It was a big and serious project; as part of it, I visited many new cities and also discovered lots of new things about places I already thought I was familiar with. Before preparing each painting I’d meet the institute’s team for hours so I could learn as much as possible about the cities and their Polish elements.

In Dresden, for example, I learned that Bernardo Bellotto (a.k.a. Canaletto) – whose paintings of Warsaw remain so famous – only ended up in the city after King Stanisław August Poniatowski stopped him on his way to St. Petersburg.

I also learned about a Polish spy by the name of Kulczycki. As a reward for his work, he asked King Sobieski for the sacks of strange grains that the King had seized. These turned out to be coffee beans and it was with these that Kulczyki opened Vienna’s first coffee shop. 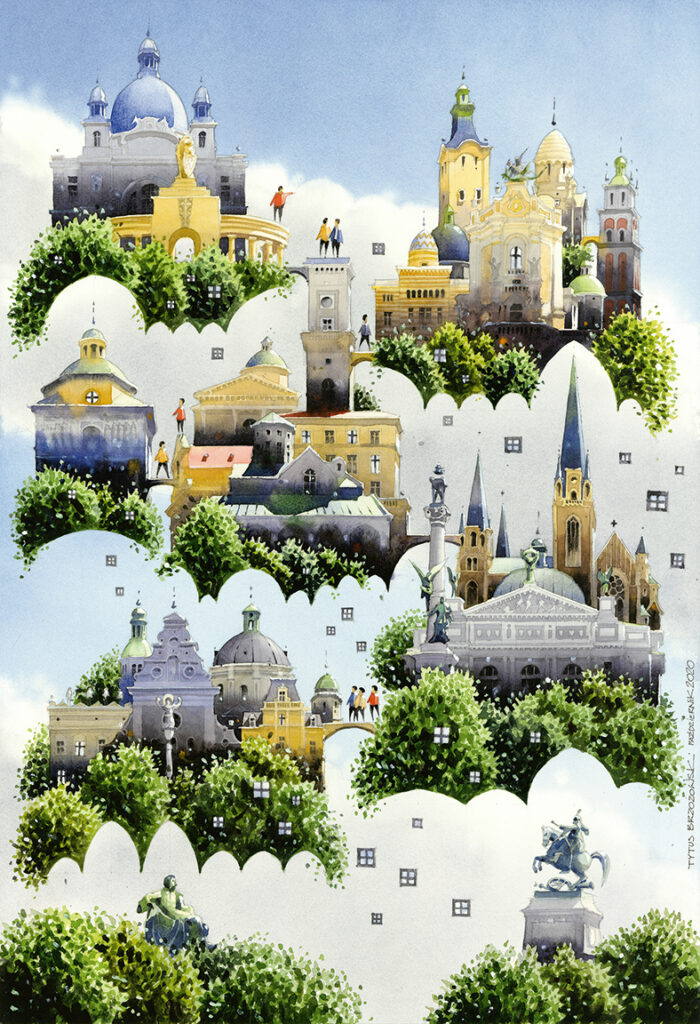 We can’t avoid mentioning your murals and the one by Wschodnia station is arguably the best to date! Anything we should know?
It’s of particular importance to me due to its sheer scale – it’s over 60-meters in height. It’s definitely an interesting feeling seeing such a large mural peering over the roofs of the surrounding tenements. It’s worth mentioning, as well, that it was painted using anti-smog paint that decomposes nitrogen oxide – the mural has the effect of 650 trees. 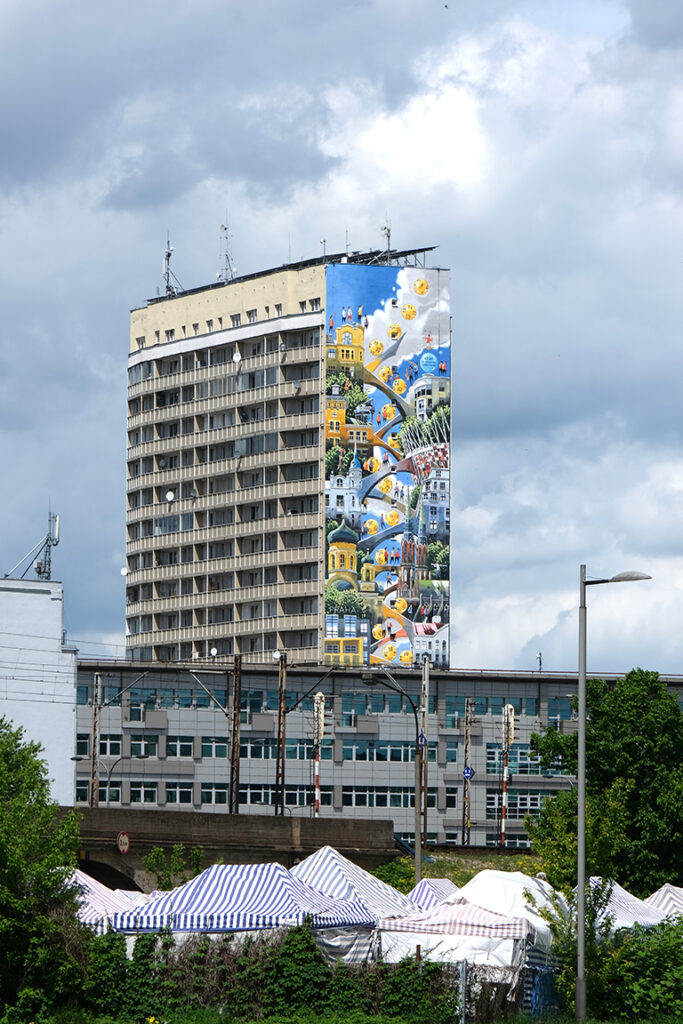 While we’ve got you, explain the lotto balls that appear in the mural!
The mural was designed on the request of Totalizator Sportowy – this was one of their ways of celebrating the firm’s 65th birthday. That’s why their signature yellow lotto balls appear, and also why you’ll find a basketball and badminton player, a footballer and a pianist in the mix – those are all pursuits supported by the brand. 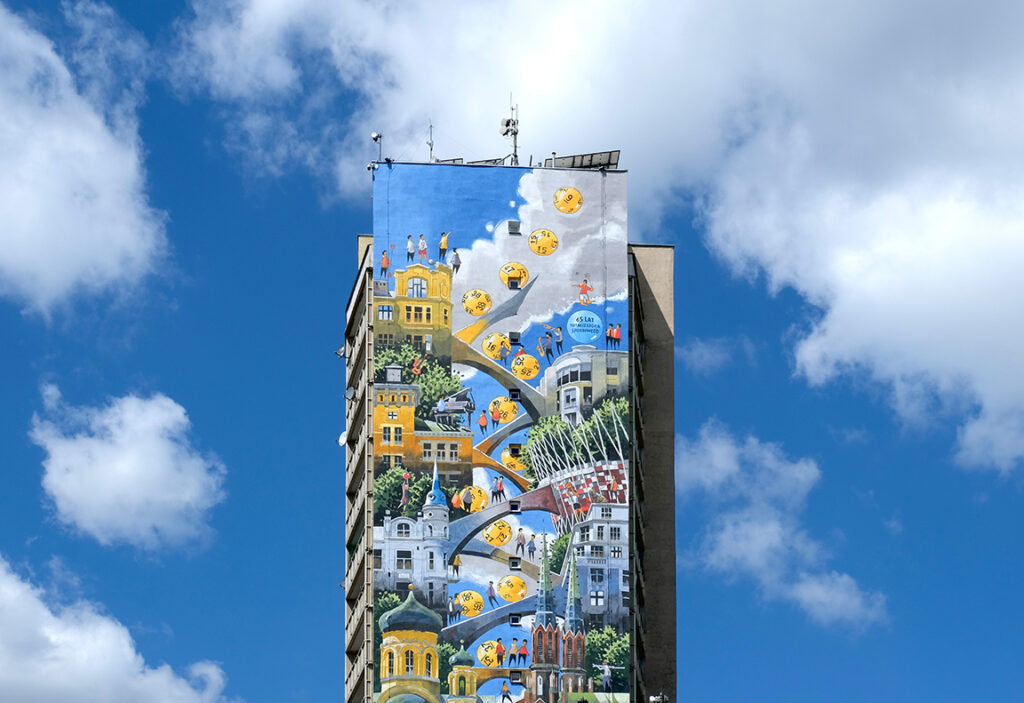 Finally, what next…
I’ve got some murals due for Wola, with one of them very different from previous projects because it’ll take up three walls – furthermore, I had to integrate a window into the image which was quite a challenge.

As for the exhibition, when that closes in Warsaw on July 13th we’re going to tour the world with the paintings: shows are planned in Chicago, London, Vilnius, St. Petersburg, Lviv and Rapperswill. I’m hopeful that we’ll prepare a mural based on the series in one of these cities.