So, by my reckoning we’re in Week 107 – Week 107 of Warsaw being considered a proper foodie city. Don’t know about you, but I’d almost forgotten about the time when chefs were normal – when they weren’t deities and their food wasn’t some organic, cosmic dust. But, yeah, there really was a time when restaurants were just a means to an end and I found myself reminded of this during a recent jaunt to Old Town.

For whatever reason – sentimentality being the most prominent – I found myself walking into Kompania Piwna, a place I’ve not visited for several years. In fact, and I say this seriously, I think the last time I visited it was considered quite trendy. Don’t believe me? Well how about this: it was 2003 or something, and there was me sitting on my own in their courtyard when some swaggering idiot I vaguely recognized off Big Brother came sauntering over and demanded I kiss his hand and gift him a cigarette (this brief brush with fame ended swiftly when I told him to p*ss off). I’ve not returned since. 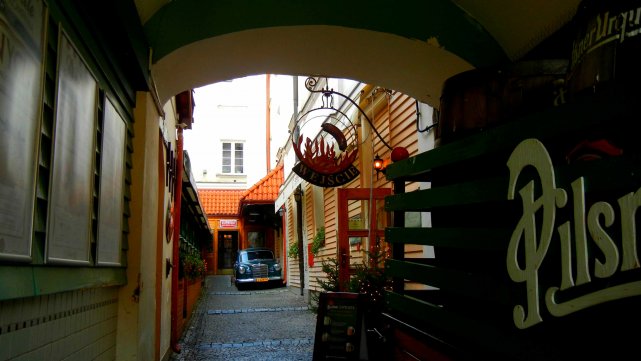 Since then much water has passed under the bridge, and I entered Kompania pretty safe that it would be bereft of television luminaries. As chance would have it, it was bereft of pretty much anyone. Taking our seats, I was pleased to note it had remained exactly as I remembered: an exterior evoking a Mitteleuropa square and interiors resembling a battered Czech beer hall. Even the waiter – a gruff bloke you’d imagine more comfortable with smashing tables than serving them – seemed familiar.

For all that, my most lucid memory of Kompania concerns the food: schnitzels the size of bus tyres and steaks that looked like house bricks. Eating here was a case of get stuffed or die trying. In fact, now I come to think of it, it wasn’t the chance of running into snerking, cut-price celebrities that put me off going, it was the prospect of dislocating my jaw every time I wanted a bite.

With this in mind we skirted starters altogether, only to find ourselves presented with a complimentary mountain of cabbage and a selection of gherkins the size of torpedoes. Clearly, the chef takes his duty to fatten up diners really quite seriously. Onto mains, and for the Mrs it was a steaming pot of fresh mussels – a youth spent in Belgium has made her something of an expert on these, so I awaited her verdict with bated breath. Surprisingly somewhat, she awarded them a ringing endorsement, with the only criticism reserved for the bread – “you’d get this in a cheap supermarket.” 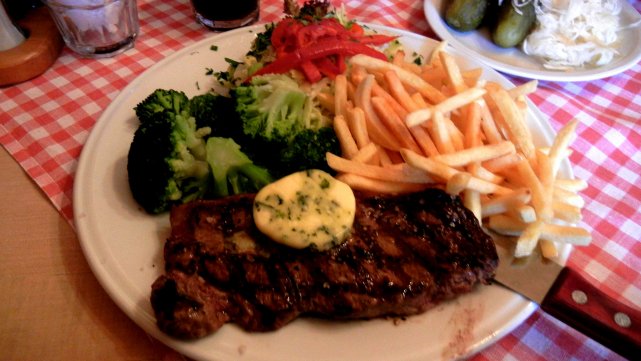 For me, it was the Argentinean beef served with herb butter, limp French fries and as many steamed greens the chefs could find. I hated it. The beef was all knots and sinew, a point made more emphatic by the lack of condiments with which to disguise this. “Any sauce mate,” I asked the waiter. I sought some green pepper sauce, hell, even ketchup would do. The look I received suggested I better button it or get smacked in the face. So I sat there, gloomily breaking my teeth as I chewed through the rubbery mass that sat right before me.

Exclusively on the back of this trip I’d say the food goes from 3/10 up to 7 (being generous), yet for all that, I actually enjoyed the experience in a perverse sort of way. It was a glimpse of what Warsaw was once like, and I found myself genuinely appreciating this trip back in time. At a time when Warsaw restaurants copy tables, fittings, menus (even menu fonts) from each other, it was nice to return to a time more innocent (a time when waiters wanted war not a tip). But with its Old Town location and sense of tradition, it promises a fond journey back to a distant time – providing the standard of food isn’t a prerequisite of yours when choosing a venue, you might even go as far as to say it’s an essential stop on the tourist trail of Old Town.