It’s certainly not easy, but, like any European language, Polish can be learned. But how? Why is it said to be so difficult? And is it worth learning? 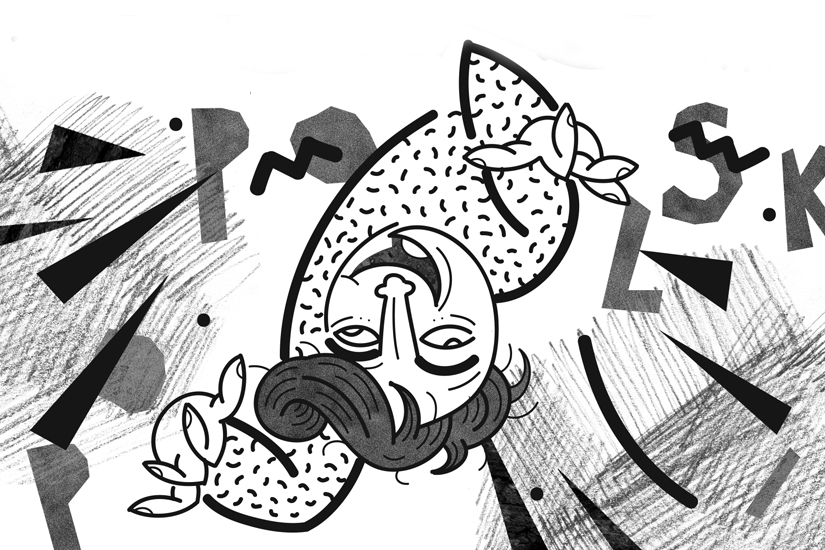 When I arrived in Warsaw, English seemed to me a brutish tongue, spoken with grim determination by Poles as if it were the oxygen not so much of economic opportunity but of survival in the post-transformation chaos. Polish, on the other hand, danced an exquisite ballet, buzzing and hissing in melancholic beauty. Warsaw appeared to me as a real-life crossword puzzle; like in a Hollywood movie, language conundrums jumped out of billboards and shop signs, challenging me to break their secret code.
I enjoy telling Poles that back home in England we say that the Poles are the most intelligent people in Europe. Why, they ask. Because you speak Polish! The beam of pride that this white lie always evokes reflects the fact that Poles themselves know that their language is jolly difficult. In fact, it is said that children don’t become fluent until they are 16 years old.

But why is it so difficult? There are three main reasons: cases, cases and, well… cases. There are seven all together and their application means that each noun and adjective has to change its ending according to how it is used. This system of declensions is multiplied by the three main genders: male, female and neuter, as well as the male animate and male virile genders that are often a tough concept for foreigners to grasp. All this means that there are at least seventeen ways to say the number two in Polish!
Some people say that comparing the complexity of Polish to other European languages is like comparing Classic Greek to Modern Greek. Indeed, the Czechs started simplifying their case system about a thousand years ago. On the other hand, Polish compares favourably with Finnish and Hungarian, which have around 20 cases each.

One thing to be thankful for, though, is that Polish is written in the Roman alphabet, a result of Poland’s adoption of Roman Catholicism. The downside is that this created the awkward and baffling consonant clusters, which we can see in the famous tongue twister ‘W Szczebrzeszynie chrząszcz brzmi w trzcinie’. Saint Cyril was definitely on to something when he came up with his Cyrillic alphabet, as it is perfectly designed for Slavic languages.

If Polish words seem alien and impenetrable, you can take comfort from the fact that there are very few uniquely Polish words. All Europeans share many words that come from Proto-Indo-European, which was spoken as far back as 2000 BC across an area stretching from Portugal to India. Take the word for house in Polish, dom, and compare it to the English words dom-estic and dom-icile and the connection should be clear. The Latin word castellum obviously gives us castle in English, but after leaving Rome it met up with some Germanics and became kasztel, took a quick detour in Czech where it changed to kostel and then popped up in Polish as the word for church – kościół. As you grow your vocabulary, connections and relationships with words you already know appear more frequently.

Ok, so it’s clear that Polish isn’t the easiest language to learn, but it is still well within the capabilities of most people to do so. After all, a humble Yorkshire man such as myself managed to, so why not you. If the complicated grammar puts you off, think about it this way: all of the concepts in Polish grammar are easy to understand; there are just a lot of them. To master Polish grammar you just have to learn a few hundred grammar facts. It sounds daunting, but think about it: most people have vast databases of facts in their heads about things like sport and music, so why not Polish grammar?

But where to get these facts from and how to consolidate them? Unfortunately, for people who have non-Slavic mother tongues, it’s going to be difficult to just absorb the language by hearing it spoken around you. That means you’re going to have to study books. My advice would be to buy any Polish for beginners book with lots of exercises – Colloquial Polish and Teach Yourself Polish are good ones – and work through it completing all the exercises. Then go and get another book for beginners and do the same and simply keep going until there are no more beginners books in the shop.

You might hear the opinion that you don’t have to worry too much about grammar because Poles will understand what you are saying without it. But with something as exquisite and delightful as the Polish language, wouldn’t you prefer to sound like a Chopin nocturne rather than a cheap drunk on the piano hitting all the wrong notes?

The main advantage for Warsaw-based Polish learners is that the language is all around us. This creates plenty of interesting opportunities for real life practice. Of course, you can just approach people in the street and ask them questions, but there are all sorts of people who are paid to sit patiently and talk to you for free. One of my favourite situations used to be discussing holiday options with travel agents. Other good places include museums, galleries and any shop that sells stuff that you’re interested in, whether it be camera equipment or handmade soap. Be careful though. I remember practicing the use of the genitive with words of foreign origin when I wanted to buy the computer magazine Chip. I received a very disapproving look when I asked the kiosk lady “Czy ma Pani może Chip’a”! (if you need that clarified, ask someone familiar with bawdy language).
A frequent question is how long will it take to become reasonably fluent? That’s a tough one to answer. I’ve been studying Polish for close to 20 years and often have the impression that I’ve only scratched the surface of the language. Indeed, as Isaac Bashevis Singer said: “Our knowledge is an island in a great ocean of ignorance”. However, if studying Polish becomes a daily habit, even a foreign-language adverse Brit, as I was, should reach a reasonable level of fluency within 2-3 years. The main thing is not to waste time and just get stuck in – do roboty!