Life is Piękna (and a little bit Koszykowa)

The Insider takes a prowl to explore the stories surrounding the sultry streets of Piękna and Koszykowa.

Sashaying grandly from one end of the center to the other, Piękna street is, in parts, just that – beautiful. Laid out in 1771 to form part of a street plan known as the King Stanisław Axis it’s lavishly sprinkled with pre-war palaces, Cold War monstrosities and vibrant bursts of parkland and greenery. In short, it offers a snapshot of everything you may love (and hate) about the Polish capital… 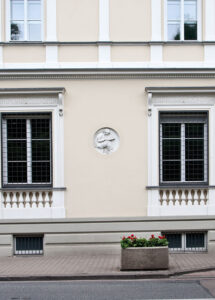 The fluttering flags and heavy police presence give the game away: the eastern section of Piękna falls slap bang in the middle of the diplomatic quarter. The embassies that proliferate the district are very much a pick-and-mix assortment of the good, the bad and the ugly, and sometimes, remarkably, a combination of all three. For example, take the French Embassy on Piękna 1. What is it: an upturned milk crate? A giant, plastic space toy from the Buck Rogers age? Or a stroke of architectural genius? Either way, construction on this beauty / beast began in 1971 after General de Gaulle laid the foundation stone, with a comprehensive update in 2004 bequeathing the embassy its current look. Strangely beguiling, it’s a source of genuine fascination that leaves passers-by pondering just what Austin Powers weirdness lies inside.

Opened in 2001, the nearby Canadian Embassy was voted Warsaw’s ‘Best Public Building’ the following year, and has been cited numerous times for architectural awards. Aiming to convey Canadian values of ‘transparency and openness’, quirky features of this complex include landscaped gardens filled with rocks and plant life from across the ocean. For those stuck on the other side of the fence, content yourself by browsing the changing placards that promote Canada’s achievements: at press time that meant a charmingly idiosyncratic rundown of the nation’s 21st century innovations (fatigue measuring watches, soundproof tents and something called a boulder buster!).

Then, on the corner of Ujazdowski and Piękna sits the home of Switzerland’s diplomatic mission. Built in 1865 under the direction of Leandro Marconi, it was the aspiring architect’s first major project, and helped launch a glittering career that would later see him design the Great Synagogue. Destroyed during the 1944 Warsaw Uprising, this ornate palace was restored soon after the war thanks to the joint efforts of Simon Syrkus and Hans Schmidt. Gazing at this masterpiece it’s easy to picture black-tie balls and immaculate butlers carrying towers of Ferrero Roche.

The U.S Embassy next door acts as a wake-up call. Conspicuous by its catastrophic hideousness, it’s a piece of Mordor that causes pedestrians to quicken their pace lest some spooks burst out and bundle you in. As if you needed telling, thoughtful signs remind the public that guns and photography are strictly forbidden. The thing is, it could have been so different. The Czetwertyński Palace which stood on this spot limped out of the war in half-decent shape, and was rented out after by its legitimate owners to Polish Radio. However, in a twist of irony the Czetwertyński family were accused of spying (for, yes, the US) and arrested. While incarcerated their property was confiscated and sold by the state to the American government, who proceeded to knock the building down and build a spy-proof fortress in the early 1960s. Scary, intimidating and much, much more, it’s a blunt reminder of Cold War intrigues. 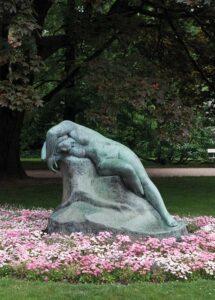 How often have you heard a district described as being ‘a city within a city.’ It’s a tired expression, exhausted and overused. But Warsaw has something different, something better: a village within a city. Tucked behind the French Embassy lies an idyllic little secret dubbed The Finnish Houses. Set amid tree-lined tracks lies a collection of timber cabins hidden from the world. Walking around them is akin to entering a small, magic world: the smell of wood-fired stoves wafts gently in the air, squirrels dart from tree to tree and the only sounds are the tweets of the birds.

Built in 1945 to house the architects and engineers recruited to rebuild Warsaw, the materials for the cottages were imported from Finland and originally meant as just a temporary measure. Seventy years on and they’re still here… By the skin of their teeth. Originally consisting of over 200 houses, the vast majority have been knocked down to make way for new embassies and faceless developments. But for all the encroachment of the modern world, some have doggedly survived and together they form a completely unique community. Slated for demolition not long back, a campaign to save them has handed them a lifeline.

While meandering around this serene sanctuary you may find yourself on ul. Lennona. What’s that all about? So the story goes, on the first anniversary of  John Lennon’s death, the artistically inclined residents of The Finnish Houses staged an impromptu celebration of his life by marching down the street singing Give Peace A Chance. Ten years later the street was renamed in honor of him, and today has something that some might describe as a shrine to the Beatle: a couple of photos pinned to the fence and the occasional memorial candle glimmering in the night.

Further on, Park Ujazdowski cannot be missed. Enter from Piękna and you so seen why. Having been greeted by a monument of a saluting gladiator, lose yourself amid gently curving paths that take you past nooks and alcoves filled with curiosities: a statue called Ewa (designed by Edward Witting, a former student of Rodin), a rock pool, and a teeny, tiny bridge whose railings have been embellished with lovelocks. And with dogs forbidden, don’t be surprised to find a few enterprising locals taking their kittens for a walk.

Pressing on, Skwer Batalionu AK Ruczaj fills a triangular space where Mokotowska and Piękna intersect. Once filled with towering tenements, the area was gutted during the Uprising – such was the ferocity of the fighting that two informal ceasefires were arranged to clear the dead bodies. After the war, in a rare triumph for socialist planning, it was decided to turn the area into a memorial park, though even so it faced a new battle in 2011 when plans were mooted to build a skyscraper on the plot. Thankfully, common sense has prevailed. 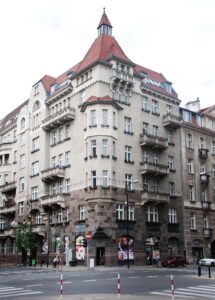 Moving down Piękna and one reaches one of Warsaw’s primary communist stains: pl. Konstytucji. Built in the aftermath of the war to serve as a blueprint ‘propaganda district’ for officials and party favorites, it essentially reinvented the pre-war map and look of the area, replacing tight, teetering tenements with bombastic Stalinist architecture amplified by the addition of reliefs depicting Utopian ideals. For a taste of what came before, nick into Koszykowa 49 where construction crews are busy remodeling one of the few surviving buildings.

In actual fact, many of the architects that went on to reshape post-war (and post-Cold War) Warsaw, learned their trade at the Department of Architecture found at Koszykowa 55. Among these were Arseniusz Romanowicz (who would later design Central train station) and Stefan Kuryłowicz, best known for contemporary works like the Prosta Tower.

Not all of this stretch was wrecked by barmy architects, and a fine example of ‘old Warsaw’ can be admired on the corner of Lwowska and Koszykowa. Completed in 1912, it’s a beautiful ensemble of turrets, towers, balconies and crenellations and, if rumor is to be believed, will house a luxury hotel in the coming years.

Beyond, and let the sound of wrecking balls and swearing builders lead you to what remains of Hala Koszyki at No. 61/63. Only two wings survive of this historic Neo Gothic market hall, with work in full swing to transform the empty gaps into a multi-use residential / retail and office complex.