football16 sport33 weekend132
Saturday mornings have seen a growing band of expats set the alarm clock to turn-out for the most diverse football team in Poland… (Text: Alex...

Saturday mornings have seen a growing band of expats set the alarm clock to turn-out for the most diverse football team in Poland… (Text: Alex Webber | Photos: Ed Wight)

None of the crowd have given me a chance. My teammates don’t have much faith either. The match is in its dying stages, poised on a knife edge, and the opposition striker has just been decapitated by a desperate challenge. Penalty. Dwarfed by the goal, I take up my position between the sticks and await the Exocet that’s due to come screaming towards me any moment now. There’s a breathless hush and then… BANG! I’ve dived the wrong way but the ball blasts off my knee and orbits into space. The whistle peeps and jubilant spectators spill onto the pitch. I’m carried off shoulder high, whoops and hollers echoing all around. I am a hero, the man of the moment.

Unfortunately for me, that moment was in 1994. Twenty-one years on and my football ability has vanished – the only people who are going to be carrying me off nowadays are the Red Cross. It’s 11:10 a.m., and rather than following my standard Saturday routine (bed, curry, back to bed), I’m instead panting around a pitch, chasing shadows and getting entangled with members of my own side. On the occasions I get the ball I send it spinning into touch.

If there is a crumb of comfort then it is that I am not alone. Today’s match has seen numbers swelled by a few of the troglodyte night creatures from the Tortilla Factory’s smoking room, and their leaden touch and late tackles are in perfect sync with my own diminished talents. One lad hasn’t slept, while another is clomping about in outsized trainers borrowed from a friend. Me, I just look like I’m having a medical emergency. Could this really be what Pele called the beautiful game?

But not everyone is a shambles. To my consternation there are just as many players who haven’t lost their touch, and there’s no shortage of deft flicks and raking passes being pinged across the pitch; as I gasp for oxygen on the sideline a daring shot from the halfway line cannons off the crossbar drawing sporting applause from both sets of players. A minute later a silver-haired Dutchman executes a textbook Cruyff turn…

Organized by Aberdeen fan Grant Fisken, the weekly footballing meet-up presents a curious range of skill, fitness levels and general competency. “There’s a mix of ages and talent,” admits the Scotsman, “though we usually manage to balance the teams well to accommodate everyone. Playing on Saturday mornings there are hangover risks and no-shows, but we name and shame them on Facebook to keep that in check!”

Born at the start of the year, the team has grown quickly. “Back in January a few people from the InterNations group tried to organize a game but only eight people turned up,” says Fisken. “Afterwards, a few of us mentioned how we were looking for a regular game so we decided to set up a Facebook group to see if we could do a better job in getting players together.” 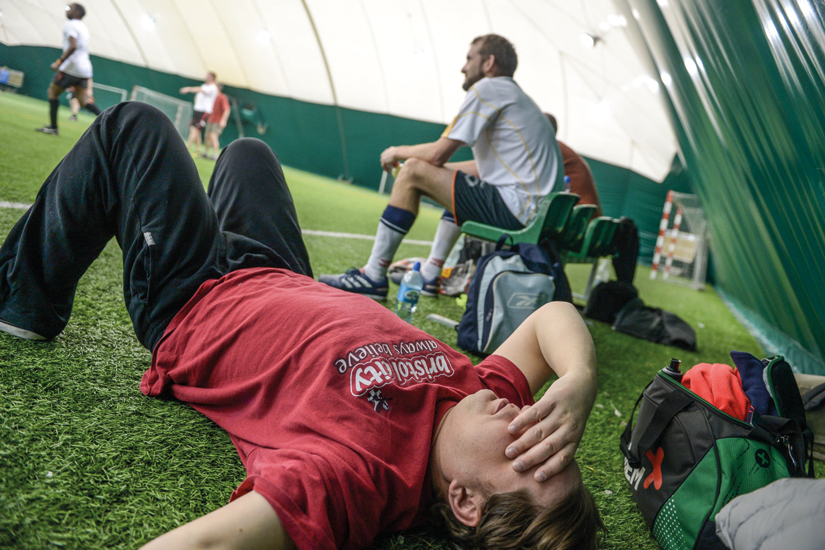 The answer has been a resounding yes. “It started as friends and colleagues,” says Fisken, “but because the group is public on Facebook, random others have found us and joined – it’s amazing how many people are looking for a game of football in Warsaw.” Within two months they’ve hit over 70 members, with usually about 14-20 diehards appearing every week. And a jumbled bunch it is: “regards nationalities,” says Fisken, “take your pick from Britain, Ireland, Poland, Ecuador, Belarus, Nigeria, Chile, Italy…” The list goes on. “It’s great to have so many countries represented,” remarks Fisken, “as they all bring different styles and rivalries to the banter.”

“The games are played in a good spirit,” says the Scot, “though with a definite element of casual competitiveness!” With full-time called the exhausted players troop off to the changing rooms, before retiring to the pub for a post-match analysis that has been known to last as long as twelve hours. Team spirit, it appears, remains the most valued commodity. See for yourself and sign-up on FB at Hobby Kicker – Warsaw.