Here’s the deal, according to Facebook this is a… Tapas Bar & Restaurant. In my opinion, humble as it is, it’s neither. For starters, well, there aren’t any. Arriving on a Tuesday afternoon, I ask for a menu. What is given to me is a heavily pixelated print-out of five or so dishes. Okay. Can I have a drinks menu, I ask. “No, our bar tender is working on it.” So basically, I’m in a place that relies on guesswork.

Out of wild impulse I order Bloody Mary. It’s fine, but that’s about it. For a place that bangs on about ‘craft bar tending’ it’s disappointing – no soothing thickness, no spicy kick. And where’s the Worcester Sauce? If there’s any, then it’s indiscernible. For food, I order steak, medium. The cut is good, the demi-glace equally so. It just feels there’s something missing. It’s all oddly unsatisfying. That applies to the potato gratin, as well. I want it crisp and creamy, yet instead it’s like wax. My girlfriend makes better. 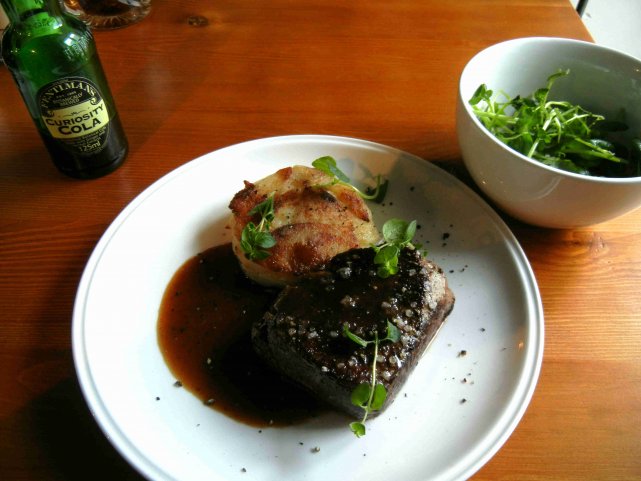 Pushed to give a mark, I’d score the food a six out of ten. But there is something I like about the place though. The atmosphere and design is ace: it reminds me of a (classy) Prague brothel set against a London Soho bar. This, obviously, is good. In terms of creating an atmopshere, they’ve nailed it.

First impressions then: lack of fireworks on the food and drinks. But… but, but, but… So much potential. I can see what they’re trying to do and I can see what they want. This is a very ambitious project and needs time to settle down. Places like this are healthy for Warsaw, I just get the idea they need a little breathing space. Back in four months to see how they’ve settled.