With Valentine’s on the doorstep, and the crackle of Sinatra in the air, the Insider gets in the mood and snoops around Warsaw’s secret vinyl stores.

Vinyl. LP. Long play. 12 inch, 10 inch, 7 inch. It ain’t easy to find them anymore, that’s for sure, even though they used to stack up in our houses and the sound of a crackly record would float through the air. But vinyl has experienced an explosive revival in recent years, what with all the hipsters popping up from nowhere. Suddenly the demand for vintage LPs, vinyl editions of albums, gramophones and record stores has shot up exponentially.

But Warsaw remains stoic in the face of all this sudden retromania. Here, this thing is nothing new: Warsaw had her record stores long before having record stores was cool. One of the shops, Hey Joe, boasts a legacy of over 20 years! This city is no London, with only three shops total catering to the vintage-vinyl-maniacs, but the three that trade here serve up a varied and eclectic palette of sounds. Whether you like to sway to some Sinatra or rock out to the golden oldies, we’ve found a shop for every mood and music fancy.

In the era of iPods and the shuffle button we’ve forgotten what it’s like to savor an album as a whole. So this Valentine’s Day, take a stroll around those quirky, dusty spaces with your special someone and rekindle an old love for that big, black LP. Remind yourself what it’s like to measure a moment by the length of a record album side…

For the Helpless Romantic

ul. Warecka 4/6, tel. 22 826 1216, www.muzant.pl.
The two men that run the basement shop definitely leave you to your own devices. So you’re welcome to browse their extensive collection of second-hand LPs ranging across all genres, for as long as you please, without being disturbed. Scour through crooners like Simon & Garfunkel, Elvis and Leonard Cohen or Spanish tango and Polish jazz.

For the Thrill Seeker

ul. Zlota 8
No more than 70 cm between the window and the shelves packed to the brim with vinyl, this legendary store makes for a very personal experience. Here, the saying “three’s a crowd” takes on quite a literal meaning as one tries to navigate around. The owner is more than willing to engage in conversation, guide you through his collection and share the stories behind all his rare LPs.

For the Mellow Man

ul. Tamka 45
Nestled in a row of specialist establishments, this record shop/bookshop is crammed with goodies. It’s home to a wide range of classics – from classical music to classic Beatles rock – and all can be listened to there and then on the gramophone inside the shop. 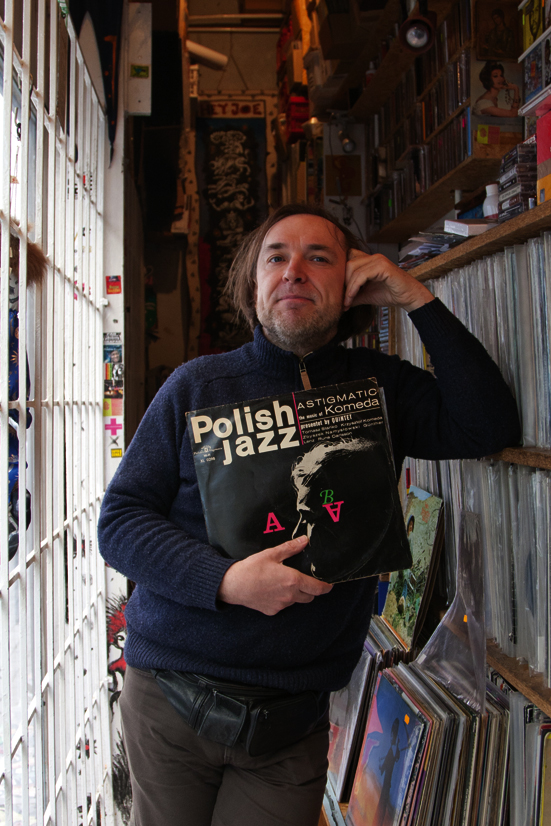 Looking to get into the mood for luvvin? The funky owner of Hey Joe opens his heart and reveals his absolute favorites to us. “Do they have to be the stereotypical ones?” he asks with a slightly dejected look. “No, of course not!” I reply. The result is a one-of-a-kind compilation of unexpected romantic numbers:

by Silver Apples (1968)
Genre: Psychedelic rock/electronic
“One of the best, if not the best, and most important album in the world”

by Manu Chao (2001)
Genre: Latin
“He succeeded in something that wasn’t meant to succeed, and there’s something romantic in that”

by the Komeda Quintet (1965)
Genre: Jazz
“One of the best Polish jazz albums by probably the most recognized Polish jazz artist worldwide”