With the weather set to turn for the wetter any moment NOW, bring a brolly to join us for a whistle stop tour of New Town!

Old Town’s lesser visited relation begins outside the redbrick Barbikan, and if our history books are correct, wasn’t legally absorbed into Warsaw until the 18th century – that’s 300-years after settlements first appeared. 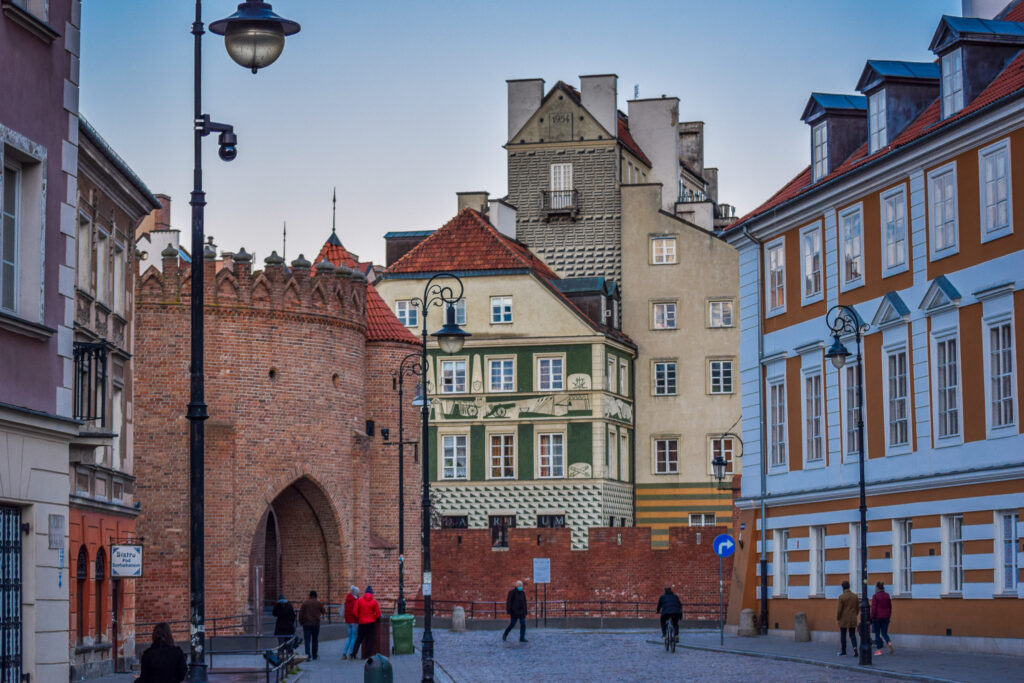 Now while it doesn’t get quite the footfall of its older neighbor, that’s not to say it should be skipped – and making a strong case for any itinerary is Mostowa, a steep little beauty lined with pretty tenements mostly reconstructed during the 1950s. Frankly, it’s been a good job, well done. 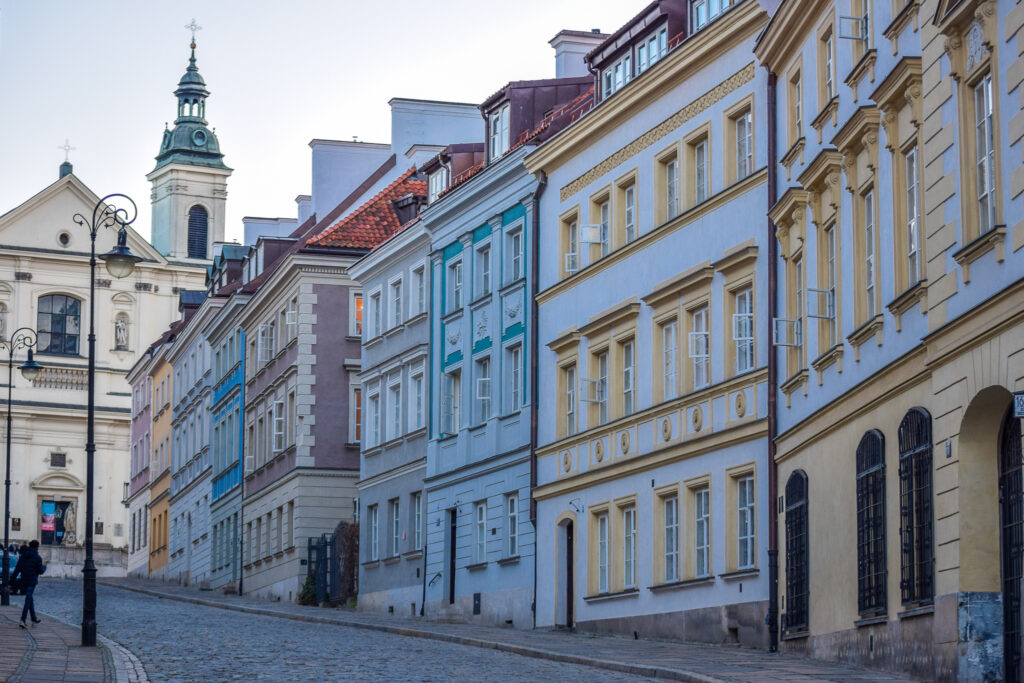 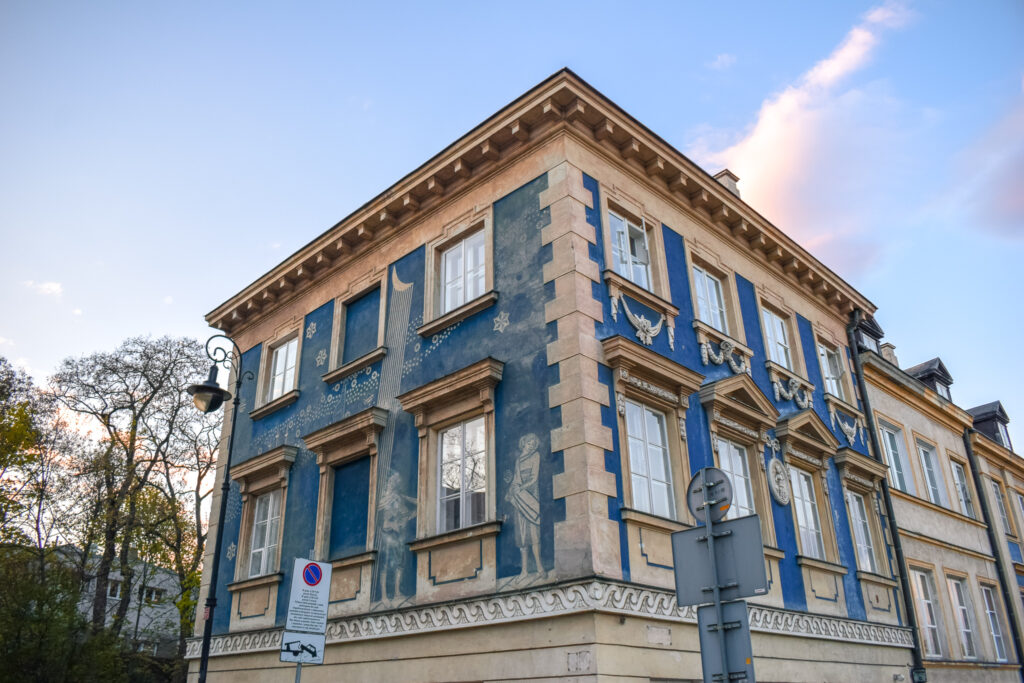 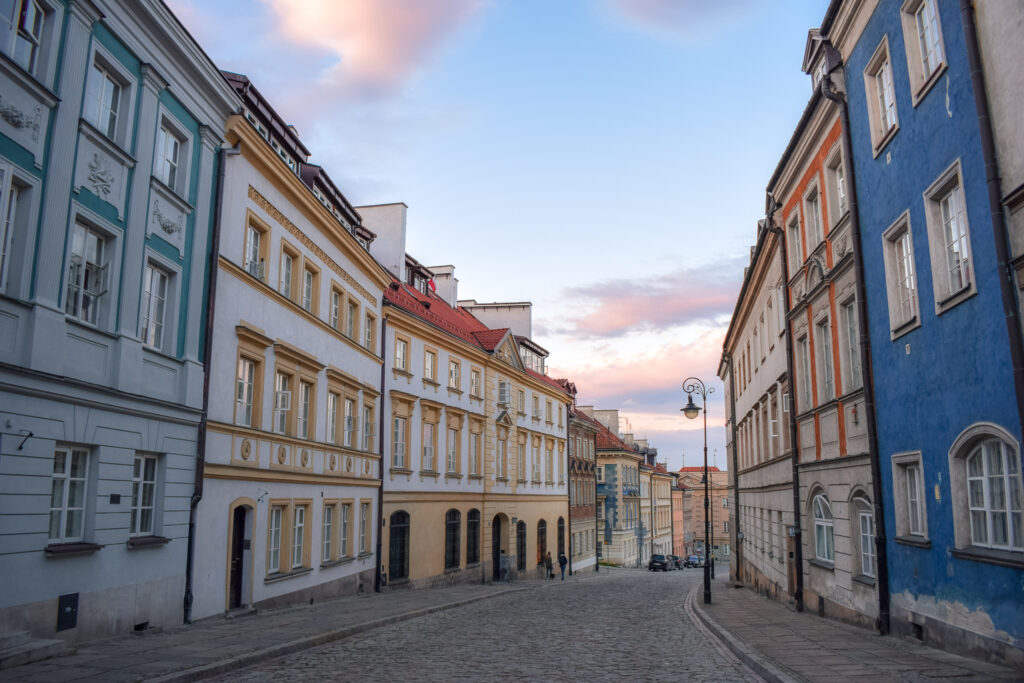 Back on Freta, and the Church of the Holy Spirit is worth a note for the newspaper kiosk attached to it on Długa 1. In terms of square meters, it’s reputedly the smallest address in Warsaw. 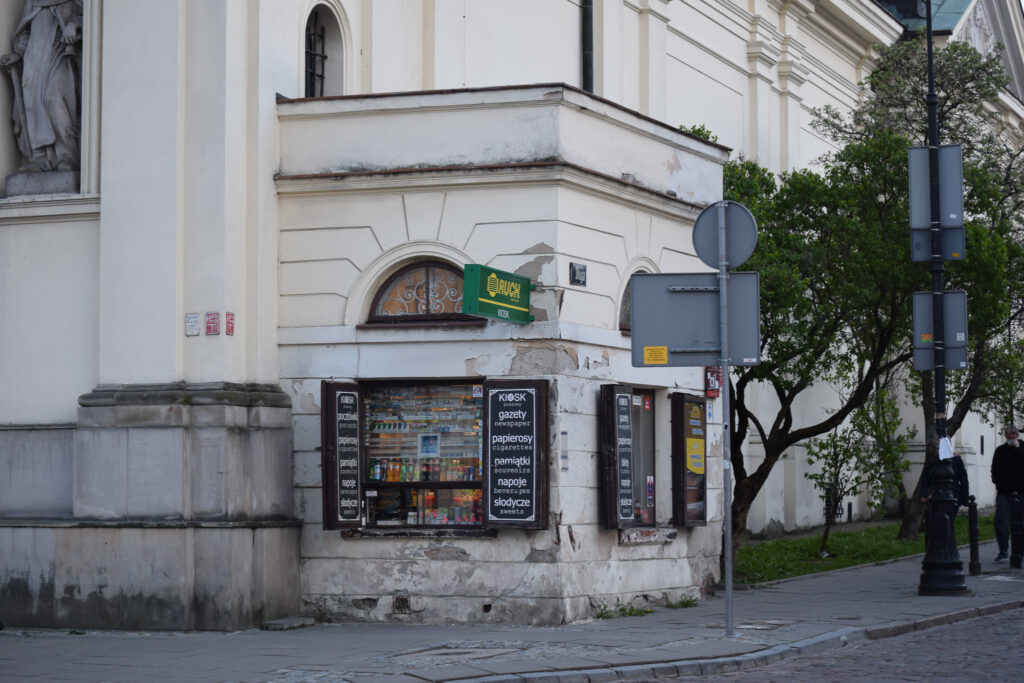 Completed in 1843, it was from here Karol Banasch sold tobacco imported from Constantinople as well as exotic cheroots from Cuba and Mexico. Felicjan Cywiński continued this tradition, often rewarding his regulars with a complimentary glass of wine.

Such was the buzz about the place, it became a gathering point for anti-Tsarist nationalists looking to covertly drop and exchange information during the 1831 Uprising.

Less than half a century on, a new owner scandalized the city – not to mention the adjacent church – when he added pornographic pictures from Paris to the store’s repertoire! 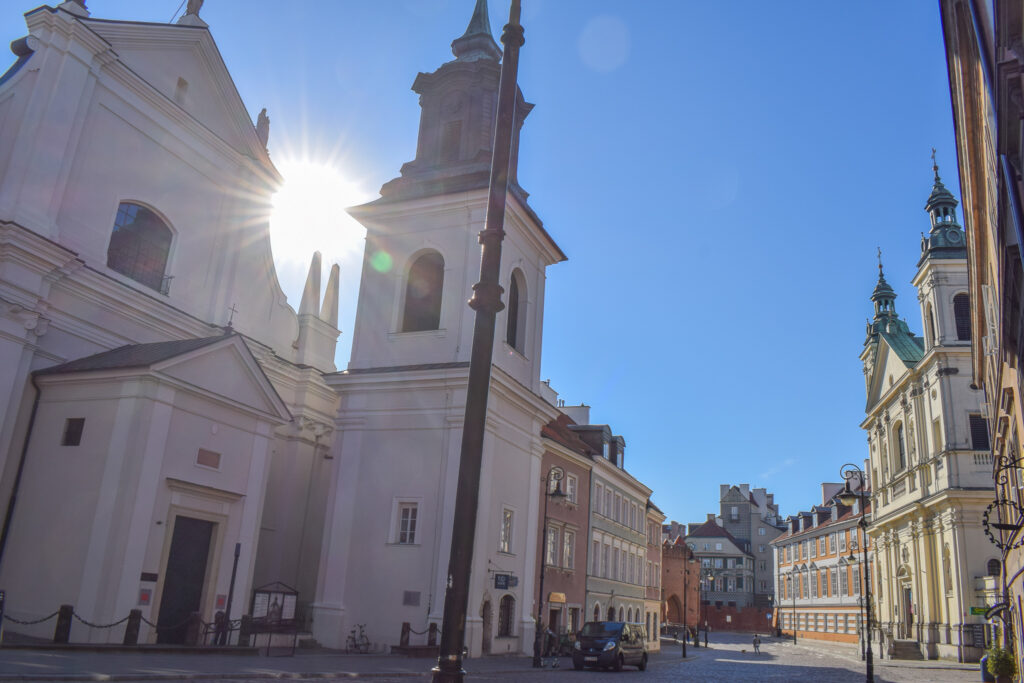 Standing not quite opposite, the Church of St. Jacek is a beauty and credited with holding “the last mass in Warsaw”. Held at 9.30 p.m. on Sunday, it’s alleged to be the latest religious service in the city.

In 1655, peace negotiations were held with the Swedes in the refectory, while WWII saw a grimmer footnote written when 1,000 were killed inside after it was bombed by the Nazis. Close by, several wall paintings pay tribute to the local rebuilding effort. 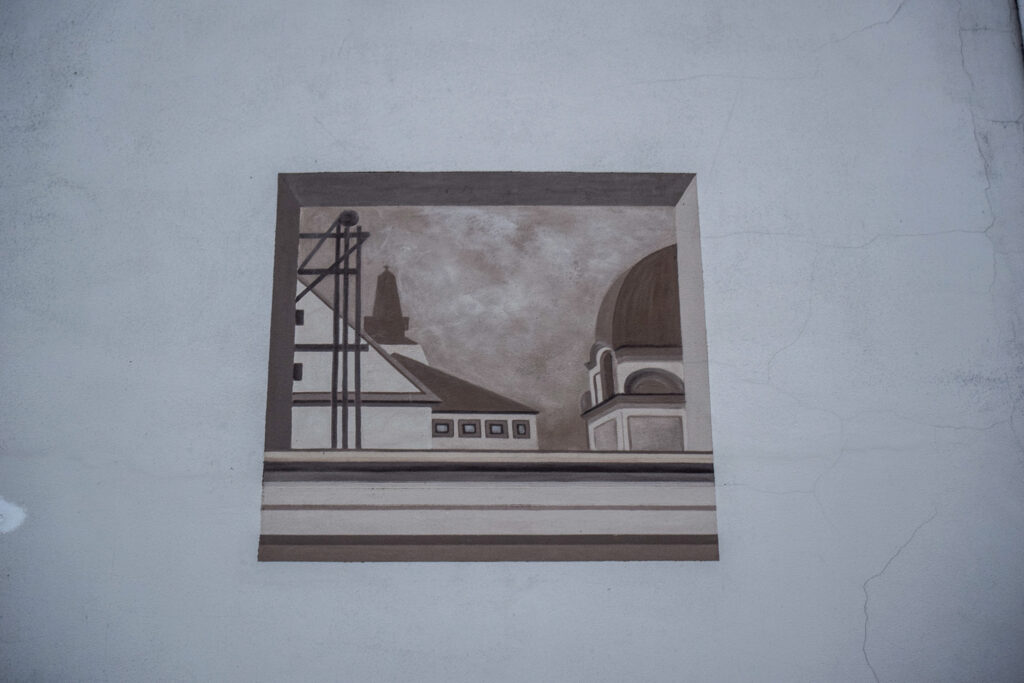 It’s worth peering behind and all, not least to view the totally fabulous Socialist era murals that adorn the primary school: depicting yapping, happy dogs and hard-working children they’re one of those little hidden gems you can’t help but smile at. 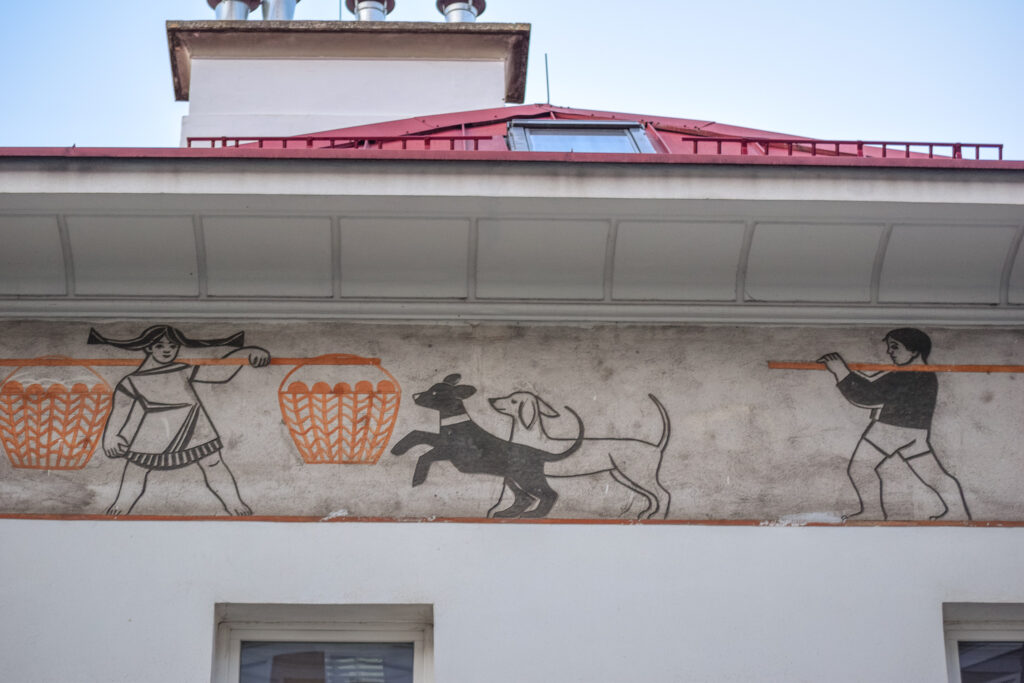 But reliefs and wall paintings are abundant in this area, not least back on Freta where all kinds of animals and people peer from the facades. 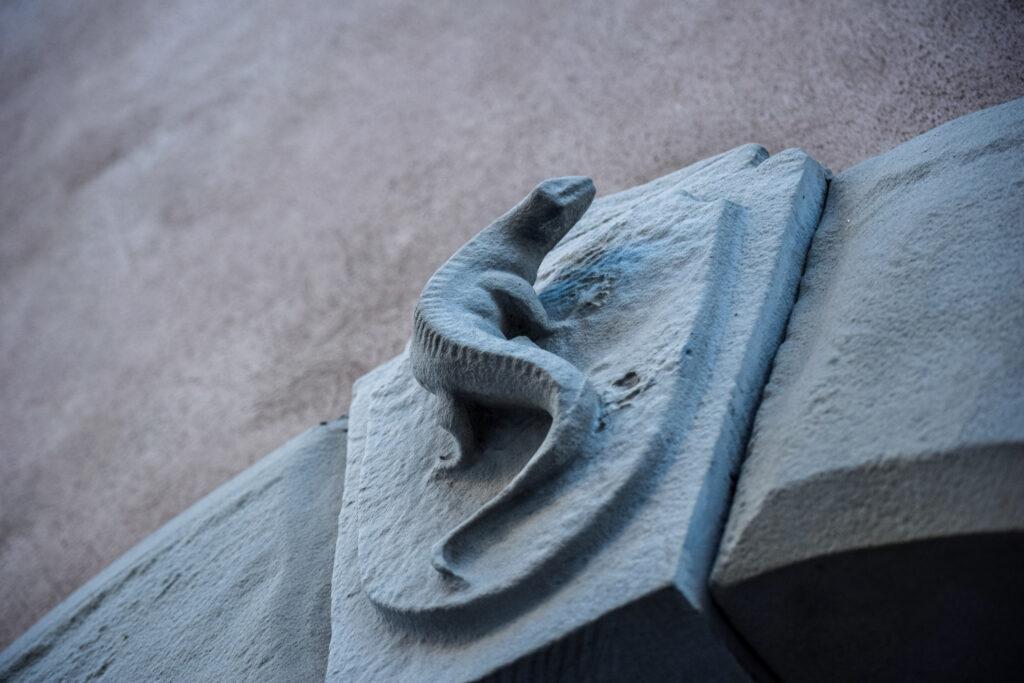 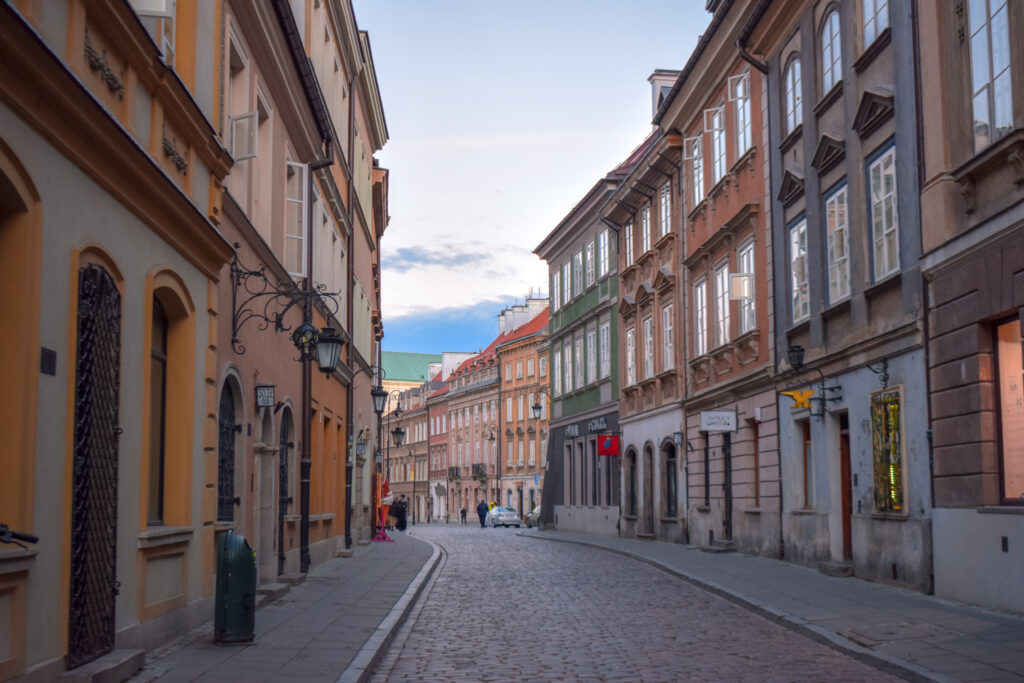 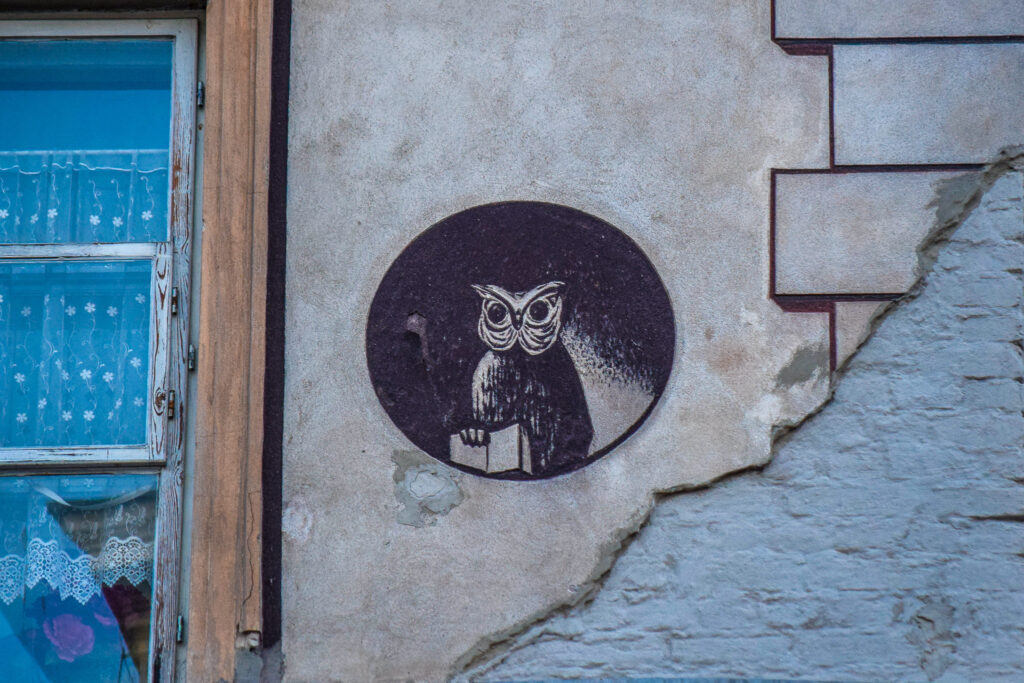 And while you’re on this street, pop by Marie Skłodowska Curie’s place of birth – now a museum honoring the scientist. 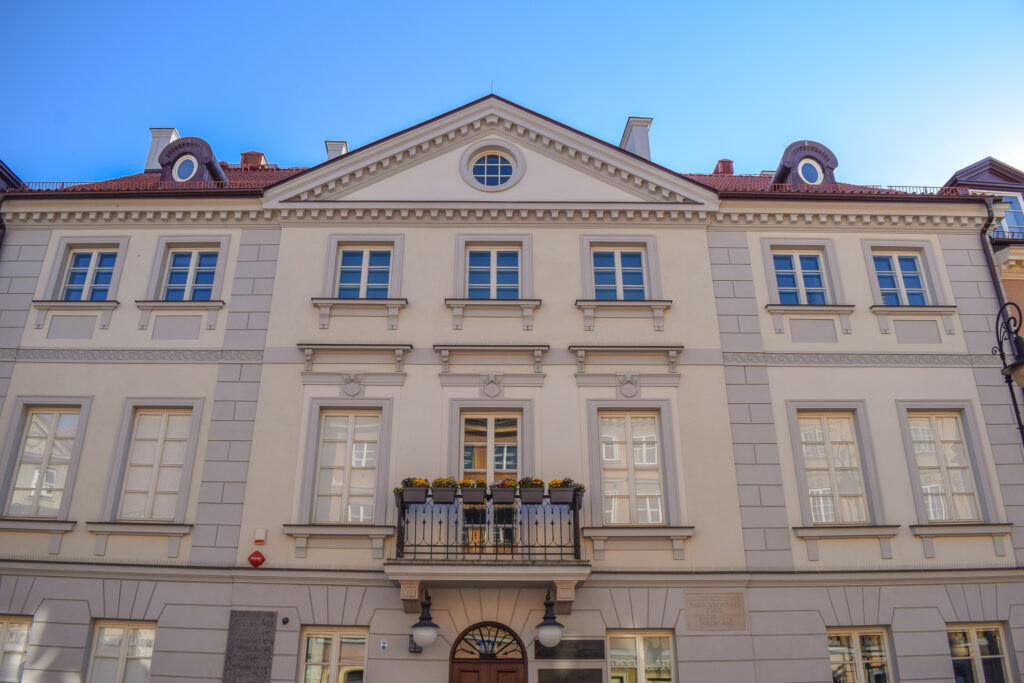 Continuing down Freta, you’ll soon come to Rynek Nowego Miasto. Formerly twice its current size, this has always been the focal point of New Town ever since the area was granted its own charter in 1408.

The town hall that once stood in the center was knocked down in 1818 as a result of Nowe Miasto’s absorption into Warsaw, a move that opened up the grand view you have now of the Church of St. Kazimierz. Notable for its grand dome, it was designed by the eminent architect of the day, Tylman van Gameren. 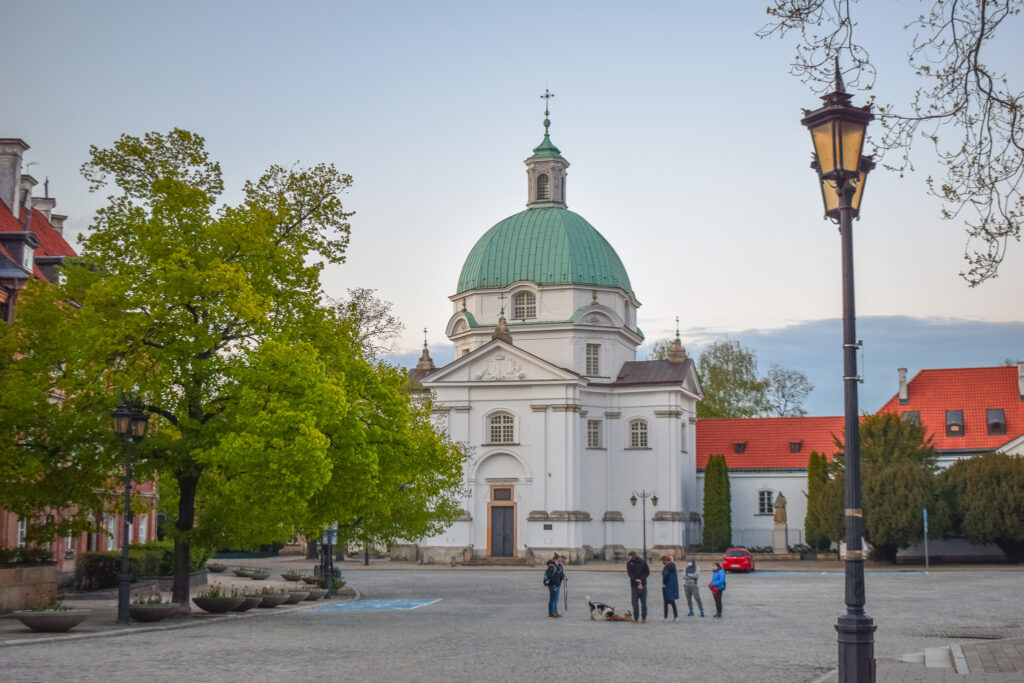 The square merits further exploration, again for the super quirky reliefs and adornments that decorate many of the buildings, not to mention the stone bears standing guard on ground level. 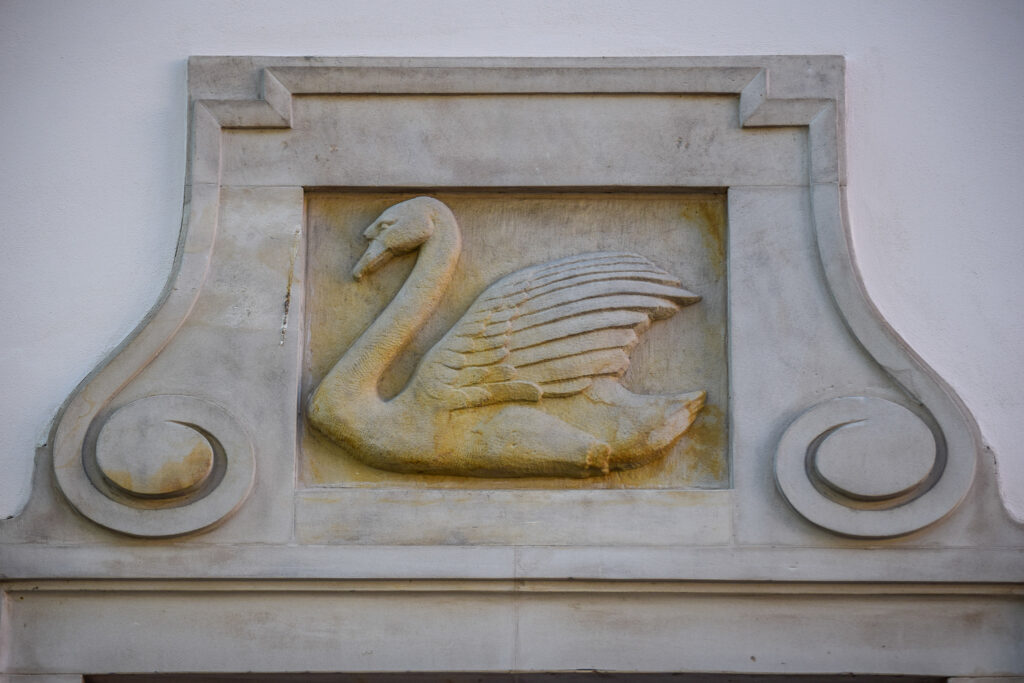 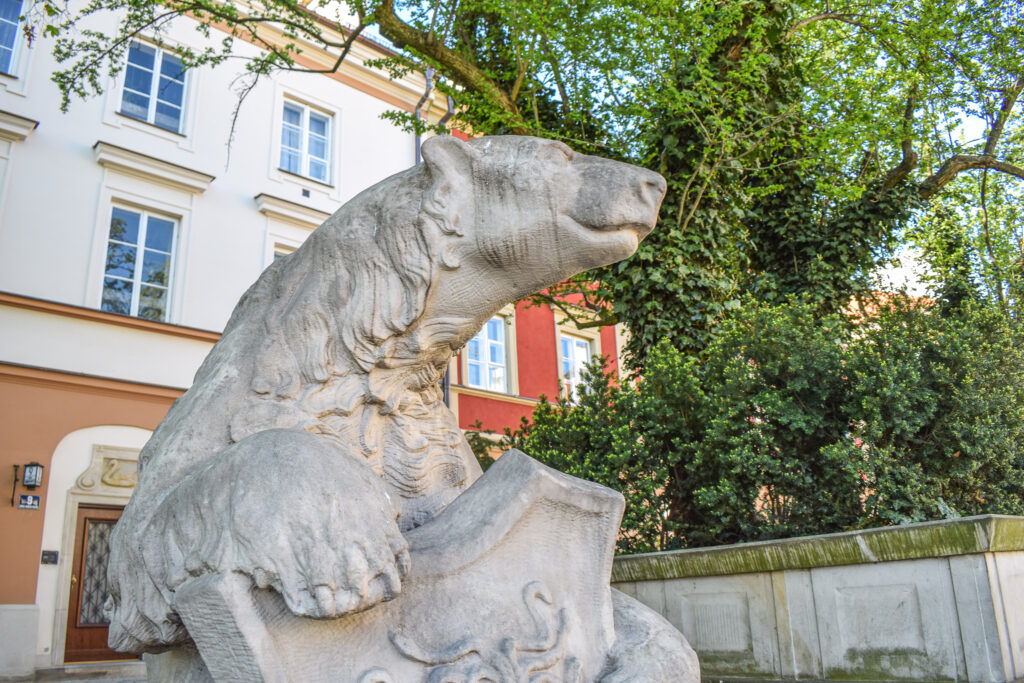 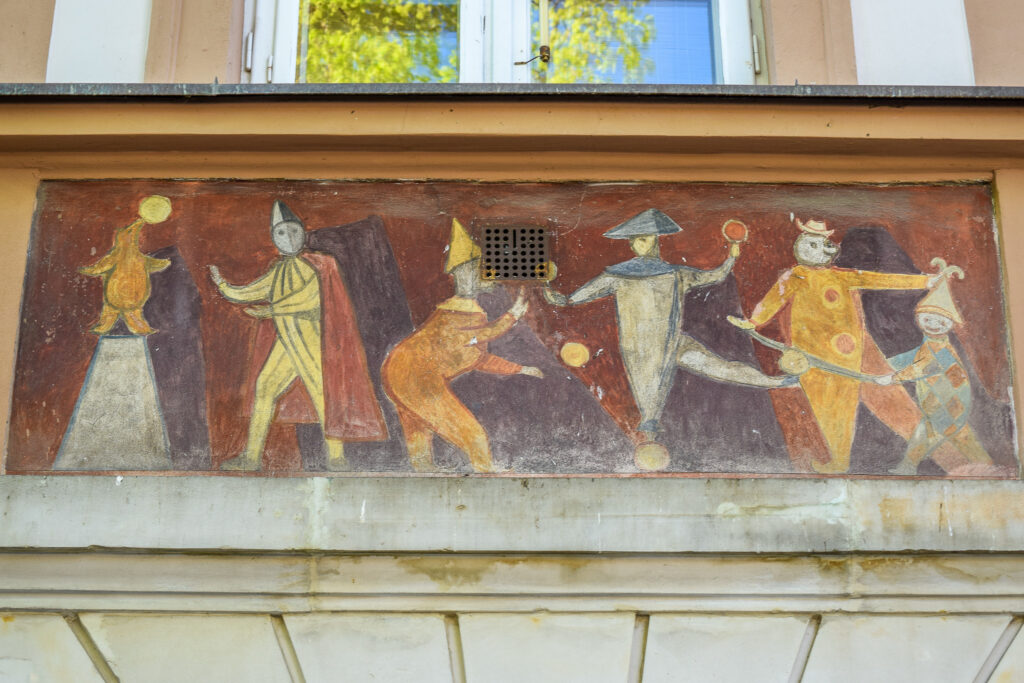 Onwards, and the Church of the Visitation of the Virgin Mary has its roots in the 15th century and looks more akin to the Gothic churches more commonly found in Warmia. The statue outside, meanwhile, that’s Walerian Łukasiński, a Warsaw-born officer and patriot that died after being held for 46-years in solitary captivity in a Tsarist jail. 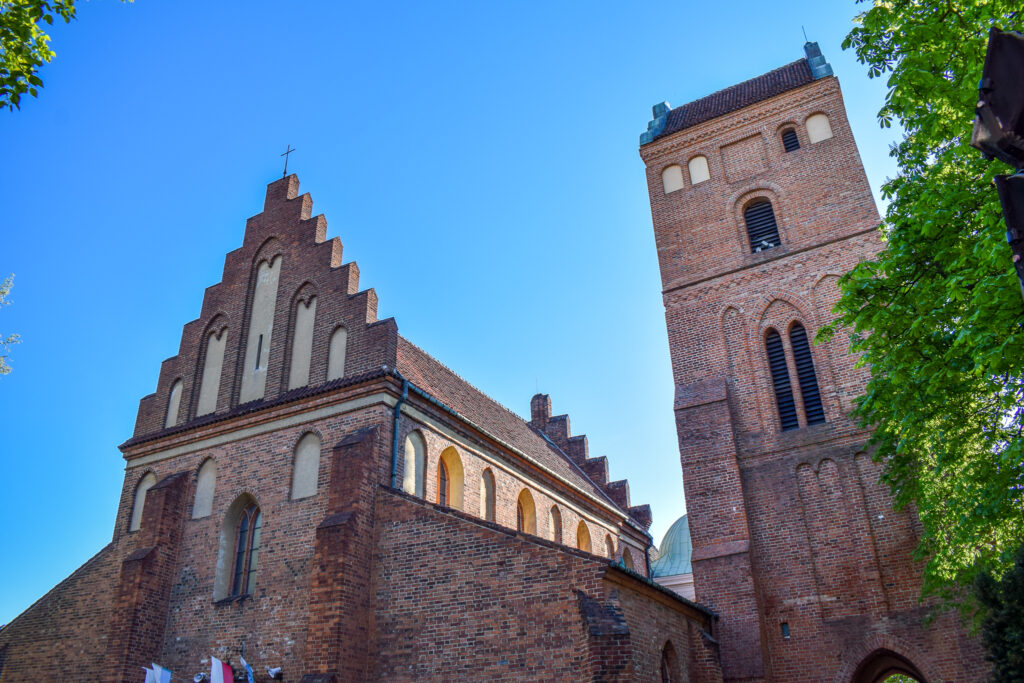 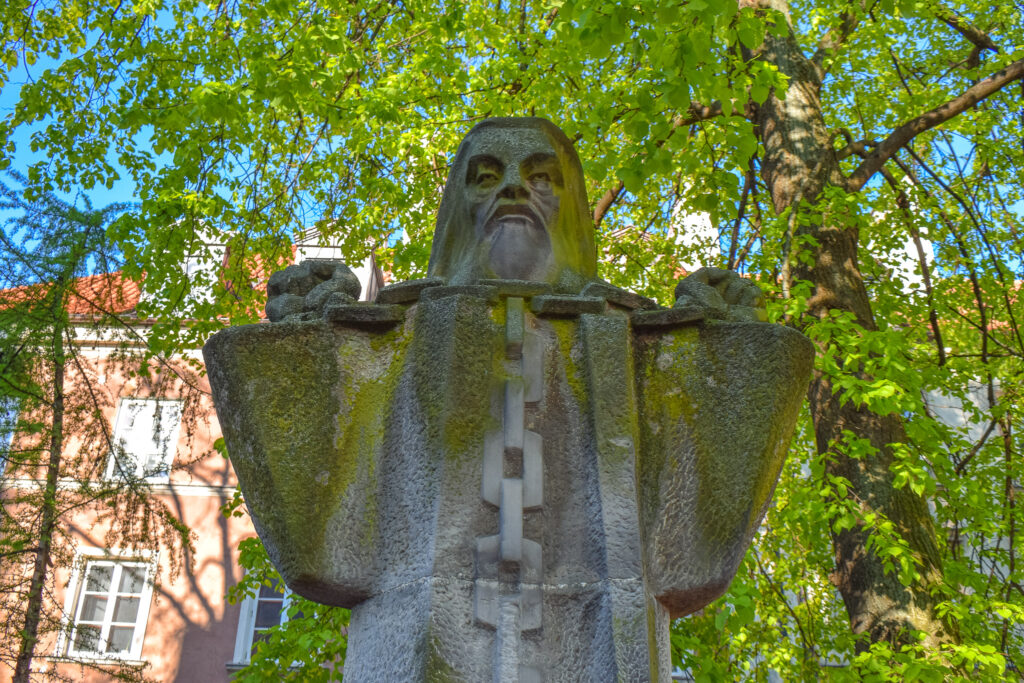 Statue-wise, and the area’s associations with Marie Skłodowska Curie are affirmed by a statue bearing her likeness overlooking the river. Promising grandstand views of the fountains below, her statue was added in 2014. Neither was the location incidental – it was in the church next door that the two-time Nobel Prize winner was baptized. 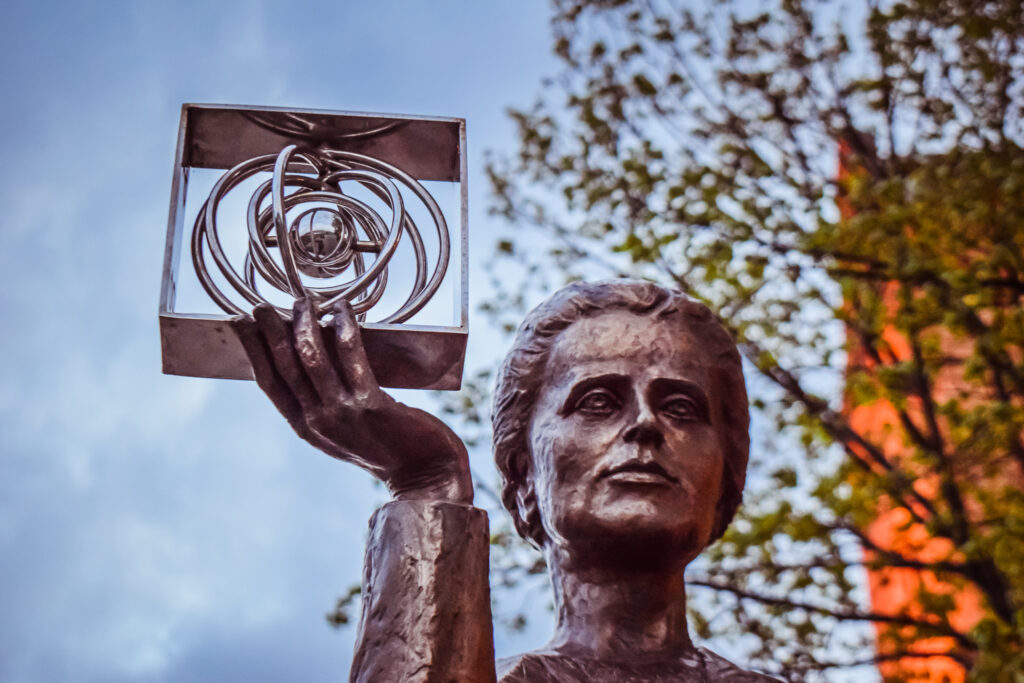 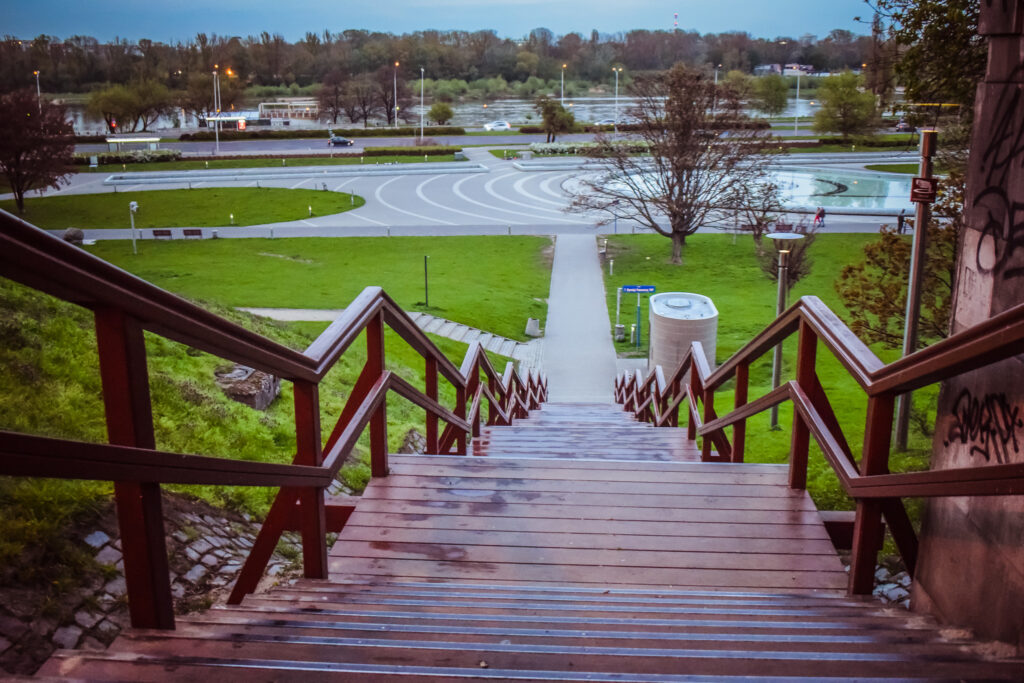 For more curiosities, it was at Rajców 11 that super spy Ryszard Kukliński lived before his daring defection to the West in 1981. Remembered in history as one of the most important spies of the Cold War, his actions still divide Polish opinion with some lauding him as a hero, and others criticizing him as a traitor. 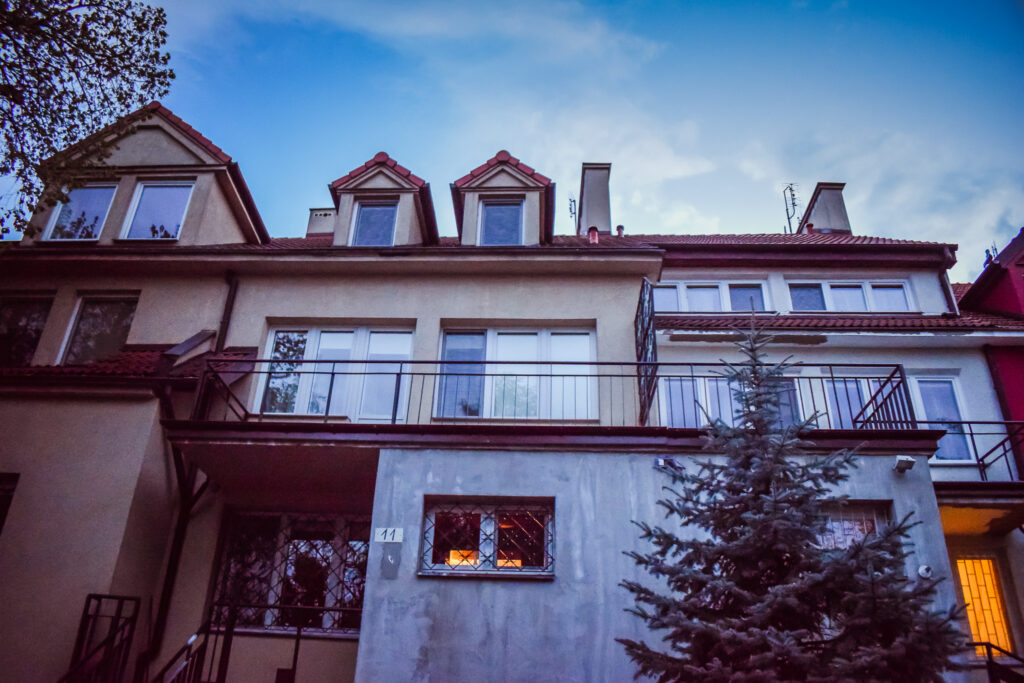 Moving on, and a memorial marker showing the border of the Jewish Ghetto on Franciszkańska and Freta is a stark reminder of the Holocaust and the presence of what was once the biggest and most significant Ghetto in Nazi occupied Europe. 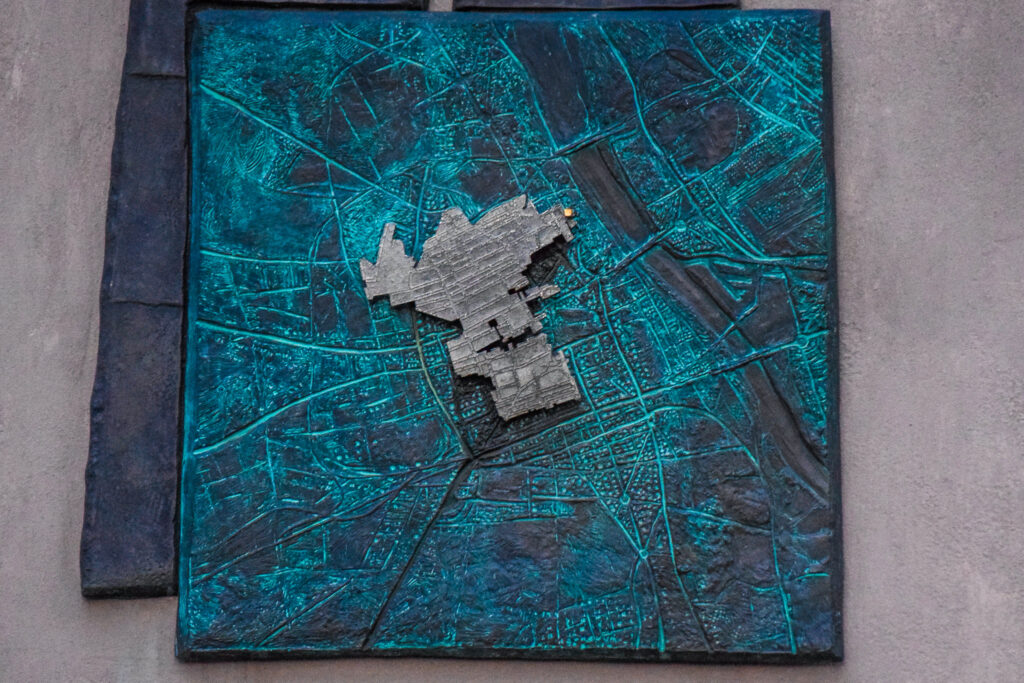 Finishing on a lighter note, conclude your tour at the bronze circus bear at Wójtowska 11. Perched on top of a drinking fountain since 1999, according to some sources the statue is a humorous hat tip to the Fifth World Festival of Youth & Students. Held in Warsaw in 1955, the event’s entertainment program included performing bears being paraded through the historic center. 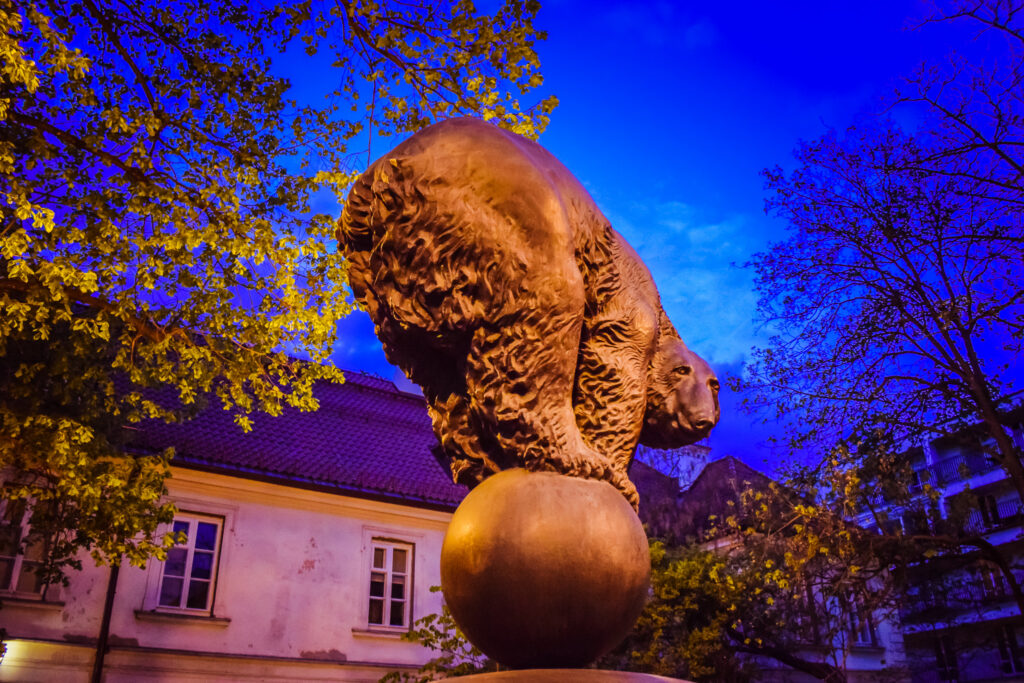