An inside look at Warsaw’s Neon Muzeum

Frequently cited as being “Warsaw’s most Instagrammed attraction”, one would be forgiven for thinking that the city’s Neon Muzeum existed solely to advance your standing on social media.

That, though, would be missing the point. Founded in 2012 as the result of one couple’s passion for this exquisite form of art, the museum has become a trailblazing catalyst whose launch effectively reactivated Poland’s obsession with neon – what had become a dying discipline was once again hip.

“At first, myself and my partner, Ilona Karwinska,thought we were documenting the end of Polish neon,” says David Hill, co-founder of the museum, “but from quite early on we both realized we had happened upon something quite important.” With a professional background heavily rooted in typography, Hill’s first trip to the Polish capital in 2005 left him struck silent by the old neon signs that illuminated the city. With Karwinska, an acclaimed fine arts photographer, searching for a new project, the couple found themselves sufficiently inspired to travel the country and record all the neons they could find before they vanished for good. Met with unexpected enthusiasm by the general public, when a book was subsequently published the couple found themselves inundated with tips locating the neons they had missed. Even more surprisingly, they began fielding calls from shopkeepers asking if they wanted to keep their old signs.

“All of a sudden,” says Hill, “we went from being observers to actively engaged in the preservation of neon.” With their collection mounting up, opening a museum wasn’t a far-fetched idea. It was a decision that would be ultimately justified by the public’s response. Hailed in titles such as Wallpaper*, Vogue, Tatler and Time, it has since become a cult port-of-call, drawing an estimated 5,000 visitors per month to become one of the city’s quirkiest draws. In the process, its popularity has sparked a countrywide revival with a customized neon now seen as an affirmation of cool by every independent business.

Although the presence of neon in Warsaw predates the war, it was the Communist era that saw this luminous form of advertising come to the fore. Connecting the government’s attempts to fuse socialist ideology with consumerism, the project to ‘neon-ize’ Poland saw the country’s shattered post-war cities transformed by gleaming lights manufactured by the top artisans of the period. In the decades that followed, these magnificent technicolor glories became an underlying feature of the nation’s DNA.

The fall of the Iron Curtain cut short the country’s love affair with neon. Seen as an outdated reminder of the bad days, the signs that were once such an intrinsic element of the nightscape found themselves phased out and replaced by blunter forms of advertising. That is, until, Hill and Karwinska came up with their idea for a museum… It All Began With… Berlin! “Originally we just intended to photograph Warsaw’s old neon signs, but when we learned that Pl. Konstytucji’s Berlin was about to be destroyed we immediately contacted the owners and pleaded with them to save the sign. Eventually persuaded, they donated it to us. That was the moment the project took a major turn for us: we went from being observers to activists.”

We Could Stare All Day At… “Our giant, pink Syrenka. Wherever you saw this mermaid – sitting on an open book – was where you would have found your local public library. She encapsulates the entire neon collection for us: a beautifully designed neon symbol with such a rich and interesting history.” 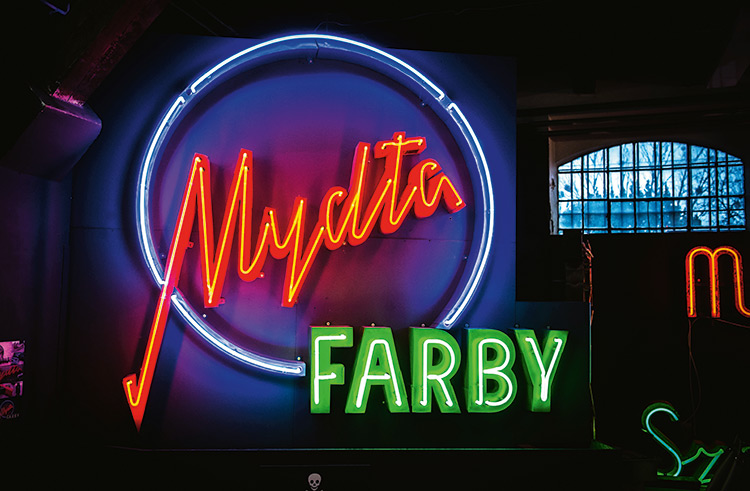 “All of our signs have challenged us in one way or another, however,the most technically complex and expensive restoration was saved for Mydła Farby. Having been first erected in the early 1960s, the elements had almost completely dissolved the sign by the time it fell into our hands. Our neon specialists treated the project as if they were recovering the Tutankhamun!” 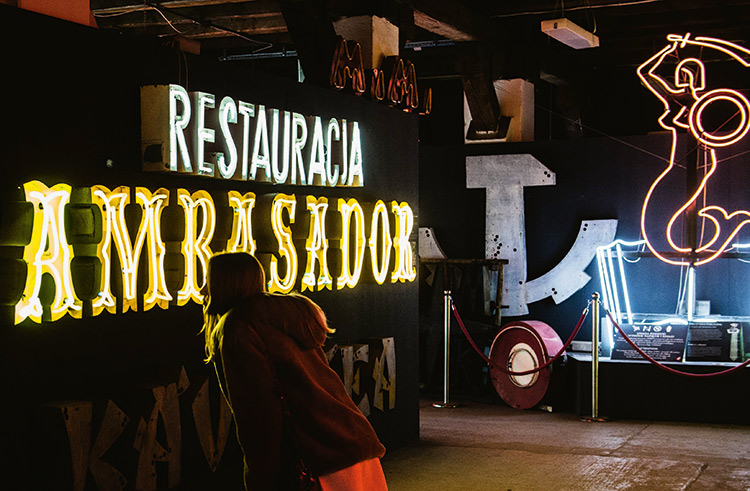 “Ambasador Restauracja. This neon once adorned a restaurant that the top politicians, dignitaries and ambassadors of the day used to frequent. To our sheer joy and amazement, the sign was donated to us by none other than His Excellency Ronald Dofing – the Luxembourg Ambassador to Poland. Basically, it was his favorite restaurant – when it closed, he saved the sign.” “We thought that the Kino Praha neon that once adorned Praga’s famous cinema had been destroyed along with the building back in 2004 – so four years later imagine our surprise when we received a call from a farmer who had been involved in the demolition. Amazingly, he’d had the foresight to save theletters and rang us to say we were free to take them! Our excitement was tempered a little by the fact that the letters had been left to rot in farmyard muck, but a full restoration soon removed all trace of this brief but ignominious exile. It goes without saying, we’re wholeheartedly grateful to this farmer!” “Probably the most adored sign in our possession is Kubuś Puchatek, a.k.a.Winnie the Pooh. It originally signposted a now defunct toy shop in Poznań, and although it’s pretty small it’s the one neon that everyone seems to want their picture with.” “This has to be the absolutely astonishing typographical triumph that is Społem. Taken from the SAM Społem, PRL era supermarket that once stood on Marszałkowska, when the building was bulldozed the owners fully restored and generously donated the sign to us: it’s actually one of the largest in our museum! For us it’s representative of a time when the public were given new ways to shop and were encouraged to believe that an economic revival was in full swing.”