Taking girl power to the next level, two sisters have set about shaking Warsaw’s wine scene…

It takes passion and commitment for a business to thrive; double the dose and great things can happen. Take Nowina, a project co-founded by two sisters, Paulina and Stefania. Bonded by more than blood, it’s their shared focus and ambition that has elevated this wine bar to unforeseen heights.

An intensely personalized experience, it’s the devotion of the sisters that provides the underlying theme that runs through Nowina. “You’ll always find one of us here,” says Paulina, “which is why we had to create a place in which we both could spend time.” That’s meant an interior formed in collaboration with the acclaimed Smallna studio, and a design that mixes high quality finishes with eclectic fine details: elements by Tom Dixon, Eames and Oskar Zięta mix seamlessly against more whimsical touches – original 19th century flooring, lights sourced at auction from the Europejski Hotel, and a staggering collection of wine paraphernalia. 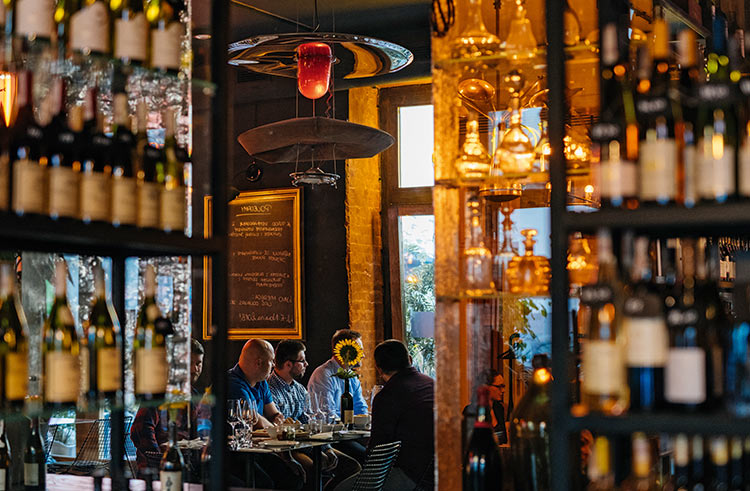 Of the latter, it’s the assembly of corkscrews that speaks loudest for the project. Donated by their father, himself one of the early pioneers that transformed Polish wine culture, they’re a compelling feature that say much for a lifetime dedicated to wine. “Growing up,” smiles Stefania, “home life was all about wine.” The thousand plus corkscrews, many over a hundred-years-old, are the remarkable manifestation of this family’s obsession.

But if the notion of family is important to the sisters, then their connection to Nowina’s customers is equally apparent. Made from hundreds of corks contributed by friends, the basement’s defining feature is a magnificent world map that dominates the space in a manner that feels both organic and warm.
But from the outset, forming such a relationship with guests has been high on the agenda, a point that’s emphasized by numerous initiatives that add distinguishing character.

“We adopt unwanted plants in exchange for wine,” says Stefania, “and we’ve introduced a system where we index client preferences on hand-written cards – you don’t have to remember what wine you liked the last time, we’ll remember that for you. Sure, it might have been easier to create an app, but we both wanted something physical that felt a little more intimate.”

Intimacy, however, is not short in supply. Defined by its low lighting and laidback charm, it’s a space that feels easy and engaging and natural in appeal. Being here, you want to linger. And linger you will, for more than just an addictive environment, Nowina transpires to be a wine bar of note. Working directly with esteemed producers, over 450 labels have been procured all of which are available from the adjoining store. Though possibly the smallest such store in the country, it’s a choice that’s educated, relevant and surprisingly extensive: there’s a clarity of thought that sings in tune with the overall concept.

Supported by a busy program of events and tastings (“Even tango nights!” adds Paulina), the impression is of a place that values social interaction and the rituals of wine. As part of that, food of course plays a prominent role thanks to a light Mediterranean menu that’s been honed around the seasons. Designed by chef Arkadiusz Janczarek, a chef working in close cooperation with Poland’s Slow Food organization, it’s the final winning piece of Nowina’s complex jigsaw.