On A Pedestal: Nike

city center998 Communism25 history69 monument6 prl49 sightseeing73 tourism66
Resilient, courageous, combative and triumphant, the figure of Nike is all these and more. Standing at the intersection of Nowy Przejazd and Solidarności, the...

Resilient, courageous, combative and triumphant, the figure of Nike is all these and more. Standing at the intersection of Nowy Przejazd and Solidarności, the Greek Goddess of Victory (you didn’t think we were referring to the sneaker firm, did you?), is also arguably the city’s most misunderstood monument. Certainly, she can claim to be the most undervalued – positioned to ensure almost minimal human contact, Nike’s usually viewed as a passing blur from the back of a cab. Blink and you’ll have missed her.

So who is this fleeting apparition, and what does she represent? As with so many local landmarks, her story is rooted in the war and, more pertinently, its immediate aftermath. With Poland falling under the yoke of Stalin, Varsovians lived in a dis-engaged reality in which many of their wartime experiences were simply erased from the record books. The 1944 Warsaw Uprising, they were told by the communist leadership, was the work of bourgeois bandits and criminal adventurers – veterans who had fought in the rebellion were condemned and quite often persecuted. But a brief thaw in the paranoid political climate followed Stalin’s death, and it was in this period that the idea of monument to commemorate the city’s wartime suffering and struggle was raised. Still careful not to offend Big Brother next door, it was to be called The Monument to the Heroes of Warsaw.

After a long, convoluted process, a winning design was chosen, its author being Marian Konieczny, an upcoming sculptor schooled in Kraków under the acclaimed Xawery Dunikowski. Depicting a sword-wielding Goddess – her face apparently modelled on Konieczny’s adolescent daughter – the 10-ton figure measured seven meters in height and six meters in length. Her two-meter sword, meanwhile, weighed in at a ton, and was specially filled with steel rods to allow it to bend – but not break – in the case of high winds. Cast in Gliwice, the statue was then transported in two pieces to Warszawa-Gdańska train station.

While the original idea for a monument had been mooted in 1956, by the time Nike was ready ‘the thaw’ had passed. With this in mind, her plinth merely made a vague reference to the “Heroes of Warsaw 1939-1945”, while the unveiling ceremony was moved to a ‘safe’ date that wouldn’t clash with any event related to the Warsaw Uprising. Thus, finally, Nike was unveiled on 20th July, 1964, on Pl. Teatralny.

But this was not the end of her story. Having started her life in transit, Nike was on the move again, this time in 1995 after it was decided that the spot she occupied would be rebuilt in its pre-war form (what replaced her was the Jabłonowski Palace opposite the theater). For two years, she stood awkwardly behind this construction site before eventually being carried the short distance to her current home by a mobile crane.

Marian Konieczny, by now a respected artist with sculptures across the world (among others, the Martyrs’ Memorial in Algeria and the Kosciuszko Monument in Philly), was consulted on the move, and his plans envisaged a new 20-meter plinth that would award Nike the prominence she deserved. City Hall argued that nine-meters was enough and after much too-and-froing a half-way compromise of 14-meters was agreed upon. In many ways, it was an apt reflection on Nike’s life in limbo: never truly sure of what she was really commemorating, let alone where she should stand, she’s become the great ghost monument of Warsaw: there but out of reach. 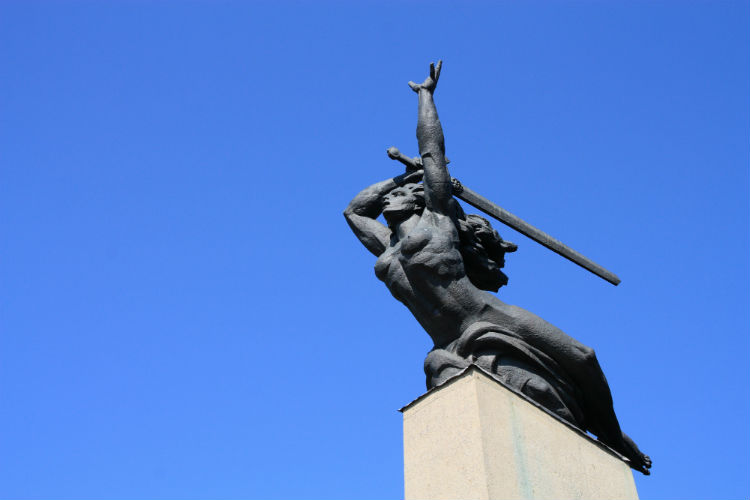 Choose Nike
When, in 1956, it was announced that Warsaw was to receive a monument honoring her wartime heroes the excitement was palpable. A competition to find a design was announced with the general public encouraged to enter. Revealing much about the disorganized state of this competition, as well as the ruinous state of the city, those submitting ideas were even allowed to specify the site of their choosing – soon, newspapers found themselves swamped with thousands of suggestions. “This is not an artistic competition,” sneered Świat’s art critic, Aleksander Wojciechowski, “but a national plebiscite.”

In all, 196 entries from home and abroad made it onto the final shortlist, and these found themselves on display in the Zachęta Gallery in April, 1958. In just a month, the exhibition was visited by 100,000 people. Many of the vaunted ideas were hokey, others impractical and yet more just plain crazy. A clutch, however, seemed to genuinely strike a chord – in David Crowley’s excellent book, Warsaw, the author writes of one “spectral scheme that took the form of a spiraling aluminum motif suggesting both a ladder and a mournful wisp of smoke.”

For reasons that remain unexplained, the original competition was scrapped and a new one launched, this time featuring 106 projects. While this perplexed the public, it seems likely that without the interference and insistence of Prime Minister Józef Cyrankiewicz, the whole idea would have been abandoned altogether. In the end one winner emerged with the panel of jurors choosing Marian Konieczny’s Nike. Though subsequently tweaked to its current form (the sculptor’s first sketches depicted barricades and other fundamentals associated with the Uprising), it was about as much as the people of Warsaw could hope for given the circumstances of the time.