With three Warsaw stations nominated for the Mies van der Rohe award, join us for a look at the history of the city’s metro…

Asked for one word to surmise the story of the Warsaw metro, many would answer in a heartbeat: delayed. Originally conceived in 1925, it was to take seventy years before the first underground trains started running, and even then only on a limited eleven kilometer stretch snaking from Kabaty to Politechnika. But while more stations have been added since, and yet others are in the pipeline, the city’s current 35 kilometer underground network still has a long way to go until it can compete in scope with other major cities.

Admittedly, and in Warsaw’s defense, not many towns have experienced the misfortunes and force majeure events that have shaped the Polish capital, and it’s these that explain the often lethargic pace of progress on the metro. 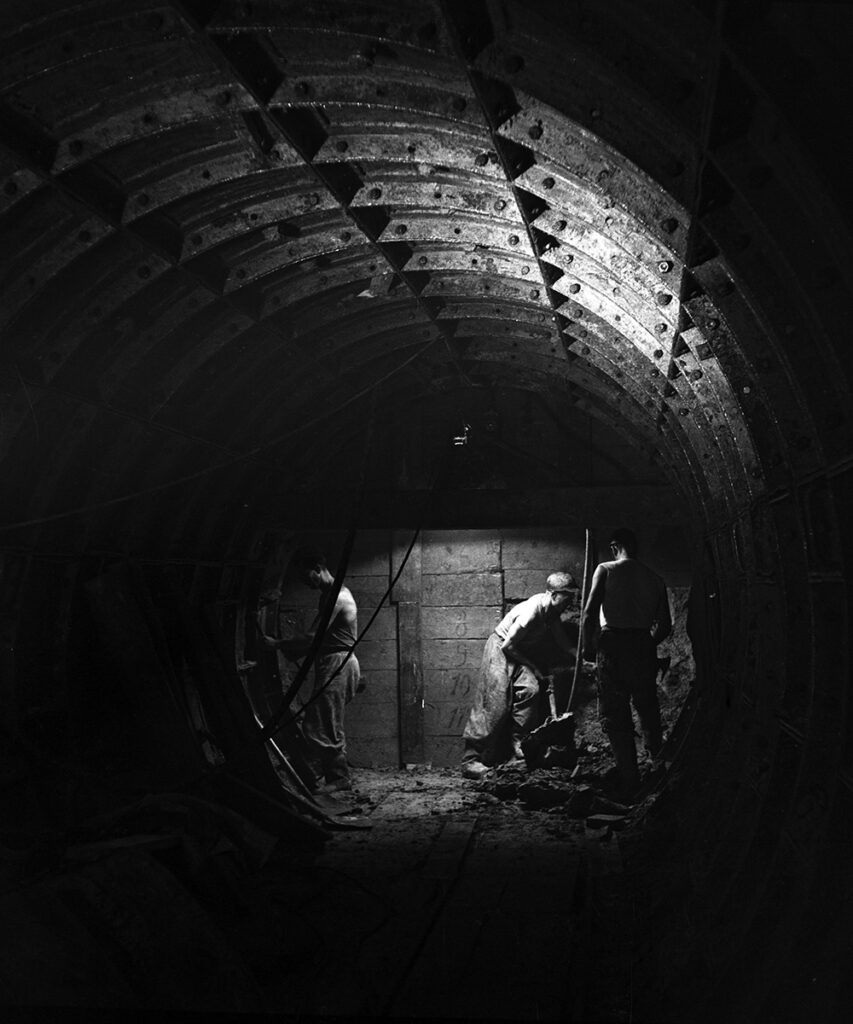 First approved in a resolution dating back to 1925, geological drilling began two years later only to stall once the financial burden became apparent. When the Great Depression struck, the operation was mothballed entirely only to later be revived by Mayor Stefan Starzyński in the late 1930s.

It was then that new plans were laid for an eight-line, 46 kilometer project to be implemented in stages over 35-years. Coordinating civil needs with that of the military, this pioneering blueprint was deemed “a hallmark of advanced professionalism and meticulousness.”

The outbreak of WWII put paid to the project but not the idea. Under the behest of the communist authorities a new venture was born in 1950 that envisaged a trio of lines that would not only zip the proletariat around the city, but also allow for the swift transport of troops should the need arise. Mimicking the lavish wedding cake style of the Moscow underground, work was anticipated to last until 1965 but once again was cancelled soon after the scale of the cost became too much. 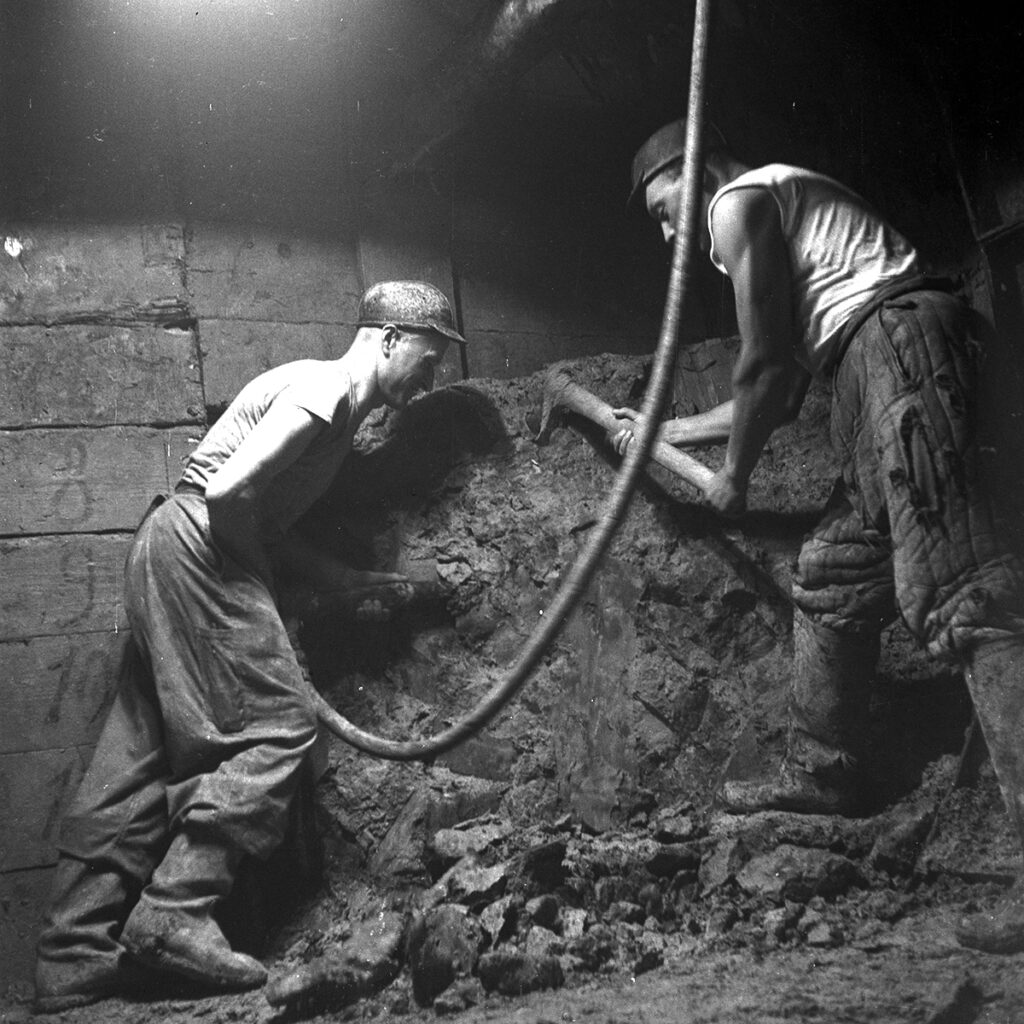 Not to be defeated, the communists tried again in the 1980s; with impeccable timing, the announcement was made in the winter of 1982, essentially in a cheap attempt to deflect public attention from the imposition of Martial Law, and work started the following year. In keeping with already established tradition, this was to prove a laborious and plodding process, and it was only in 1995 – long after Communism had collapsed – that an eleven station line was unveiled to the public.

While construction had been initiated under the old regime, and despite the presence of Russian rolling stock, the opening was seen as a triumph that heralded a new age for Warsaw. “This became more than an urban project,” says Witold Naturski of the European Commission, “it became symbolic of changes, freedom and new perspectives.” 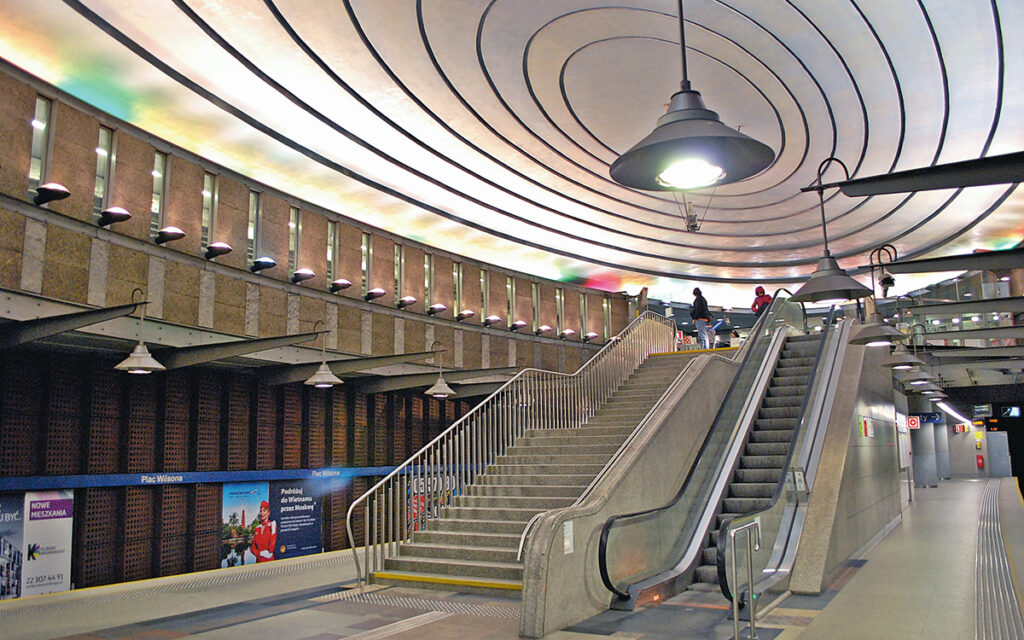 Further victories were to come. In 2014, CNN included Pl. Wilsona on its list of the world’s 17 most impressive stations, noting that it looked like it might have been built by aliens, and while Warsaw’s local government has strenuously denied any extra-terrestrial involvement, that hasn’t stopped conspiracy theorists nor accounts of other oddities.

For a start, there’s talk of a ghost train. In 2010, there was speculation that metro chiefs were planning to hire a ghost hunter after workers reported sightings of a mysterious, driverless train hurtling around the track at breakneck speeds. According to some reports, workers were even afraid to go to work, despite underground CCTV failing to pick up any supernatural activity.

Then, two years later, during the construction of Line 2, a video emerged online claiming that hundreds of dead bodies lay hidden along the new route. The discovery of the corpses, said the video’s author Herbu Grabie, was being kept under wraps.

“Workers have uncovered human skeletons and human remains in various stages of decomposition,” Grabie said. “The number of corpses is estimated to be in the hundreds, but no one knows the exact number. Bones and skulls are loaded directly onto trucks and taken to a landfill and dumped.” 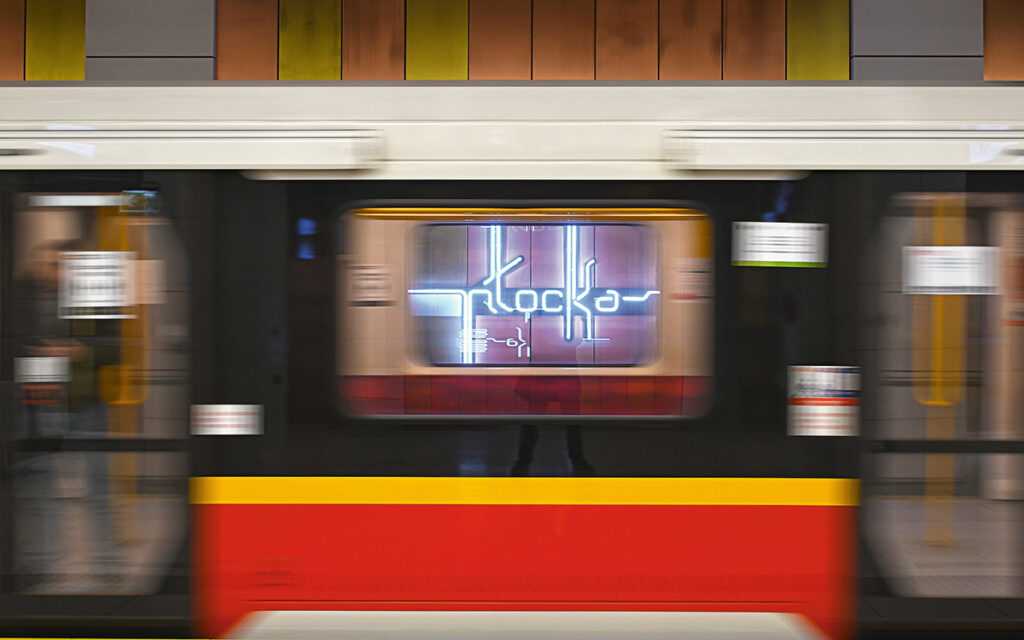 The claims were picked up by news channel TVN who contacted the police and prosecutors office. Both denied any reports of dead bodies, but suspicions remained. Not that that has seemed to bother some. Indeed, according to sexologist Zbigniew Izdebski, randy couples have taken to bonking on the metro. In his book The Sexuality of Poles in the Early Twenty-First Century, Izdebski says he found that a whopping 4.3% of Warsaw’s population had enjoyed an amorous romp on the underground at one time or other.

The metro has been associated with bumps of a different kind as well, with the ongoing realization of the second line thwarted at different times by floods, fires, unexploded WWII bombs and archaeological discoveries that have included relics from the city’s 19th century uprisings and, even, the remains of a prehistoric mammoth. 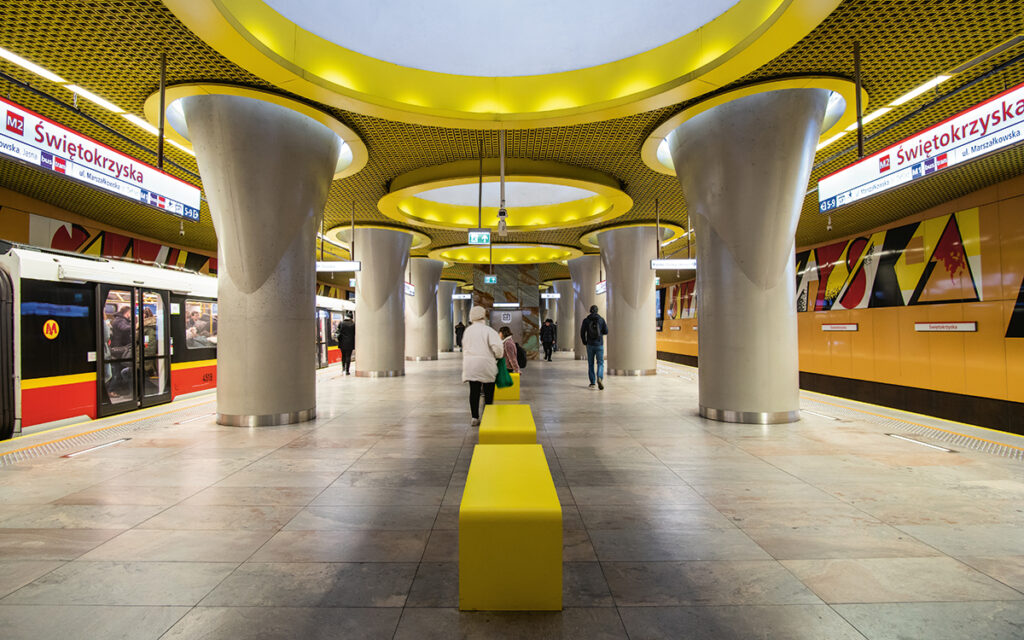 But despite the various and varied hiccups, all agree the results have been worth the wait, and that’s never truer than in the case of the second line. Notable at some stops for graphic signage designed by artist Wojciech Fangor, and in others for cosmos-inspired escalators that have you travelling with the stars, it’s a line that’s (slowly… very slowly) becoming the envy of Europe, a point attested by January’s news that a trio of stations have been nominated for the prestigious Mies van der Rohe architectural prize.

Unveiled in low-key circumstances at the height of the first lockdown, Metro Płocka, Młynów and Księcia Janusza have since won widespread acclaim for their individualized aesthetics and functionality, not to mention their striking use of light and neon. 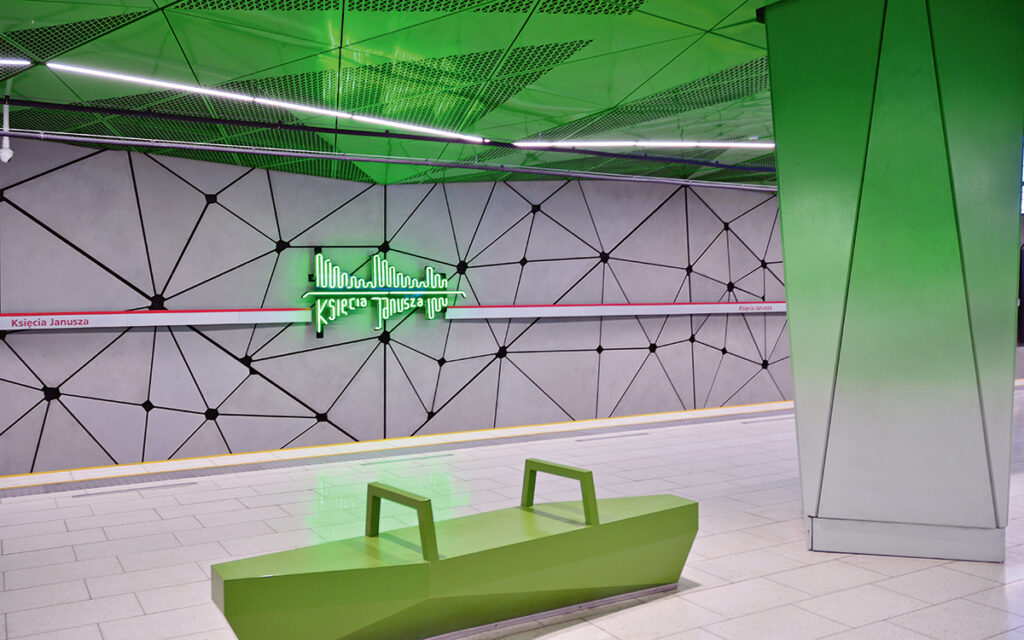 Defined by its greenish glow and interlocking panels, Księcia Janusza was designed to reference the pre-war gardens and greenhouses that once dominated the neighborhood. Decked out with glimmering copper, Płocka, meanwhile, was intended as a homage to the area’s manufacturing heritage. 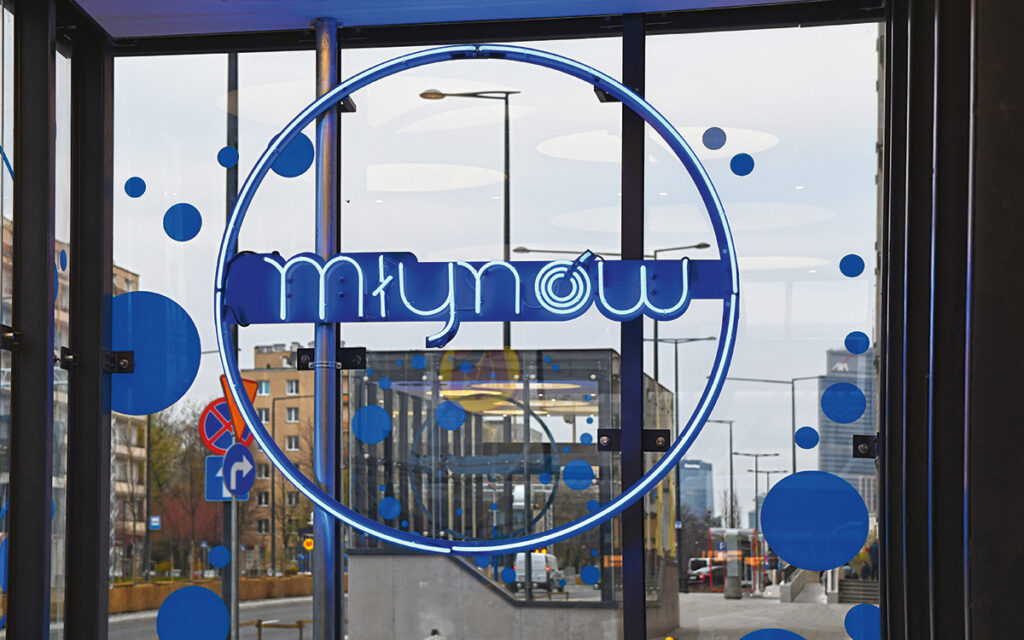 No less impressive, Młynów, with its blue bubbles and cool white finishes, was inspired by the proximity of Moczydło Water Park and the district’s reputation for rest and recreation.

All three were designed by the Kazimierski i Ryba architectural studio and will be hoping to follow in the footsteps of the Szczecin Philharmonic which, to date, has been the only Polish building to claim the top prize at the Mies van der Rohe awards.