Paddle and Float Away

Not keen on sailing? No worries, you can still have fun splashing the waters of the Mazurian Lakes.
By Kit F. Chung

Come summer weekends, the denizens of the capital decamp to the Masurian Lake District to snuggle up to nature. Almost every Pole I know has sailed these waters. It’s a local rite of passage to write off a few weeks of summer nights to slosh beer and croon sailing songs on the campsites by the marinas.

It takes only three hours (at a sensible speed) to reach the southern perimeters of the lake lands, so it’s a quick and no fuss getaway for city-weary folks. However, these lakes are no tiny puddles. You have to know your way around on the waters and how to tame a wind-powered vessel. Locals who frequent Mazury usually have a sailing license. For me, the whole business of renting a boat and hiring a skipper (you need one of these bodies if you don’t have the permit to sail) is way too much coordination for my holiday-soused mind. Canoeing on the Krutynia trail, on the other hand, needs no paperwork and minimal prep, thus permitting one to be spontaneous. 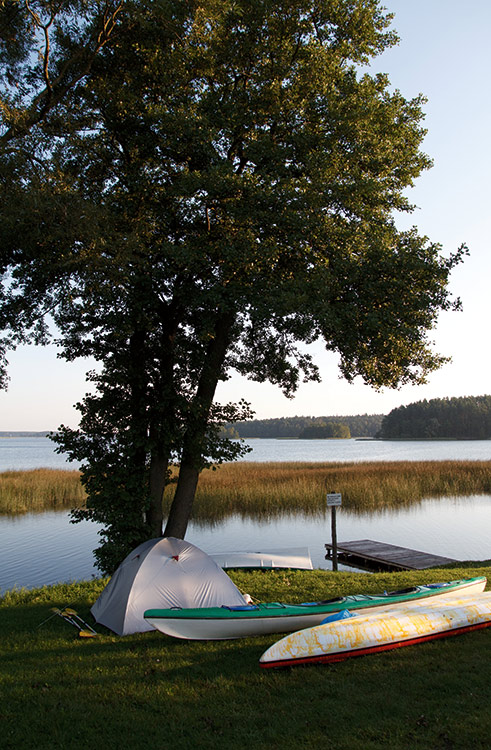 Lying to the west of the main cluster of Mazurian lakes, the Krutynia waterway is over 100 km long. It strings together several lakes and zigzags along scenic low lands. This is a well-paddled route; so, sorry, you won’t be filming Discovery World. And since it’s a one-way lane, there’s no map reading or arguing about where to turn left. You just let the gentle current do the navigation. However, on Lake Mokre (from Zgon to Krutyń) the current sometimes picks up enough strength to make the water surface a bit choppy and stomachs slightly queasy. Other than that, the most dangerous thing you might encounter is the psychotic swans that get hysterical if you inch too close to their feathers. On the whole, it’s plain (and relaxing) sailing, making it a popular outdoors pursuit for the whole family. Yes, that reads “kids are welcome” and they tend to have a fab time and want a replay.

If you’re gamed for the extended, multi-day expedition, the common starting point is at Sorkwity. Most equipment rentals would propose a seven to eight day program that ends at Ruciane-Nida. Those who fancy roughing it out (but why?) can camp along the route. There is also a deluxe option where they ferry you back to a comfy hotel at the end of each day.

The zero-planning required day trip suits me perfectly. An unofficial village for canoeing day-trippers is Piecki, a one high street settlement plastered with “Kajaki” rental signs. If you get there early, like I did once, you’ll find most rentals busy kitting out the bigger parties. Around 10.30am is just nice. After selecting the route, expect to be bundled into a van before being dropped at your chosen starting point. About four hours later when you’re done, simply call the rental people to come and retrieve you. But what to expect of the four hours? Sheer relaxation. The current does most of the work, so no-one will complain of over-exertion. The shallow waters are so clear you can make eye contact with the fish and study the weeds. Being at the eye level of the river and meandering in slow mo, Mazury looks totally different  from the one as seen through a car window.

Yes, this is one hassle-free adventure in nature that even a committed city slicker can pull off. It isn’t a National Geographic expedition but it’s still loads of fun.