family80 foodie11 going out6 leisure2 nightlife289 Powiśle126 Shopping56 weekend132
Background Brief Even in a country that has embraced reviving its historic industrial landmarks, the transformation of the Elektrownia power plant has been nothing...

One year after it first opened for business, join us for a look at how Elektrownia Powiśle has redefined how Warsaw eats, works, drinks and plays…

Background Brief
Even in a country that has embraced reviving its historic industrial landmarks, the transformation of the Elektrownia power plant has been nothing short of spectacular – a point affirmed by its recent award from City Hall as the capital’s best new example of “Commercial Architecture”.

Built first in 1904 to a design by Englishman William H. Lindley (the brains behind the city’s waterworks), the coal-fired power plant superseded all that had come before to supply Warsaw’s electricity. 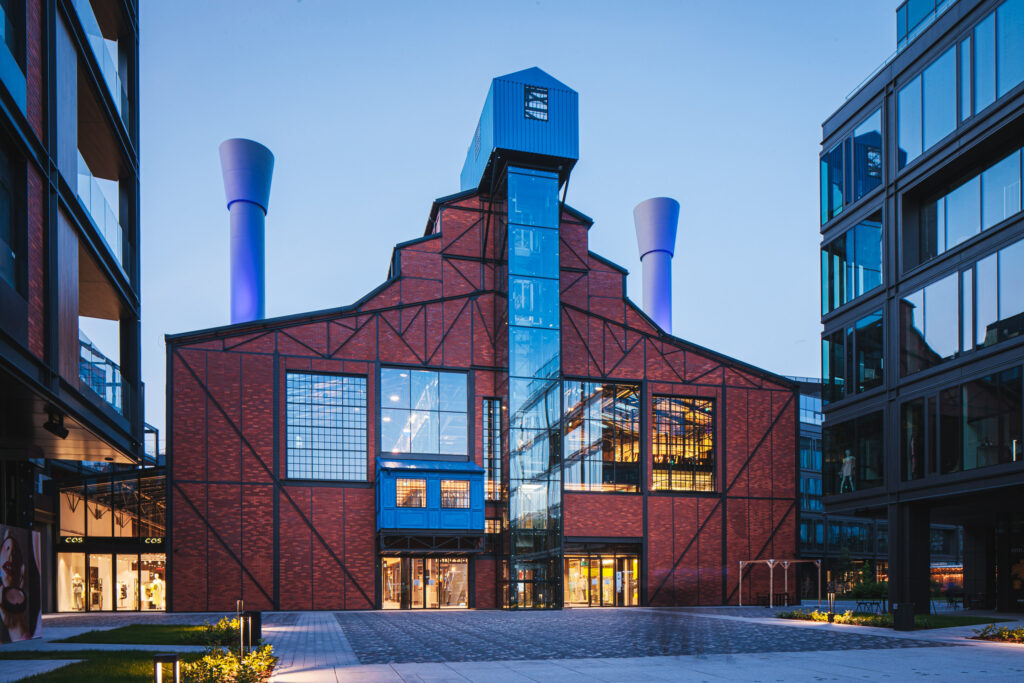 A starring role in the 1944 Warsaw Uprising followed, and whilst the building recorded copious damage, it was again up and running by April of the following year – rising even further in importance, in 1955 it was hooked up to supply the Palace of Culture & Science with electricity.

Decommissioned around about the turn of the millennium, a tender renovation has retained over five-thousand original elements such as pulley systems, cranes, ladders and service boards, and this attention to detail has given Elektrownia Powiśle a sense of character that is noticed by all.

Architecture & Ambiance
At Elektrownia Powiśle architecture and ambiance move in concert with each other to create an experience fired via the seamless mix of the past and the present.

Staggering in its dimensions, you explore a complex that has been strikingly restored to feature a delicious combination of period details, original brickwork, hefty steel fittings and acres of glass – with each unit signposted by its own customized neon, it’s a place that gleams and glitters and is delicious on the eye.

Moreover, it’s as enticing from the outside as it on from the inside. Overlooking a pristine plaza interspersed with water features and billiard green lawns, it is a project that fires the imagination with its super-cool aesthetic. 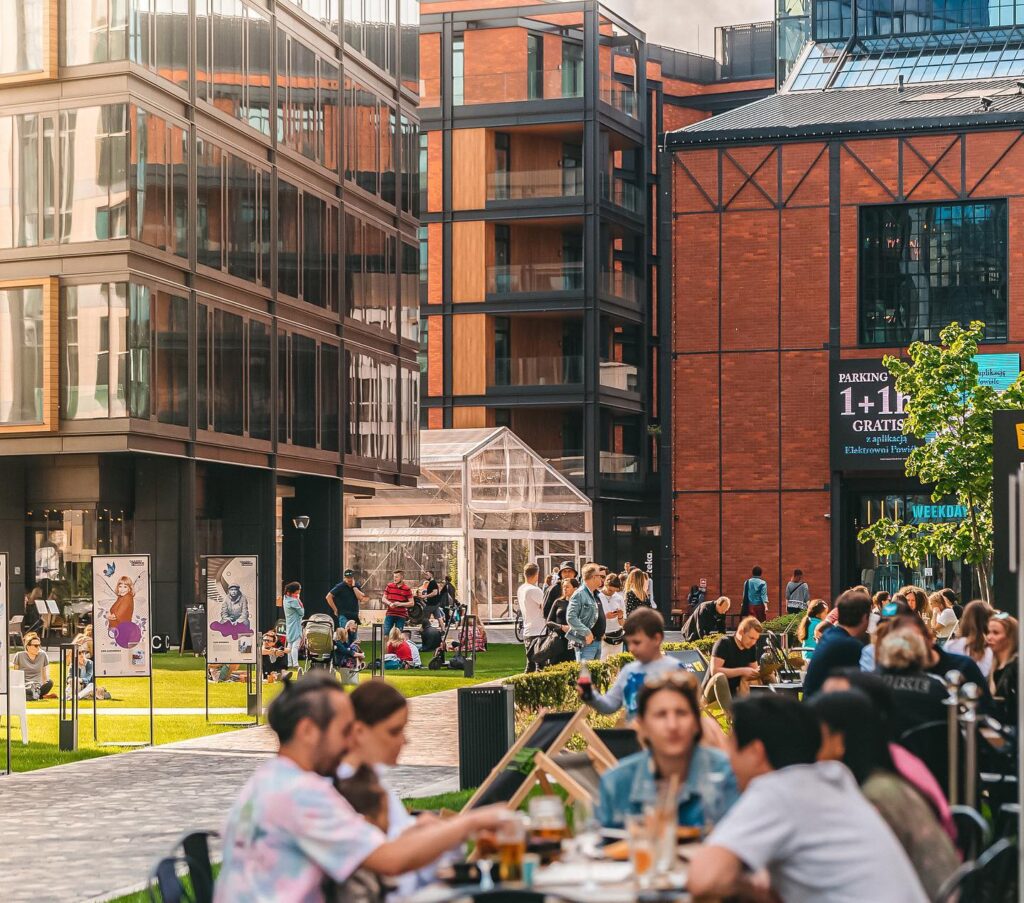 Shop Till You Drop
A non-standard retail offer was always one of the founding pillars of Elektrownia Powiśle’s strategy, and this is precisely what’s been delivered. Easily navigable, tread down wide, post-industrial corridors to peruse stores that cover a high-impact selection of on-trend concept stores, clothing labels such as COS, Napapijri and Urban Outfitters, and ultra-hip units such as paper specialists Wariackie Papiery. 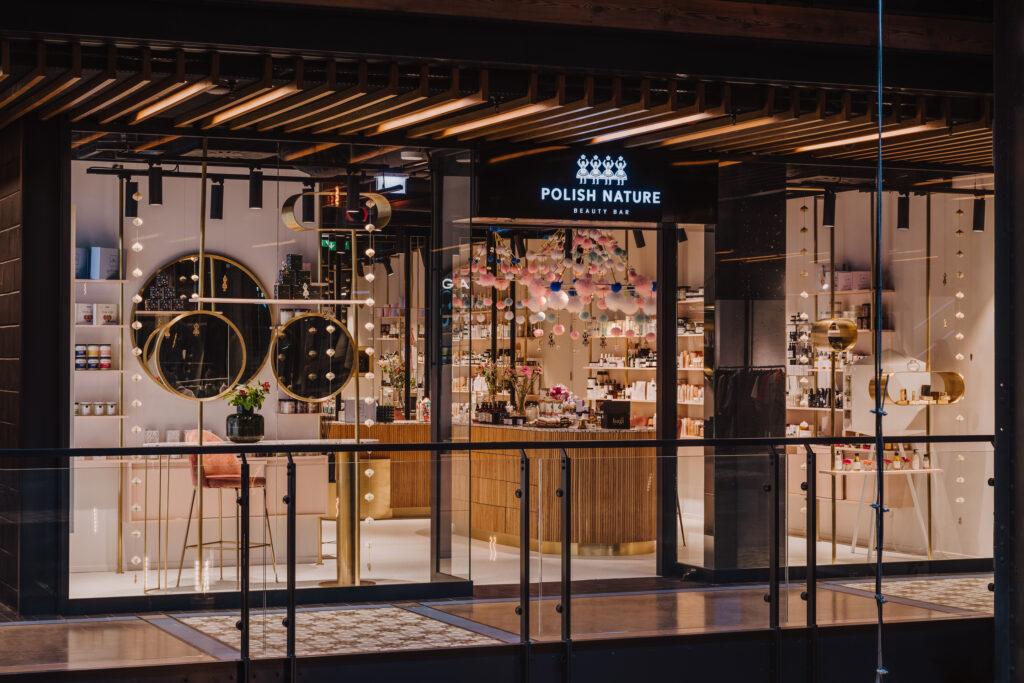 Key, however, has been there emphasis on Polish brands, and this manifests itself by way of swanky boutiques representing some of the country’s best-known, internationally acclaimed designers: for instance, elegant fashion from Paprocki & Brzozowski, classical shoes from Balagan, quirky socks from Skarpetoholik and stunning jewelry from Orska.

Keeping Cultured
As Warsaw’s social life picks up the pieces from the disruption caused by you-know-what, so too do Elektrownia Powiśle. Returning with a BANG, this means a busy summer program of events ranging from ‘slow’ festivals to book fairs, children’s festivals, fashion fests and much, much more. 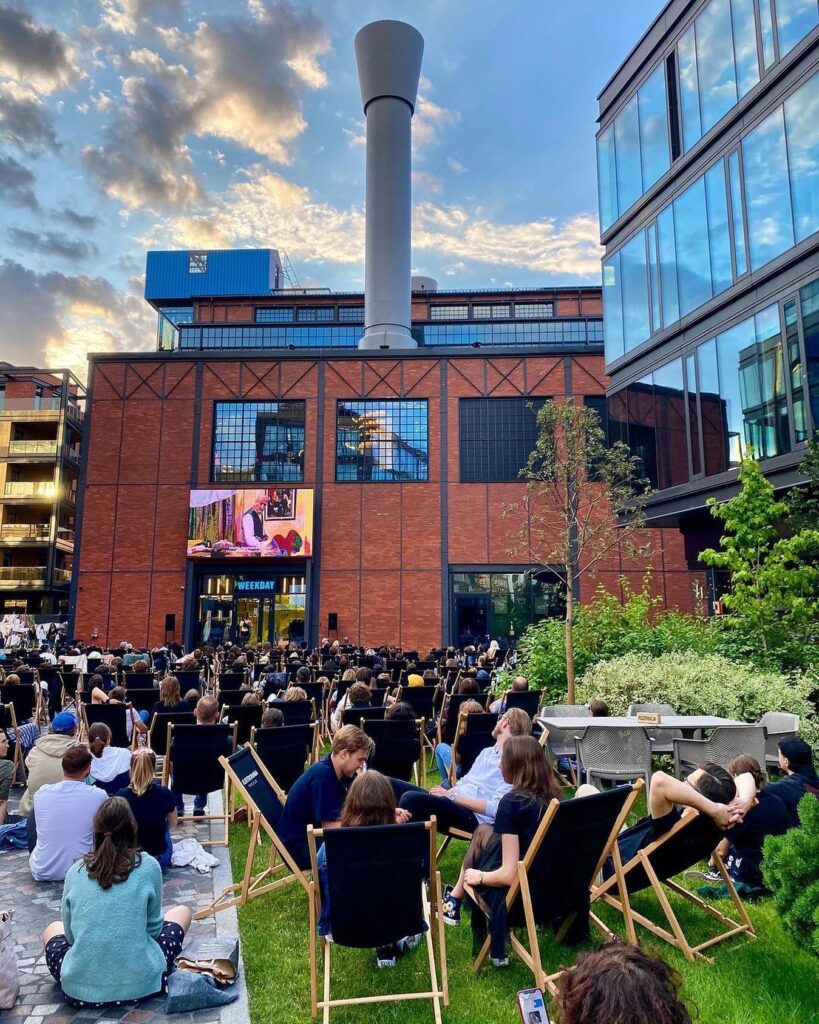 Moreover, expect also a generous slice of the piazza to be handed over to a sea of deckchairs widely spaced in front of a giant outdoor cinema screen – more than just film, find it dedicated this year to screenings of Euro 20 / 21 matches. Likewise, the food hall also promises to screen these for fans of all nations.

Going Green
Feeding into Warsaw’s reborn love of farmers’ markets, the weekend only eco-minded Plonoteka market is now a Powiśle staple that has become ingrained in local life. Giving space only to 100% certified vendors, the choices range from freshly picked fruit and veg to tough-to-find herbs, weird soft drinks, preserves, rare regional beers, top quality cheeses and everything else you can imagine in between. The inclusion of Plonteka in the Elektrownia Powiśle portfolio serves to make it the complete experience.

Stay Beautiful
And doing so is easy at Elektrownia Powiśle. Reserving the entire top level to beauty solutions – both male and female – this one-stop, catch-all has matched up to its ambitions by providing Warsaw with a series of options ranging from the male grooming experts at Izba Lordów, new fangled cosmetic treatments from Beauty Skin, regenerative treatments from Marta Bem’s Balance & Beauty, and a comprehensive – almost bewildering – choice of niche Polish beauty products from the aptly named Polish Nature Beauty Bar. 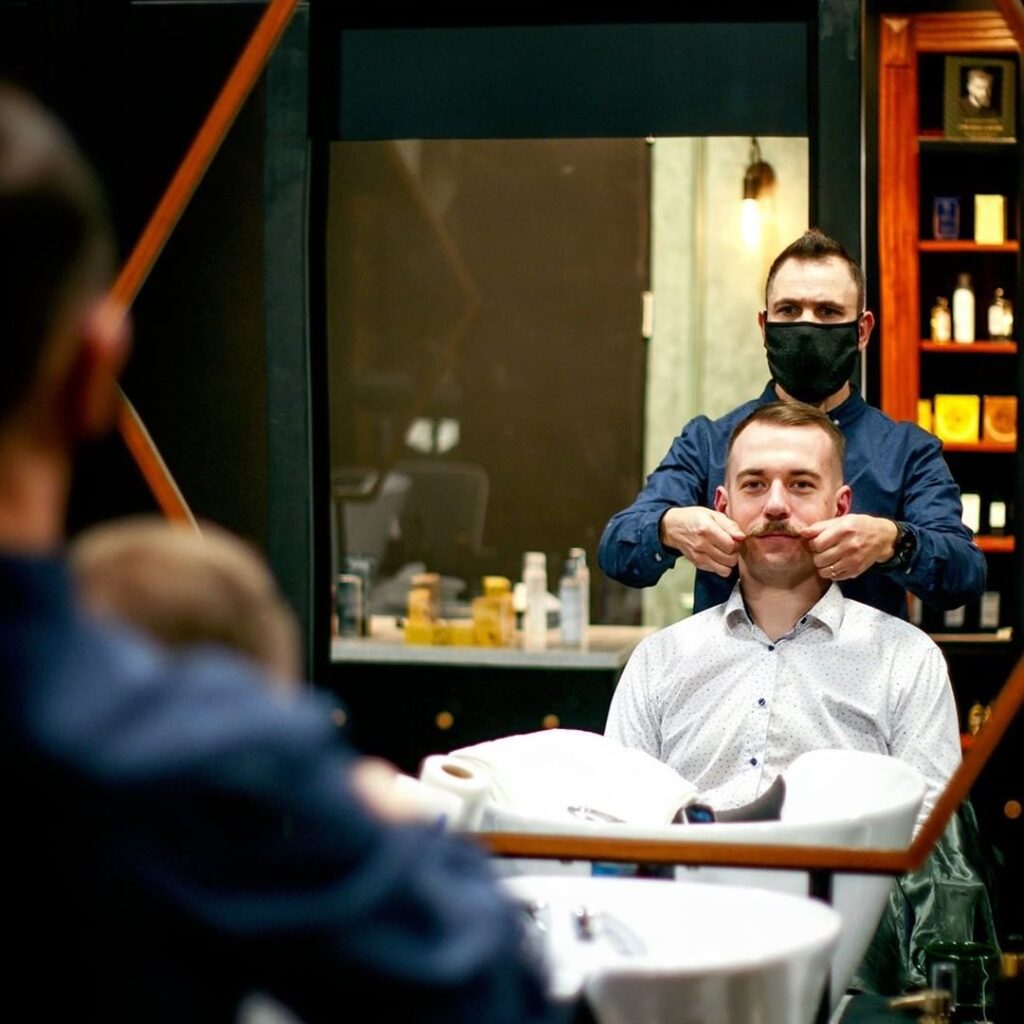 Fed & Watered?
Though featuring some notable sit-down restaurants, the biggest triumph is a food hall that conspires to bring a 360 view of global street food tastes. Though notable for its stringent hygiene standards, should you not fancy eating in, then do so outside – either in the fresh air or inside a huge marquee that’s been well sealed from any inclement summer weather. 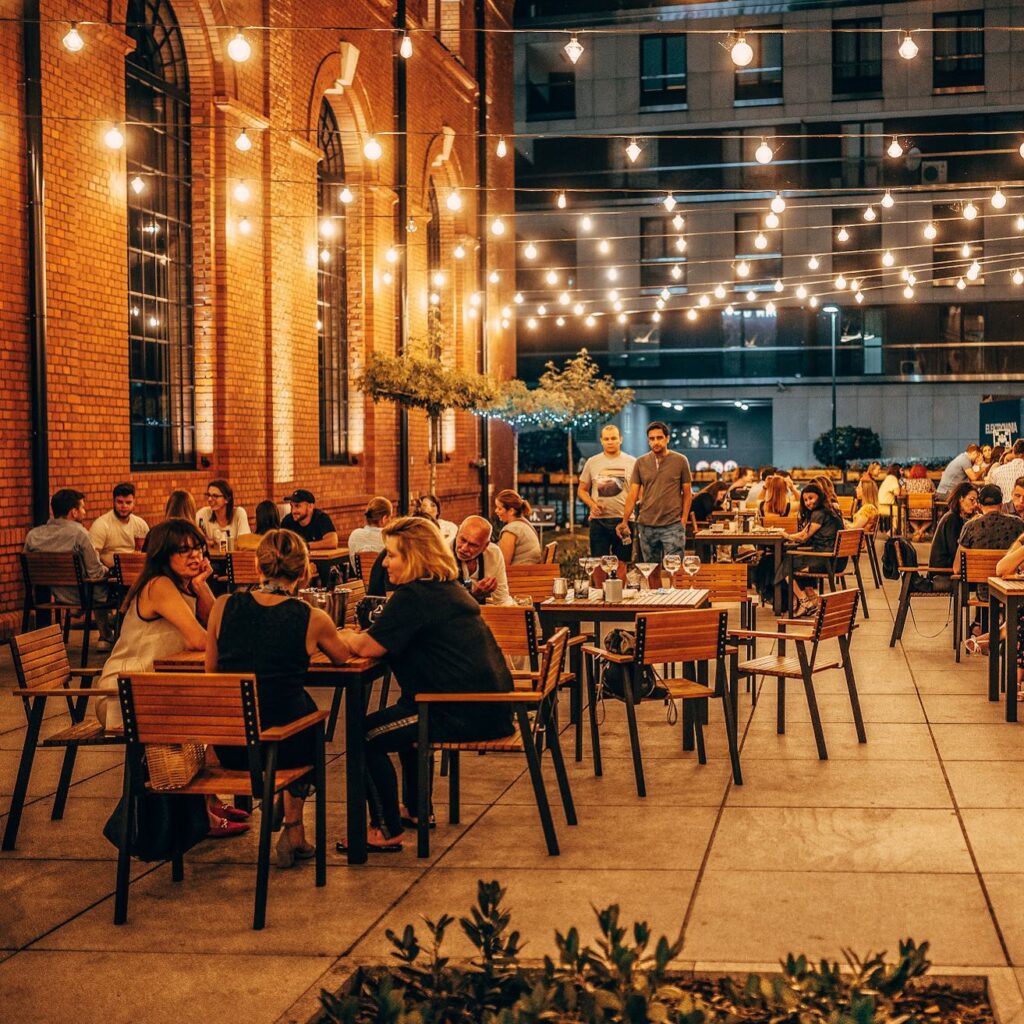 But drinks are every bit as important here as the food. In the hall, choose between a craft beer vending station or the two principle bars that bookend the complex: Centrala Bar at one end or the more cocktail-driven Kandela at the other. Both have become stalwarts of the complex.

Good To Know…
At Elektrownia Powiśle, fun is not a contrived concept, but something that is rife and encouraged. Relax, explore, etc. And doing so, enjoy the details and the setting to the max – scope out the random works of art, snap yourself at one of their insta points, check out the different views offered at various recesses of the building and, even, take a selfie in the toilet – they’re really quite something! 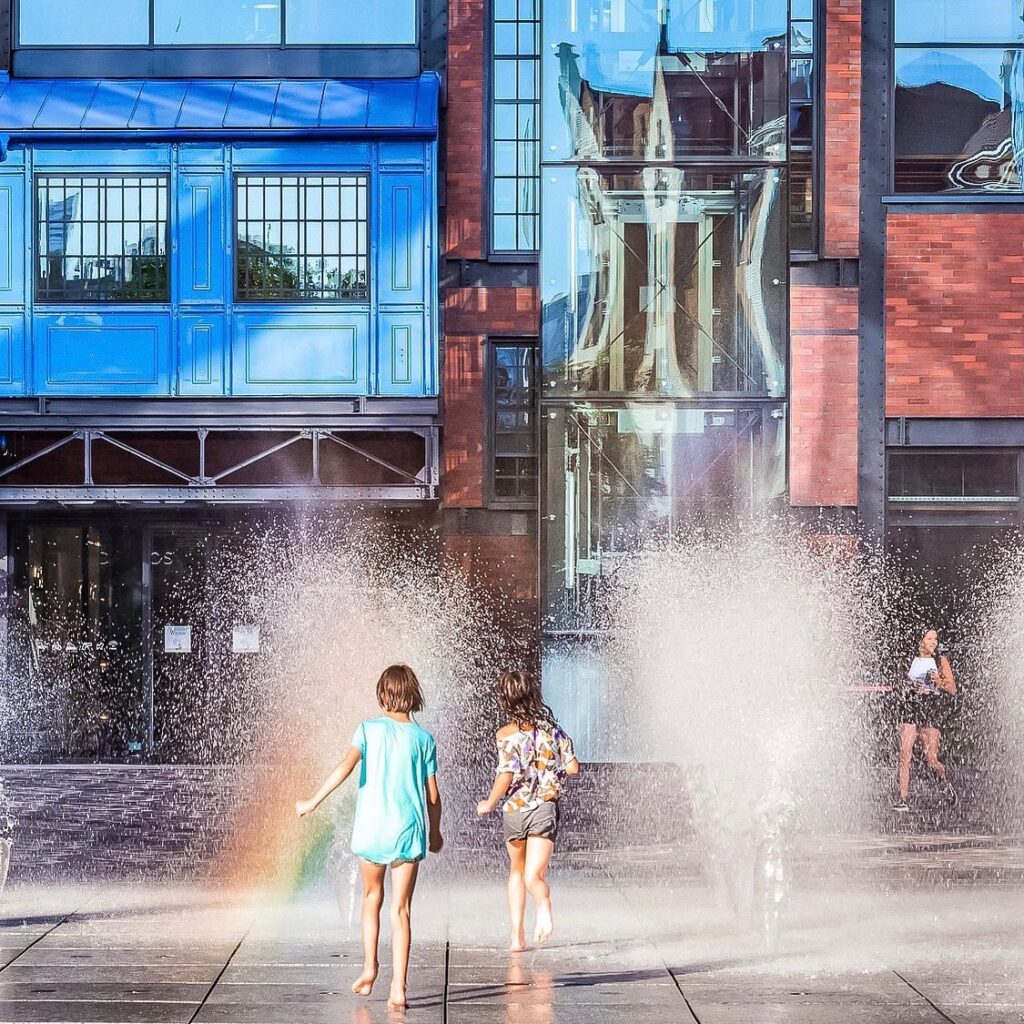